posted on Apr, 12 2005 @ 03:25 PM
link
I noticed the giant mural in the UN Security Council Chamber while reading a news story about Japan's bid for a permanent seat. I'd like to see a large, clear picture of it and maybe dissect the symbology behind it, but can't seem to find any larger than these.


The mural is by Norweigan painter Per Krohg (1889-1965). Can anyone find a larger photograph of the mural, or any art students describe the contents of it?

www.un.org...
A central feature of the Security Council Chamber is the oil canvas mural painted by the Norwegian artist Per Krogh. It depicts a phoenix rising from its ashes, as a symbol of the world being rebuilt after the Second World War. Above the dark sinister colours at the bottom different images in bright colours symbolizing the hope for a better future are depicted. Equality is symbolized by a group of people weighing out grain for all to share.

The picture in the 360 degree quicktime rotation is a bit larger but not much, I couldn't find much in the way of pictures of it. Hope this helps.

from the un.org site

The Security Council Chamber was a gift from Norway, designed by the Norwegian architect Arnstein Arneberg.

A central feature of the Security Council Chamber is the oil canvas mural painted by the Norwegian artist Per Krogh. It depicts a phoenix rising from its ashes, as a symbol of the world being rebuilt after the Second World War. Above the dark sinister colours at the bottom different images in bright colours symbolizing the hope for a better future are depicted. Equality is symbolized by a group of people weighing out grain for all to share.

The blue and gold silk tapestry on the walls and in the draperies by the East River windows features the anchor of faith, the growing wheat of hope, and the heart of charity.


from that site -- you can get a better picture
www.un.org...
edited to add -- Para -- sorry to repeat your info -- had this all typed out and had company stop in for a minute and when I hit send you had put it in also.

posted on Apr, 12 2005 @ 04:24 PM
link
Thanks para and justme, unfortunately that image isn't really clear enough or big enough to get the detail I'm after, and it only shows the bottom half.

You can see lines of dark figures lining up behind the phoenix, perhaps moving into a doorway/opening behind it. The phoenix itself appears to be on a mount of earth with what looks like machinery or a tunnel network underneath, and perhaps a larger tunnel leading out of the mound to the left.

On the left side are figures rising out of a pit, with the uppermost figure, a woman, holding onto a rope held by a male figure outside the pit.

In the middle left foreground, there is a figure which appears to be perhaps wearing armour and perhaps holding a parchment in its left hand.

Middle left background is a dark-skinned man or child dancing.

Middle right in the background appears to be someone kneeling before a red figure.

In the right foreground appears to be a tomb-like mound with a dead(?) man standing atop it and another figure to the right of him and in the tomb itself.

Right backround appears to be a man tending a rearing white horse.

Above the phoenix I think I can make out a child sitting at the feet of two figures.

You could make some biblical Revelation connections to "hell and death" giving up their dead, and the "pale horse".

Maybe also some reptilian connections with the tunnels underneath. The figures lining up and going into the doorway reminds me of H.G.Wells story about the Molochs living under the earth and feeding on the humans above.

Need to see it in more detail to really get a grasp of it.

This is the best that I can do with current images.

Looking for others atm. Will edit and post if found.

Edit The one two posts up looks good. Playing with it now.

Edited for image being too large.

Most disturbing of all is the dead floating up into the region of the living, and the tunnels underneath the mound. You can see on the right that the dead are tethered together with a line.

The people behind the phoenix appear to wear the costume of many nations. I can make out a man wearing a turban, and maybe even a Mexican sombrero (sp?).

On closer look, the man on the mound appears to be a soldier perhaps, and behind him can be seen artillery and a bayonetted rifle.

In the top right above the horse appears to be an observatory.

The very top seems to be a depiction of a bright, Nirvana-like scene.


Anyone want to take a stab at some religious/NWO symbology?

Nice that this is what the UN has as a mural.

I have never liked the UN. NATO is alot more respectable.

now what i would like to see is; a in depth detailed analysis of the possible sybological meanings of this particular mural

i know it could be harmless and all; but i have a gut feeling theres something fishy about this Mural...

id like to find out what it all means

dead center, directly above pheonix appears a couple, and what i expect is their offspring.

im stretching here, but this 'offspring' might have something to do with that pheonix.

you guys know where this is going, but who knows. also, check over on the right! - "behold a pale horse"..

the bottom half of the mural hidden in darkness is curious too. i would really like to know what those slithery caverns are. but the chains can only symbolize slavery.

posted on Apr, 13 2005 @ 08:46 AM
link
The 'mound' that the phoenix stands on could easily be interpreted as a globe, as in the Earth, with a cutaway showing tunnels or machinery underneath...or is it just me?

The phoenix is cited again and again as being a part of illuminati symbology, although actually proving the symbology of a society that is little more than shadow and rumour is naturally a dubious endeavour. Some websites claim that the original Great Seal of the US depicts a phoenix and not an eagle.

educate-yourself.org...
The Phoenix: this is one of their highest military and spiritual symbols. If you see a German eagle, too, this is a huge sign. Certain companies will use a phoenix as their logo, especially red on black, or the reverse, this is a huge sign, since the Illuminati use many resuscitation rituals in their training, where the person is brought into a death, or near death state, then "resuscitated" and told that Baal, or some other entity, "gave them life" and they owe their new life to him and the group. Thus, the phoenix is a huge trigger and symbol.

Make of it what you will...

I've seen the images of the Denver Airport murals.
Denver Airport's Ugly Secrets: Is it more than an airport?
Denver Int. Airport Underground
Again, very creepy.
"Something rotten in the state of"...Denver?

posted on Apr, 13 2005 @ 09:24 AM
link
ok, after staring at the 'caverns' a bit longer i think im seeing a big crocodile. its kinda heiroglyphic looking, but the shape is there. long body, short legs, snout, and the givaway; a long serpentine tail that extends beyond the hole in the ground, and wraps around the leg of the shadowed character in the mid-left looking like hes picking an afro.

there are other details above the croc that i cannot make out. regardless, this isnt the first telling of reptile life just beneath the surface.

I've also noticed the murial recently, and it struck me as creepy too. Strange how we see things like this that will go by un-noticed by the public.

I've still yet to find a picture that shows it in enough detail, all the temporary pic links in this thread seem to be dead.

posted on Aug, 13 2006 @ 05:04 PM
link
I saw this mural for the first time on TV the other day and the words "Masonic" and "NWO" jumped into my head immediately and then i forgot all about it until i saw this thread.

Every picture tells a story but this one would be hard to decipher.


thanks for bumping this, I've never seen the tread and will save it to explore later.

And here's the pic you linked to, very good find for this thread. And please come back and post on ATS, you seem to have lots of data in your brainpan and can share the good stuff with us. Thanks again. 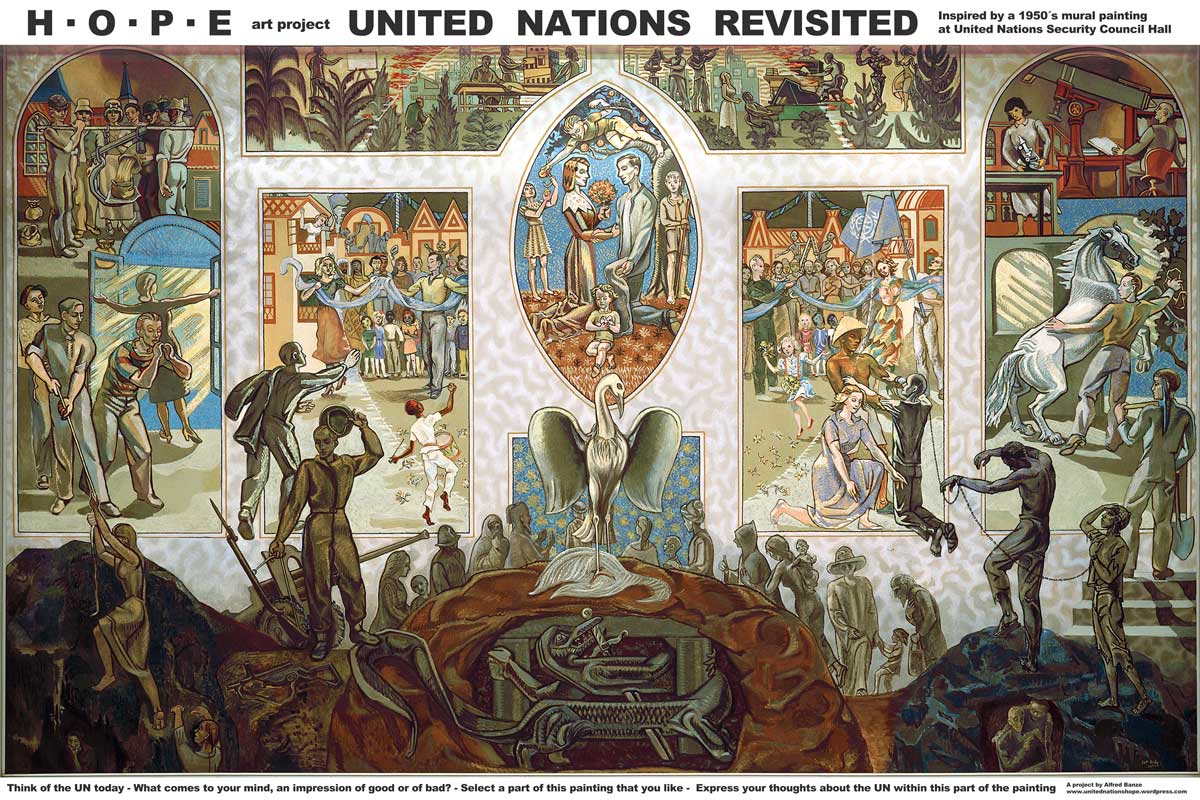