originally posted by: shooterbrody
That half ass vp lied on the TODAY show this morning.
"They've been ordered".
Dirty liar.
After the interview aired, the white house clarified they HAVE NOT been ordered.
The contracts to create rhe tests will be awarded over the next 2 weeks.


Nothing but lies from these people.

By the time the tests are out everyone will have had Omi already!

lol, that's exactly what I was thinking. The surge will be over, everyone will have had it, and thus have natural immunity, and some with "super immunity", and the tests will be pointless, just another reminder of how fantastic Joey is at president.

"Never underestimate Joe's ability to # things up" -B. Obama

posted on Jan, 13 2022 @ 02:44 PM
link
So is Biden like the personal shopper for Federal government now?
Can he get me any discounts on my electric bills or new appliances?
He has ZERO authority to spend money aside from his personal uses as President.
I doubt Joe needs a billion tests for himself but you never know.

Do not forget those that have natural immunity do to T Cells found in the cold corona virus, people are walking around with the most powerful immunity money can buy and this mother F, keep pushing the useless jabs.

And they do not want people to know that they could be immune from the beginning.

Apparently, the tests have been ordered from companies who do not manufacture anything. It appears that one company received 190m for 14m tests. This company is a vodka importer who, as Burr says, "got into the PPE business in 2020." In fact, it would seem the established test manufacturing companies are being ignored in favor of non manufactures, but it's okay because our government has been bailing out the larger manufacturers to ensure they don't shut down.

At the end Burr asks the lady representatives how many of the tests detect Omnicron. You can tell they were not prepared for that question.

The questions about the tests begins at 1:22.

Edit: After some thought, my best guess is that our government is paying 190 million to a vodka importer to round up 14 million tests that are sitting in warehouses around the nation. Does this sound right?
edit on 13-1-2022 by Dapaga because: final thought/question

posted on Jan, 13 2022 @ 09:48 PM
link
The manual for Biden's 1 billion test kits shows the science behind these tests. This has been the left's testing strategy all along. 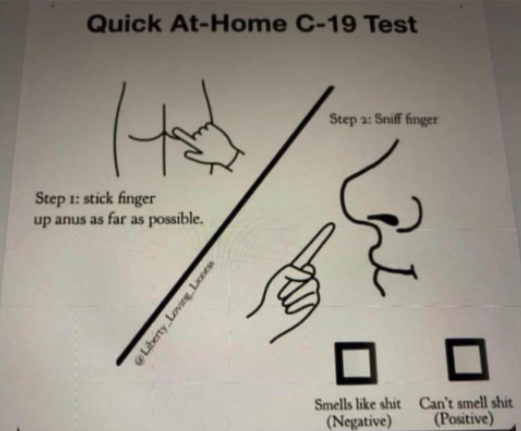 Its just so he can say see what I did...

I swear we have toddlers in charge.

originally posted by: putnam6
The manual for Biden's 1 billion test kits shows the science behind these tests. This has been the left's testing strategy all along.

I need a print out of that for work.