page: 1
35
<<   2  3  4 >>
log in
join
share:
LoneCloudHopper2
+15 more
posted on Jan, 13 2022 @ 02:47 AM
link
USA Today Life has been defending pedophilia as something "misunderstood." They are promoting the idea that pedophiles are in need of the protections of a minority group. The Post Millennial reports that USA Today Life has been retitling an article and removing tweets of this nature.

USA Today attempted to reframe the controversial topic of pedophilia as something that's "misunderstood." A majority of the piece brings up how child molesters complicate the public image of pedophiles.

'USA Today attempted to reframe the controversial topic of pedophilia as something that's "misunderstood." A majority of the piece brings up how child molesters complicate the public image of pedophiles.

One of USA Today's sources, Dr. James Cantor, in December 2018 advocated for pedophilia to become a sexuality that's treated the same as general LGBTQ+ advocacy.

The USA Today piece cites the controversy between Old Dominion University and Dr. Allyn Walker, who talked about "destigmatizing pedophilia" and referred to pedophiles as "minor-attracted people (MAPs)," from last year. Walker resigned from their job with the school in the fallout from an interview they gave to pedophilia advocacy group, the Prostasia Foundation. 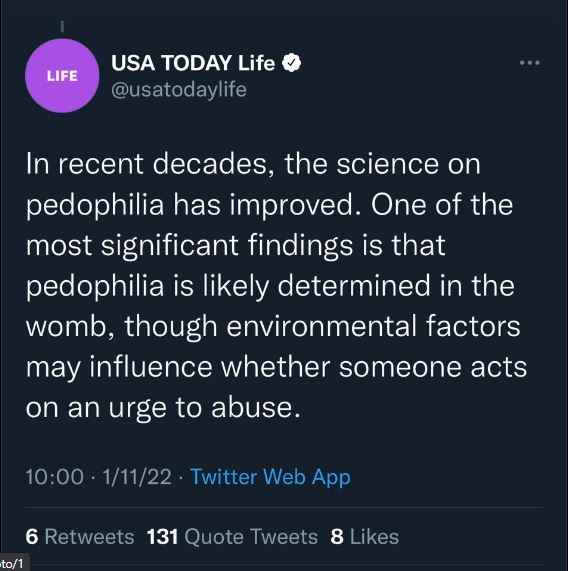 If this particular insanity accelerates, laws may start passing in Blue cities/states punishing caring parents and child abuse opponents with "hate crimes" for speaking against pedophiles. How long until open pedophiles are invited to schools to explain themselves to your children? And don't tell me this isn't going to happen. If you've been paying attention, you can see common sense and humanity have little in common with the corporate media cult/Mass Formation Psychosis.
edit on 13-1-2022 by LoneCloudHopper2 because: (no reason given)

How in da # would they know pedophilia is likely to develop in the womb? Isn’t it more likely as traditionally thought that it is a perversion developed over periods of traumatic abuse etc.? I mean they didn’t crawl into a womb and ask the poor kiddo questions so wtf?


8 people liked this?
Where in thee hell is the down vote button when ya need one?
edit on 13-1-2022 by Brotherman because: (no reason given)

They seem to be arguing that it's genetic. Therefore, pedophiles can be seen as 'cursed' in some sense, and are therefore victims in need of protection. The insanity knows no bounds.

Sounds like a bunch of horsecockerey, it’s about as genetic as Jeffrey Dahmers desire to eat gay men after brutally murdering them.

Good point. Genetics may be a factor, but such illness likely develops due to some kind of abuse that went untreated.

Ok, so does this mean that life begins in the womb?

It seems all these deviant behavior are about never denying your impulses no matter what. "Do what thou wilt". And they have excuses to justify it too.

posted on Jan, 13 2022 @ 05:16 AM
link
Jesus has left the chat....
Every single day there is a new headline that makes me shake my head more at the absurdity of it. Has human consciousness been infiltrated by harmful entities? I'm asking in all seriousness and I'm not even a religious or spiritual person but how else can I explain what appears to be going on in the world right now?
I will not coddle the " misunderstood " emotions of anyone who sexually harms a child. Holy political correctness gone wrong with a side order of frankenscience, Batman.

So? It’s developed in the womb, but a person’s sexuality/gender is a choice?

Wish these f’rs get their story straight…..

I know y'all are going to jump on me for saying that, but honestly if as a sum up I should make a judgement for myself:
if it leads to more awareness, gives us a explanation why some act on it,
why it happens so often often from people you'd never expect,
how we can teach the kids to be smart about it, make them stick together, never leave your friend out of your eyes when you're out,
that it's not normal, for no reason ever should another grown up besides your parents see you naked or touch you, not in a pic, or video, not in real, ever

Then I guess, we need to really talk about from case to case to how it could have been avoided and what exactly the individual story behind it was.
Because genetic doesn't mean we have to accept it as fine, that's not how life works. People overcome their genes everyday. To some degree of course. But at the same time we don't hunt down and abuse everybody who's addicted to nicotine or coffee, beat the obese nearly to death and shame everybody who has the audacity to have red hair.
That is not to say I'm apologising, if there's a victim that's aweful and should never have taken place.
Just to be clear.
But somebody like Jerry from Cheer, he 19 in obvious emotional distress making advances asking for sexual favours etc. But kind of a kid himself, mentally driven by something he himself doesn't even recognise for what it is.
You put in a box with a guy who has a porn production company, with stolen and bought kids in his cellar, where they live hell every day.
So we really got to keep differentiating what we're actually dealing with. I think the public has made it very clear that is not something society will ever accept.
If it's genetics and purely lack of impulse control we got to talk about how one afflicted with such can live savely in our communities.
So if anything like that pops up that person gets a choice, chemical castration, surveillance of online activity and you see a therapist.
Because being gay is different too just saying, by the power of the magic words: consenting adults in love.

So I don't know where this conversation will lead to, but it's up to us where we want to go with this.
Just saying I don't want this! Doesn't make it go away.
Just like every other genetic predisposition, you have to make a choice. Can you live with it?
I mean there will always be horrible immoral people. But I bet there are those too who feel ashamed, helpless, abandoned by getting aroused from children. And as a society we have a responsibility to help them not ever acting on it.

There is ZERO conversation to be had about this.

They are Fn sick and should be put down.

Same with anyone advocating or supporting their insane bs theories.

“likely” begins in the womb. Sure.

Wait a generation and we will know the answer.

Oh! And encourage everyone who wants to be a MAP to come out in the open for their branding and splaying.

We can learn the new tally every morning on sunrise.

To act on it is wrong! No child should ever be victimized like that by an adult. I don't care why an adult did it. There was a choice made, and it was the wrong choice. And now you have some kid who can go on and use that choice to excuse other horrible choices they may make. It perpetuates a gallery of wrong choices and evils throughout society.

I don't need to understand it. I only need to know that it's evil and will perpetuate more evil the more we allow it because "it's understandable now".

It’s already in our schools on our TVs and pushed in our faces. Hell you have misguided hairy legged Adam’s apples men in drag reading stories too toddlers. You have shows that absolutely applaud degeneracy. So many have pointed out prior to the fall of all great civilizations they throw morals by the wayside.

I personally say burn it all too the goddamn ground and let the ashes fall where they may. But who ever restarts try and get it right this time. Because what we see right now is all wrong!


I've been wondering the same thing. This actually applies to a past thread of mine on mass demonic possession works.

There is no scientific study I am aware of that it begins in the womb. The facts have always shown that the vast majority of child molesters were molested as children themselves. The argument then becomes how much blame is on society for a lack of justice, or on parenting for a lack of psychological counselling. Ultimately, we are all responsible for our own behavior. Our society is not set up so that if someone with attraction for children seeks help they will be exposed and have the police called on them. No, they have resources available for confidential help. They can receive help psychologically (by counselling) or spiritually (through religious confession.)

If compassion and wisdom is not enough to compel such people to seek help, then 'stigma' is. The public knows pedophilia is evil, and we don't pretend otherwise. If a pedophile fears being seen as a monster, or feels shame for their secret feelings, then counselling can really help them to handle it. It's not that society doesn't care about them as individuals in need of help, as the resources are there. If these resources are not enough to fix them, then there are medications. If they act on it, then there are prisons. Children come first.

So from my view, there is nothing here that needs fixing, other than a need for greater awareness of how widespread this problem is. Parents need to be aware, and beware--and it's usually someone close and trusted who abuses a child because they feel they can get away with it. Society does NOT need to become more empathetic of pedophiles for any reason I can see. Society does and should fear them. And those inflicted with such an impulse should seek the help which is provided.

The only thing that needs change in my opinion is that those who act on it should receive much harsher penalties than they do currently.

I'd actually agree with the death penalty for molesters if I trusted the so-called justice system. But I don't.

Believe me, in person I'd have you apologizing for that disgusting remark. I would die fighting this degeneracy tooth and nail. I've had a personal issue with child abuse for a very long time now. I don't turn a blind eye to it like a great many people do.

As for burning society to the ground, that's so insane I'm not sure if I'm willing to respond to it again.

posted on Jan, 13 2022 @ 08:10 AM
link
I saw the post and the article and I honestly became enraged. I have always tried to find truths in things, and that includes mental illness and alternative thought, but in reality there simply is no good reason or explanation as to why anything sexual should be connected at all to a child other than they were created from two people having sex. PERIOD. What really got me upset besides the obvious is that THIS is the state of our country and our world right now; when we normalize evil, when we accept it as 'social norm' and bury our heads it is always the same outcome that the children suffer. Once they get this mainstream promise you the next will be those that have sex with animals, and we will have 'Animal Attracted Persons' too. Where doe sit end? It doesn't. Genius has limits, but stupidity knows no bounds and we are seemingly living that. I truly hope and pray we as a collective can root out this evil that is gripping us, but I am not very optimistic about it.