posted on Jan, 6 2022 @ 01:58 AM
link
Hello to everyone, i used to be Astronomer62 but the app to facebook when signing in ceased to work so i have rejoined, i hope i haven't broken any rules, and i was never warned or banned during my stay here.
Thornborough Henges were constructed in approx. 3000 BC involving the Winter Solstice, however the date of 21st December would have slipped using the Proleptic Julian Calender to 12th January, below the quote explains up to 2,500 BC when it had slipped to 9th January:-
"So, for example, were we sitting at Bookan at midwinter 2500BC (which by our calendar would be January 9), Orion’s belt would appear above the south-eastern horizon, in the gap between the Firth and Orphir hills, around 4.30pm. Orion’s rising would be followed shortly afterwards by the appearance of the star Sirius, one of the brightest objects in the night sky."
frontiersmagazine.org...
So to look at the area of Thornborough Henge near Masham, UK, at the Winter Solstice on 12th January 3000 BC as the Sun set, the Belt of Orion was rising. link to graph below:-
i.imgur.com...
This is very interesting as not only are the three henges shaped like the Belt of Orion, they are aligned to them, using the Winter Solstice could signify the death and rebirth of a god in beliefs!
edit on AM0731Thu, 06 Jan 2022 02:06:07 -06002022th31amThu, 06 Jan 2022 02:06:07 -0600 by AstroStar because: spelling

I'm confused by the changing dates. Solstices cannot be physically changed. The winter solstice is the longest night (daytime hours increase from this date) and the opposite for the summer solstice (days get shorter from that date)

Our ancestors loved working out our planet's cosmic place, I've been meaning to make a thread on ancestral Puebloans (Anazazi) who were the only ancient culture to calculate solar and lunar movements with great accuracy. They built a city based on the math, mind blowing stuff. Our ancestors played the long game when working this stuff out, literally generational works.

Thanks for posting I love stuff like this and I'm unaware of this particular henge, looking forward to digging later! S+F

posted on Jan, 6 2022 @ 03:05 AM
link
Hi Ray 1990,
Astronomy programs follow the Gregorian Calendar back to 1582 when it was put in place in Rome, however before that programs follow the Julian Calendar that had errors and was too long which means the Equinox's and Solstices slipped through the Calendar, and you have to make adjustments.
One reason why the calendar was changed from the Julian to Gregorian Calendar was this slip, as just before 1582 the real Vernal Equinox was happening on 10th March, not 21/22 March, quote and link below:-
"Julian calendar

The Julian calendar reform lengthened seven months and replaced the intercalary month with an intercalary day to be added every four years to February. It was based on a length for the year of 365 days and 6 hours (365.25 d), while the mean tropical year is about 11 minutes and 15 seconds less than that. This had the effect of adding about three quarters of an hour every four years. The effect accumulated from inception in 45 BC until the 16th century, when the northern vernal equinox fell on 10 or 11 March.[13]
en.wikipedia.org...
Go back 50 years and not many had watches that would hold the time with only an error of 11 minutes and 15 seconds in a year, and the Julian calendar was put in place on 1st January 0045 BC, so a big achievement for that time!

posted on Jan, 6 2022 @ 03:41 AM
link
On the Winter Solstice, The rising Sun shines inside the doorway of Newgrange, as the Sun sets the Belt of Orion rises as it is within half a degree of Latitude of Thornborough Henge.
Newgrange has an open roof box, which we think was for viewing the other star on the Winter Solstice that i study being Sirius, please view youtube below:-
www.youtube.com...

posted on Jan, 6 2022 @ 04:04 AM
link
Orion Correlations can be controversial, however a growing number of archaeoastronomers feel that Thornborough Henge was aligned to the Belt of Orion, below on link are other controversial Orion correlations that need more research:-
www.ancient-code.com...

Welcome back, I enjoy your threads.

Thank you Granade,
In talking to other archaeoastronomers, it looks likely that Loughcrew Cairn in Ireland is aligned to the Belt of Orion
en.wikipedia.org...
Picture below:-
live.staticflickr.com...

posted on Jan, 7 2022 @ 05:28 AM
link
Maeshowe Cairn is in Scotland, and in ancient times 21st December, Winter Solstice would mean sunset the day before where the Sun shines through the doorway to light up the interior of the Cairn, link below:-
www.youtube.com...

Are you aware of the Dogon tribe in Africa? They had knowledge of the twin star of Sirius if my memory serves which can’t be seen with the naked eye and was only relatively recently discovered. They claim extraterrestrials gave them the knowledge amongst some other things... I would link to some info but it’s been so long I can’t remember where exactly I heard this. I’m sure you can find more with your research skills.

Also Thornborough henge is quite some earthworks! It would have been covered in white gypsum and quartz back in the day so would have been quite the site from a local hill or vantage point. Many of the cairns were also covered in similar materials but it seems to have mostly been scavenged from the sites in later periods. Small quantities can still be found around such sites however.

I wonder if the apparent global fascination with Orion has to do with very early sun worship/religion (knowing the solar cycles would have been very important) or was something else going on in the heavens at the time that lead to the obsession with alignments and such as some have speculated?

Welcome back, nice to see you are still here. You always post such interesting threads. Keep up the good work.

Always good to read something besides another Covid or vaccine thread...
edit on 1/7/2022 by wtbengineer because: to add


is aligned to the Belt of Orion

I'm confused. How do you align anything to the Belt of Orion? Please, explain to me.

originally posted by: Direne
a reply to: AstroStar


is aligned to the Belt of Orion

I'm confused. How do you align anything to the Belt of Orion? Please, explain to me.


How ancients aligned beliefs in the sky has a very long history long before the 13th century BC mentioned below under "Parans" for short:-
pubmed.ncbi.nlm.nih.gov...
There are three starts of day to align to at location, Sunrise being the ancient Egyptian way, Previous sunset to date being ancient Greek day marker and the modern midnight, which the Gregorian Calendar is aligned to in 1582, but cannot be used for Thornborough Henge as it is far more ancient.
So to explain previous sunset, i have included link below:-
wintertriangle.files.wordpress.com...

Added to these three points of day start we look at the Cardinal points which are Due East, West, North, and South mentioned below:-
www.buildingbeautifulsouls.com...
There many different beliefs about the constellations and stars, for the Egyptians if the Belt of Orion rose before the Sun then it was thought of as sacred and Osiris:-

Pyramid Text.
I fly from you, oh men, i am not for the Earth, i am for the sky,
I have soared to the sky as a heaven,
I have kissed the sky as a falcon.
I am the essence of a god, the son of a god.
Behold the faithful and loving Osiris has come as the stars of Orion, the beautiful one.
I have come that i may glorify Orion.
My Soul is a star of gold, and with him, i will traverse the sky forever!

So for Jupiter to rise with the Sun within one degree and is on a different orbit pattern to the Earth is rare at location, Indiction means start of the Year in the Byzantine Calendar that many think was finalized on 1st September 0462 AD as quoted below:-
"The Byzantine indiction, known also as the Constantinopolitan or Constantinian indiction, was the only indiction used throughout the roman empire, with the exception of Egypt. When this indiction was first instituted, the beginning of the indiction year fell on the day already designated the first day of the official year for the major part of the Orient since the time of augus tus, viz, September 23, the Natalis Augusti. It was later moved to September 1 during the latter half of the 5th century—most probably September 1, 462–463 (first year of the series). justinian i made dating by indiction mandatory for all legal documents "

So we have the the East used at sunrise where Jupiter is rising with the Sun which is rare within one degree, while if we look at the culminating angle being Due South we find it cuts through the Belt of Orion, which was probably a chosen alignment for the date, astronomy chart on link below when image comes up on screen left click on it to make larger:-
wintertriangle.files.wordpress.com...
Jupiter in astrology beliefs is lucky and would expand good fortune to the alignment to Belt of Orion as quoted below:-
" That title goes to Jupiter, the planet of good luck and expansion in astrology. "
www.bustle.com...
Our own Gregorian Calendar has been aligned to Sirius
earthsky.org...
You may wish to look at Chichen Itza below however my avatar is "Astronomer62" here:-
www.abovetopsecret.com...
Hi Surfer_Soul,
I do deal with ancient beliefs, your comments below:-
"I wonder if the apparent global fascination with Orion has to do with very early sun worship/religion (knowing the solar cycles would have been very important) or was something else going on in the heavens at the time that lead to the obsession with alignments and such as some have speculated? "
I dont comment on ancient aliens only ancient beliefs, so i would agree with the first part of your comments above, i don't have the research material to comment on more controversial material, sorry!

Below i show horizons with the Sun rising or setting on Winter and Summer Solstice at approx time when Waun Mawn was built:- 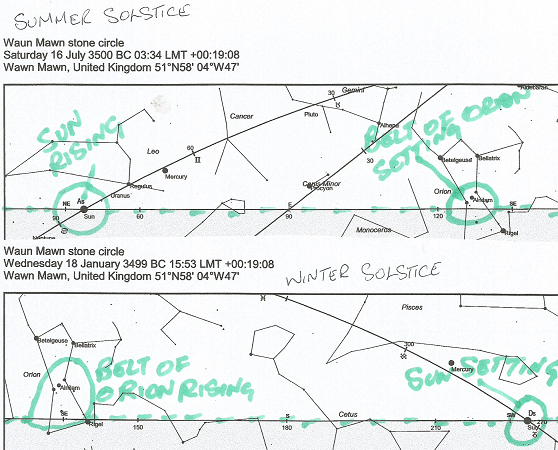