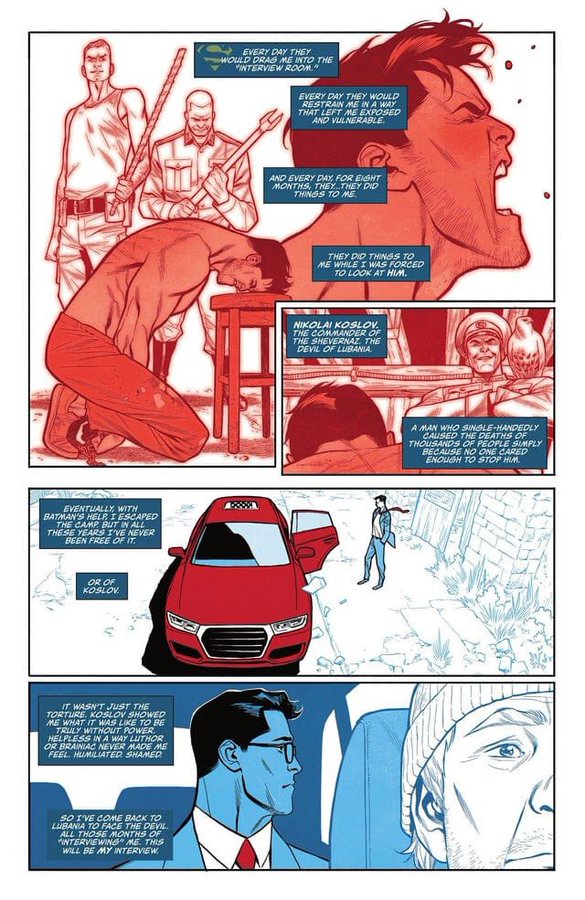 According to 12-Years a Slave-screenplay-writer-turned-comics-author John Ridley, his decision to pen a story for DC Comics in which Superman is implied to have been sexually tortured during one of his previous Silver Age adventures was made in order to provide commentary on his personal perception that “the prevailing culture in this country” is “when bad things happen to people who are traditionally marginalized, there’s this feeling of okay, we get it, it was wrong, let’s just move on.”

Slowly making his way through the now-defunct facility, Superman then begins to reminisce on his time as Koslov’s captive.

“I was held for eight months,” he recalls. “Eight months of starvation, indoctrination, and forced labor. Eight months of being used as a propaganda tool to prove the weakness of the West. But…I’m Superman, right? Superman’s invulnerable. Superman can survive anything. That was the lie I told myself every night.”

It is here that Ridley appears to put a darker, more violent spin on Superman’s time in captivity – one neither seen nor hinted at in the original story, but rather only assumed as a possibility due to the real-world implications of its setting – as Clark turns to confront his own implied sexual torture at the hands of Koslov’s men.

His memory showing him restrained in a bent over position and screaming out in pain from what the dialogue suggests to be some combination of both outright rape and penetretation with foreign objects, Clark continues, “But every day…every day they would drag me into the ‘interview room. Every day they would restrain me in a way that left me exposed and vulnerable. And everyday for eight months, they…they did things to me.”

“They did things to me while I was forced to look at him. Nikolai Koslov. The commander of the Shervernaz, the Devil of Lubania,” he adds. “It wasn’t just the torture. Koslov showed me what it was like to be truly without power. Helpless in a way Lluthor or Braniac never made me feel. Humiliated. Shamed.”


From Bounding in the Comics, link Here.

I'm not sharing this to outrage people. I think there's plenty of rage out there right now. It is important that everyone sees the blatant emulating of our cultural icons. It is not a mere opinion or a matter of preceptive. It is a FACT that our beloved myths are being sabotaged, our strong male heroes defaced. This is the intentional destruction of our cultural identity. Art unites, propaganda divides. This is all about division.

Please stop supporting DC Comics. For that matter, any company which is trying to hard to ruin our culture. It is as deliberate and evil as it is blatant.

We must create new stories, new iconic characters, new ideas to unite us. Together we stand, divided we fall. Don't support those who seek to divide us.
edit on 3-1-2022 by LoneCloudHopper2 because: (no reason given)

posted on Jan, 3 2022 @ 07:19 PM
link
Superman has been captured and brainwashed by Darkseid, what's the problem? Imagine bad people wanting to do bad things to Superman. He's like one of the biggest targets for bad guys in DC. In Justice League Dark: Apokolips War Darkseid depowers Superman completely with liquid Kryptonite and he's rendered powerless. Talk about emasculation.

Who knew people could be triggered by a comic book.

originally posted by: grey580
Superman has been captured and brainwashed by Darkseid, what's the problem? Imagine bad people wanting to do bad things to Superman. He's like one of the biggest targets for bad guys in DC. In Justice League Dark: Apokolips War Darkseid depowers Superman completely with liquid Kryptonite and he's rendered powerless. Talk about emasculation.

Who knew people could be triggered by a comic book. 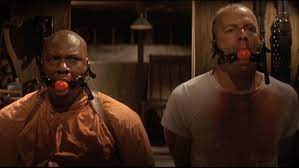 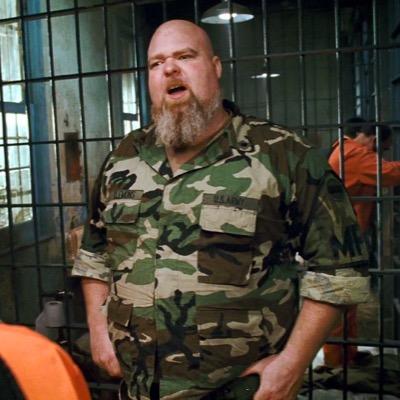 One more thing that Superman has gone through. He's been killed, saw his dog die, etc and so forth. I think it's been proven time and time again that while Superman may be near invincible. He is still vulnerable to certain things. The whole superhero premise is placing the heroes in impossible situations and seeing how they react. Sometimes they overcome.... sometimes they do everything right and still lose. Sometimes bad things happens and they come out forever changed. Not every story has a happy ending.

posted on Jan, 4 2022 @ 02:08 AM
link
Sounds like Superman is falsifying a trauma, fabricating a story that never actually happened, in order to gain sympathy.

It could also be interpreted as Superman's desire for some sort of revenge-rape.

Superman says, "So I've come back to Lubania to face the devil. All those months of 'interviewing' me. This will be MY interview."

Revenge for the sake of revenge. It's not about justice. It's all about payback for Superman.

Good lessons that all children should be taught.

posted on Jan, 4 2022 @ 02:25 AM
link
I dunno from the last couple thought bubbles, it kinda sounds like Superman is gonna do some raping himself.

Please stop supporting DC Comics. For that matter, any company which is trying to hard to ruin our culture. It is as deliberate and evil as it is blatant.


You're aware our culture is based on raping and pillaging? First you invade, then you rape and pillage. It happened a lot in North America. If anything, this comic is taking a page out of European/North American culture and showing you the reality of conquest. You can definitely find videos online of American soldiers sexually assaulting Iraqui POWs.

It's a blatant attack on masculinity and our culture. This was my argument. If you disagree, just say so. Don't act like you can't read English.

It's a nonsense statement.

Well that's your opinion. And I disagree. I just see it as another in a long line of stories where Superman is taken down and subjugated by a villain in a long list of villain's. I think you are making a mountain out of a mole hill.