Betty got Boosted shortly before her death

This is a screenshot of the alleged article from crownriveredia. The link itself seems to have been scrubbed, so I have no way to link to the source. It is claimed there was an article that the screenshot was based on. 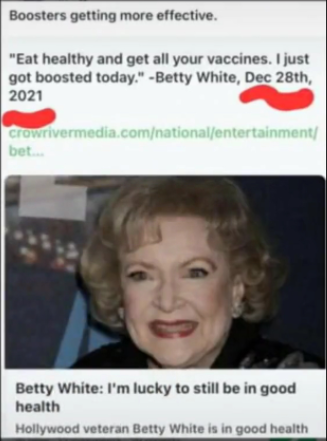 Based on vaers data, there is a small increase in deaths on 7 compared to day 6:

Twitter user claims she was boosted a week before her death

Interesting theory, but not a lot of facts at this time.

My opinion is that it is coincidence more than anything, if in fact she did recently receive the booster shot.

Ms. White has had failing health over the last 5-10 years. This is known and has been reported on several times over the years. Her seeking out the vaccine in a comprised state make sense.

Of course that's your opinion. I literally guessed that's what you were gonna say the second I saw you replied. How could I possibly have predicted that?

Vaccines are the leading causes of coincidences these days. The thing is, just because an old person dies, doesn't mean it's natural causes.

Of course that's your opinion. I literally guessed that's what you were gonna say the second I saw you replied. How could I possibly have predicted that?

Vaccines are the leading causes of coincidences these days. The thing is, just because an old person dies, doesn't mean it's natural causes.


Correlation is not necessarily causation.

Edit to soften my response. We need to wait for more facts to appear if in fact Ms. a white recently had the booster and that the cause of death was specifically from known vaccine side effect and not from her failing health. This is a theory and it will either prove out or not.

I do believe that there is enough evidence to pass the RCT .
Now , away with your mantras .
edit on 1/2/22 by Gothmog because: (no reason given)

originally posted by: Gothmog
a reply to: MDDoxs

I do believe that there is enough evidence to pass the RCT .
Now , away with your mantras .


You are welcome to that opinion, but I disagree. There is also not enough evidence of causation at this time to say that Ms. White died of the vaccine.

It is not valuable for us to jump to conclusions, but rather we should ask good questions to help us find the the truth of it all.

I think age and her health issues seem like very strong contributors to her passing.

I feel less than happy discussing this subject when Ms. White brought so much laughter into the world.


This is a screenshot of the alleged article from crownriveredia. The link itself seems to have been scrubbed, so I have no way to link to the source.


So there's no evidence linking Betty White to that quote other than a claim on twitter ?
I wonder where the quote came from because it wasn't posted on Betty White's own twitter account.

Leave the woman to have died in peace ffs.

It was entropy that caught poor Betty and caused her demise not vaccines.

But hey'ho anything to further the antivax madness is obviously the colour of the day.
edit on 2-1-2022 by andy06shake because: (no reason given)

In general, I'm against censorship and against companies deleting online content simply because it's dishonest, but there is so much fake content out there from anti-vaxxers and from people who just plain want to make mischief that it looks like a purge is inevitable if we're ever going to get out of these constant lockdowns.

Where is the logic in the theory that receiving a booster kills you?

She was 99 years old. Lots of elderly people have received a booster and not died. Lots of 99 year olds die from many different things, because they're 99 years old.

I'm down for looking at facts and statistics, but this is just a lazy attempt at finding something to back up your theory.

Last I heard of Mrs. White was that she was well and looking forward to a grand 100 year birthday celebration.

Betty White’s last tweet proves how excited she was for 100th birthday: See

My 100th birthday… I cannot believe it is coming up,” she wrote, before asking people to pick up the latest issue of the magazine just three days before passing away of ‘natural causes’.

No evidence. I agree. But I also don’t believe in coincidence.

Can sheer willpower keep patients alive in their dying hours?

When someone knows they are terminally ill, they may see their birthday as a goal to reach for, meaning they just hold on until they reach another milestone. This may be the same for religious holidays, as there is an increase in cancer deaths around Christmas, and a Passover effect in the Jewish community.

With little explanation why the death occurred.

Betty White's 100th Birthday Movie Special Will Move Forward — How and When to Watch
Betty White died on Friday at age 99, PEOPLE confirmed, just two weeks before she would have celebrated her centennial year


——-
Sorry. It is a strange coincidence that a seemingly healthy person with a meaningful and productive life, excited, tweeting out about her birthday dies two weeks before her birthday.

posted on Jan, 2 2022 @ 06:17 AM
link
She was a century old FFS. And she was pure class until the end. What amazing woman and what an absolutely wicked sense of humour she had. One of the greats who had an exceptional innings.

So. Yeah. Seems Mrs. White and company were marketing her 10th birthday. Just a short honest statement concerning her cause of death by her estate would be appropriate in this case.
edit on 2-1-2022 by neutronflux because: Added and fixed

Like i suggest entropy is a thing and 99 years is a fair age to reach.

everything you need to know is contained in the above sentence.

A shame but fact of life for the time being anyroad.

The thing is if the so called vaccines were actually killing people and the majority of people have taken them... don’t you think we would see a lot more deaths?

All the people claiming the jibby jabs are lethal injections are disinformation purveyors. Just because they are completely useless, don’t stop you from getting it or passing it on, doesn’t mean they are designed to kill either.

Who knows the long term affects? That’s the real issue.. or that they are in fact just one step on the road to a further agenda..

Possibly, give them half a chance all the same, only the second of January.

However if there is no post-mortem examination the cause of death may remain inclusive.

I don't know her feeling's or families on the matter but at 99 they might not wish to see their granny gutted when the cause of death is more than lightly old age.

Our natural inclination is that.

But apparently its not yours.

Why do you think the booster had anything to do with it?

AND what proof do you have that she just received a booster especially since she was in the group who was first eligible for the vaccine to begin with?
Meaning she probably received her first dose early last year, her second dose a month later and a booster some time in late summer or early fall if she followed the schedule.
So where did the information that she just got boosted come from?
Considering how very private she was about her personal life.
They didn't even say what she died from and her health has never been a public subject of discussion. So just where did this nugget come from?

And don't choke on it but where did anyone ever get an idea that the booster can cause death?

You don’t actually die of old age. You die of one or more the myriad of issues and complications that your body can no longer deal with effectively in old age.