NFL lineman, NFL Hall of Fame coach, TV sales persona, game announcer, and multi billion dollar video game master (is there any other term??), john Madden, has passed away at 85, according to ABC news.

While sad news, there is so much more that coach brought to the world and one trait that I have tried to follow, be your genuine self everywhere you are.

Yeah football, blah, blah, but I would have loved to sit down and eat some turducken with coach (that word is even in autocorrect!!)!

Instead of a death announcement, let’s look at the NFL films movie trailer and share a smile or two as this icon over several decades faces that mortal coil.

RIP probably talking with Stabler, Tooz already but Al might be at the club downstairs... 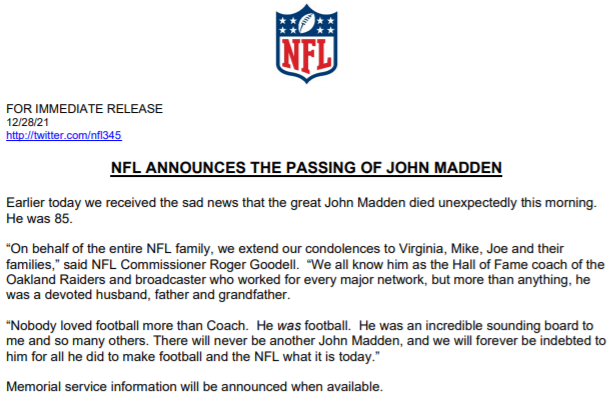 Im having a Mandela moment

I was sure he died a few years ago

posted on Dec, 28 2021 @ 07:56 PM
link
Some of my favorite Madden moments are him in The Replacements doing the announcing.

Uh, Desmund Tutu just passed… put that in your Hand Rolled PuffNStuff and see what ME arises!!

It is kind of confusing but I watched some CBS special on Madden this past weekend (puts up the Jackie O question of “leaving on your own terms”), which was compelling to sit through. It looked so seem less from this side but it wasn’t.

Tbh, I tried Lite beer but returned to Guiness because of those commercials!!

It is kind of difficult to be sad about this announcement as there are so many others that bring smiles to your face!

A good reason to call it “a celebration of life”!

Anyway I was never much of a gamer, but always enjoyed his game calling for sure. At least we still got Al Michaels though I imagine he’ll probably be retiring soon.