Here is wisdom. Let him that hath understanding count the number of the beast: for it is the number of a man; and his number is Six hundred threescore and six.

This disease is effecting everybody in the world

Here is the coincidental match I found in medical literature.


The major hallmark of the disease is the systemic inflammatory immune response characterized by Cytokine Storm (CS). CS is marked by elevated levels of inflammatory cytokines, mainly interleukin-6 (IL-6), IL-8, IL-10, tumour necrosis factor-α (TNF-α) and interferon-γ (IFN-γ). Of these, IL-6 is found to be significantly associated with higher mortality. IL-6 is also a robust marker for predicting disease prognosis and deterioration of clinical profile.

This hallmark cytokine of COVID 19 disease is abbreviated alpha-numerically as IL-6.

IL translated from French to English is HE.

The letter I translated using simple English Gematria is the number 9.

Just a bit of fun with numerical coincidence.

originally posted by: BlueJacket
a reply to: InachMarbank
18 reduces to 9


Not if you turn your screen upside down.


originally posted by: BlueJacket
a reply to: InachMarbank
18 reduces to 9


Not if you turn your screen upside down.


It becomes a Hells Angel.

I think you need to go back and re-read Revelations. Covid cannot be the mark of the beast.

posted on Dec, 27 2021 @ 06:18 PM
link
Kinda reaching, but I get it. Honestly I thought the post was going to be about Vax passports but I get your creative analogy.
Cool post S&F.

originally posted by: orionthehunter
I do not believe it is.


Yea but that's some random video with random power points, as far as the lead up; I strongly believe there is more nefarious stuff to come before a blow back stage, whatever that may be. Then it's on like Donkey Kong, people disillusioned by falsehoods and whatnot's. Eventually folks rise up and do fight for their dignity eventually. All hope is not lost, yet.

posted on Dec, 27 2021 @ 11:45 PM
link
Read it however you want. ITS THE ONLY TRUTH!!!! The BIBLE knew on its own accord about covid!! Ok Got your attention. Not going into all of this is all the (bullsht) truth for the modern era. Please quit trying to make verse this and that fit what is happening npow ok? Believe what you want. But this is sad even for this site

originally posted by: orionthehunter
I do not believe it is.

One will only know after the Abomination of Desolation .

Oh they have side affects that harm a lot of people, heart conditions etc but they are NOT the mark of the beast, even an RF chip would not be though it may become so if it is mixed with what I am going to say now.

IF YOU REALLY want to know what the mark of the beast is then WATCH THIS, it is not just opinion it is based on observation of historical writing and comparison to a very well known symbol sported on the arm (Hand meant arm as well in that original text) and the head by millions of people around the world and perhaps at least once in there lives by over a billion.

The ANTI CHRIST is non other than the Islamic messiah, the Mahdi, he will oppress Christians in the end time by which Islam will thoroughly dominate the world, then the Christ will destroy him and his army's and his followers ALL whom have the Mark of Islam will go into the lake of fire, sorry no paradise for that lot though with Christ there is mercy and he will not throw away good soul's and there are many in Islam that think the darker teachings of there religion are every bit as evil as we think they are though as far as the hard liner religious extremists are concerned whom go exactly by there written belief system those people are Apostates even if they still adhere to some form of there religion.

There is no mistaking it.


But as for the Covid, over in the UK we have a serious emergence of EUGENIC's occurring, REALLY NAZI Stuff I am not joking it is horrible and should have sounded a wake up call to everyone with any knowledge of history and definitely an anti British practice taking place within our own nation.

Before the second world war Eugenics and killing the disabled were a mark of the coming evil and an unknown number of children regarded simply as slow were given lethal injections, disabled people murdered even before the holocaust came to pass.


How dare they abuse our people, how many of these bloody doctors are even BRITISH.

But thanks to the Tory Government unless a patient say's NO the hospital can steal there organs which at there death become property of the hospital, so it IS Eugenics but it is also greed since privatisation of our once proud national institution of the NHS has crept in, been invited by every single government since the 1980's.

I am considering writing to my MP or starting a petition to get this criminally investigated as murder.

Certainly this constitutes failure of duty of care and criminal manslaughter by the hospitals or specifically by the Doctors giving these DNRs on vulnerable patient's, it is NOT About prioritizing patients that entire concept goes against the ethical standards and right's upon which the NHS was founded in the first place and is an utter atrocious abomination for it to be happening right now in the UK, some heads definitely need to roll and the politicians definitely need to do something about it.

posted on Dec, 28 2021 @ 09:54 AM
link
That medical symbol, Rod of Asclepius, or caduceus, reminds me of the Genesis story where Adam and Eve got scammed into eating fruit from the poisonous tree.

Angel number 888 is a reminder to thank the Universe for blessings and miracles that enter your life and trust that everything is always working out not only for your highest good but for the highest good of all.

The Mayans were spot on with their calendar,. It was 2 date's and the second just expired..


originally posted by: orionthehunter
I do not believe it is.


One will only know after the Abomination of Desolation .


And the Temple will have to be rebuilt before the Abomination of Desolation.

posted on Dec, 28 2021 @ 03:52 PM
link
Ok, look here. When you take the mark of the beast, you are knowingly and rejecting Jesus as God. When I got my vaccine, I must have missed that clause in the documentation. If you want the vaccine, great. If not, that's ok too. It's only a 2% chance of death if you catch the disease. The government does not have the right to mandate it, but I will tell you that it is a good idea. Thank God that Trump paved the way to create this vaccine in record time and that Biden saw clearly enough to distribute it quickly. Please don't delete this post because I said that.


(covid 19 maybe, i'm not saying it is or not, strung alongside an agrument like the mark of the beast which deals with the long standing issue of humanities original design to function in a unified field environment, and human dirth charge has taken that away for earth...........for many people this is the beginning of their end, and that is all for them)

Lot wanted a wife, had one, or was not blessed by his soul mate (pyramid builder covenant for a soulmate, events of babel)...........until god resolved that argument (and he was provided a bunch of wives, by the lord god's discernment as was allowed in the matter)........later we learned abraham couldn't reproduce until he sacrified animals, and we blessed then after that by his soulmate.............and he used a parabled of sacrificing his son, but revealed that there was a lamb/beast/snake, there instead.........later his son would marry at his 40th year of age).

and the big surprise was that Moses was given a serpent, but that covenant was revealed to him (9/11 falling man moses)...........and she was called Aaron, and later in the bible, we learn that Aaron adorned herself, with earrings and fine clothing in order to get moses's attention.

(otherwise the taking of wives is not necessarily a work the son of man or a pyramid builder performs in the new testament, its their soulmates performing the function, anything outside of that is a controversy of sin, and viewed negatives.............this is a controversy the taking of wives also maybe a sin, but, the information on the subject is iffy, and not voiced well, someone has to bump the accounts, that is done periodically by some one, but history just deletes it)

The point is, seems like best answer is covid19 is permanent, and its developing, perhaps entirely misunderstood, the relationship between the earth energy grid, and biological magnetic or other resonances, field resonances, wouldn't take much with humanities disposition. So we should get comfortable with it, with covid. 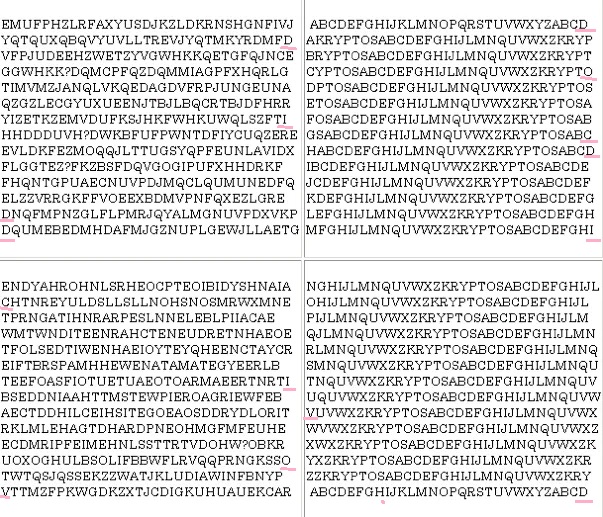 the famous "kryptos" puzzle, with the letters spelling "COVID" highlighted

in the kryptos puzzles, shows you, in the real structure, its bent primarily between the left and right sides

where you can see the word "COVID" spelled.