The Saturn Stargate and its connection to CERN 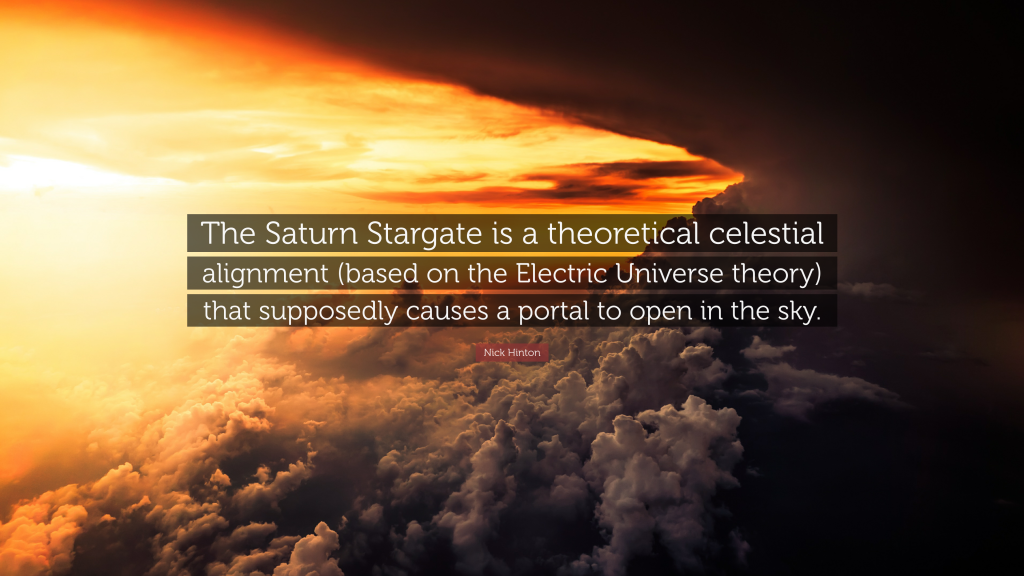 In 2017, I watched the documentary series on YouTube called ‘Discourses on an Alien Sky’ by David Talbott and discovered that the iconography presented in that documentary parallels symbolism in our culture today. The documentary series explains that there was a celestial event thousands of years ago that all cultures around the world witnessed and documented. The celestial event involved three planets, namely Saturn, Venus and Mars, and they aligned overhead Earth and were stationary in the sky. Their alignment formed an 8-pointed star and Mars descended and formed a mountain to Saturn which Talbott refers to as the “Cosmic Mountain”. In his book ‘The Saturn Myth’ David Talbott associates this celestial event with a gateway. He says: “The god “comes out” and “goes on” on the [Saturnian] mountaintop through the “gate”, but he accomplishes this without moving from his fixed abode”. David Talbott wrote his book ‘The Saturn Myth’ in the 1980s and the cover of his book shown below is what this celestial alignment would have looked like. 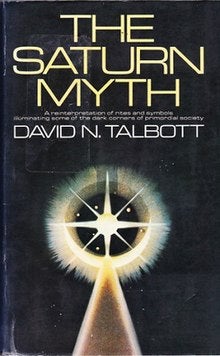 Here is where things start getting crazy. In 1994 (14 years after Talbott published his book) there was a movie created called Stargate. The story of the movie was based on a stargate being opened to another point in the universe. The design of the stargate device in the movie as well as the artwork from the movie was clearly inspired by ‘The Saturn Myth’ as can be appreciated here. The resemblance is uncanny and certainly not an accident, especially in light of the fact that Talbott described the celestial event shown on the cover of his book as a “gate”. The idea of Saturn being a gateway or stargate has become popularly known as the “Saturn Stargate” and was even talked about by David Icke in his 2017 book. In the movie Stargate the gateway that they open leads to the god “Ra” and according to Talbott the god Ra was identified as Saturn. Quote: “A Greek Ostracon, cited by the eminent classicist, Franz Boll, identifies the Egyptian deity Ra, not with our Sun, but with Saturn”. 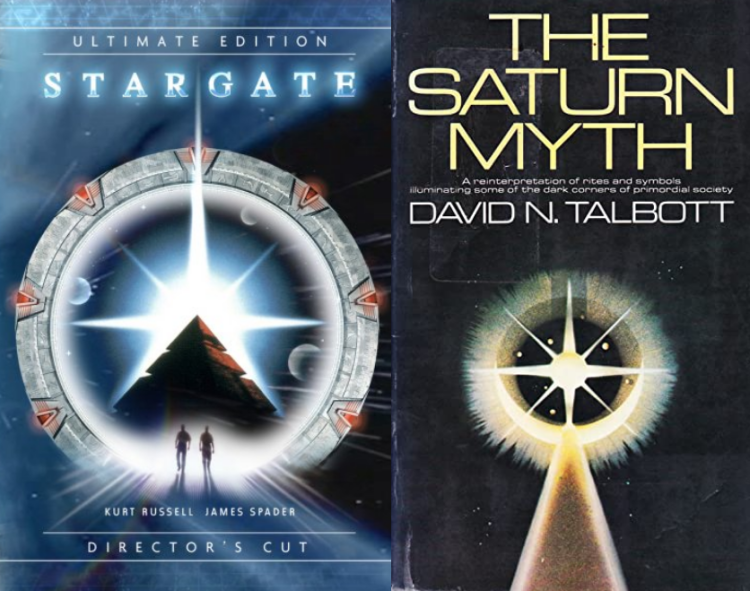 In his 2017 book, David Icke talks about how he believes how the ‘Saturn Stargate’ is linked to CERN. Quote: “I have said in previous books that the Large Hadron Collider, the world’s most powerful particle accelerator at the European Organization for Nuclear Research (CERN) in Switzerland, is in the process of creating portals into other realities. I say this includes a connection with Saturn through which energies and entities come into our reality through a Saturn Stargate or portal to other dimensions”. This possibly has some real truth. I say this because according to Talbott the celestial event that involved Saturn thousands of years ago became anthropomorphized and was represented by the god Atlas. The Saturn-crescent that formed during the celestial event became the arms of Atlas. This is certainly interesting because CERN refers to their experiment at the Large Hadron Collider as the “ATLAS EXPERIMENT” (below shows the celestial event that Talbott talks about compared to CERN and their ATLAS symbolism). 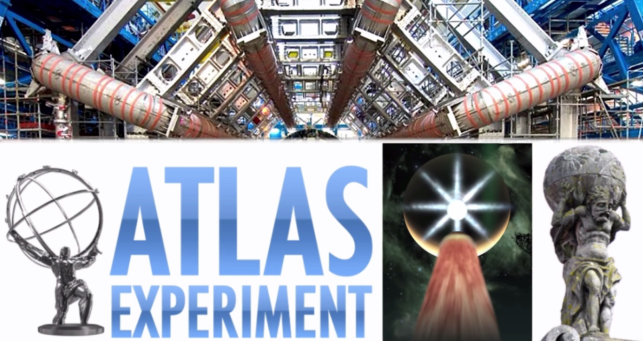 The celestial event involving Saturn also appears to be the basis for the design of the Vatican Courtyard, as shown here. What’s even more interesting however is that there was a movie based on CERN where a large part of the movie was filmed inside the Vatican Courtyard. The poster here shows the movie which was based on CERN that heavily featured the Vatican Courtyard. So, we have two instances of CERN (indirectly) using symbolism associated with the celestial event involving Saturn. One with Atlas and the other with their CERN movie, both featured symbolism that’s associated with the celestial event talked about in ‘The Saturn Myth’. The idea that CERN is attempting to access a stargate or portal that’s associated with Saturn is not only talked about by David Icke, but also by Anthony Patch, who states that CERN is trying to access a portal to Saturn. This all seems crazy, if it were not for the fact that the director of CERN openly stated that they were trying to access gateways, saying: “The Large Hadron Collider at CERN could open a door to an extra dimension and out of this door might come something, or we might send something through it”. CERN also displays what can only be described as portal symbolism in their artwork, as shown below. 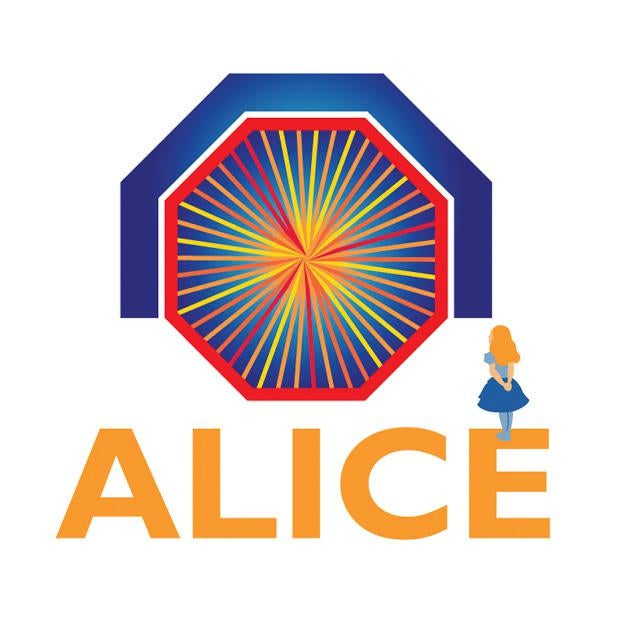 The idea that Saturn is a gateway (that CERN is attempting to access) has no doubt been the inspiration behind the TV references which explore the same sort of themes. For example, in the movie Spider-Man: Into the Spider-Verse, a CERN-like particle collider can open portals to other dimensions. The design of the particle collider in the movie Spider-Man: Into the Spider-Verse was actually inspired by the real-life CMS experiment at the Large Hadron Collider. In the movie, the particle collider opens portals to other dimensions. In the TV series Steins Gate, through the means of Kerr black-holes, the Large Hadron Collider at CERN (SERN) is used to travel in time, and in the movie Cloverfield: Paradox, a particle accelerator tears a hole in the fabric of space and time, opening up a portal. In the video-game Shin Megami Tensei IV, a particle accelerator called Yamato Perpetual Reactor opens portals to other worlds. In the popular TV series Mr Robot, there is a very overt CERN-reference. The CERN-like machine in this TV series was inspired by the Large Hadron Collider ATLAS detector. The machine in that link was created by the character Whiterose and is referred to as a “VLHC” (Very Large Hadron Collider) and is associated with alternate dimensions.
edit on 15-12-2021 by Nathan-D because: (no reason given)

Very interesting. I thought these theories copied stargate but it is the other way around. I hope the Universe is as amazing as we all hope it is.

Saturn signal interrupted. Also a no go.
you are screwed.

After all we do not believe you anymore.

without belief you are nothing.
edit on 15-12-2021 by infiniteMeow because: YBR

posted on Dec, 15 2021 @ 08:47 PM
link
Thanks for putting out a cool post.
When you watch the ceremony they did for this tunnel and a similar one for cern, it is basically a parade of hypnotized drones
and demonic entities emerging from a portal.

Here is an old audio clip from 1992 which gets into this as well. Val was on the edge of this research and involved within that arena back in the day.

Add to this those companies with saturn imagery within their logos and more dots can be connected.

When you believe in things
That you don't understand,
Then you suffer,
Superstition ain't the way

This all seems crazy, if it were not for the fact that the director of CERN openly stated that they were trying to access gateways, saying: “The Large Hadron Collider at CERN could open a door to an extra dimension and out of this door might come something, or we might send something through it”

Do you have a link to this quote?

Sure, it could ultimately be some great leap forward for humanity, but I share the feeling that something wicked this way comes.

What the serious heck was that i just watched?? And that was the abriged version?? Over a damn tunnel??
I thought you were referring to this incident of a mock human sacrifice on CERN grounds.


Europeans are wierd, or got too much time and money, or all of the above.

The tunnel represents the abyss and their attempt to draw forth the being cast into it. Cern is their engine for the portal.

I hadn't seen this videos you posted but they sure seem disturbing.

posted on Dec, 16 2021 @ 01:40 AM
link
full schematics can't be provided due to intelligence of viewer being more than makers of projects... infiniteyawn.

Very fascinating connections and speculations. Thanks for sharing!

posted on Dec, 16 2021 @ 07:39 PM
link
What if the Stargate has already been opened,. Earlier this year Saturn tilted it's ring's towards us and made a opposition with the earth and sun. Now visible in the sky is comet Leonard passing by earth heading past the sun and never to return. Is that the once and only chance of a unique window of opportunity that Prince Charles spoke about...

Another thread on this within days of each other? Weird. As I said before, Talbott has been thoroughly debunked.

Saturn is in opposition every year, just as each planet is. For Saturn it's two weeks later every year due to the orbital dynamics. This is simple physics.


It's pretty cool, since the rings seen edge on almost look as if they have disappeared.


Puzzled the hell out of a certain Galileo.