President BIDEN says Gullible-Dumb Americans Are Why His Poll Numbers Are So Low.


originally posted by: VictorVonDoom
Fact Check Says: This is True.

If it wasn't for dumb and gullible Americans, Joe Biden's poll numbers would be a lot lower.


If it wasn't for dumb and gullible Americans, Joe would be in a nursing home.

Making the last year and a half just a freaky realistic horror movie.


I saw the preview 19 months ago, and so far it's been a pretty accurate representation of this pants sh1tt1ng flick.

Joe was coached on what to say by Lying Chuck.

Let me get this straight, Care...

Slow Joe now says it was all his friend's idea and demands that everyone stop ridiculing him.

We have a president with a middle school mentality.


Democrats must be Soooooo Proud!


No wonder joe's afraid to be in the same building as his troops.

He Is Wearing No Clothes!

posted on Dec, 14 2021 @ 01:26 AM
link
Yesterday AOL mail put an opnion peace in their "breaking news" section. The author said that having narrowly escaped an obvious coup on January 6th, Americans were now "sleep-walking to disaster".
The author did not actually define what she meant by "disaster". The best guess I can make is that she was not expecting the Democrats to win the 2022 elections.

originally posted by: DISRAELI
Yesterday AOL mail put an opnion peace in their "breaking news" section. The author said that having narrowly escaped an obvious coup on January 6th, Americans were now "sleep-walking to disaster".
The author did not actually define what she meant by "disaster". The best guess I can make is that she was not expecting the Democrats to win the 2022 elections.


Even their own propaganda outfits are dazed and confused by the disaster that is SlowJoe.

Though they still can't stop barfing out that j6 insurrection/coupe nonsense.


Sorry AOL, we remember your part in this. 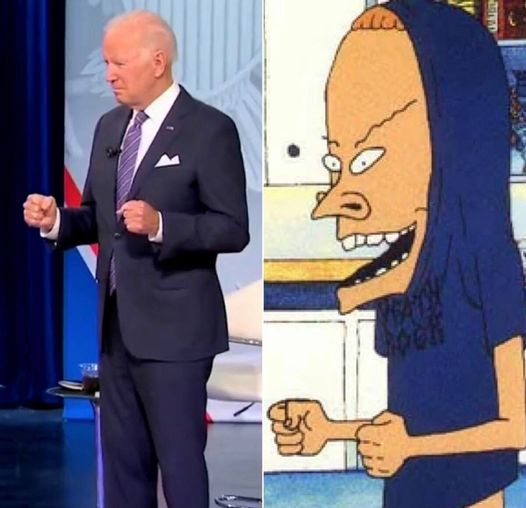 The Moment when the whole world saw a sitting US President

originally posted by: caterpillage
It's the gullible dumb Americans who voted for him.

What about the gullible dead Americans that been voting Democrat since the Clinton era?

Speaking of which, when does Chelsea start throwing her bull # in the ringer? I’m guessing won’t be long now.

What did body-language experts say Joe was doing, during that CNN Town Hall?


I think they said something about him needing TP for his bunghole.

originally posted by: VictorVonDoom
Fact Check Says: This is True.

If it wasn't for dumb and gullible Americans, Joe Biden's poll numbers would be a lot lower.

i for one think they are inflated like his 81 million.

he has lower poll numbers than divorce lawyers and pedo's.

President Biden is taking a page out of an Obama-Biden administration advisor named Jonathan Gruber. Gruber famously said on at least 2 occasions that the "stupidity of the American public"


Fact check: It isn't just Biden who thinks the average US citizen is stupid. Liberals in general are always writing articles about how intellectually superior they are to the rest of American citizens and "proving it" with statistics.

Liberals also claim they have the moral high ground, except their morality is always changing and has zero to do with traditional morality.

If you simply disagree with one of their new morals or political policies, you are immediately doxed, fired, have your livelihood destroyed, social media destroyed, personally destroyed, or at a minimum deemed stupid and ignorant with dangerous thoughts.

Thinking they are superior and always right and always perfect, and the majority of US citizens are stupid ignorant peon masses, is synonymous with progressive liberals and Democrats these days.

Thing is, they are bold about saying how smart and always right they are and how ignorant, stupid, and awful (as in ist/ism) the rest of the US population is.

This is the way it is in the US and if you happen to notice inflation - MASSIVE INFLATION - well you are stupid and it isn't happening.

If you happen to notice out of control crime - well you are stupid to think it isn't only because of COVID. If you notice these things you are stupid, ignorant peons in the progressive liberal Democratic Party playbook.

I'm ready to be destroyed for saying this: but I saw in my local regular grocery a sign that said "in season" and in front of the sign were pears, not organic, not special, just regular pears, $4 each, per pear. But Democrats would say, you are wrong, you didn't see that, you are so stupid, that could not be real, inflation isn't that bad. That is how liberals and Democrats are, and we all better darn well get used to it.

Biden appeared on Jimmy Fallon's "The Tonight Show" and attempted to field questions about his poll numbers.

Fallon asked, "How much do you pay attention to approval ratings?"


Let's go on a trendy TV show in hopes of improving the lack of confidence we're experiencing in the polls that we don't care about.

Face palm!
He's dumber than those that follow him.
🙏❤

'Jimmy, nobody trusts what I say anymore. You know, it's like the American people are just so anxious and they're just a bunch of suckers who will believe anything anybody tells them, right, Jimmy?

That Bold says it all doesnt it... doesnt it Jimmy?

posted on Dec, 14 2021 @ 11:07 AM
link
The only way Biden's popularity is way down is because too many of the record setting 81 million are polling negative.

For poll numbers to be this low, the poll "count" needs millions of people inside the "81 million" corral 🥳️

originally posted by: caterpillage
It's the gullible dumb Americans who voted for him.

Some were dead! Can't blame them, God rest their souls.

What did body-language experts say Joe was doing, during that CNN Town Hall?

This is the approach of the Democrats, they promise free stuff, you know free stuff to people for votes, then they promise that the rich is going to pay for all of it, then they crap on all of those that actually believe the empty promises.

Incredibly this same people that get craped over, vote for the democrats all over again, I guess they do like to be crapped on.

Yes, gullible and dumb Americans voted for him believing what the press told them about what a vote for him would mean, and now they're finding out the hard way how stupid they were.

This is what the evil left thinks of us.