Today I want to tell you a story that most of you do not know, and do not even guess. We've all watched the great movie "Pearl Harbor" many times and remember how at the end of the film Lt. Col. James Dolittle, played by the now controversial actor Alec Baldwin, organizes the first raid from an aircraft carrier into Japanese territory as a response and revenge for Pearl Harbor.

Doolittle's pilots, according to the film, landed in China, some were killed, but most returned home. But in fact, everything was somewhat different. And I want to tell you. what was wrong.

On April 18, 1942, for the first time during World War II, American aircraft attacked Japan on its territory. 16 B-25 Mitchell bombers launched surprise attacks on military and industrial facilities in Tokyo and several other cities. The so-called "Doolittle Raid" was a revenge for the treacherous Japanese attack on the US Pacific Fleet base at Pearl Harbor on December 7, 1941.

The American aircraft carrier group moved to the Japanese coast covertly. But the Imperial Navy patrol ships found her too quickly anyway. As a result, the Americans had to lift their bombers into the air much earlier than planned.

The planes were loaded with additional cans of gasoline, which, however, still might not be enough. After all, the way back for the bombers lay not to their aircraft carrier Hornet, which had already left the dangerous waters, but to the distant airfields of allied China. 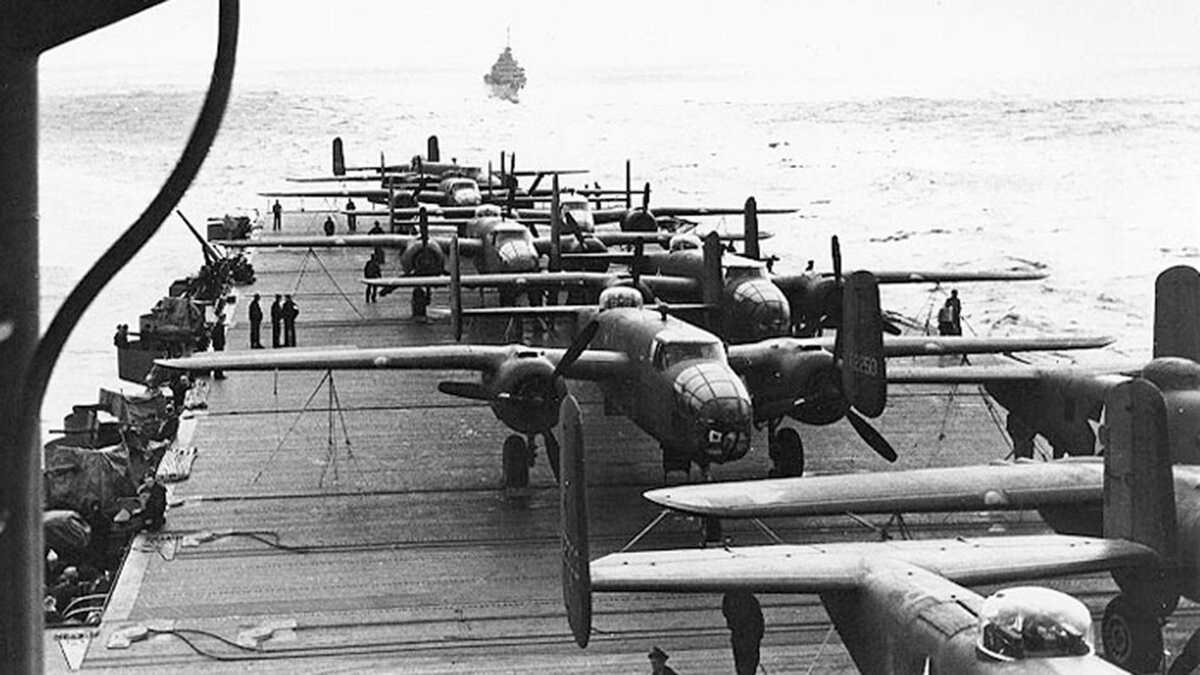 Not all of Doolittle's planes began to break through in the direction of the territories controlled by Chiang Kai-shek's troops. The crew of Captain Edward York, calculating that they could not reach China with the remaining fuel level, decided to land on the territory of another US ally - the Soviet Union. But it was strictly forbidden for American pilots to do this. 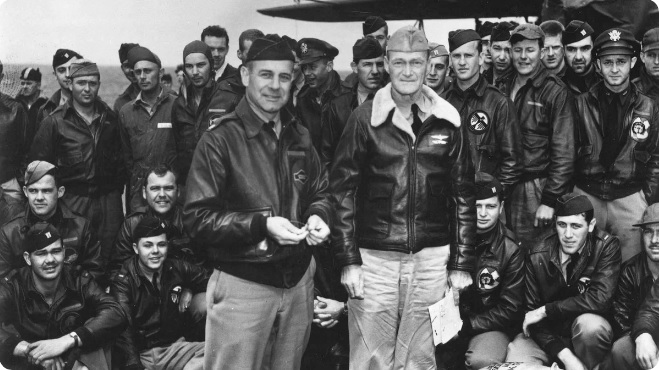 The USSR and the United States at that time did indeed maintain allied relations, but they extended exclusively to the war against Nazi Germany in Europe. Having concluded a pact of neutrality with Tokyo on April 13, 1941, Moscow was out of the armed conflict in the Pacific Ocean and was obliged to immediately intern all the troops of the states fighting in this region that somehow ended up on its territory.

Passing along the Soviet coastline and bypassing Vladivostok, the B-25 of York rushed deep into the Soviet Union in the area of ​​Cape Sysoev, where it was discovered by the air defense forces of the Pacific Fleet. The servicemen, however, did not raise the alarm, mistaking the American plane for the returning Soviet Yak-4 bomber.

Only at half past five in the evening, when an American plane appeared over the military airfield "Unashi" a few tens of kilometers from the port of Nakhodka, two I-15 fighters headed for the attack. However, they did not interfere with the landing of the bomber with almost empty tanks.

The Soviet servicemen were extremely surprised to see five Americans (two pilots, a navigator, a flight engineer and a gunner), but, nevertheless, they were greeted warmly, accommodated and fed. Soon the deputy commander of the Pacific Fleet aviation, Colonel Gubanov, arrived at the airfield with an interpreter.

Initially, the Americans said they had flown in from Alaska. But Gubanov was aware of the Tokyo bombing, and the pilots had to admit their participation in the raid. “I asked if he could provide us with gasoline, and then we would fly to China early in the morning. He agreed, " York recalled in 1943.

But everything turned out to be not so simple. The USSR could not let go of the pilots who bombed Tokyo, and not cause a tough response from Japan, whose positions in the Far East were at that time stronger than ever. On the other hand, Moscow did not want to quarrel with its new ally, who had just started supplying arms and raw materials to the Soviet Union under the Lend-Lease program.

As a result, the B-25 was requisitioned, its crew was interned, and the US Ambassador to the USSR, Admiral William Standley, was handed a formal protest. At the same time, at an informal level, Moscow assured Washington that it would try to find a way out of the current situation that would suit everyone. In the meantime, the American military had to be in decent and comfortable conditions.

posted on Dec, 13 2021 @ 03:10 AM
link
The crew was sent to Khabarovsk, where they met with the commander of the Far Eastern Front, General Iosif Apanasenko, who informed them about the internment. Since then, the odyssey of the Americans began, who were taken on trains, planes and ferries across all Siberia to the Urals and the banks of the Volga, leaving them to live for weeks in different cities and small villages. The US Embassy received regular information on all movements of the detainees.

The servicemen spent eight whole months in the small town of Okhansk on the banks of the Kama River, languishing with idleness. “Four months after we got there, the last of our escorts left, and we lived in the house by ourselves. We were allowed to walk freely around the city. By this time, we had learned a little Russian, so that if we were stopped and asked for documents, we could explain to them who we were. Of course they knew it themselves. Most of the city's residents knew, ”York recalled.

Several times American diplomats were allowed to meet with the crew. In September 1942, they managed to talk with General Omar Bradley, who at that time in the USSR was in charge of the Alsib air route (Alaska-Siberia), through which military aircraft were sent from the United States to the Union.

Upon learning that the pilots were contemplating an escape, Bradley strongly recommended abandoning this idea and not violating the conditions of internment.

The escape eventually took place, only it was not the Americans who organized it, but the Soviet special services.

The situation with the interneed B-25 crew began to change in early 1943. Captain York's wife petitioned President Roosevelt to release the crew, and he, in turn, made a personal request to Stalin. And the Soviet leadership itself began to treat the problem less tensely, first of all, because of the outlined turning point in the war associated with the defeat of the Germans at Stalingrad and the Japanese in the Battle of Guadalcanal.

Nevertheless, it was still impossible to let the pilots go just like that, and the NKVD authorities were instructed to organize an escape for them across the Soviet-Iranian border. At the same time, the Americans themselves had to consider that they were acting on their own initiative.

In March, the crew was sent to the south of the USSR, where they were to work at one of the airfields in Ashgabat. On the train to the capital of the Turkmen SSR, NKVD Major Vladimir Boyarsky, posing as Red Army Major Alexander Yakimenko, managed to make friends with the pilots, and then kept in touch with them on the spot. He soon convinced the Americans that he had entered their plight and that he truly wanted to help them return to their homeland.

“From the first days of my stay in Turkmenistan, together with the border guards, I prepared the Americans to cross the border,” Boyarsky recalled : “The main thing was that they believed that they themselves had prepared their escape from the USSR. For this purpose, about 20 km southeast of Ashgabat, closer to Iran, we equipped a false control and trail strip, supposedly marking the Soviet-Iranian border. "

Boyarsky introduced the Americans to another NKVD officer who was playing the role of a smuggler. That for 250 dollars had to deliver them by truck to the "border", which they had to secretly cross themselves, and then pick them up on the other side.

“You should have seen how in the moonlight, looking around and kneeling in order to crawl under the wire fences of the Russians, the Americans fled to freedom. On the ground, we skillfully created a real situation of illegal border crossing by violators ... ", Boyarsky recalled the night of the" escape "from 10 to 11 May.

Having picked up the Americans on the "Iranian" side, the "smuggler" freely smuggled them through the real border checkpoints, which was not at all difficult to do: after the joint invasion of pro-German Iran with Great Britain in August 1941, Soviet troops were in the northern part of the country and control at the border almost completely absent. Having reached the city of Mashhad, the crew members who had not noticed anything turned to the British consulate, and on May 24 they were in Washington.

Years after the end of his 13-month odyssey in the USSR, shooter David Paul suspected that their entire escape was rigged by the Soviet General Staff and the NKVD. Co-pilot Robert Emmens, however, disagreed with him: “Our escape was real. He cost us every cent we had ... [Yakimenko] kissed each of us as we left him ... There were tears in his eyes. "

Imagine that this escape had to happen the way it had, because Stalin rather wanted to be caught being duped than (caught) red handed by the Japanese.

The charade and make believe towards the Americans to get them home is, I think the only time/example I know where deceit leads to something good.

This and hiding Christmas presents from the kids.

posted on Dec, 13 2021 @ 07:42 AM
link
I always enjoy listening to your stories especially ones Im familiar with such as Doolittle's raid, it's good to hear different perspectives.