The National Weather Service has issued a blizzard warning for the summits of Hawaii Island.

Forecasters said snow accumulations of 12 inches or more could fall on Mauna Kea and Mauna Loa.

NWS said winds could also reach over 100 mph. Experts said the strong winds will likely cause significant drifting of snow.

I imagine it would be called that wherever it happens.

The National Weather Service has issued a blizzard warning for the summits of Hawaii Island.

Forecasters said snow accumulations of 12 inches or more could fall on Mauna Kea and Mauna Loa.

NWS said winds could also reach over 100 mph. Experts said the strong winds will likely cause significant drifting of snow.

Or do I need to stand on one foot and say your name backwards 3 times?

Don't do that he will haunt you till the end of time.

Just saw where Angelchemuel just posted Phage hasn't posted since October, now Im a little worried. Last I recall he was looking forward to visiting his sister once travel restrictions were lifted.

Evidently, at that elevation, it isn't that rare... 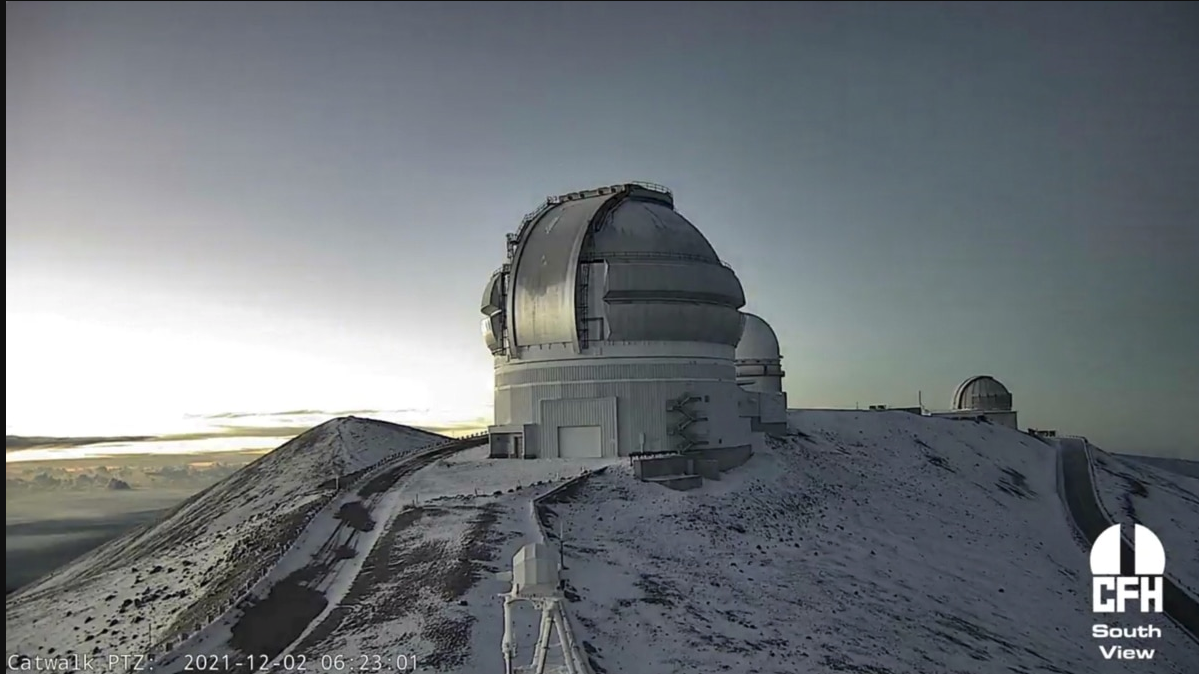 Did Hawaii Get Snow 2021?
The Big Island and Mauna Kea on the Big Island have all seen snow this year at least three times in the past few weeks-as well as Haleakala on Maui. The statewide average for snowfall in Hawai’i is 160 inches. As a result, all three tallest mountains in Hawai’i are covered in snow.

Does Hawaii Ever Have Snow?
The most common locations for snow to fall in Hawaii are Mauna Kea and Mauna Loa, but snow can also cover Haleakala on Maui since it is 10,000 feet high. The highest elevations are most often covered in snow in winter, but snowfall is possible all year round. As of the 20th of January 2021, there has been snow this season.

How Many Days Does It Snow In Hawaii?
Snow may occasionally fall on Mauna Kea’s peak even during the dry season between May and October in Hawaii. Snow can stick for up to six days, depending on how strong the storm is.

Is It Ever Snowed In Hawaii?
high summits of the Big Island – Mauna Kea (13,803′) and Mauna Loa (13,678′) – are the only places in the state that receive snow. Low elevations in Hawaii are generally warm most of the year, but there are a few rare cold snaps that can bring snow.

I have been atop Mt. Haleakala in Maui during a snowstorm once. It was pretty much a blizzard...while it lasted. It only lasted for about 20 minutes. This was back in the late 80's. So it does happen. Pretty rare though because Haleakala is one of the driest places on Earth (if memory serves me correctly).

On a funny note, if you want to see some people who truly do NOT know how to drive in winter conditions...go to Hawaii!! Those people be cray-cray!

I've seen plenty in Scotland, we call them women.

originally posted by: Grenade
a reply to: Flyingclaydisk

I've seen plenty in Scotland, we call them women.

I don't know. If you want to have instant commute from hell, come to KC. All you have to do is add water. Any commute becomes a nightmare. You don't even have to add frozen/freezing water, just water.

people seem to forget that the higher you go, the colder it is. even in places a lot closer to the equator, like the Philippines, where when the temperature dropping to +20 C (68 f), is extremely cold and not really common, it is much colder getting down to +10-15 C (50-69 f), up in the mountains. and people going there wear winter coats and hats and gloves while visiting because of the extreme cold. and we are talking about coats, hats and gloves people in say Michigan wear in January/February. i have even hear that while extremely rare, snow can technically happen.

but i am sure such a snow in the mountains of Hawaii will be used to push their climate change BS.

It's like the general freakout over Mt. Kilimanjaro losing its snow ... which it still has not done.

I wouldn't mind that at all, the brilliance hidden behind his defensive exterior is very much worth it.

I can't fault him for the defensiveness after all the bullying he has received from other ATS members.

He is, perhaps, the ONLY intellectually honest democrat that I've ever known.

My post was not intended to sound derogatory towards him in any way.

Actually, I think his last few posts may have been in a discussion with me, and I still appreciate that effort today.

I don't know. If you want to have instant commute from hell, come to KC. All you have to do is add water. Any commute becomes a nightmare. You don't even have to add frozen/freezing water, just water.


I have experienced that particular hell several times myself.

Once, and ONLY once, as a passenger in my cousin's car from the KC airport - was literally thinking about jumping out the door the next time he slowed down.

And nobody else on the road that day was much better.

Almost seemed like reckless snow driving is a sport in KC.

They get one every couple of years, or they used to. At least once a winter they have to close off the road to the observatories because of snow. I used to see people going from Honolulu to Hilo with skis and snowboards. The first time kind of tripped me out.

I was in Hawaii many moons ago when my husband was station in Kaneohe Bay, let me tell you, at that time, base housing did not have central heaters and when the winter came, we were freezing, the second year we got snow in Nuuanu Pali the highest peak in Kailua, and everybody wanted to go see the snow.

I do not remember any blizzards, but I imagine in the main Island of Hawaii is possible. My son was born in Kailua,


I don't blame him one bit, some folks around here have treated him horribly for the past few years.

I dare you to try it again while I'm here.

He doesn't need, and probably doesn't want any assistance of any kind from anyone, but he'll have mine if the bullying starts again.

Hasn't been with us since the 16th of October. I am worried about him.

Hasn't been with us since the 16th of October. I am worried about him.

I know he'd hate that we were even discussing him here, but I had to try drawing him out, and I know he tends to check in here whenever Hawaii makes any kind of national news.

Sometimes works if he is in a good place and interested in talking.

A bit like when Al Gore told everyone that we're all going to be underwater in the next century and many so called informed posters on here gobbled it up like gospel:

"The film claims that melting snows on Mount Kilimanjaro evidence global warming. The Government's expert was forced to concede that this is not correct.

The film suggests that evidence from ice cores proves that rising CO2 causes temperature increases over 650,000 years. The Court found that the film was misleading: over that period the rises in CO2 lagged behind the temperature rises by 800-2000 years.

The film uses emotive images of Hurricane Katrina and suggests that this has been caused by global warming. The Government's expert had to accept that it was "not possible" to attribute one-off events to global warming.

The film shows the drying up of Lake Chad and claims that this was caused by global warming. The Government's expert had to accept that this was not the case.

The film claims that a study showed that polar bears had drowned due to disappearing arctic ice. It turned out that Mr Gore had misread the study: in fact four polar bears drowned and this was because of a particularly violent storm.

The film threatens that global warming could stop the Gulf Stream throwing Europe into an ice age: the Claimant's evidence was that this was a scientific impossibility.

The film blames global warming for species losses including coral reef bleaching. The Government could not find any evidence to support this claim.

The film suggests that the Greenland ice covering could melt causing sea levels to rise dangerously. The evidence is that Greenland will not melt for millennia.

The film suggests that the Antarctic ice covering is melting, the evidence was that it is in fact increasing.

The film suggests that sea levels could rise by 7m causing the displacement of millions of people. In fact the evidence is that sea levels are expected to rise by about 40cm over the next hundred years and that there is no such threat of massive migration.
"