He ran over a group of people he saw, or thought were all white... He also wrote in social media and his rap songs that he hates white people, not just Jewish people. But you want to claim this is not a hate crime? Why, because he hates whites and most, if not all the people he ran over were white?

This beast on purpose saw a group of mostly white people in a Christmas parade and went straight for the people he thought were all white... But this is not a hate crime?...

I have seen pictures of all the people whom have died, and they all look white. Even the child that died is also white. There was a report one of the girls he ran over is Mexican, but many Mexicans look white as well.

Here is the photo of one of the children he ran over who also died. 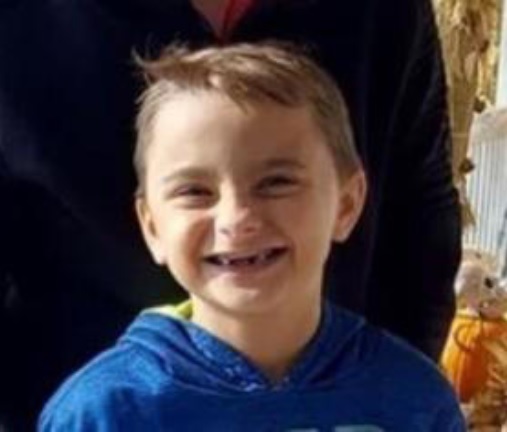 For some reason every article I have read so far about the victims lists their names, but do not give their photos. I saw the photos of the first 5 people who died on the news, and they all were/looked white.

Here are their names.

...
Those who died have been identified as:

Here found the photos of the rest of the people this monster murdered on purpose. 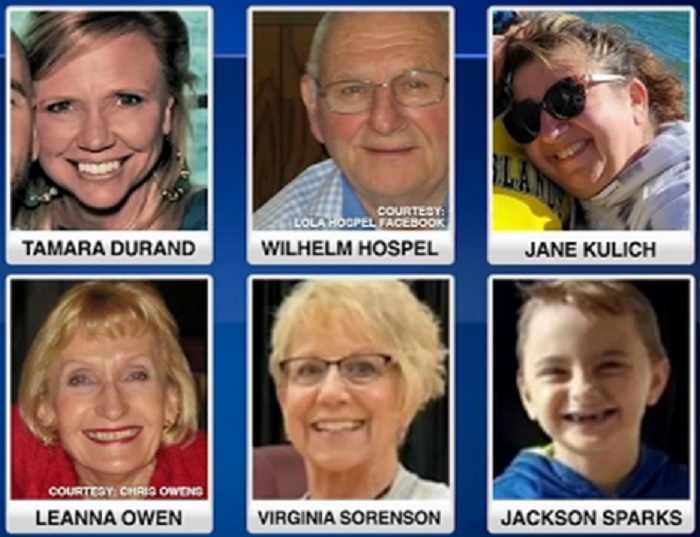 Your claim, and that of the other member saying similar claims, is absurd and inane. This monster posted by his own hands how he hates white people, Jewish people, police officers, and Trump. In his rap songs he wrote how he would like to murder police officers, white people and others... He saw a parade of people most, if not all, whom were white and accelerated as he ran through a group of them but this is not a hate crime?...

Where's the pro-Hitler stuff that he shared? Seems strange that he hated white people but had a soft spot for a white guy who basically hated anyone that wasn't a blonde haired, blue eyed Anglo Saxon!

If he was against the jews, there is a saying..the enemy of my enemy, is my friend. Hitler actually had some muslim allies.

Where's the pro-Hitler stuff that he shared? Seems strange that he hated white people but had a soft spot for a white guy who basically hated anyone that wasn't a blonde haired, blue eyed Anglo Saxon!


You want to talk about strange?... You don't find it strange that WHITE liberals whom agree with BLM, Antifa, etc hate WHITE people and even claim whites shouldn't be in any position of power?... Many white liberals hate other whites with a passion and even want other whites dead...

Did you even know that during WWII many Arab nations sided with Hitler despite him thinking of them as a lesser race? To this day you can find many Arab nations in which people still love Hitler and claim he did a service to Arabs/radical Muslims.

If you had bothered to read the article I linked you would have found what this beast wrote about Hitler.

...
Brooks also shared a meme titled "Hitler knew who the real Jews were!" that propagated the false theory that Hitler's evils were carried out because of knowledge that "negros" are the "true hebrews." According to the meme shared by Brooks, America placed "false white Jews into a state of Israel" and World War III would come once people realize "Hitler was right [and] did the world a favor by killing" six million innocent people in a genocidal rampage. 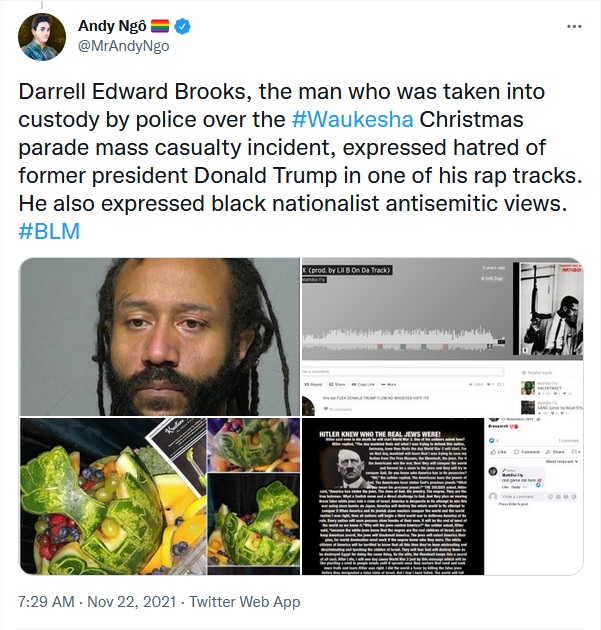 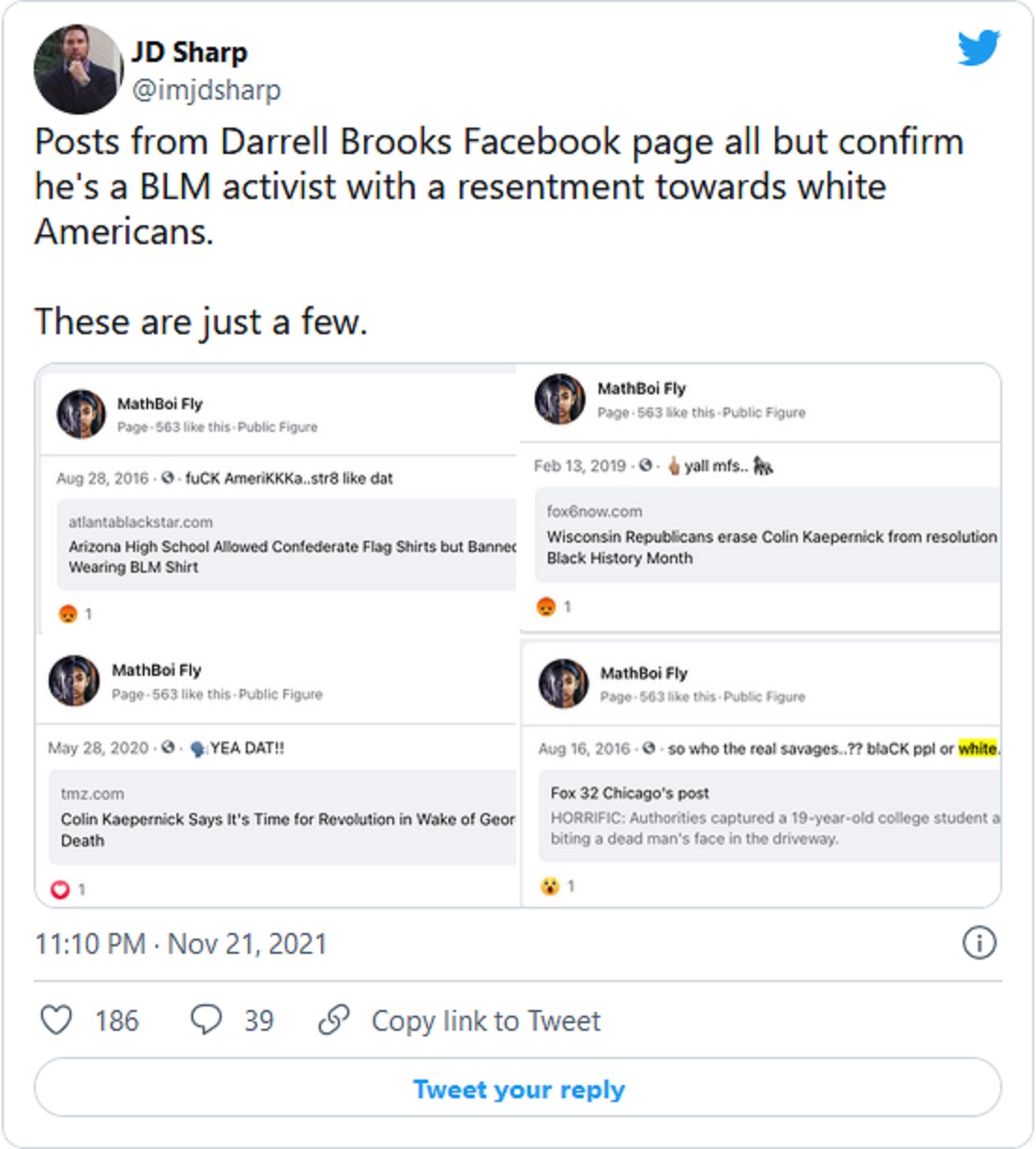 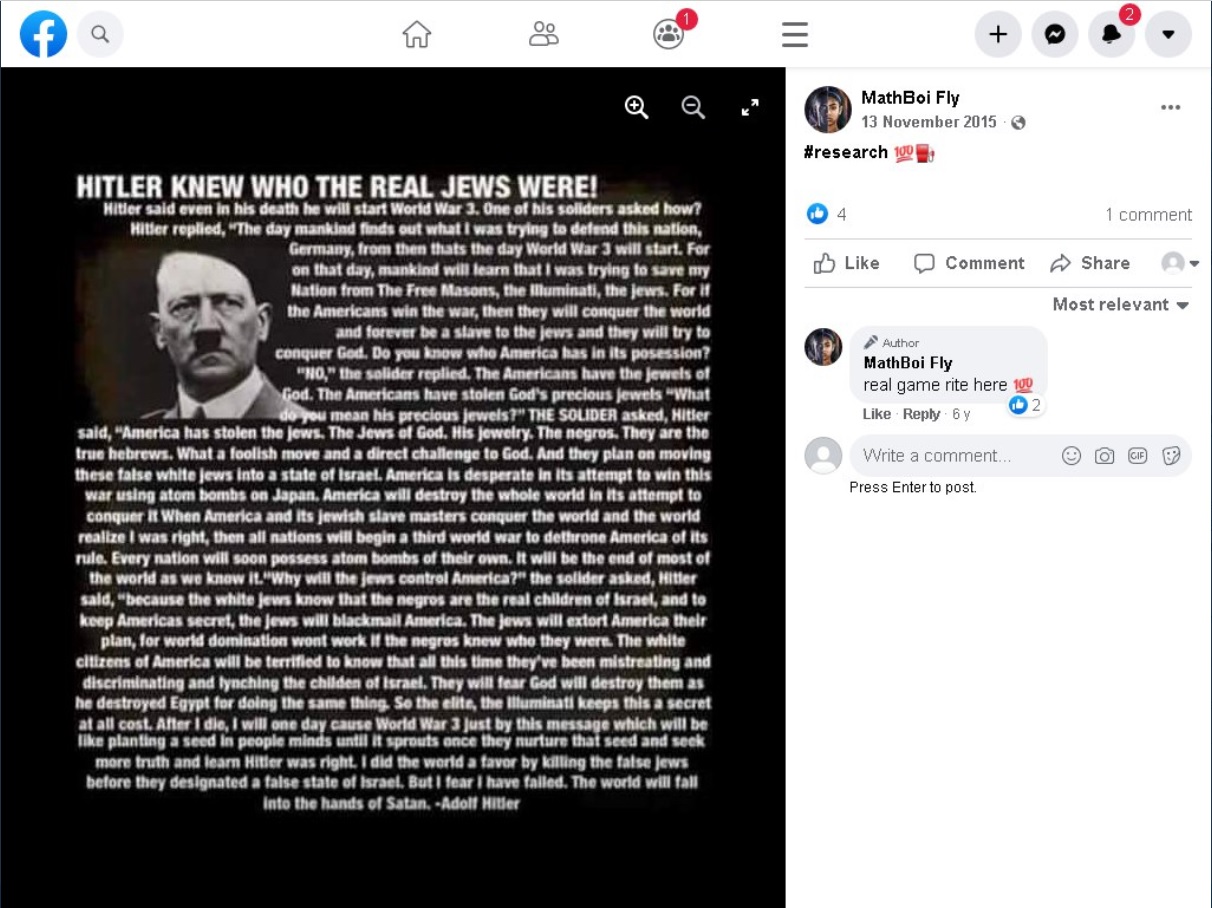 posted on Nov, 26 2021 @ 07:15 PM
link
Supposedly he tried running over his wife/mother of chidd not long ago ether, while being on bail purportedly.

Last time I checked, it was the left that wanted to bring in hate crime charges.

If it was a white person who ran over black people, and even if that white person did not post any hateful messages towards any other race and never used any racial slurs the left, including the mainstream media, democrat leaders and China Biden, would all still claim it was a "hate crime."

Heck, the leader of "Proud Boys" is a BLACK Cuban-American whom was born in Cuba, and like millions of Cubans including myself, hates socialism and communism. But for burning a BLM flag he was put on trial and was branded a racist and was sent to prison by the law/judge when BLM, Antifa, etc want communism and violence... But hey, burn an American flag, even if it was stolen and "it is free speech..."

edit on 26-11-2021 by ElectricUniverse because: add and correct comment.

It is applied here because of his posting history, which is blatantly racist and calls for attacks on white people.

Which is precisely what he did, he chose to commit a terrorist attack, within hours of him being released from jail.

It is applied here because of his posting history, which is blatantly racist and calls for attacks on white people.

Which is precisely what he did, he chose to commit a terrorist attack, within hours of him being released from jail.


Not to mention that the eyewitnesses say Brooks swerved his vehicle towards groups of people and kept accelerating as he ran over people. This was racially motivated, and one of the most heinous racist crimes in 30 years. There are still 3 children in serious condition condition, and thankfully the others seem to be getting better.

...
Seven children were still hospitalized at Children’s Wisconsin as of Monday afternoon, eight days after the fatal attack.

When black supremacists go on murder rampages the mainstream media avoids talking about the racially motivated attacks. Just like Obama attempted to claim that police officers were as much at fault for the BLM black former soldier whom stated he wanted to murder whites, and specially white police officers and murdered 5 police officers.

Thank you for the update on the children. Keeping them and their families in my thoughts.

The veil has lifted for anyone who remembers history, the Eugenicists are implementing what they learned through their experiment known as the 3rd Reich. And sadly you are correct. We are running out of time, rapidly approaching the precipice.