Over run budget, way over the timeline. Most of the tech is already obsolete. It doesn't add much value over the Hubble for the price. Wider field of view and a few minor upgrades. It's sad but that's what happens with crap project management. Nothing but a grift job on tax payers


originally posted by: seedofchucky
a reply to: gortex

Can't wait for this to blow up on the rocket ! James Webb Has been a massive waste of time , money and resources ..

How can it be a waste when it hasn't even been launched?
Hubble far exceeded expectations and lasted for thirty years.
I can't think of a NASA program that has gotten more bang for the buck than Hubble.

I love this picture of Saturn taken by Hubble. 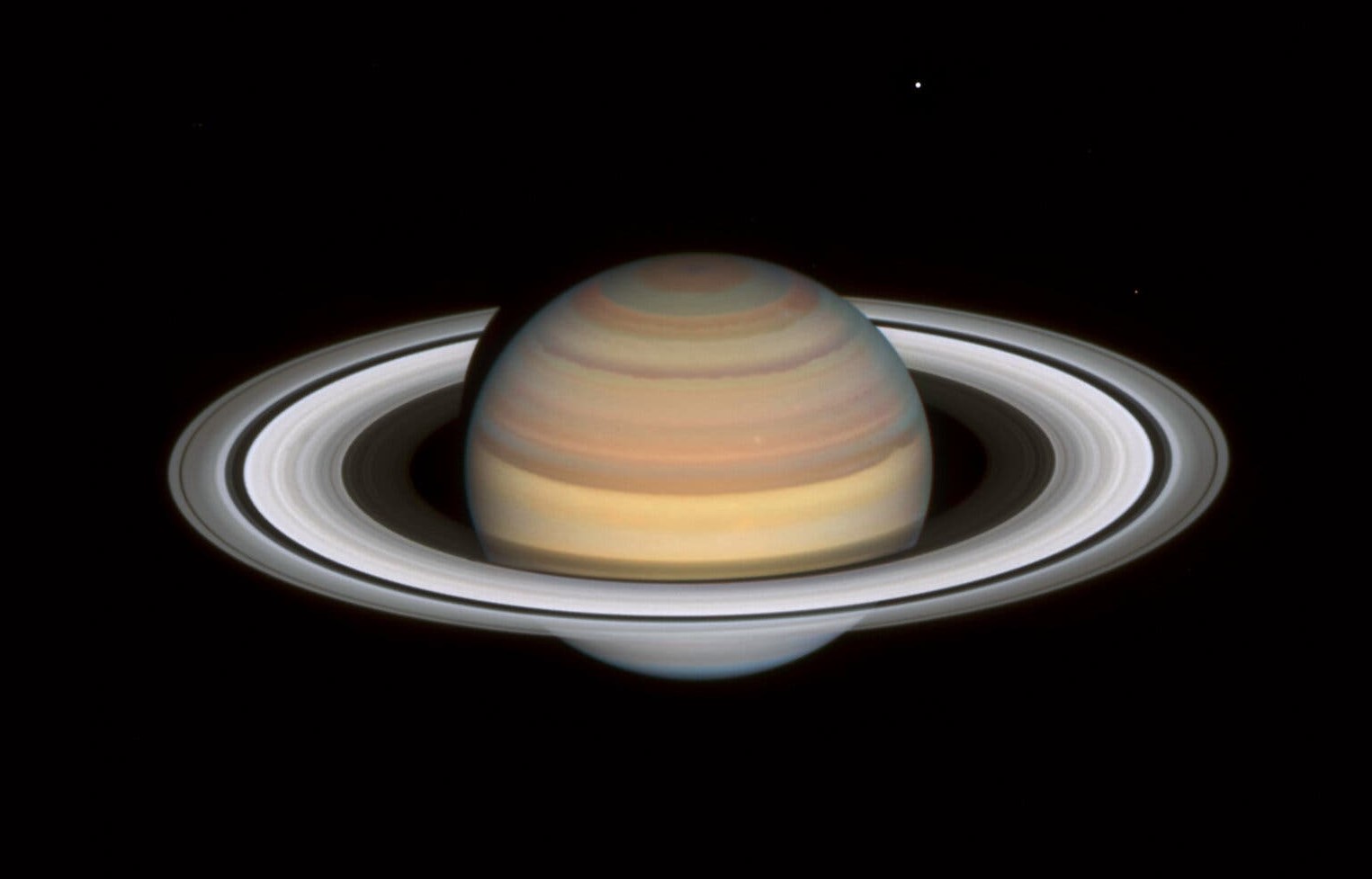 Additional testing was conducted this week to ensure the observatory’s health following an incident that occurred when the release of a clamp band caused a vibration throughout the observatory.

On Wednesday, Nov. 24, engineering teams completed these tests, and a NASA-led anomaly review board concluded no observatory components were damaged in the incident. A “consent to fuel” review was held, and NASA gave approval to begin fueling the observatory. Fueling operations will begin Thursday, Nov. 25, and will take about 10 days.
www.nasa.gov...

posted on Nov, 25 2021 @ 12:07 PM
link
a reply to: gortex
The sad thing is, that NASA has been delaying launches and wasting billions of dollars on failed projects for decades. I miss the space shuttle days where they somewhat had their $*** together. The reality is, the longer projects are delayed, the longer they can employ people so they can rake in the cash and funnel it to companies that make terrible products that break all the time, repeating the cycle.
They should be defunded immediately for wasting our tax dollars, and space x should take over the fixing and the launch of the telescope. They would be able to do it ahead of schedule and without failure. Mostly because they don't have an endless flow of tax dollars to spend screwing everything up.

The sad thing is you felt the need to type that nonsense , NASA are the main reason our knowledge of the Universe has expanded so much in the last few decades , they also have 2 functioning rovers on mars and several functioning spacecraft exploring our Solar System , NASA's budget is a fraction of the US Black Budget of which we know nothing about where that goes.

Their budget is worth the education they provide to curious minds.

The shuttle was underpowered and never went high enough.

She had a 1 in 9 chance of a catastrophic disaster during the first 9 flights, which only improved later on to a risk factor of 1 in 90.

That don't amount to having your "$*** together" imho.

That being said without the shuttle Hubble might never have been launched and certainly would not have been corrected or repaired in the manner in which she was.

When NASA delays launches it generally for a good reason.

"The sad thing is you felt the need"

About a trillion dollars to spend but its shared debt with Canada and Europe.
The cost of viewing extremely red shifted history that there is no real argument exists isn't one of *my* current needs.
Now if this were pointed the other way and would be used to predict Earth threatening storm activity and actually save or improve human lives..
Of course if you understand historically how big science came up with the plan to prove zero point energy theory and report the destruction of cities in Japan in the press, this might make perfect sense.

They just wasted $20 Trillion on the likes of Afghanistan over the past two decades, i think they can spring to $1 Trillion for the James Webb Space Telescope.

At least it will do what it says on the tin once they manage to get it up there.

As to "zero point energy" i don't think that can realistically be extracted from the vacuum, certainly not with current technology or our understanding of physics.
edit on 26-11-2021 by andy06shake because: (no reason given)

James Webb was also administrator of NASA from 1961 to 1968 and played an integral role in the Apollo program.
I was given my first college thermodynamics exam after asking about the Apollo project, too young to have any memory of Laika so I had to pull out the bloody steam tables and actually read.


About a trillion dollars to spend but its shared debt with Canada and Europe.
The cost of viewing extremely red shifted history that there is no real argument exists isn't one of *my* current needs.

Now if this were pointed the other way and would be used to predict Earth threatening storm activity and actually save or improve human lives..


We already have satellites that do that.

Of course if you understand historically how big science came up with the plan to prove zero point energy theory and report the destruction of cities in Japan in the press, this might make perfect sense.

You probably believe you know whats in the tin like andy06shake.
I'm sure I don't.

Back in 1954 some of our best physicists were screened and allowed to pursue the ancient alchemists dream of transmuting the elements.

Of course the process of Fusion requires energy auditing predictions of how much energy will be released due to mass changes. The "Zero point energy term" implies perfect auditing with all energy accounted for which is hard to achieve in a lab on a small scale.

The 1954 Castle Bravo physicists calculated that the energy yield from the fusion process they designed would be equivalent to ~6.0 megatons of TNT.
Unfortunately the physicists didn't know their physics was flawed so as you say when the blast yielded 15 megatons it didn't make sense.

That may have been the day atomic physics died.
An inter-dimensionally connected super-plasma who would have thought?

Seems quite a price to pay to find out a physicist was wrong.
The ancient star explosions from billions of years ago have unlocked secrets after traveling thousands of light years through space. There is natural interferometry that occurs over such long distances but I'm not sure the Webb telescope is going to give us much new information without hearing some more details.

This stuff always seems to come off like Betty Hills star maps when you discuss it with the kids.

edit on 26-11-2021 by fromunclexcommunicate because: (no reason given)

Fusion, unlike fission, is relatively clean.

So the Tuna may have been ok if the device was indeed ""a fusion bomb"", very doubtful. LoL

You do realise a pure fusion weapon is still a hypothetical design?

Our thermonuclear weapons still have a primary fission explosive.
edit on 26-11-2021 by andy06shake because: (no reason given)

I was thinking the same thing irradiated fish would have less bacterial infestation but I'm assuming the fish were in the hold not on deck. There could have been radioactive contamination from the fission process that they used to use to make the Teller light(if you believe all that). And of course the fisherman claimed it was raining powdered Coral reef.

edit on 26-11-2021 by fromunclexcommunicate because: (no reason given)

I imagine ether way it would have been rather a sight to behold as long as they kept their retinas.

The actual raw data would be pretty boring and unrecognizable.
They do population studies that confirm we still aren't ready for the truth though.
Alien abductions that were reported back in the 1960's are often more recognizable now, but out of respect for the aging or deceased abductees involved there is a code of silence enforced.

DId you bump your head, amigo?

Do you have any idea how much money that is?

Must have hit it on a zero.

Then again when you get to numbers like that its kind of easy to lose proportion.

As long as the James Webb don't bump her head on the way up ile be a happy bunny rabbit all the same.