How is it possible that his has been forgotten? 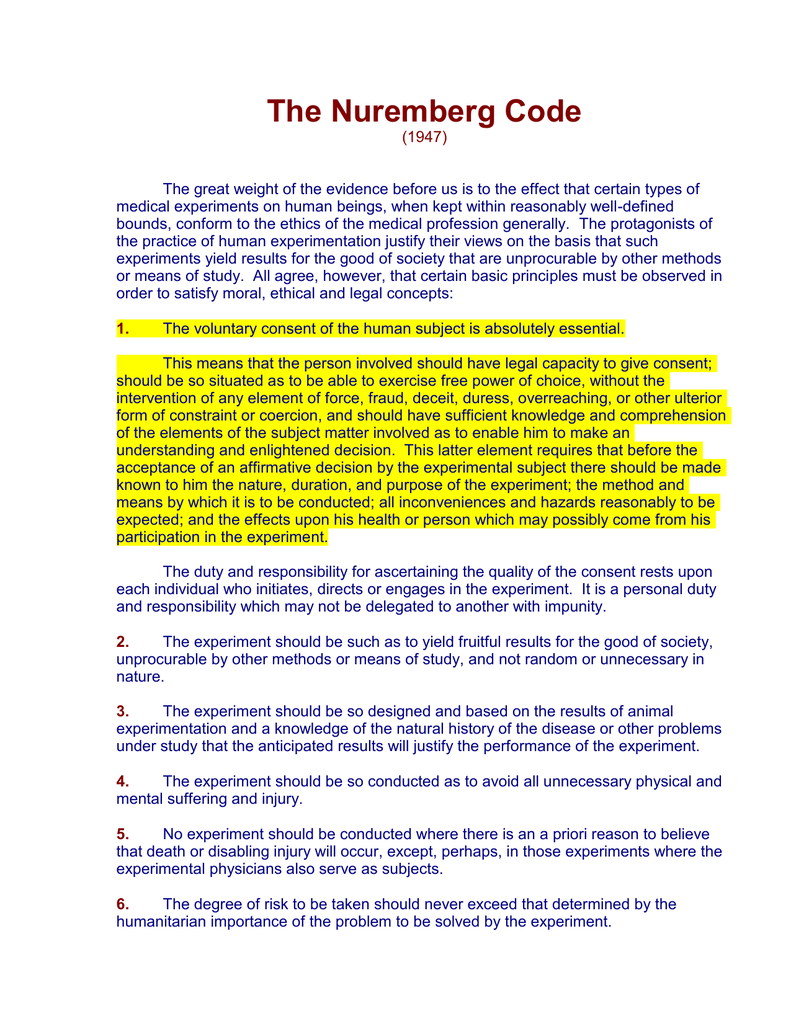 posted on Nov, 20 2021 @ 12:16 PM
link
The fact that the mandatory vaccine requirement is scheduled for future implementation clearly demonstrates that it is a political requirement rather than one based on any perceived medical emergency.

I watched a short video earlier today observed that in all the reporting by MSM, they all stated that it was the "First" such mandate in the world. What the creators of the video were hinting at was all in the wording, stating Austria is the "First", not the "Only" state to mandate nationwide compliance! More to come possibly? We shall see.

posted on Nov, 20 2021 @ 04:31 PM
link
We already know the answer to this. Gibraltar has a nearly 100% vaccination rate. Everyone there has been vaccinated 2.7 times. They also have the highest rate of Covid in the world.


a reply to: Ellie Sagan

My husband has some interesting dreams sometimes that seem meaningful. He was told in a dream to move to Poland.


Your theory is missing an important point: most of the vaccinated have failed to see the truth of what we are facing as a human race. It’s not as if they said, “Oh, I am going to choose communism and to underscore my choice, I am going to get this vax.”

Rather, they were fearful and ignorant of the virus and were choosing life and protection over sickness and potential death.

You cannot claim that if each vaccinated person were made aware of the truth that they would have chosen the vax. There is still great potential to awaken people, as we have done with school boards, and have people fight back for our country, and indeed the world.

I could only imagine the possibly adverse reactions which they arent mentioning.
edit on 20-11-2021 by HawkEyi because: (no reason given)

I feel in Austria they will soon be opening the Fascist hunting season again. It all seems sadly inevitable. But you never know they might withdraw from the brink. This world can spin on a dime. They might have problems with the Police and Army with that call.

originally posted by: angelchemuel
A friend sent me these screen grabs ref the Austrian Military. Looks like they are standing firm against the Government mandate!!! 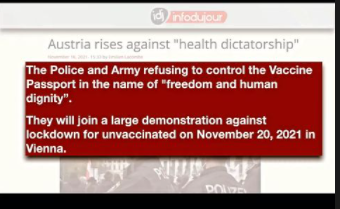 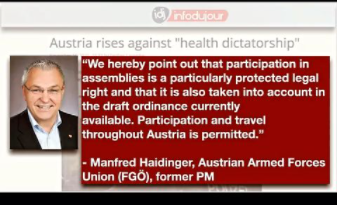 Wow! Finally!! Great to see that!! Hold firm friends~ it's about to get (even more) interesting!

Photo from a demonstration on the 20th. Caption of the banner is, "Control the borders, not your people".

Israel already did this and failed miserably, covid cases are through the roof and deaths are rampant. Their leader finally stepped out from behind the shadows and told them all the vaccinated are the ones spreading, getting sick and dying. But meh not like anyone ever listens anymore. Especially when it comes to our own media blackout.

posted on Nov, 21 2021 @ 03:11 AM
link
a reply to: Starcrossd
At least they have the military backing.. sadly after talking to dozens of current active duty military.. they are primed and ready to go.. even against our own country.

They say the US military is very very divided. Half of them will have no doubts or questions about shooting us civilians.. (mostly the new recruits, who joined just to shoot people., Which is part of the reason they recruit at such a young age, which means almost every military personal under the age of 23 who has yet to see real combat will be willing to kill their own countries civilians..)

Most of the new recruits won't even realize what they are doing until their own family gets taken out by another squad.. or until it's literally a massacre..

So, if you have kids in the military.. you better hope and pray they do the right thing and aren't trigger happy.

If you don't believe me talk ask a friend. "If the president signed an order to kill domestic terrorist (civilians) people of this state/city do you think your unit will do it? You will be surprised at what they say. They will clearly state that MOST of the vets that have been in for a few years won't do it. But all of the new comers will.

When I was talking to my friend in the military, at first he was confused by the question. So I had to spell it out clear as day for him. He was definitely caught off guard by it. As this isn't something most people in the military are allowed to even think about. They are just told to follow orders.

This was told to me by a guy with level 5 clearance. As a data/intel officer.. won't get more into his role or identifying things as don't need him punished or what not. As you know they do a looot to protect those guys..

So last warning, if you have kids in the military.. talk to them make sure they do the right thing.
edit on 21-11-2021 by BlackArrow because: (no reason given)

posted on Nov, 21 2021 @ 04:48 AM
link
You seen billie frechette lately? just kidding, I'm still over here where my brother in Tacoma, decided to home down here, he had a child & so I get to be an uncle again in my 60's. I figured you'd be here, and I want to find you and say hello. Glad you're still around and swingin. Would love to chat about anything, old times, or whatever, we used to talk for hours. Anyways you take care Dave.
Peace JD .
a reply to: bobs_uruncle

It's just unreal how people can ignore those facts!
I know they've been being called out since the beginning, and the group doing so is getting larger. It really seems like it doesn't matter, because they just keep digging in with pushing the vaccine!

The authorities are "all in". Graceful backing off no longer possible.

You sure…. Of all your listed facts?

This translates to 1,379 infections per 100,000 people reported in the last 7 days. Overall there have been 6,721 infections and 98 coronavirus-related deaths in the territory.

The Government said in a statement on Friday: "Given the exponential rise in the number of cases, the Government for example intends to cancel a number of its own functions including official Christmas parties, official receptions and similar gatherings.

originally posted by: Macabe
You seen billie frechette lately? just kidding, I'm still over here where my brother in Tacoma, decided to home down here, he had a child & so I get to be an uncle again in my 60's. I figured you'd be here, and I want to find you and say hello. Glad you're still around and swingin. Would love to chat about anything, old times, or whatever, we used to talk for hours. Anyways you take care Dave.
Peace JD .
a reply to: bobs_uruncle


I don't know if I would want to be in Tacoma when it gets weirder than it already is. I'd be going to Texas or Florida, maybe Arizona. I would want to be somewhere close to the Mexican border or a lot of sailboats with dead owners, because when sh!t hits the fan, we are all going to be trying to go south, otherwise, we're all going to starve or freeze to death. You know that's part of the plan, right? Decrease CO2 to accelerate an ice-age, to destroy growing seasons, to cut off food supplies to the majority, who will die off from starvation and a lack of fuel to stay warm. Then you get fiefdoms, warlords and all that Mad Max crap, just with skidoos lol. Couple that with the more than obvious clot shot/death jab and you've got a recipe to cull 85%-95% of the population, maybe more. If you live through the jab and you live through the starvation, you still have to live through the violence of fighting for resources like food, clean water, fuel, etc.