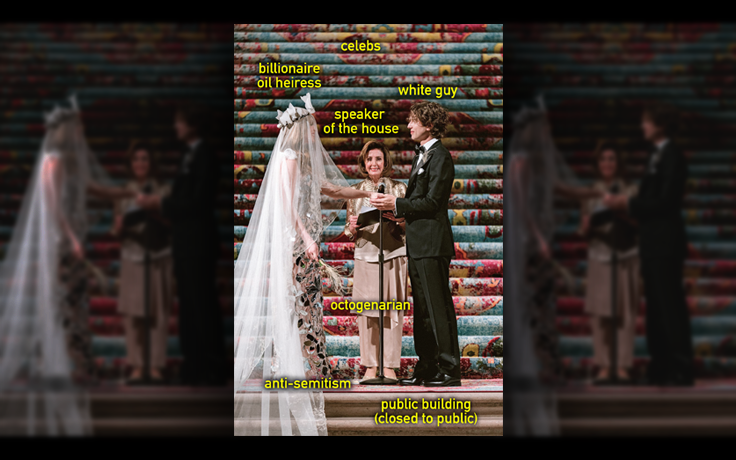 House Speaker Nancy Pelosi (D., Calif.) was photographed officiating Ivy Getty's lavish wedding in San Francisco last week. The photo explains everything you need to know about the Democratic Party. Nearly every important aspect of the party and its voter base is represented.


Getty, the great-granddaughter of oil baron J. Paul Getty,is presumed to have inherited several billion dollars after her father, John Gilbert Getty, died in 2020. Her grandfather, Gordon Getty, has helped finance the careers of prominent California Democrats such as Willie Brown, Gavin Newsom, and Pelosi. Billionaires and their wealthy scions tend to be loyal backers of the Democratic Party, whose most generous supporters include George Soros, Walmart heiress Christy Walton, Apple heiress Laurene Powell Jobs, and the Pritzker family, heirs to the Hyatt hotel fortune. J.B. Pritzker was elected governor of Illinois in 2018, and the 2020 Democratic primary featured two billionaires, Tom Steyer and Michael Bloomberg.

So you have Pelosi at the wedding of a fracking OIL BARONS great-grand daughter !

At the same time her and her merry band of frauds push all things climate change.

Democrats sure like to whine about saving the planet, but they sure don't give one rats arse where their dirty money comes from.

Another reason the church of climatology is so full of hydrochloro bull CRAP.

I report you decide.

Oh yeah the article went on about some of other stuff like the real face of those frauds.
edit on 13-11-2021 by neo96 because: (no reason given)

I think this is an example of extreme white and political privilege.
Rules for thee but not for me...

Guess who WILL pay the massive tax increases built into these multi trillion-dollar boondoggles?

Dude a rockefeller was the Vice President.

That’s like having the grandson of hitler in there.

originally posted by: visitedbythem
a reply to: neo96

posted on Nov, 13 2021 @ 01:18 PM
link
Soo we know now what that piece of crap woman was trying to say, we are the bird bath they are the birds and they have all the privilege, they bath in our misery,

Democrats sure like to whine about saving the planet, but they sure don't give one rats arse where their dirty money comes from.

That's a broad spectrum truth. No one in office cares where their money comes from. It's called capitalism, aka "morals are optional, profit is not". Honorable humanitarian leadership happens after sabotaging your ethics to balance the budget, because a bankrupt hero is ultimately a useless one.

I was thinking this was Saturday

We all know the Dems are frauds and hypocrites and so do their supporters, but they don’t care.

Republicans roll that out like the dems do being offended or calling things racist.

The bride's dress was covered in shards of broken glass, which may or may not have been an homage to the anniversary of Kristallnacht. The bridal gown and the bridesmaid dresses were designed by British fashion icon John Galliano, who also attended the wedding as a guest. In 2011, he was convicted in a Paris court for making anti-Semitic remarks, which is illegal under French law. "I love Hitler," Galliano reportedly told a group of Italian women at a café during Paris Fashion Week. "People like you would be dead today. Your mothers, your forefathers would all be f—ing gassed and f—ing dead." In recent years, the Democratic Party has become a space for anti-Semites.

posted on Nov, 13 2021 @ 03:15 PM
link
Well now we know all those comments about Democrats hating the Jews, is true, they really no only hates America but also Israel.

Democrats your party is not longer what you grew up to trust and believe, now is full of socialist, nazis and opportunist.

The no longer hold the values of America or Americans.

originally posted by: visitedbythem
a reply to: neo96

originally posted by: marg6043
Well now we know all those comments about Democrats hating the Jews, is true, they really no only hates America but also Israel.

Democrats your party is not longer what you grew up to trust and believe, now is full of socialist, nazis and opportunist.

The no longer hold the values of America or Americans.

Yep, it's just the democrat party and absolutely nowhere else in American politics or industry.

edit on 11132021 by GuitaristRob because: spelling

posted on Nov, 13 2021 @ 04:08 PM
link
The Democratic Party is a host of sell outs. In their short sightedness and lack of even caring about anything other than their agenda along with a total disregard for the Americans they represent would seek their own mothers at a loss in order to save themselves. They are full of people that only care about themselves and about what is their neighbor saying or doing that they can use as leverage against them.