The Pandemic as a Living Nightmare

posted on Nov, 12 2021 @ 09:04 AM
link
I've been struggling with the reasoning for all the corrupt, strong arm tactics involved in the pandemic. How can any of this chaos be good for anyone? It has gotten pretty extreme with this vaccine mandate and the political lines it is drawing.

Our government agencies and political leaders started out with some sound reasoning, even if it was in panic mode. But things have changed where the reasoning has become some kind of world wide twisted evil agenda. Unless I accept some of the fringe conspiracy theories, the ones that could get you arrested now, I can find no logical reason for how this is playing out.

After a long while trying to make sense out of any of this, I began to examine my feelings outside of logical deduction. I allowed my mind to drift around into personal experiences and compared my feelings with what I'm feeling now. The closest comparison I found was in the theme of my nightmares.

A common theme in many of my nightmares is being threatened by an evil force of some kind, one that wants to do extreme harm to me in some way. I feel imminent danger and I'm ill prepared to defend myself. This evil enemy is much stronger than I am to fight it face to face, so I end up fleeing to safety or fighting in an a hit and run fashion. Survival is the main concern and the outlook is grim.

Often, the personification of evil in the nightmare is insane, without reason just the motivation of evil acts. You rarely can make sense of what the nightmare enemy might tell you, but what ever it says, it a lie or a huge spin on the truth.

Obviously emotions like fear, mistrust, and suspicion are the underlying emotions. Add the uncertainty and insanity of the times into the mix and this type of nightmare surfaces. I haven't had many nightmares that I remember lately, but based on my feelings about all this, it feels like I'm living in one right now.
edit on 12-11-2021 by MichiganSwampBuck because: Typo

posted on Nov, 12 2021 @ 09:35 AM
link
All one can do is create their own circumstances as much as possible and stay as far away from these global sociopaths and their feeble minded followers. The corporate and government sociopaths are powerful, ruthless and regard common good people with extreme prejudice. They literally want to set the world on fire and start over. If it feels like they want you dead that's because they absolutely do and have said as much. It has happened many times in history. Eventually it will stop but it will take years. People will have to turn off legacy media, sports, do productive things and engage with productive people. It is happening but it is a slow process.

Proactive and positive activities would likely alter the fear response from flight to fight. I'm not sure the feeling of being pursued by evil will disappear though.

posted on Nov, 12 2021 @ 11:27 AM
link
I think part of it is the bureaucracies sense they're "all in" and there is no graceful backing down possible now. So far they've been the irresistible force. Will enough people prove to be the immovable object?

posted on Nov, 12 2021 @ 01:35 PM
link
I have heard of a theory that in the future (deep future) what's left of the living beings now existing as humans will run out of things to trade and will begin trading "Chaos". This year is a "currency mining" operation in the future by humans.

Hi MSB. I have had the same experience i.e. rather than continuing to look outwards at the political actions etc, turning my awareness inwards for the answer. Looking at how I feel. Using myself as a dowsing rod to point in the direction of the meaning of what is happening in the world. I have had the same awareness of the similarity of dreams that forcibly wake one up panting and gasping for air after escaping from an evil and threatening stalking presence. It must be indeed threatening if consciousness has had to immediately wrench itself from the dreamscape back to the waking state. It is as if that presence wants your breath, your soul, your awareness, your essence.

But lately I have been experiencing two distinctly different states. First of all physically - there are times when I feel I am dying, I am able to hardly put two associative thoughts together, and feel weak. Mentally and emotionally I am filled with pessimism and hopelessness and feel as if I am being hunted down by the human forces of political power trying to force me to commit myself to obey their collective will. It seems also that the majority of the population seem agreeable to skip along in lockstep with the mandates further isolating and defining me as the enemy of non-compliance. Die or comply, comply or die!

As I say though a second state has been making an appearance - A surprising feeling of health and optimism and the awareness of a gentle wind blowing an unusual scent into the air now and then which drew my complete attention in spite of some still background mental chatter related to the threats to my physical freedoms. I didn't realise that what it was, was the "wind of change".

Last night I fell exhausted into a deep sleep, so deep that no noise around me could disturb it. In the early hours I suddenly awoke refreshed and the breeze outside came searching through the open window caressing my cheek. The mind was silent, so silent that it would have required a great effort to start that motor. It was the reality around me that was beyond the realm of the mind that dominated. It was not so much the presence of that cooling breeze which captured my attention, but the intrigue as to the source of it. It was the wind of ages. A new age is blowing in. It was heralding it.

That is why TPTB are in such a hurry. They are attempting to establish a dam wall against it, a fortified city. Because they know that they have no place in that world to come. They are the ones afraid....and angry. This is their last stand - their last gasp.

We so often forget that we are ancient beings whose roots are joined with existence at the deepest of levels. We and the father are one. At this level all is known and understood, past present and future are all one. Sometimes the nature of this reality breaks through the dreams and the nightmares.

It is the enemy that has created time to ensnare us.

Maybe with the living nightmare we still have the opportunity to dream nice dreams. But for me lately, reality is a daily progression into the realm of nightmares. It's like a horror film, but it's really happening. Almost as if I've died without realizing it and am in some hellish purgatory. I'll stop now before I get too extreme. 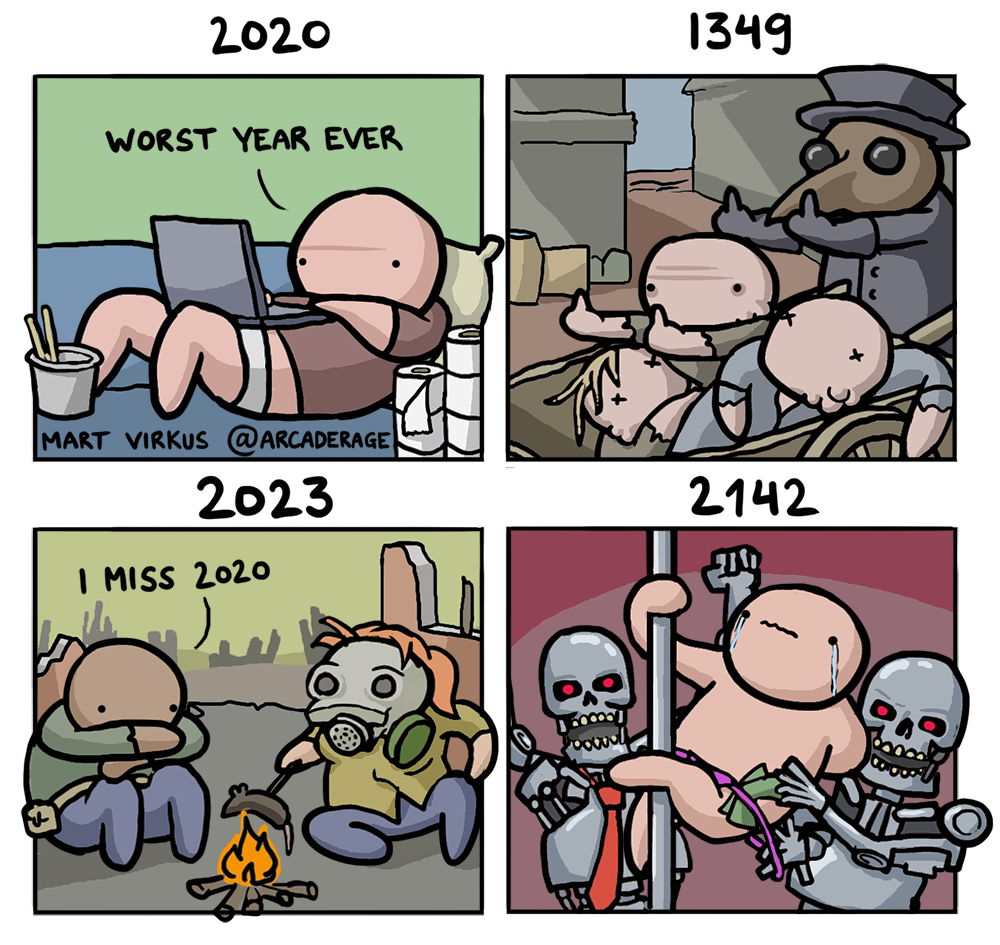 I suppose I must accept the idea I'm just being a big fat wussy for exploring my feelings.

Made me laugh though, too rare these days.
edit on 12-11-2021 by MichiganSwampBuck because: Added extra comments