The beast vs. the false prophet

Popular culture often presents the antichrist or the first beast as a charismatic politician that comes out of nowhere. I will tell why I think this is false and the beast(antichrist) is a religious figure and the false prophet is a government.

I think the antichrist will be a religious leader like a Pope. I was caught up with this as well until I read some things that I have read 100 times that pointed in a different direction.

First, the description of the beast from the sea.

2 And the beast which I saw was like unto a leopard, and his feet were as the feet of a bear, and his mouth as the mouth of a lion: and the dragon gave him his power, and his seat, and great authority.

3 And I saw one of his heads as it were wounded to death; and his deadly wound was healed: and all the world wondered after the beast.

This verse describes a beast with 10 horns with crowns(government) and 7 heads of blasphemy(religious). Blashphemy is usually associated with religious doctrine.

Verse 3 tells us that ONE OF IT'S HEADS will get a deadly wound. So it switches focus from the entitre beast system(10 horns with crowns, 7 heads of blasphemy) to one of it's heads.

This head is the antichrist. As you can see in verse 4, he's connected to worship. He will be worshipped. I believe this points to a Roman Emporer. Who was both a political leader and a religious leader like the Pope. The pope is an extension of Roman Emperors ot Pontifex maximus.

The pontifex maximus (Latin for "greatest priest"[1][2][3]) was the chief high priest of the College of Pontiffs (Collegium Pontificum) in ancient Rome....A distinctly religious office under the early Roman Republic, it gradually became politicized until, beginning with Augustus, it was subsumed into the position of emperor in the Roman imperial period....In December 2012 Pope Benedict XVI adopted @pontifex as his Twitter handle,[48] prompting users to pose questions with the #askpontifex hashtag.[49][50] This has been maintained by his successor Pope Francis, who now uses it as his Twitter handle.[51]

The beast who receives the deadly wound is concerned about being worshipped and he makes war with the saints:

6 And he opened his mouth in blasphemy against God, to blaspheme his name, and his tabernacle, and them that dwell in heaven.

7 And it was given unto him to make war with the saints, and to overcome them: and power was given him over all kindreds, and tongues, and nations.

8 And all that dwell upon the earth shall worship him, whose names are not written in the book of life of the Lamb slain from the foundation of the world.

Again, this is a religious beast. He speaks blasphemies against God. So this beast will be seen as a believer in God but he will really be blaspheming God. He will also make war with the saints. In Daniel it says he wears out the saints. The saints will be seen as fundamentalist terrorist who say things like Jesus is the Way, the Truth and the Life and no man cometh to the Father except through Him.

This will be seen as divisive to the Pope's universal religion.

The beast will be inhabeted by the beast that ascends from the bottomless pit from Revelation 17. I believe this beast will be the soul of a past Romn Emporer. I wrote a post on the possibilities of his identity.

Look for the deadly wound
www.abovetopsecret.com...

The Beast that was and is not identified
www.abovetopsecret.com...

The Bible tells us he will not have the desire of women.

Daniel 11:37 Neither shall he regard the God of his fathers, nor the desire of women, nor regard any god: for he shall magnify himself above all.

The Abrahamic Family House will be a beacon of mutual understanding, harmonious coexistence, and peace among people of faith and goodwill. It consists of a mosque, church, synagogue, and educational center to be built on Saadiyat Island, the cultural heart of Abu Dhabi in the United Arab Emirates...The vision for the Abrahamic Family House originated after the signing of the Document on Human Fraternity by Pope Francis and Grand Imam Ahmed Al-Tayeb in February 2019. 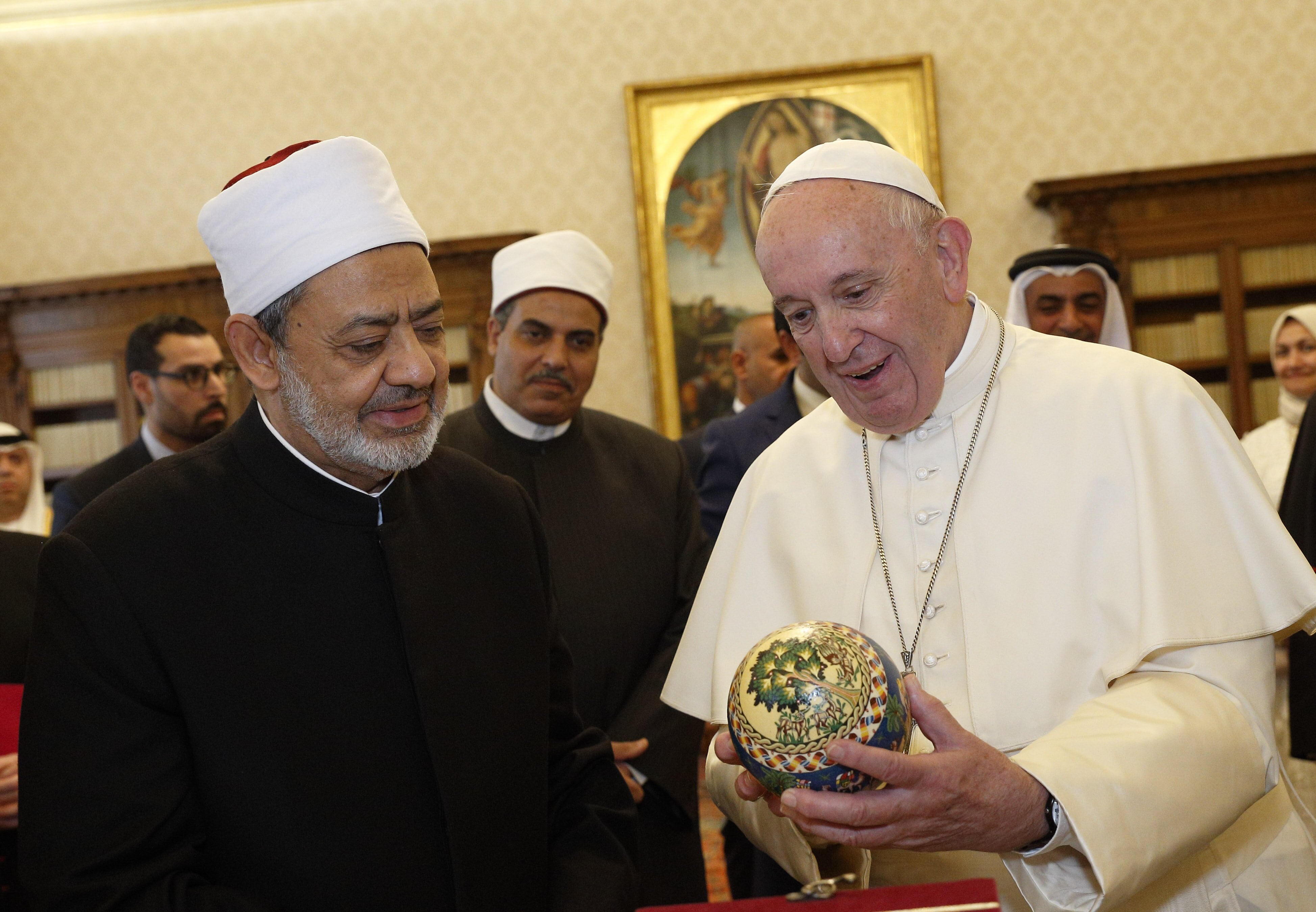 Pope Francis is working with Abbas on a two state solution:

Pope Francis holds a private audience with Mahmoud Abbas, President of the State of Palestine, and discusses the need for direct dialogue between Palestine and Israel to achieve a two-state solution.

Daniel 9:26 And after threescore and two weeks shall Messiah be cut off, but not for himself: and the people of the prince that shall come shall destroy the city and the sanctuary; and the end thereof shall be with a flood, and unto the end of the war desolations are determined.

We know the people that destroyed the Temple were the Romans in 70 A.D. Like I said, the Papacy is the extension of the Roman Empire. So this Pope or another Pope could be the prince that shall come.

The little horn makes war with the saints:

Daniel 7:24 And the ten horns out of this kingdom are ten kings that shall arise: and another shall rise after them; and he shall be diverse from the first, and he shall subdue three kings.

The Vatican is a little horn. It's government, the holy see, is seen as little in it's comparison to it's religious component. So it's a little government that's different yet more stout(powerful) than the larger governments. Look how the pope controlled the nations of Europe for a long time.

Let's look at the beast from the earth.

I think this is a single nation vs. a sea of nations.....

I think the false prophet could be America. I also see America as the Daughter of Babylon.

Is America the Daughter of Babylon?
www.abovetopsecret.com...

This beast from the earth has 2 horns but no heads of blasphemy. These 2 horns could be the head of it's government which is Republican and Democrat that acts like a lamb or Christian nation. In reality, it speaks like a dragon and it's run by freemasons, skull&bones and others with a satanic agenda.

The reason this government is called the false prophet, night be because of this verse.

13 And he doeth great wonders, so that he maketh fire come down from heaven on the earth in the sight of men,

If you go back to Elijah vs. the prophets of baal, you read this.

1 Kings 18:22 Then said Elijah unto the people, I, even I only, remain a prophet of the Lord; but Baal's prophets are four hundred and fifty men.

24 And call ye on the name of your gods, and I will call on the name of the Lord: and the God that answereth by fire, let him be God. And all the people answered and said, It is well spoken.

37 Hear me, O Lord, hear me, that this people may know that thou art the Lord God, and that thou hast turned their heart back again.

38 Then the fire of the Lord fell, and consumed the burnt sacrifice, and the wood, and the stones, and the dust, and licked up the water that was in the trench.

So John may have seen America dropping bombs from the sky without any context. He might see this as a false prophet causing fire to fall from the sky.

If you look at this beast from the earth, he's the one that has the power to make people take the mark of the beast and this mark is connected to buying and selling.

So I think this beast, the false prophet might be America.

posted on Nov, 12 2021 @ 08:36 AM
link
I Will read this and comment further later ... all I know is Christianity is being hit and assaulted more than it ever has in my lifetime (58 years). What's weird is most other faiths don't draw the ire of the nonfaithful as we see here. We have lost the basic respect for an individual's right to believe whatever they want to believe without ridicule, scorn, and outright prejudice.

While my immediate family, parents, and siblings were never ultra-religious or even semi-religious. We were taught and attended church a little bit not a lot mostly when we would visit our grandmothers, but both my parents do believe in the afterlife, etc. so do I as well as all my siblings.

The strange part, is only now are we getting a little attitude from some of our now adult children. It's nothing major mind you, we never had long theological discussions about beliefs, etc., my daughters, for instance, are both pretty far-blown atheists, which is fine if it works for them

That said they aren't above that attitude of well if you believe this you are ignorant, it's like no you have no valid opinions on any other topic because of your belief in this one topic. This irks me but, it's fine they are adults, still, it's the little things. Respect others' rights to their beliefs, period. They don't, a lot of this generation doesn't.

You do know if you want people to invest in crypto, the best way would be not to spam totally unrelated threads. Hell, I do invest but most people get absolutely turned off by this BS.

YOU want TO PROMOTE CRYPTO, spam the boards with don't buy crypto posts, otherwise you sound like some yutz who has poured his life savings into DOGE or SHIBA and is freaking out.

At least post in the crypto threads there are plenty here....

posted on Nov, 12 2021 @ 11:36 AM
link
Christ is here already, he had to be reborn in himself to come from Heaven on the third day, for 1 day for God, is a 1,000 days on earth, so the third day begun in 1994, exactly 2,000 years after Christ’s birth in 6 bc which makes him 27 today, he was born Catholic, ie in Christ, to full fill the scriptures, on the 3rd day he will rise again, he rose from the dead, 3 days after his crucifixion and now was reborn in Christ, on the 3rd day, which is 2,000 years exactly plus 1 second is the third day, that he will rise again, so he will rise and come again, I have seen him, his name is Sean, the name he took here, Sean Murphy, his real name is Jesus, and you will see him soon.