Pfizer just posted this meme and disabled comments for this tweet 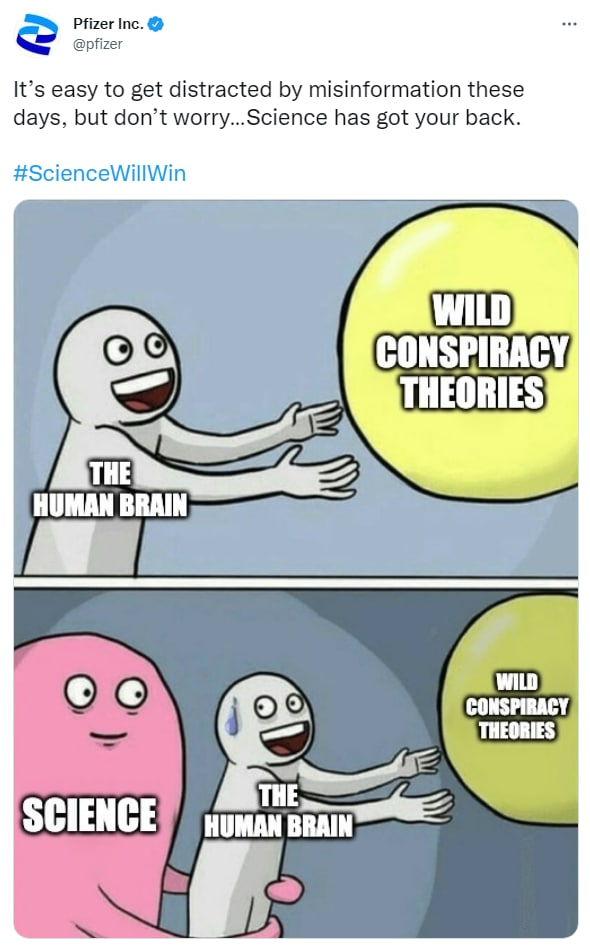 Propaganda hides their scum and by virtue of turning off the comments, they know the backlash that would have ensued calling out their BS 'sCiEnCe wIlL wIn' hashtag. Their globalist misinformation campaign coming for the children with jabbed muppets backfired, so now they resort to memes and blocking any discourse about their filth.

I particularly like how their science crawls back under its rock when natural immunity, government payoffs, death by vaccine etc gets raised.

TheWhiteKnight
+1 more
posted on Nov, 9 2021 @ 04:42 PM
link
Well I just lost two posts
(# 1484 and one after this # 1485, which never posted but did register, as being counted)
on a thread that was apparently
quashed right here, one on Pfizer CEO Albert Bourla calling wrongvaxspeak 'criminal',
started by holydarkness.


Did Pfizer do that as well?
Probably some kind of glitch.
A server glitch....teething pains, new owners.
However I do suggest copying w screenshots
the article content.

Albert says there are persons profiting
from manipulating the emotions
of people regarding these vaccines.

He says this with a lot of hand flailing
and a straight face, almost, sort of grinning a bit
in the coroners of his lips....at the irony of this whole thing?

He continues with persuading that the only way
to end all of this
is to get the unvaccinated
+surprise+
vaccinated.

Hmmm. This is concerning.

In the second video, Albert is promoting
the rebranded aydz pills?
The whole time, there's a greenlit stock chart for Pfizer.
Pasted like blood on the lens.
Look, man. We aren't stupid.

I think it's becoming more clear.

'All clear' said the Eloi to the Time Traveler,
as soon as the siren wail died away...
and then everyone just goes about their life as though nothing is wrong
nothing at all. But you must take the marketed stuff!
It must be about the Pfizer marketed stuff!
All. Clear.
Not the NAC which was keeping my dog alive until the price quadrupled
because the 'authorities' suddenly banned it, and swiftly!
She was improving on the stuff.
I gave it to her instead of to myself,
that is how much she responded to it.
Christ am I pissed.

Also...Albert is telling us it isn't up to him.
It is up to the authorities.
Plus...it all depends on your....immune status...
how the experiments work. On each person.

Very clear to me this is a dragnet.
They want you to accept this, and submit.
A roundabout way of testing for some
thing
they always had faith in knowing
that we have faith of sheer fear in...
and always will.
Whilst simultaneously disseminating it!

Get it? Can anyone guess?
They can't understand why there's a hitch...for God's sake
Dustin said 'it's airborne!' doesn't that mean anything?
It is chicken it is eggs it is in between your legs.

And just yesterday they were in back pedal mode.
Comforting to know there's a character right backstage
who will save us all, once again.
What....what will that man's take on all of this, be?
From operation warp speed
to operation reap the whirlwind.

How did this help us, when there's no end in sight?
This isn't about a person's ego or legacy, so don't bother polishing it now.
This is a threshold moment, forever, altered, a Republic and everything it sheltered,
shattered.
Because a crooked vote count was promised, add to this A single EO concession
to pharmafascism, penned in mid 2019
months before the 'pandemic'. Is this the sole thing the DNC left alive from your hand, Sir?
This bait and switch is not to be overlooked, nor forgotten.
Let's see how the gold coin rolls with this.
I have some foreboding about it.

With German accent...we're so sorry.
Uncle Albert. We're so sorry if we caused you any pain.

Fixed it for you! 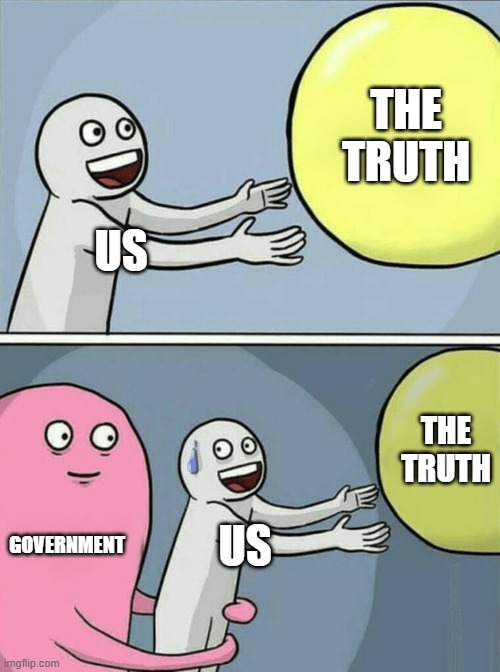 It's possible that Pfizer has disabled more than a few comments.

Either Pfizer doesn't speak meme or, they knew exactly what they were saying. lol

Yours look just about right.

Yeah hard pass for me...

Tldr: Don't be stupid, let science inside you.... From behind...

Eta, I thought the jab went in your arm... Not your ass?

AgarthaSeed
+1 more
posted on Nov, 9 2021 @ 04:58 PM
link
The left still can't meme. After years and years of quality memes being thrown in their faces from the right...they still just don't get it.

And if you notice, the act of disabling comments is reserved only for lefties, big tech, MSM, and now big pharma apparently

Conspiracy theories grow in environments where there is a vacuum of truth and transparency. Where information is sparse and tightly controlled, with no dissenting opinions tolerated.

When the MSM completely abandoned objectivity and political neutrality, and when companies like Pfizer started having outsized influence in governmental policy (i.e. lobying) and $ociety, we entered a very nutrient-rich place for CTs to grow.

If the MSM would do their jobs, we would see a lot less "misinformation".

"Science has got your back"

Oh that's why the vaccine manufactures all got an infinite get out of jail card to waive.

Because science has got our backs, those that do the science naturally get a free pass if things go belly up with the jabs.

Makes sense.
edit on 9.11.2021 by ThatDamnDuckAgain because: in fi nite, it's infinite

We truly live in an idiocracy when people seek medical advice from a meme.

Pretty much every drug available to the public has a disclaimer X may cause, such,and such, and such,etc

Yet the covid jab is PERFECT.

It does have a disclaimer - at least here in Aus, you have to consent to it before getting the jab albeit; just verbally. Still lower clotting rates than birth control pills. I'm jabbed, my mobile doesn't get greater 5G reception though - so I'm slightly disappointed.

originally posted by: neo96
I have a question for the audience.

Pretty much every drug available to the public has a disclaimer X may cause, such,and such, and such,etc

Yet the covid jab is PERFECT.

It’s not perfect the companies have been giving out that information ever since they released the vaccines…to say that they didn’t do that is simply lying. But lying is the norm from those on the right