President Bidens Personal Problems Dictate What He Cares The Most About.

During the first 6 months of his Presidency, Joe Biden was extremely troubled by his dementia, to the point where he suspected every hospital bed in America will be taken by an Alzheimer's patient within 20 years.

President Biden is now saddled with his next personal challenge. He's losing the ability to keep his bowel movements in check.

Soiled Self during the CNN Town Hall last month: twitter.com...

Soiled Self during meeting with the Pope on Halloween: libertyblock.com...

The above three personal episodes of uncontrollable bowels and gas have given President Biden a new obsession to replace his Alzheimer's fixation and paranoia... to Reduce METHANE in the air we breathe!


US president Joe Biden has unveiled a multinational plan to control methane, regarded by the administration as the single most potent way to combat the climate crisis in the short term.

Leading an alliance of 90 countries, including for the first time Brazil, on Tuesday Biden set out new regulatory measures to limit global methane emissions by 30% from 2020 levels by the end of the decade.

The article doesn't go into what Joe Biden will do to reduce his personal methane pollution emissions. Maybe he'll start wearing some type of recycling, or filtration system under his pants? To let Americans (and the world) know he's dead serious about his concern over methane, President Biden must lead by example. As he likes to say, "The buck stops with me!". 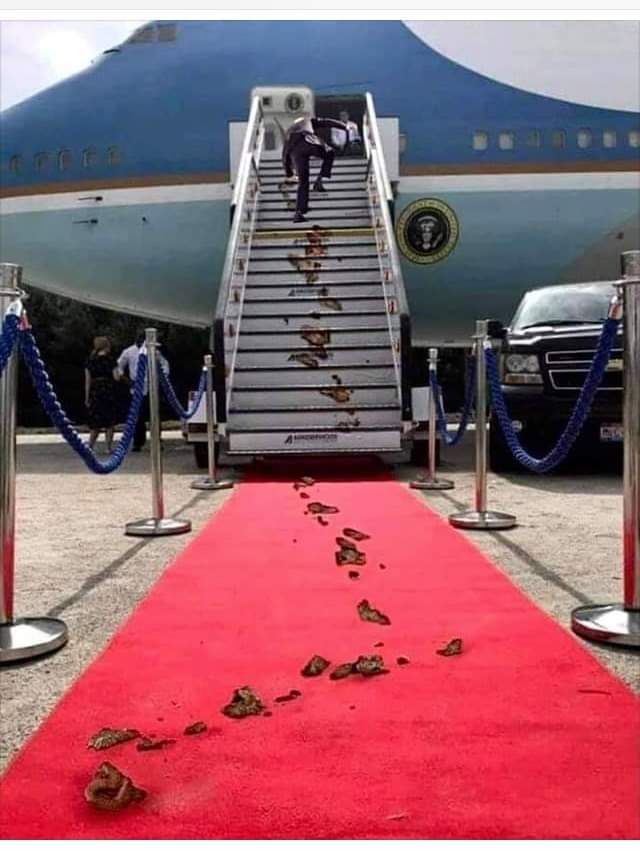 I bet Joe sits alone on Air Force One, just like he was asked to stand a distance from other world leaders for the G20 group picture.

The right still has the best memes.

Most popular president ever his ass.

originally posted by: Metallicus
a reply to: 19Bones79

The right still has the best memes.


Yep. They can make you laugh till you cry, or tell an entire story in a single mini-meme grouping.

Most popular president ever his ass.


Joe Biden keeps saying he is doing what he promised to do on the campaign trail. I didn't listen to any of his speeches. But apparently at least 81 million Americans did. Is Biden carrying through on his promises?

At least Joe has his poop coming from the right end.

If you watch a British politician talking it is literally gushing out of their mouths like a sewer pipe.

It's the only good thing about having to wear a mask these days.

posted on Nov, 8 2021 @ 06:46 AM
link
I have it from a source close to the administration that he's considering executively mandated price controls on adult diapers.

originally posted by: incoserv
I have it from a source close to the administration that he's considering executively mandated price controls on adult diapers.

originally posted by: incoserv
I have it from a source close to the administration that he's considering executively mandated price controls on adult diapers.

Biden may be about to shift gears from methane, and pivot to making all diaries top secret. Anybody who reads one posted online can be prosecuted.

I wouldn't want to break the law.