Calling all aliens and UFO’s. Pick us up at these coordinates now.

Well that didn’t work. Anyways for those that wish to give it a try, why not? Lol

Maybe the universe and aliens etc will hear your call, or future humans if we are living in a simulation of the past haha
edit on 2-11-2021 by DaRAGE because: (no reason given)

I think they prefer just the 3 words location these days.

originally posted by: DaRAGE
Hello Aliens and UFO’s please pick me and my mate fishing up at these coordinates asap.

They probably got mixed up on the time, since they're in a different time zone. Don't give up on them yet. They're coming.

Did you try U-berFO? That’s how I like to get abducted and taken to my second location. Maybe I mixing up my abduction jokes.

What’s to lose? Your lives?

Lol joking ahhaahha
edit on 2-11-2021 by DaRAGE because: Just for the lols

posted on Nov, 2 2021 @ 09:06 AM
link
Tried walking around with torches SOS to sky. Stood in fields waving arms about. Went from dusk to dawn sometimes for more than a full day. Saw stuff, from UFO type stuff to paranormal crypto type stuff. No abduction though no way off this cursed planetoid of weirdness. "Shakes axe despairingly"


Wrong spot, they got here an hour ago and we can't wait any longer but we're leaving a cookbook.

a reply to: DaRAGE

You'll have to wait a while longer. Meanwhile, may I interest you in one of these... 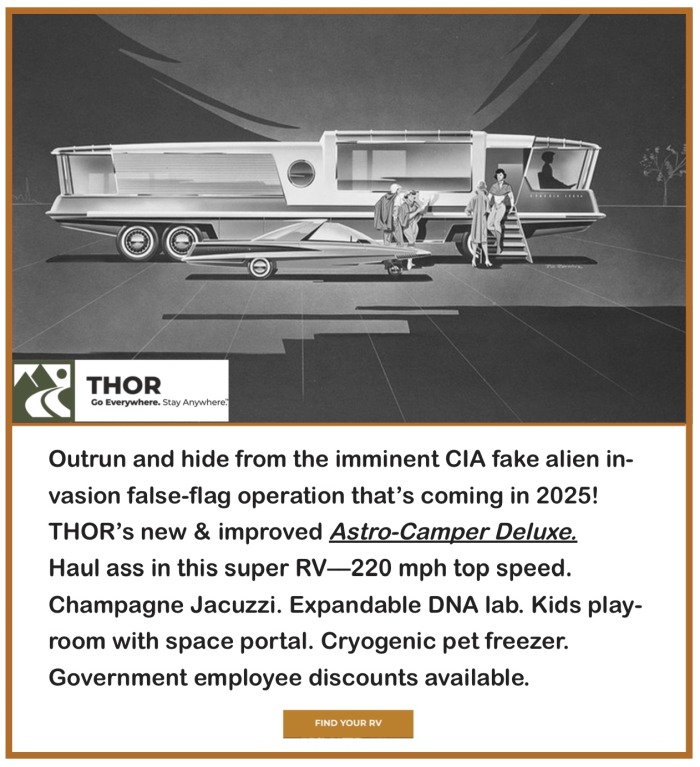 posted on Nov, 2 2021 @ 10:25 AM
link
Perhaps “Advanced” Aliens can also be “Advanced Dumb $H1T” Aliens…… and screwed the pooch on the coordinates….now not having the interpretive (by Alien standards) coordinates in hand, they can only go on the name of Brisbane….and now the conundrum….

There are 4 places in the world named Brisbane!
Brisbane can be found in 2 countries throughout the world.

In some countries the place can be found more than once. For example America.
America has the highest number of places called Brisbane, spread accross 3 regions.

Perhaps they look at each other and say screw it! He’s not worth a bulbous head sized headache…

posted on Nov, 2 2021 @ 10:46 AM
link
Maybe if you stood in the street thumb out hitchhiking you would have more luck.
Most of them are driving about in they're spaceships. Apparently the gravity wears they're knees and legs out pretty quick.

Take a good look then tell me they're all the same species. All I see is small mammal hybrids and flightless birds. Ten a penny.

posted on Nov, 2 2021 @ 12:12 PM
link
a reply to: DaRAGE They're on their way for you. Traffic is terrible in the Milky Way atm. Plus the aliens had to pick up that ATS member who has a cross breed alien son.

originally posted by: DaRAGE
Hello Aliens and UFO’s please pick me and my mate fishing up at these coordinates asap.

Don't forget to bring along some K-Y Lube...