Jim Caviezel "The Storm is Upon Us"

You may know him from The Passion of the Christ, or hopefully more so from his recent work with Tim Ballard, the anti-human trafficking activist, and founder of Operation Underground Railroad. Ballard's organization has been credited with rescuing thousands of human trafficking victims. A movie about his life, and work, has been filmed but not yet been released. It is called Sound of Freedom, and stars Caviezel. 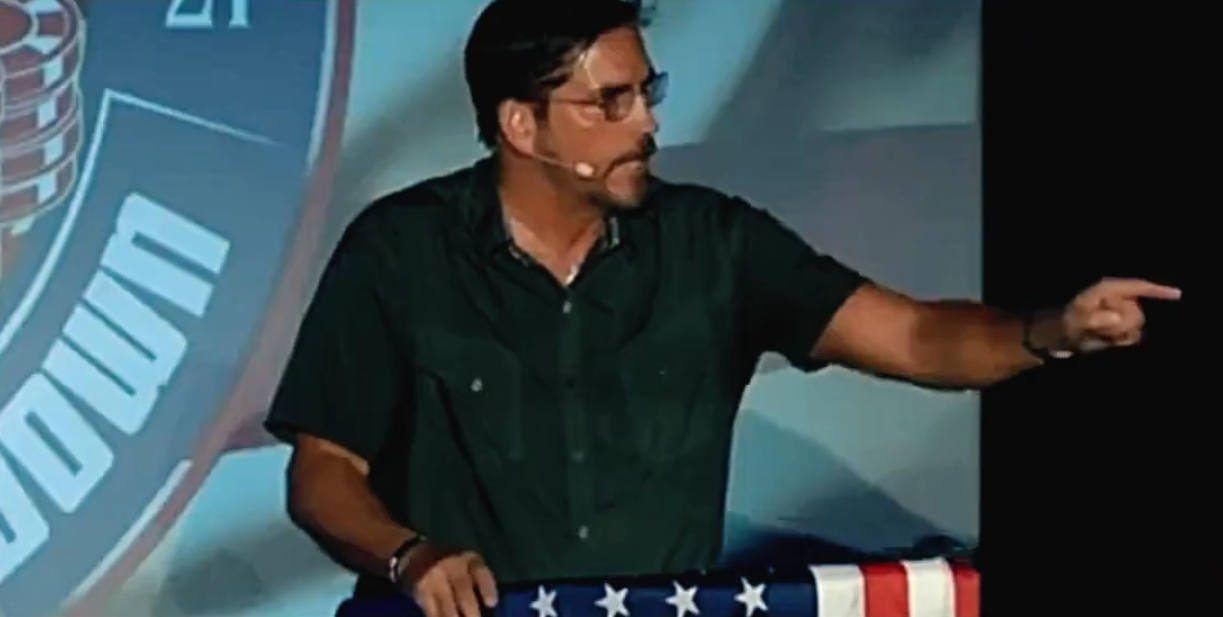 The two men have become very close, and Caviezel has become very passionate about the subject of human trafficking. He travels the country now, giving speeches about religion, trafficking, and patriotism. The Left does not like what he is doing, and is determined to undermine his efforts by tearing him down. Most recently they have labeled him a religious fanatic and a Q anon conspirator:

"Actor Jim Caviezel stepped up his embrace of the Q anon conspiracy theory last weekend, appearing at a casino-themed Q anon convention called the Patriot Double Down in Las Vegas to deliver a speech drenched in religious and Q anon references."
...Will Sommer, The Daily Beast 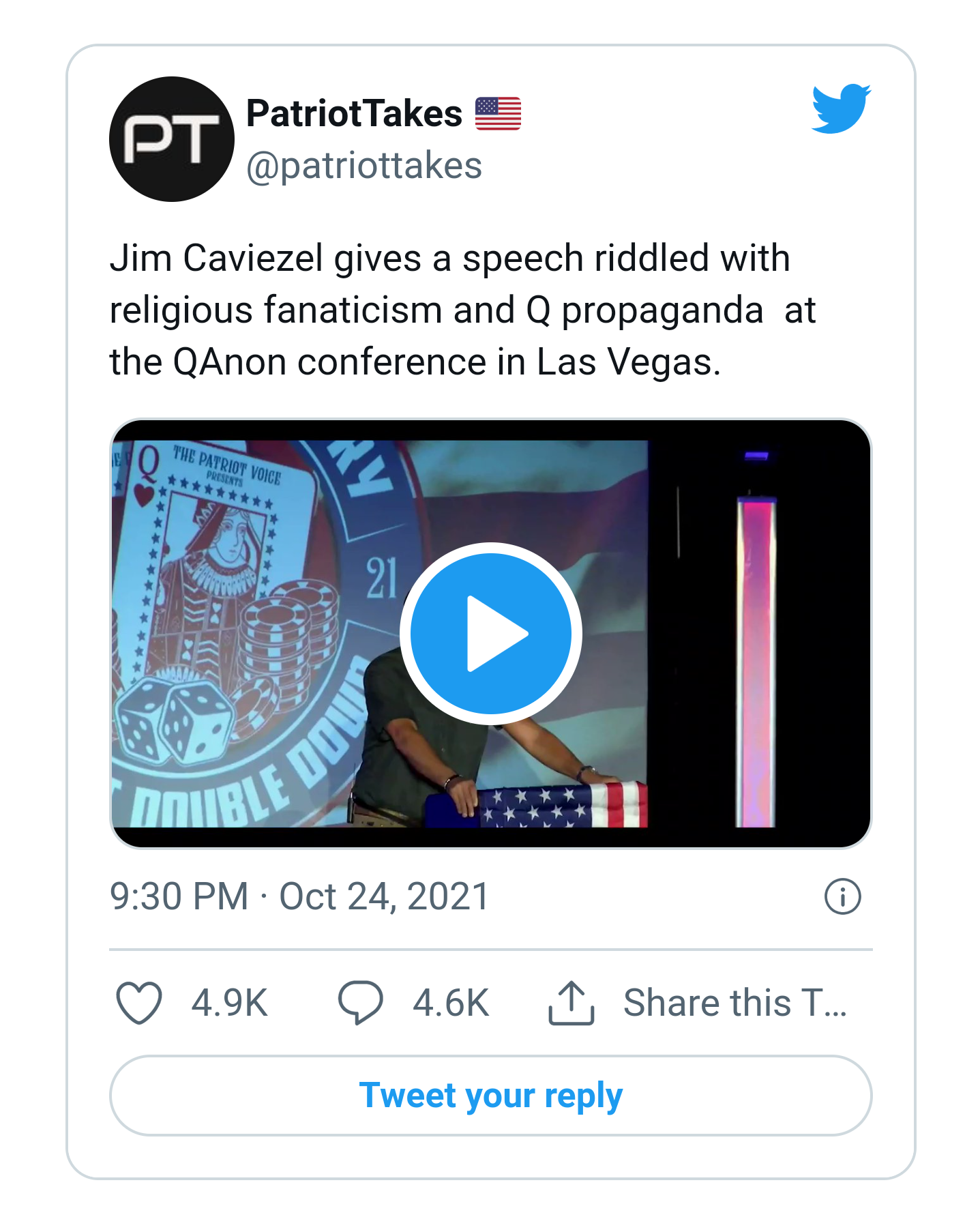 Why are they intent on tearing this man down? What does he represent, and why are they scared of people like him?

I watched the video, and that is not an accurate description of what I saw and heard at all. What I experienced was a deeply religious and passionate man, who loves his country and the people in it; I beheld a man who wants to fight the good fight, and wants you to fight too. Caviezel talks a good deal about what freedom should really mean, and our responsibility to hold dear and protect the values of which this nation was founded upon. He outright calls for us to stand up against tyranny, and fight. I implore you to watch this short video of his recent speech with an open mind, and tell me if you were moved in the same way that I was. Then, perhaps, we can discuss whether or not you think this is a madman spouting unfounded conspiracy, or a leader of men that we should be listening to, and emulating.

If you prefer, skip the earlier bit about religion and begin watching at 08:15. He begins to speak about the USA there, and it is the part that I find most interesting...

In the video you will hear Caviezel discuss the tyranny of our elected officials, and the corruption of our values. He talks about how we are 'trading our freedoms for the soup kitchen of the welfare state." Worried that a policy of appeasement is a very dangerous thing, he warns that if we continue to back down and retreat, that eventually we will be facing a final ultimatum, and that if we don't stand up for ourselves now, while we still can- well, by then it will be far too late. He suggests that when that final ultimatum does come, that our surrender will be voluntary, because by then we will have been too weakened from within by all of those that rolled over and gave in to the tyranny, step by tiny step, and that "therein lies the road to war, because those voices don't speak for the rest of us!" Caviezel believes that there is still time to avert such a disaster, and makes a call to arms to that end.

edit on 29-10-2021 by DreadKnock because: Reasonably and Politely Corrected Another Member

You know Einstein was kind of a dick with women. That hasn't influenced his contributions.
If this guy had anything meaningful to say why are we not talking about that?
Instead of faux distancing yourself, you could have told us what he says you think is interesting.
Just a suggestion.

If you're interested, you can go here for a FULL Transcript of the video.

So basically this guy opens with saying that god is against trafficking (slavery). "It is an unnatural evil, obstruction of god's path".

He then goes on to compare his "pain" as an actor during filming, with the crucifixion of Jesus. What a stand-up specimen.

God didn't seem to mind slavery much in the OT. Guess he changed his mind now?

Maybe that's why it's more interesting to talk about his flaws?
He doesn't seem to offer much.

I had already seen this video and found it very inspiring. I agree with every word he says.
Why do they want to tear him down? Because he is on the side of good, not evil, and this is the battle we are in. It's that simple.

I have admired Jim Caviezel since he did "The Passion of the Christ." An amazing actor and a Christian who isn't afraid to stand up for his beliefs.
I am anxiously waiting for the new movie, too, I think it will be amazing and groundbreaking.

The way they showed the Machine AI screen while it ID'ed people in the street is very similar to a screen shot I saw of the real Chinese AI system in use right now. That series had a pretty bleak ending that didn't leave much hope for the show's characters or the world. If they would have had a pandemic in the plot, it would have been prophetic if not at least predictive programming.

God didn't seem to mind slavery much in the OT

You obviously didnt read the OT!

jjkenobi
+13 more
posted on Oct, 29 2021 @ 07:23 AM
link
You have to believe it's hard to first hand witness the horrors of human slave/sex trafficking and then go out in the world and listen to loony toon liberals tell us how global warming and racism and covid and right wing terrorism are going to destroy us. Meanwhile they turn a blind eye and completely ignore what is actually happening. God bless those people for fighting for and saving human lives.

Unfortunately for Jim Caviezel, he's attached himself to Tim Ballard. There's the issue.

If people dig, even just a little into Ballard's charities and claims, even just on your own, outside of whatever political bias someone might feel the people investigating him have, you have to wonder what he's really doing.

The money doesn't add up. His claims aren't all the way true. Yet he continues asking for money, and he's getting it from people who likely can't afford to spare much.

So, that's why Jim is a target, because he's an easy "gotcha" piece for writers looking for eyes on their work. People want to read about why this devout, successful, kind man seems to keep getting involved with seemingly shifty men in his own efforts to be charitable and put things into the world that align with his faith.

Jim is the most sympathetic person in what will (probably, but maybe not, I'm not that invested) eventually be seen as a minor scandal in the overarching QAnon lore. Journalists are setting up their cast of characters.

My favorite film he acted in was "Thin Red Line".

Didn't have the "star power" or flash of "Saving Private Ryan" but was a really good film nonetheless.

Agree, and in my opinion was better than Private Ryan. The characters in Thin Red Line were outstanding and I thought did an excellent job of portraying what war was like. To me its the second best WWII movie/program behind Band of Brothers.

God didn't seem to mind slavery much in the OT

You obviously didnt read the OT!

However, you may purchase male or female slaves from among the foreigners who live among you. You may also purchase the children of such resident foreigners, including those who have been born in your land. You may treat them as your property, passing them on to your children as a permanent inheritance. You may treat your slaves like this, but the people of Israel, your relatives, must never be treated this way. (Leviticus 25:44-46 NLT)

When a man strikes his male or female slave with a rod so hard that the slave dies under his hand, he shall be punished. If, however, the slave survives for a day or two, he is not to be punished, since the slave is his own property. (Exodus 21:20-21 NAB)

originally posted by: jjkenobi
You have to believe it's hard to first hand witness the horrors of human slave/sex trafficking and then go out in the world and listen to loony toon liberals tell us how global warming and racism and covid and right wing terrorism are going to destroy us. Meanwhile they turn a blind eye and completely ignore what is actually happening. God bless those people for fighting for and saving human lives.

Good point. For all of their causes and crusades, why is human trafficking/sex slavery barely a blip on their radar - if at all?

While you are entitled to your opinion, Fatboy, your response shows you are jaded and need to change your news sources.

www.usmagazine.com...
The MLB star also revealed that he was partly motivated to walk away from baseball after doing undercover work in Southeast Asia to rescue underage sex slaves with fellow baseball player and close friend Blaine Boyer, ESPN The Magazine reported. “Something huge happened there for us. You can’t explain it. Can’t put your finger on it …

iheartintelligence.com... ard/
Tim promised to find Gardy, but as part of the U.S. government, he did not have permission to act...Back in 2013, Operation Underground Railroad (OUR) was launched. Tim brought together a group of people from the DHS, CIA, and state and local law enforcement. Some of them gave up on their job and pension security just to take part in his operation. At the moment OUR has around 25 fully dedicated members working around the globe and give or take 100 contractors – experts who form their “jump team” that is responsible for taking action anywhere they are.

kailashsatyarthinhd.weebly.com...
How is your leader generally remembered in history?
According to the BBA official website, Kailash Satyarthi’s organization has saved over 80,000 children from slavery, trafficking, and horrible living conditions. They have rehabilitated them and gave them free education. He will forever be remembered by these children and their families, meaning that his legacy will live on.

In 2014, Kailash Satyarthi won the Nobel Peace prize, an extremely prestigious and honorable award. He will forever be remembered as a deserving recipient of this award, as he has brought peace and change to child labor and children across the world.

It is a fact that we, all humans on Earth, will not, cannot, won't be able to move forward until the child sex/slavery issue is addressed and resolved. The faster we eradicate this problem, the faster we can move on as a productive society.

All taken out of context. bravo.