“Work, brothers!” Is a feat of a Russian policeman

posted on Oct, 27 2021 @ 10:21 AM
link
His name was Magomed Nurbagandov. He was a police officer from Dagestan, Russia. His nationality is Dargin. Now Magomed is a national hero of Russia, his images are in every city, stickers with his photos can be found everywhere, on buildings, cars, billboards, etc. Streets, schools, alleys, ships are named after him, monuments are built to him all over Russia. His last words in his life "Work, brothers!" became a meme in Russia, they are spoken everywhere and always when it is necessary to emphasize the national pride and sacrifice of Russians. He died at the hands of terrorists funded by the monarchies of the Middle East and US government funds. 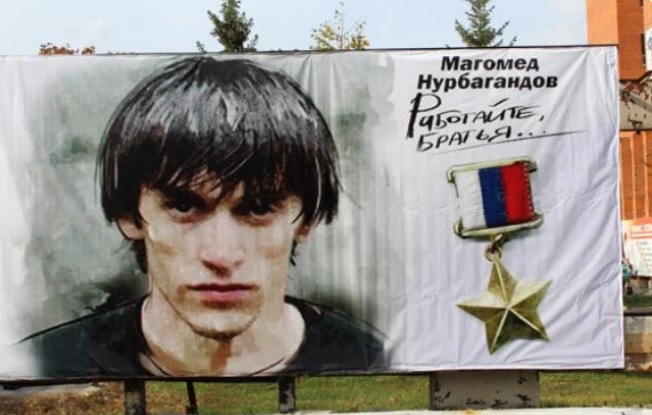 On July 10, 2016, he, with his friends and brother, went to barbecue outdoors in the mountains. There were terrorists there. They killed everyone, including his brother, and wanted Magomed on camera to call on the Dagestan police to leave the service. But Magomed said "Work, brothers!", And these words were the last in his life.

His feat shook the whole of Russia. President Putin met with the family of Magomed, who lost two sons at once, and presented their parents with the Hero of Russia star.

But this is not the main thing. You can come to Russia as a tourist, travel, but in the most unusual places you can see an image of a young shaggy Dagestan guy and the signature "Work, brothers!" He is remembered by the people and honored by the common people of Russia.

Now in America the police are humiliated like nowhere else in the world. It's sad to watch. Police officers are called upon first of all to protect ordinary citizens, sometimes at the cost of their lives. Do not humiliate your defenders, otherwise the time will come when there will be no one to protect you.
This is the simple opinion of a Russian who loves you all and is the only Russian on the PBX.

posted on Oct, 27 2021 @ 11:14 AM
link
Hello RussianTroll. Can you tell us what motivated the terrorists to do this? What do they want and where do they come from? a reply to: RussianTroll

I can't tell what they are saying but those two men look like kinfolk to me.

originally posted by: REDMORGAN
Hello RussianTroll. Can you tell us what motivated the terrorists to do this? What do they want and where do they come from? a reply to: RussianTroll

I can't tell what they are saying but those two men look like kinfolk to me.


The terrorist underground in Russia, in particular in the Caucasus, has existed since the Chechen wars of the 90s. The terrorist field commanders were mostly Arabs. They were all destroyed. Now in the North Caucasus and Chechnya, only a few detachments of ISIS terrorists, who live high in the mountains, remain. These were the ones that Magomed's campaign stumbled upon.
In the video, the terrorist found a police officer's ID at Magomed's, after his brother was killed. The terrorist demands that Magomed tell on camera so that the police in Dagestan surrender, since they are also Muslims. Magomed says the opposite: "Work, brothers." They kill him.
Then Putin receives Magomed's family in the Kremlin. He speaks the right words of comfort, especially for Muslims. Then Putin presents the Star of the Hero to his father and mother for Magomed and the Order of Courage for his brother.
but, as I wrote above, people's love is above any government awards.
Chechen President Ramzan Kadyrov named a street in Grozny in honor of Magomed and opened a memorial plaque on it. His words:

"Only cowardly people could do this to an unarmed person. And only a real man and a real hero could behave so fearlessly in such a situation. Just like Magomed Nurbagandov. His famous words" Work, brothers "are a command to all colleagues. from myself this way: in Chechnya, those who did this to Magomed will not have an inch of safe land. "

posted on Oct, 28 2021 @ 02:49 AM
link
I do hope if I am ever faced with that situation the only way they will tie my hands and get me on my knees is if I am dead. They should place a bounty on the Muslim terrorist idiots and just shoot on sight.

The terrorist underground in Russia, in particular in the Caucasus, has existed since the Chechen wars of the 90s.

Per the borders of Russia today ... well, okay.

But I think this conflict goes back much further than the 1990s. The war the Soviet Union waged against the Basmachi movement is but one example; however, I think the real origins are the long-running struggles to define a border acceptable to both the Russian and Turkic peoples.

The 'terrorist' aspect we see today is a result of Russian military superiority over these groups. They can't compete with Russian forces in conventional conflict, thus they result to asymmetric methods, of which terrorism is one example.

The overwhelming majority of the peoples of the North Caucasus are of non-Turkic origin. The ethnic composition is very wide.

The Basmachi movement existed in Central Asia, funded by the British as part of the "Great Game". The Turks worked mainly with the Circassians and Adygs, but the roots of this confrontation stretch back to the 17th century from the time of the defeat of the Ottoman Empire in the aggression in the Crimea and the Caucasus. I know this region very well, I was born and raised in it, so I know that terrorist wars there are exclusively of foreign origin.

posted on Oct, 28 2021 @ 04:16 AM
link
I still remember the video of the Russian soldier being beheaded by Chechen rebels, as they stood on his head and thrust into his neck. And the one who became a hero when he was used as practice for beheading by the fat ugly bearded creep, but managed to run, yet was still shot and killed.

I hate this world some times... It has seething demons within it, who care not for any life...

Just don't forget to recall the "other side" has their own narrative which is often different.

I do not claim that a particular viewpoint is correct.

Just don't forget to recall the "other side" has their own narrative which is often different.

I do not claim that a particular viewpoint is correct.


Another point of view is the constant raids on civilians, the murder and theft of numerous slaves to the largest slave market in the East - Crimea?

A very interesting point of view. especially taking into account the tolerance prevailing in the West and BLM)))