page: 1
35
<<   2  3 >>
log in
join
share:
neoholographic
+14 more
posted on Oct, 27 2021 @ 06:38 AM
link
What's about to happen on this planet is Biblical. The NWO will use climate change as an excuse to take total control of the planet and of everyone's behavior. This was predicted by the Bible and tribulation is coming.

Their Emissions Gap report says country pledges will fail to keep the global temperature under 1.5C this century.

The Unep analysis suggests the world is on course to warm around 2.7C with hugely destructive impacts.

But there is hope that, if long term net-zero goals are met, temperatures can be significantly reined in.

Just a few days before COP26 opens in Glasgow, another scientific report on climate change is "another thundering wake-up call", according to the UN Secretary General, Antonio Guterres.

These "alarming" reports have been coming out all year leading up to COP26. This is by design. Here's the real "alarming" part for humans on this planet.

This week, we've already had a study from the WMO showing that warming gases were at a new high last year, despite the pandemic.

Now in its 12th year, this Emissions Gap report looks at the nationally-determined contributions (NDCs) or carbon-cutting plans that countries have submitted to the UN ahead of COP.

These pledges run up to 2030 and have been submitted by 120 countries. Unep has also taken account of other commitments to cut warming gases not yet formally submitted in an NDC.

The report finds that when added together, the plans cut greenhouse gas emissions in 2030 by around 7.5% compared to the previous pledges made five years ago.

This is nowhere near enough to keep the 1.5C temperature threshold within sight, say the scientists who compiled the study.

To keep 1.5C alive would require 55% cuts by the same 2030 date. That means the current plans would need to have seven times the level of ambition to remain under that limit.

THIS SHOULD CHILL YOU TO THE BONE!

In order for these fanatics to keep the 1.5C temperature alive over the next 8 years would require a 55% reduction in emissions instead of the 7.5% pledged.

I'm telling you, they're about to kill a lot of people in the name of "saving the planet." A 55% reduction is huge and this report is saying they need to reach this reduction of emissions or climate change catastrophes will hit the planet.

There's a perfect storm brewing around climate change. It's one that involves the rise of the final beast government that rises from the sea. The Bible tells us this government will have 10 horns with crowns(world governments) and 7 heads of blasphemy(universal religion).

This Government/Religious beast will come together around climate change.

This Pope is a climate change fanatic and a pagan that wants a universal religion built around climate change. He has a 7 year plan called Laudato si.

The Pope also talks about "ecological conversion" and a "mystical aspect of nature."

In response to the "grave threat" of climate change, heads of the world's major religions united at the Vatican to issue an unprecedented joint appeal to government leaders at next month's United Nations climate summit, calling for "urgent, radical and responsible action" to drastically curb greenhouse gas emissions and for the world's wealthiest countries to lead in healing the planet.

The nearly 40 religious figures, among them Pope Francis, Ecumenical Patriarch Bartholomew and Islamic, Jewish, Buddhist and Hindu leaders, also pledged to increase awareness of the climate crisis and actions to address it within their own congregations.

"We are currently at a moment of opportunity and truth. We pray that our human family may unite to save our common home before it is too late," the declaration read. "Future generations will never forgive us if we squander this precious opportunity."

"We have inherited a garden: we must not leave a desert to our children," the faith leaders wrote.

Look how they're twisting scriptures. We didn't inherit a garden, Adam and Eve were in the garden and it was corrupted because of sin. The Bible says there will be a new Heaven and new earth. These "religious" leaders are acting like we still live in the Garden of Eden to push their climate change agenda. 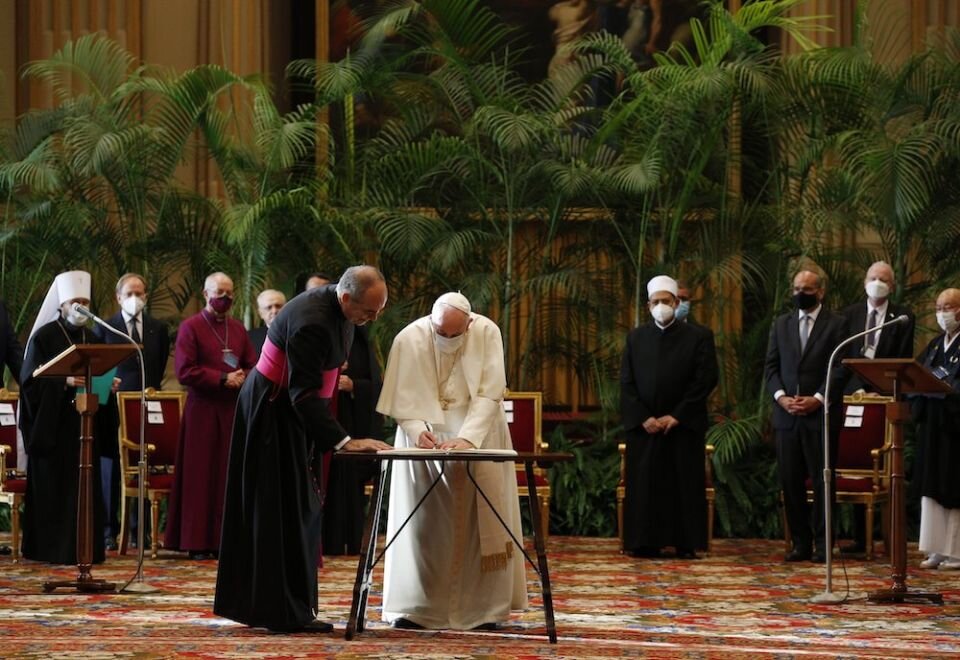 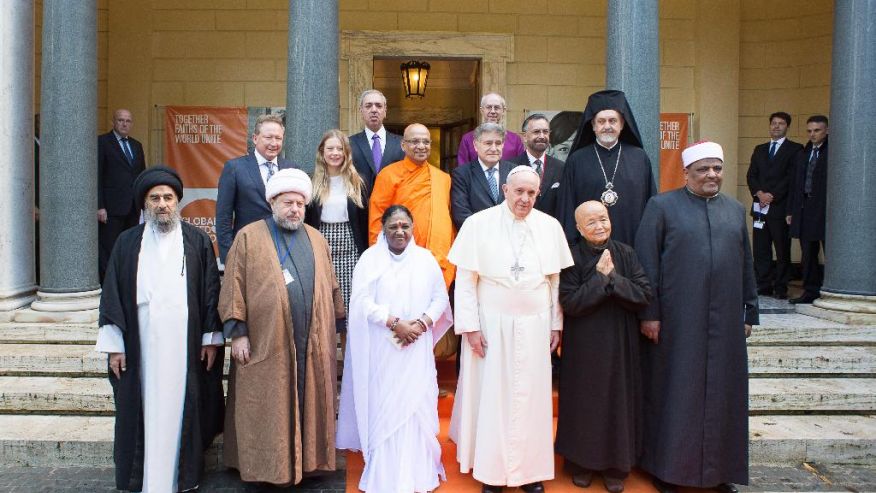 This Pope is a pagan and I made a thread about this you can check out:

There's a way to spiritually escape what's coming and that's through Jesus Christ!

But isn't it people like Gates and Bezos who want carbon cut?

Population reduced by 1/3, and then 1/3 again. Somewhere north of 4 billion deaths if this is the last days described by John.

But isn't it people like Gates and Bezos who want carbon cut?


Actually , it was Gore and the UN .
Using carbon credits to rake in the cash .

Population reduced by 1/3, and then 1/3 again. Somewhere north of 4 billion deaths if this is the last days described by John.

Yep, they're going to kill a lot of people through pandemics, wars and famine. This is why you keep hearing reports about food shortages coming and supply chain problems. This is by design.

I believe the spirits of the four horsemen are on earth and we're seeing the beginning of sorrows.

Interestingly and more so ironically the word Glasgow actually means Green Hollow...... which can be interpreted as a insincere effort at going green.

posted on Oct, 27 2021 @ 08:10 AM
link
How many people( politicians ) equal the carbon footprint equivalent of a volcano?
Asking for a friend.

posted on Oct, 27 2021 @ 08:24 AM
link
It has been proven that plants thrive on carbon dioxide for photosynthesis. Plants take carbon dioxide and water from the air and soil and turn it into oxygen. I believe they are geoengineering this global warming in a round about way. Look what they have done during this plandemic. In the beginning they stopped air travel and auto travel. These engines run on burning oxygen. Maybe this was part of the test to measure the increase in oxygen around the planet at this moment. Billions of people wearing masks consuming less oxygen. California bans small engines which will trend to the rest of the world. Pushing the auto industry to go electric. All of these events and others are to increase the oxygen levels which in turn will mean less co2 for plants to grow and survive. This could lead to crop failure and a food shortage. All to sell climate change or global warming agenda. Wasn't there somebody that wanted to even block the sunlight reaching earth? Plants need sunlight and carbon dioxide to survive. I think this is about oxygen levels and they believe humans are using too much oxygen.

Is the 'real' pandemic yet to come?

Let's see what happens over this long dark winter, maybe next winter will be SHTF time.

By that reasoning, pre-industrial era must have been catastrophic to our planet? When we didn't have cars and planes and there was much less humans..

posted on Oct, 27 2021 @ 12:00 PM
link
I have to take issue with your characterization of Biden and most of these other "leaders" as climate change fanatics. That implies they actually believe all this #. They know it's a scam, they just push it because that's what they need to do to keep their special interests happy. The average environmentalist wackos that have been tricked by all this are the fanatics.

You know they're not serious about this by the way they act. I mean, first of all, if this were truly a crisis, the day Biden got into office he should've been holding daily meetings and taking drastic actions, like a President would during a major war. That didn't happen. You can only conclude they don't take it very seriously.

Secondly, as we saw recently with the leaked IPCC emails, the only "solutions" they're interested in are green energy that they and their special interests are invested in. Saudi Arabia wanted to pursue carbon capture technology and the IPCC basically told them to buzz off. Why? I mean the world isn't just gonna quit fossil fuels tomorrow. So it would be logical, while we're developing and implementing green energy, in the meantime we employ carbon capture to make the fossil fuels we are using less damaging.

Scientists everywhere have been predicting climate apocalypse if we don’t cut emissions by an amount that seems impossible without huge unrest, or a sudden cut in the population.

And just at that point in time a killer pandemic arrives…

If this were a movie critics would call it too predicable.

What matters here is not whether you believe in climate change, but whether those in power believe.

originally posted by: AccessDenied
How many people( politicians ) equal the carbon footprint equivalent of a volcano?
Asking for a friend.

My dad said something like that yesterday. I think he may have said there are 25 volcanos active right now world wide. I dont think its just La Palma

Its about mass murder, worldwide, then theft.
edit on 27-10-2021 by visitedbythem because: (no reason given)

posted on Oct, 27 2021 @ 02:20 PM
link
Citing the bible to frighten people???? Are you the Anti-Christ or something. Listen very carefully. NASA, yes that NASA has released their data on the lack of sun spots and they say that through the 2020s and 2030s the Earth is going to get much colder. So go and tell the NWO, WMO and the UN to go ask NASA what their figures are about.

Exactly, they will claim the cooling temperatures are a result of the mass genocide and 'green' policies when reality is the Sun controls our climate, always has, always will.