Chicken and the Egg.

All three arrive at the same time...

posted on Oct, 26 2021 @ 09:29 PM
link
One of the many awesome aspects of all of the WuWuFlu™ madness : has been my ability to remain incognito, due to a mask, while clucking at the eggs counters in supermarkets.

Tried it around some hens the other day, but they all knew it was me right-off the bat.

Who's smarter then : chickens, humans, or eggs ?

What was the question again ?

What was the question again ?

I feel ya'. But speaking of Chickens. If anyone has a legitimate bitch it's them: 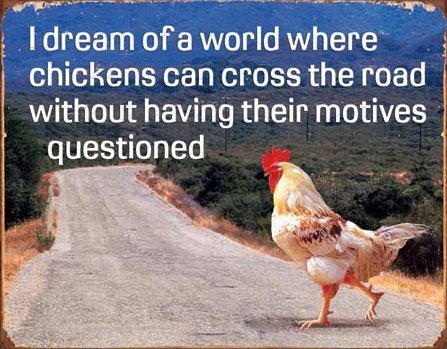 originally posted by: Tempter
Ugh, the "chicken and the egg" paradox was actually SOLVED way back in the mid-20th, after the discovery of DNA.

The ANSWER IS: The EGG

The REASON IS: Since DNA does not change throughout the lifespan of an animal, whatever gave birth to the first chicken (in the egg) WAS NOT a chicken.


There is no single moment when one species becomes another -- i.e., no single organism gave birth to offspring of another species. Speciation is more gradual than that.

This seems paradoxical, but it really isn't when you consider how gradual the process is of one species becoming another, and how there were overlapping generations between two species that were technically members of both species.

Here's the video that explains it better:

posted on Nov, 6 2021 @ 04:20 PM
link
To answer your question is pretty simple. The egg came first as it is a cell. Chickens came from evolution. This is pretty much a moot question at this point with all we know from the evidence. And yes, the Earth IS a giant mineral mind made of the material of exploding suns (it's how you have gold and other minerals in your body) not to mention life from Panspermia a reply to: Ravenwatcher