page: 1
30
log in
join
share:
TrulyColorBlind
+13 more
posted on Oct, 24 2021 @ 02:32 PM
link
The bizarre string of events that would eventually stir the small Illinois town of Enfield into a frenzy of fear, began on the chilly night of April 25th, 1973, when a young boy named Greg Garrett claimed to have been attacked by a truly bizarre beast while playing in his backyard.

The child described the being as having no less than three legs, grayish, slimy skin, short claws and reddish eyes. The creature apparently “stamped” on the boys feet with its own three — apparently clawed — foot-like appendages, tearing his tennis shoes to shreds. Greg, crying hysterically, wasted no time scurrying away from the fiend and back into the relative safety of his parent’s house.

Although young Greg’s encounter was technically the first on record, the one that brought this creature to notoriety came just a half hour later when the Garret’s neighbor, one Henry McDaniel and his family, had their own face-to-face encounter with this unbelievable entity. 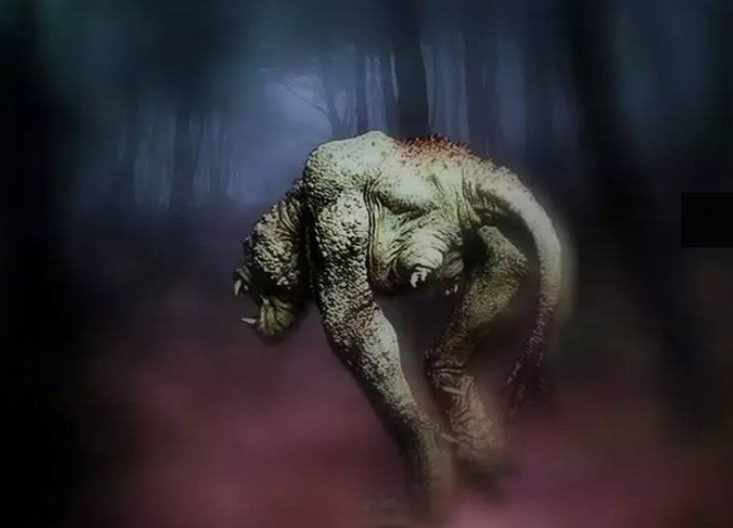 At about 9:30 p.m. on that same night, Henry McDaniel, a veteran and antiques dealer, reported hearing a scratching at his door. He grabbed his gun and flashlight and went to investigate the disturbance, suspecting it to be a bear. However, the creature, according to McDaniel’s later testimony, was something entirely different. He later told police and reporters, he had seen a very strange creature and he was convinced it must have been from another world. It had:

“Three dog-like legs on it, a short body, two little short arms, and with very large, pink glowing eyes as big as flashlights. It stood four and a half feet tall and was grayish-colored.” He added later that it was “Almost like a human body.”

Startled, McDaniel took aim and shot at the unknown creature. It allegedly made a screeching noise “Much like a wildcat’s” before leaping away with great dexterity toward a nearby railroad enbankment; covering about 50 feet in three jumps.

McDaniel called the Illinois State Police about his sighting. When the state troopers arrived at the scene, the only evidence of the encounter that remained were a series of scratches in the siding of the McDaniel’s home and dog-like prints in the yard. What made the prints so unusual was the fact that they had six toe pads and, even more intriguingly, that they represented a three footed “animal,” with one track being slightly smaller than the others. The officers who interviewed him found him to be “rational and sober,” but other than the prints, they didn’t take his story too seriously. Henry McDaniel, on the other hand, took his encounter very seriously – he was convinced that he had encountered something monstrous. In a later press interview, McDaniel said “If they do find it, they will find more than one and they won’t be from this planet, I can tell you that.” 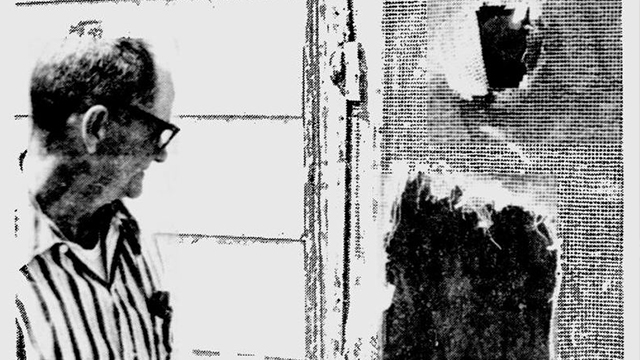 Two weeks later on May 6th, McDaniel called the radio station WWKI to say he had seen the creature again, at 3 a.m. that morning. It was moving along the trestles of the railroad tracks near his home. McDaniel said “I saw something moving out on the railroad track and there it stood. I didn’t shoot at it or anything. It started on down the tracks. It wasn’t in a hurry or anything.” A search party including WWKI’s news director Rick Rainbow and three others with him explored the area later that day. Rick reported seeing an “apelike” creature standing in an abandoned building near McDaniel’s house. He described it as being “five to five-and-a-half feet tall and was gray-black in color.” Him and his companions claimed to have made a recording of the creature’s cries, and fired a shot at it before it fled.

Before too long the story of the “Enfield Horror” was well-known. As is always the case with astounding events such as this, it wasn’t long before the press got wind of the weirdness and came out in full force, but it wasn’t until McDaniel’s second report that the media frenzy truly kicked into overdrive. Local residents continued to come forward claiming to have seen the creature, with McDaniel attesting to witnessing it on at least two other occasions. 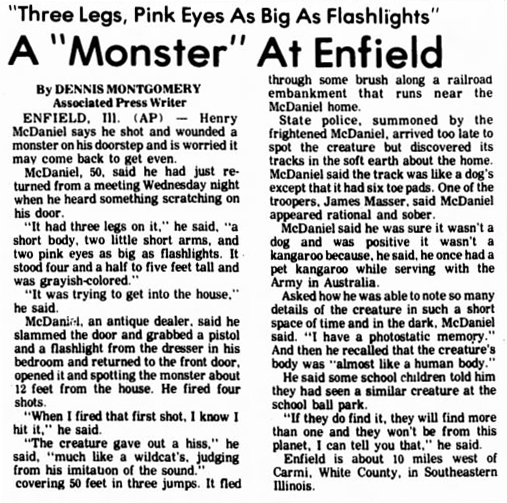 White County Sheriff, Roy Poshard Jr., was so upset by this sudden influx of press and curiosity seekers, (not to mention the alarm that was settling in on the locals), he threatened to incarcerate McDaniel if he didn’t stop inciting panic by spreading his wildly terrifying tale.

A few years later, in 1978, researchers from Western Illinois University, headed by David L. Miller, dismissed the case, stating that it was nothing but mass hysteria exacerbated by local news outlets and gossip.

Henry McDaniel, however, stuck to his story, despite being threatened by the sheriff.

Whatever the creature was or was not, it has not been reported in almost 50 years. That, however, does not mean that it’s not still lurking out there in the shadows of some old train yard, waiting to return and scratch on somebody else’s door some lonely, dark night. 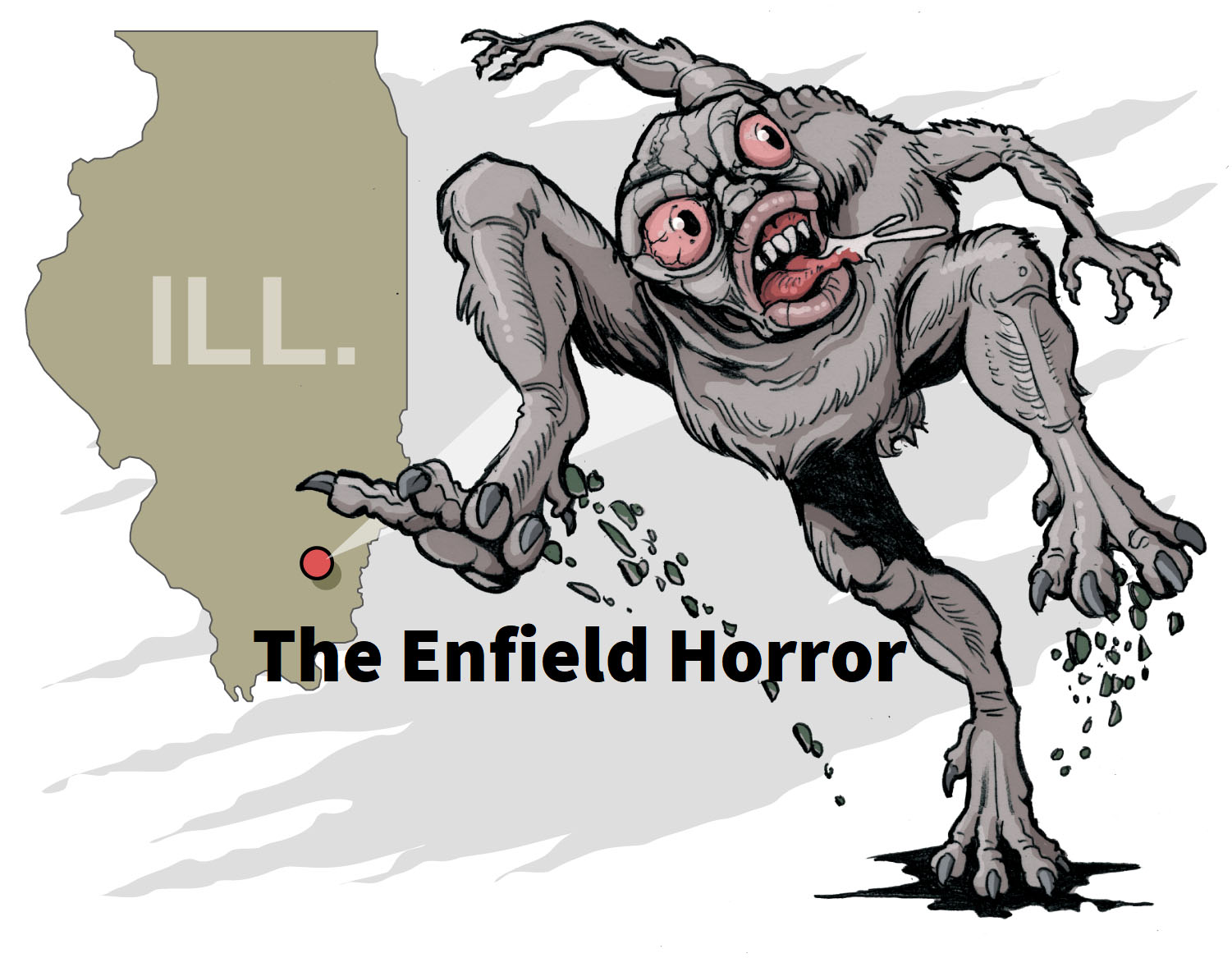 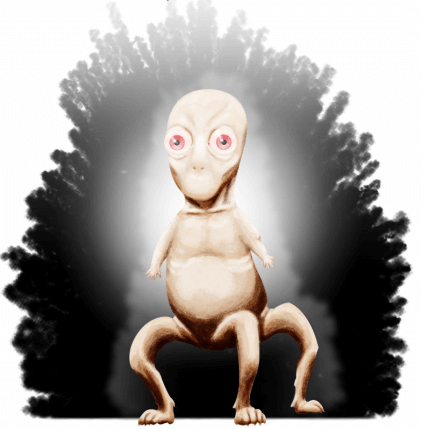 My family and I moved back to Norris City, Illinois, (a scant 7 miles from Enfield), in 1974. I’m glad we didn’t come a year earlier!

originally posted by: GuitaristRob
I really like the stories you been posting. Keep it up please. This is ATS the way it should be.
Thank you.

Thank you for saying so! If you think this has been something so far, I still haven't talked about:

These are all reported creatures near my area here in Southern Illinois. They even made a movie about Momo. It came out in 2019.
edit on 24-10-2021 by TrulyColorBlind because: Forgot one creature that I wanted to add. So, I added it.

Yes, love the posts. Yesterday after reading your post I looked up the dover demon again. I like that one.

Who knows what strangeness these things are from or what they are. I am a believer in the human witness. Not in all the details mind you but in the meat of the story. These people witness, see, experience something and usually never waiver (looking at you lying lochness witness) from their original story. That in my mind gives it credence.

I dig it sir. Keep them coming. Reminds me of old paperback, magazine stories.

originally posted by: TrulyColorBlind
For those interested, previous stories in this series can be found here:

The cole story gave me the chills, the Tuttle story was more crypto, might be a dirt dweller animal? Good stuff.

I don't want to de-thread the thread

Cryptids
edit on 24-10-2021 by TheAlleghenyGentleman because: (no reason given)

posted on Oct, 24 2021 @ 06:21 PM
link
I would bet that since the 30's-40's there are many Islands of Dr Monroe out there with disgusting experiments!
Clearly to much like earth creatures to be alien.

posted on Oct, 25 2021 @ 12:17 AM
link
Sounds like a sick animal or perhaps something from a test lab as already mentioned or both.

posted on Oct, 25 2021 @ 02:00 PM
link
Maybe a human engineered hybrid. I read recently (I can't remember if it was on ATS) about human/ape experiments. BELIEVE, they are doing these sorts of experiments, if that was one, who knows.
This reminds me of a Big Foot type sighting where a child was taken and in the massive search an army detachment arrived, but they did there own thing. Would not help or co/ordinated with the police or professional searchers. Where they looking for something, to capture it and keep it secret?

posted on Oct, 29 2021 @ 01:54 PM
link
a reply to: TrulyColorBlind Any podcast that you listen too? there is one that did the Enfield one too. just asking I enjoy the stories behind them.

posted on Oct, 31 2021 @ 04:23 AM
link
i looked at the topgrpahy of the whol area, if i were to guess it was a rogue Bgigfoot lost, the topgrahy i see now on goolge maps shows all farm land but trees, imagine almost 50 years ago was all forrest.

Not to mention there is a national forrest park in range..

the surounding states are still as swampy and forrested as well..

if there is something to these big foots its cavern/ tunnnel systems that laymen, you and me dont know but goverment is somewhat aware of!
edit on 31-10-2021 by ContractedMercenary because: (no reason given)