posted on Oct, 23 2021 @ 10:22 AM
link
Forty-nine years ago in Tazewell County, 100 armed men walked the woods around East Peoria’s Cole Hollow Road in search of a monster.

The search was called off about 7:45 p.m. when one of the men accidentally shot himself in the foot. The creature was never found. 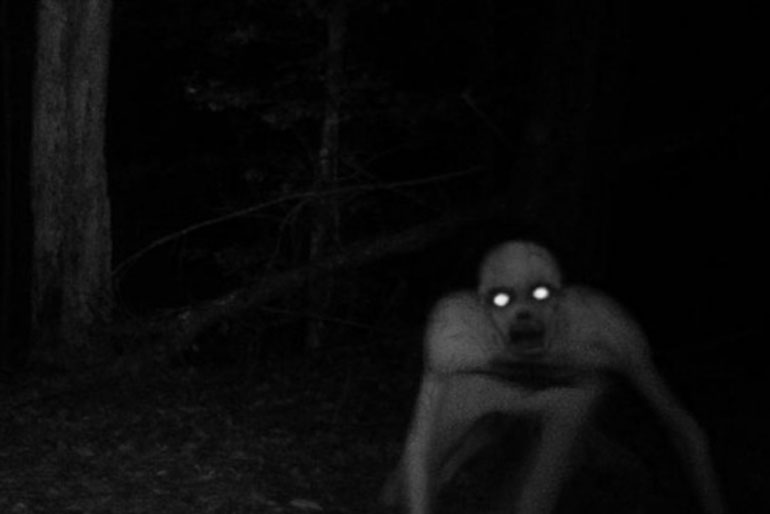 It’s hard to pin down exactly when and where all the excitement over the Cohomo monster started. Old articles found in the Daily Times archives blame a monster called Momo who was first spotted in rural northeastern Missouri a year before the Tazewell County sightings. James Donahue, Tazewell County Sheriff in 1972, still remembers the infectious hysteria of that summer.

In May 1972, there were reports coming in from all around the Pekin and Peoria, Illinois areas. In late May, a young man named Randy Emmert, and some friends, reported a large, hairy creature near Cole Hollow Road. This monster was 8-10 feet tall and was whitish in color. They stated that it made a loud, screeching sound and they suspected that it was living in a hole beneath an abandoned house. It also left very unusual tracks, having only three toes on each foot. Soon, others were reporting the same monster and it became known as “Cohomo,” short for the “Cole Hollow Road Monster.”

On May 25th, local police logged more than 200 calls about the monster. The calls ranged from seeing the monster walking through the woods, through yards, or along river banks, and even a report of the monster destroying a caller’s fence. The police were naturally skeptical of all the calls, but kept track of them nonetheless. By July 1972, there had been so many reported sightings that 100 volunteers were organized to search for the monster. After a search that lasted about two weeks, Tazewell County sheriff’s officers sent the volunteers home when one of them, Carl R. Harris, accidentally shot himself in the leg with a .22 caliber pistol.

The sightings continued and they couldn’t be written off to local “panic” either. On Tuesday, July 25th, 1972, Creve Coeur authorities reported that a witness saw something big swimming in the Illinois River. The following evening, the Tazewell County Sheriffs Department received a call from a Eureka man who knew nothing about the creature, but said he and his family were having a birthday party in Fondulac Park in East Peoria and sighted the creature. That same night, more than 200 phone calls about monster sightings jammed the switchboard at the East Peoria Police Department.

On July 28th, a rural Pekin woman reported that she saw Cohomo while picking berries by an old coal mine. The woman told the Sheriff’s office she was so scared she ran off, leaving her purse behind.

Later that same night, East Peoria Police got another detailed descriptions of the creature. It was reported that two people had jointly seen Cohomo. They described it as 10 feet tall. The creature’s face had long, gray U-shaped ears and a red mouth with sharp teeth. They also said the creature possessed thumbs with long second joints and looked like a cross between an ape and a cave man.

Newspaper articles of the time suggest that Cohomo had a horrible smell, sometimes compared to that of a wet dog, rotten eggs, or as sulphur-like. The Cohomo craze swept over Tazewell County.

Cohomo was seen again on July 27th, 1972, as East Peoria Police reported that he was spotted by “two reliable citizens” swimming in the Illinois River. They got close enough to him to know that he smelled awful and looked like a “cross between an ape and a caveman.”

After that, Cohomo was gone.

Although he has no idea what it may have been, Donahue says he thinks people had really seen something. 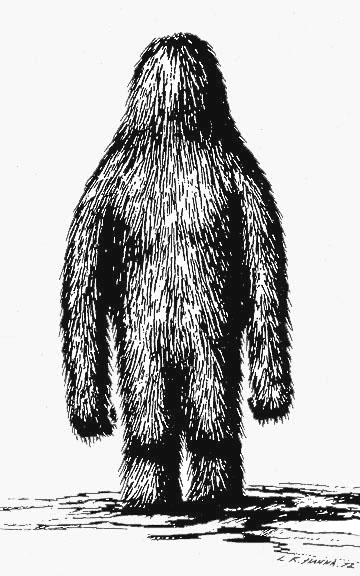 
From an article in the Pekin Daily Times, dated November 7th, 2006, and other sources.
edit on 23-10-2021 by TrulyColorBlind because: Corrected date.

posted on Oct, 23 2021 @ 12:08 PM
link
For anyone who denies the existence of Bigfoot, can you explain the thousands of reports throughout history that all describe, almost verbatim, the same creature?
From Trolls and Ogres to the modern day Sasquatch, if it’s not real then what exactly are thousands of eye witnesses experiencing? Not only a handful of eyewitnesses like Nessie from Lochness, thousands of sightings worldwide lay claim that these creatures exist.

Can you explain how this "thing" can avoid camera traps for 100 years ??
Camera traps were invented long before many realised and have a long and rich history. George Shiras III, an American congressman, is widely credited as being the first 'camera trapper', way back in the 1890s. It was quite a simple idea – a tripwire would trigger a camera and flash units.

It can sense them or possibly us on them, and how do you know they haven’t been caught on camera? Would you believe it if they were? Probably not, we need a body to end this.

It can sense them or possibly us on them, and how do you know they haven’t been caught on camera? Would you believe it if they were? Probably not, we need a body to end this.

We have thermal cameras, nigh vision, drones left and right in public and military, we have the skies plastered in satellites, 11,139 satellites and we have 7.10 Billion people in the world have a phone, that have a recording function, we have hunters and lumberjacks and forest caretakers running around, we have people sleeping the most strange places we have in the wild adventures.. we streamers and live cams.. I think we would have seen some GOOD footage of one by now.

UFO´s on the other hand.. I can understand why we would not have "good" picture and video of them yet. Because their tech is just a million years superior to ours and can cloak easy.

Thanks for the great post. This is the kind of post that I am so interested in. Personally, I have never seen anything like this but I truly believe that there is something to all of the thousands of sightings and reports over so many years. I agree that there are just too many aspects that these sightings have in common for them to purely be imagination or even wishful thinking. I don't believe that is is ever possible to PROVE that these 'monsters' don't exist, I will wait patiently and keep my eyes open until the day that it may be proven that they do exist.

Who is this “we”? Do you or I have this equipment?
Where is your clearance?

There are so many reasons people do not show their pictures, or video, because of the disbelief and ridicule associated with the subject.

So you’re just going to sit on the internet and arguing that a picture would have emerged, which numerous have, also thermals, but they’ll never be good enough. Nothing I write will convince you otherwise unless you go look for yourself.

It’s not like we don’t have clues, we have heads like the paracas skulls. Imagine the size of the body that went with some of those heads.

I don’t believe you have really looked into this or we wouldn’t be having this conversation.

Tazewell County sheriff’s officers sent the volunteers home when one of them, Carl R. Harris, accidentally shot himself in the leg with a .22 caliber pistol.

So Barney Fife did go into witness protection.

Yes, the satellites, drones, camera traps et al haven't caught any but there are hundreds of video and audio recordings as well, just look for them. I'll submit the missing 411 original documentary at the very end.

Which brings up the point - do you actually believe that anyone has satellites in orbit that can pick out fine enough detail to pick out a brown hairy being under the tree cover AND that anyone is scouring said satellite data for the creature? I'm sure the military and NSA will get right on that. I think not.
edit on 23-10-2021 by billxam because: added words

originally posted by: billxam
So Barney Fife did go into witness protection.

He only had that one bullet, so I guess it was enough to shoot himself in the leg!

You have two pictures which you state are artists representations. Both pictures are vastly different from one another.

Which picture is more true to the story?

The one that looks like monsters from the descent or the oversized captain caveman?

Joking aside, enserio, which of the two is the better representation?

posted on Oct, 23 2021 @ 07:02 PM
link
maybe they are smarter than us ? I know humans always think they are smarter than any other creature. They could be interdimensional beings , or can sense or cause interference with electronics and cameras. Just listen to a few of sasquatch chronicles podcasts and you will realize all these up close witnesses are not crazy or lying. If if one if true than sasquatch is real. a reply to: Spacespider

You have two pictures which you state are artists representations. Both pictures are vastly different from one another.

Which picture is more true to the story?

The one that looks like monsters from the descent or the oversized captain caveman?

Joking aside, enserio, which of the two is the better representation?

Personally, I think the top one was someone's lurid fantasy to draw people into their website. The lower one is what I think is more representative. I almost called him "Cousin It."

Yes!!! A tall cousin it. That’s what I should have gone with. Lol

People are seeing something. I have never seen anything unfortunately but I am always acutely aware when I hike.

I would say the strangest feeling place I used to hike was in Delaware county NY in the catskills. It was always too quite. Such a weird feeling every time I went for a hike. I lived there for seven months and I never felt comfortable hiking.
edit on 23-10-2021 by TheAlleghenyGentleman because: Hey whats that bigfoot smell???

There have been reports of US helicopters on border patrol catching very large thermal signatures on FLIR, much larger than a man, and moving through the bush at remarkable speed.

It's difficult for me to discount all of the reported sightings of cryptids over the years, but as you mention, it's paradoxical that people SEE these things, but no bones, remains, are ever found.

My opinion now is that these cryptids are biological entities, but not from "here", and they don't stick around "here" for the duration of their lives. Read the book on Skin Walker ranch done by George Knapp and others. The testimony of eye witnesses provides a hypothesis for the pardox of how creatures can be seen out in the wild, but very little traces of them are ever found, save footprints.

If you start to consider the possibility that elements of the UFO phenomenon and cryptid sightings might be different manifestations of a similar nature, you can remove a lot of the barriers that are brought up about the existence of "gigantopithecus" based on lack of physical evidence (i.e. a dead bigfoot).

The SCP foundation is just too good at what they do.