posted on Oct, 19 2021 @ 08:13 AM
link
One of the most recurring symbols in ancient civilizations is the 8-pointed star. It was known as the “Star of Inanna” (the Sumerian goddess), the Ghassulian Star, the Lakshmi Star, and can be seen in ancient art-work; including the Tablet of Shamash and Akkadian Cylinder Seals. Some researchers have connected the 8-pointed star to the Paleo-SETI theory, which refers to the hypothesis that extraterrestrial gods visited Earth and made contact with humans in prehistoric times.

According to author and investigative mythologist William Henry: “Wherever archaeologists discovered remains of the early Sumerian civilizations the symbol of the “Gate of the Gods” was prominently displayed. The Sumerians depicted this gateway as an 8-pointed star”. William Henry says that the Mayan civilization believed that entities (such as Quetzalcoatl) came to Earth through an 8-pointed star that opened in the sky, which Mayan scholar John Jenkins interprets as a worm-hole. The 8-pointed star was also known as the “Cross of Ilu” or “Bab-Ilu” which means “Gate of God”.

In his book ‘The Saturn Myth’, Talbott explains what the Cosmic Mountain was. He explains it as a gateway that god emerges from, saying: “These principles permit us to see that what conventional interpretations must regard as contradictory aspects of the [Cosmic] Mountain actually reveal a harmonious idea. The subject is the [Cosmic] Mountain at whose summit shines the stationary sun [Saturn]. The god “comes out” and “goes in” on the mountaintop through the gate”. 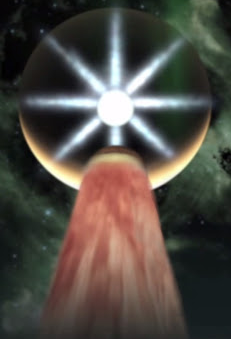 According to Zecharia Sitchin, the 8-pointed star can be assigned to Nibiru, which is a term in the Akkadian language, and according to William Henry in his article ‘Stargate of the Gods’, translates to “crossing” or “gate”. In Henry’s Kroll’s book ‘Cosmological Ice Ages’, he identifies Venus as Nibiru. We therefore might think of the Saturn-Venus-Mars alignment as a gateway of sorts.

This alignment that occurred thousands of years ago, according to Talbott, went through various configurations (see the documentary series ‘Discourses on an Alien Sky’) and at one point formed a triangle, as shown in the image below, which Talbott associates with the All-Seeing-Eye. As Talbott says in the ‘The Saturn Myth’ book: “Saturn wears the band as a golden girdle. He dwells in it as the pupil of the All-Seeing-Eye. It is impossible to pursue Saturn’s ancient image, without encountering the paradise of Eden, the lost Atlantis, the one-wheeled “chariot of the gods”, or the All-Seeing-Eye of heaven”.

Interestingly, there seems to be various movies that hint at this alignment that Talbott mentions. For example, in the movie Dark Crystal, there’s character called Aughra. She is both an oracle and astronomer and has an observatory made from complex machinery that follows and predicts the movements of heavenly bodies. She informs the protagonist of the film, Jen, that a “great conjunction will be coming” and she specifically mentions that this conjunction involves three suns or stars. When Jen questions her as to what the “great conjunction” is she cryptically puts a triangle over her eye as shown in the image below.

The celestial conjunction that Talbott describes involves three bodies (Saturn, Venus and Mars) known by the ancients as the “wandering stars” and at one point during their configuration they formed a triangle as seen in the image above. What are the chances that in the Dark Crystal, the character Aughra would also mention a celestial conjunction of three stars as she cryptically puts a triangle over her eye?

Another movie that might hint at the Saturn-Venus-Mars alignment is Stargate. The image in the middle below is the worm-hole from the Stargate movie. In this movie, the worm-hole leads to the deity Ra. According to Talbott, Ra is identified as Saturn; notice the worm-hole from Stargate is in the shape of a keyhole with the walkway representing the Cosmic Mountain. The image on the right below is a photo of the Vatican Courtyard and once again it’s composed of 8-spokes and is in the shape of a keyhole.

The Stargate image below reinforces the idea that the Saturn-Venus-Mars alignment is a gateway, which is supported by what Talbott says above. Stargate is not the only movie that could hint at the Saturn-Venus-Mars alignment gateway. Movies such as 2001: Space Odyssey and Interstellar proved commercially successful ventures in exploring the idea of gateways or worm-holes located around Saturn, that allows the protagonist to travel interstellar distances or between dimensions.

Interestingly, the Saturn-Venus-Mars alignment also corresponds to the Freemason Square and Compass design as shown below and is also shown in various logos. 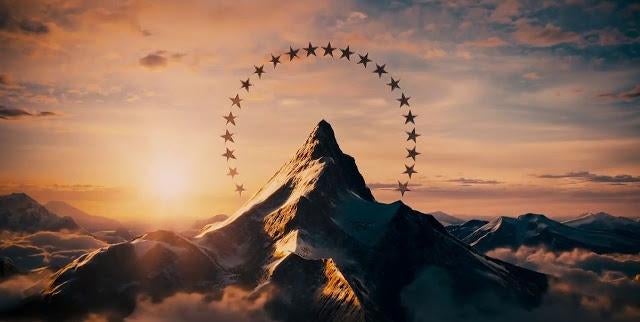 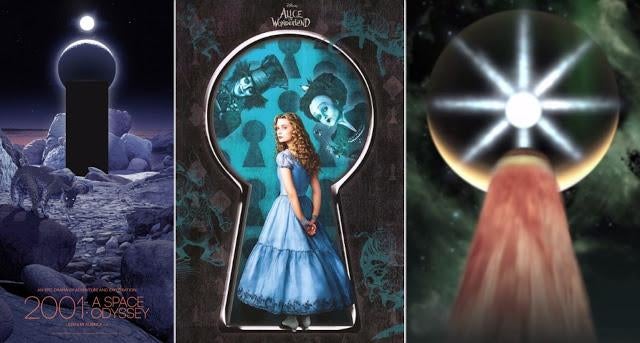 originally posted by: Nathan-D
Interestingly, the Saturn-Venus-Mars alignment also corresponds to the Freemason Square and Compass design as shown below and is also shown in various logos.

You think the image on the left looks like the center one? The former has a square, hence Square and Compasses, and the latter has a circle.

Masons are pretty good with geometry, if we want a symbol to look like a specific geometric shape we make it look like that.

Then there is the 'square the circle' thing.

originally posted by: butcherguy
Then there is the 'square the circle' thing.

We use a different symbol for the 47th Problem of Euclid.

edit on 19-10-2021 by AugustusMasonicus because: dey terk er election

Is that Cousin It in the picture?…


originally posted by: Nathan-D
Interestingly, the Saturn-Venus-Mars alignment also corresponds to the Freemason Square and Compass design as shown below and is also shown in various logos.

You think the image on the left looks like the center one? The former has a square, hence Square and Compasses, and the latter has a circle.

Masons are pretty good with geometry, if we want a symbol to look like a specific geometric shape we make it look like that.

What shape is drawn with a compass?
Square and compass is also represented with a circle inside a square. Also represented by the octagon which is used by the Knights templar. Just like the above image.
edit on 19-10-2021 by DeadSnow because: (no reason given)

originally posted by: DeadSnow
What shape is drawn with a compass?

Nothing, you need two compasses to draw a circle.

The divine spiritual stuck in the physical = Alchemy = Knights Templar.

All you need is a point within a circle. Square the circle

The Pythagorean Theorem does not make an octagonal shape.

The divine spiritual stuck in the physical = Alchemy = Knights Templar.

Masonry does not deal with alchemy.

Alchemy is the process of ascension. Alchemy is for the soul.

originally posted by: DeadSnow
Alchemy is the process of ascension.

"As a masonic "student of the law," the left "sole" is always squared off at the heel against the right in the traditional stance. This reflects the "archilles heel" which "squared the circle" of man as shown in Da Vinci's "Vitruvian Man". Our "Archilles heel" is esoterically the number 72. Even Mathematically, 72, is the first known "Archilles number" which is a powerful number but still imperfect. The Shemhamphorasch in the Cabala indicates the 72 names of God. We were the powerful beings that have had our soul/sole taken down at the heel." - Anonymous

"The Holy Kabalah, or tradition of the children of Seth, was carried from Cahldea by Abraham, taught to the Egyptian priesthood by Joseph, recovered and purified by Moses, concealed under symbols in the Bible, revealed by the Savior to Saint John, and contained, entire, under hieractic figures analogous to those of all antiquity, in the Apocalypse of that Apostle..
Masonry is a search after Light. That search leads us directly back, as you can see, to the Kabalah. In that ancient and little understood medley of absurdity and philosophy, the initiate will find the source of many doctrines." - Albert Pike

The true light of man = Saturn. Sons of light.

"Candidates for the occult path of fire are to this day admitted only when the sun is geocentrically in Scorpio and heliocentrically in Taurus. The star group constituting the constellation of the Scorpion closely resembles a spread eagle and is one of the reasons why that bird is sacred to Freemasonry, which is a fire cult," - Manly P. Hall, "Melchizedek and the mystery of fire"

Another passage from the same book:

"The true secret of the regeneration of the fire in the human soul is revealed by the ritual of the third degree of the blue lodge under the allegory of the murder of Hiram Abiff. The name Hiram is, as has already been noted, closely related to the element of fire. His direct descent from Tubal-Cain, the first great worker of metals by means of fire, still further connects this cunning worker of metals with the immortal life flame in man. In his secret societies of all ages, Charles W. Heekethorne gives and old Qabbalistic legend in connection with the relation of early Masonry to the worship of fire. According to this legend, Hiram Abiff was not a descendant of Adam or Jehovah, as were the sons of Seth, but was born of a nobler race, for his blood ran the fire of Samael, one of the Elohim, Further, there are two kinds of people in the world; those with aspiration and those without. Those without aspiration are sons of Seth, true children of the earth, who cling to their parent with tenacity, and the keyword of their nature is Earthiness.
There is another race who are sons of fire, for they are descendants of Samael, the regent of fire. These flame-born sons are ever fired with ambition and aspiration. They are the builders of cities, the raisers of monuments, the conquerors of worlds, the pioneers, the workers in metals, the true sons of the eternal flame. Fiery and tempestuous are their souls and earth to them is a burden. Jehovah does not answer their prayers, for they are the sons of another star.
Aspiration is the keynote of their nature, and again and again they rise, phoenix-like, from the ashes of failure. Never will they rest, like the element of which they are a part; they are wanderers upon the face of the earth, with their eyes upon the flaming star from which they came."


Masons always seem condescending and self important, is that true.


Masons always seem condescending and self important, is that true.

originally posted by: SeaWorthy
Masons always seem condescending and self important, is that true.

Mostly bored with people speaking from a place of ignorance on the matter.

Holds for you too, if you think I'm wrong join and find out yourself.

Did you ever try to overlay those images on to the flower of life? 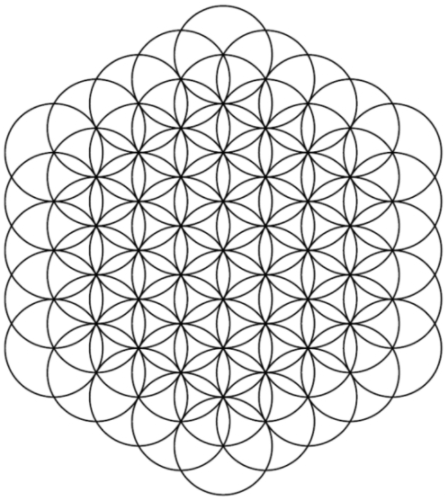 
originally posted by: SeaWorthy
Masons always seem condescending and self important, is that true.

Mostly bored with people speaking from a place of ignorance on the matter.

Holds for you too, if you think I'm wrong join and find out yourself.