Ukrainian sabotage group kidnapped an officer of an international organization

posted on Oct, 14 2021 @ 04:13 AM
link
On October 13, an officer of the Joint Center for Control and Coordination of Ceasefire and Stabilization of the Situation in South-East Ukraine (JCCC) Andriy Kosyak was abducted on the line of contact between the Armed Forces of Ukraine (AFU) and the people's militia of the Lugansk People's Republic in the village of Zolote.

The JCCC is a structure created for a complete ceasefire in Donbass and stabilization of the line of contact between the parties. It is designed to assist in the implementation of the Minsk Agreements: a plan for the peaceful settlement of the conflict, adopted on September 5, 2014 by a contact group that included representatives from Russia, Ukraine and the OSCE.

The area of ​​responsibility of the JCCC includes:

monitoring to stop the use of all types of weapons;
exchange of prisoners of war;
the withdrawal of heavy weapons from the contact line of the parties;
assistance to local governments, enterprises and organizations, as well as civilians;
ensuring security during work on the restoration of the infrastructure of the region.
According to the position of the Center, its work should be carried out until the implementation of the main provisions of the Minsk agreements or until the end of the OSCE mission in the conflict zone.

According to the Head of the Lugansk People's Republic Leonid Pasechnik, the observer of the LPR Representation in the JCCC, kidnapped by Ukrainian saboteurs, is being tortured and abused. Later, the Ukrainian side published a photo of the bullying of the LPR officer. 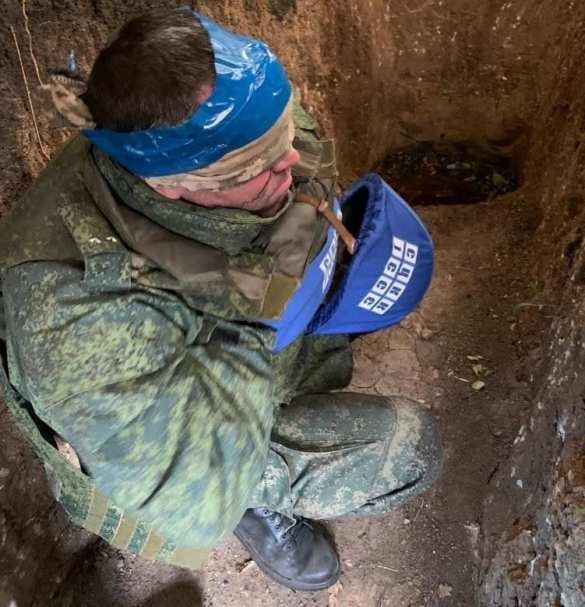 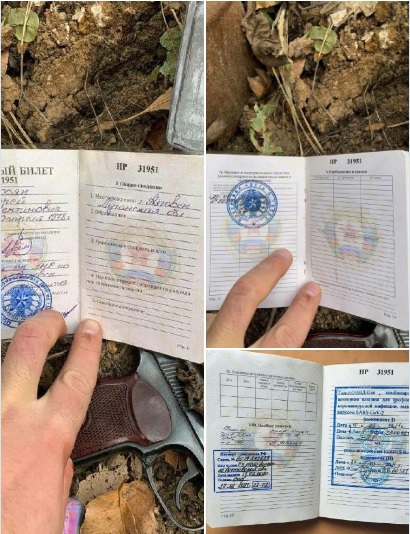 The photo shows that the kidnapped Andrei Kosyak is squatting in an earthen hole, blindfolded and his head rewound with tape. At the same time, blood flows down the man's face. In addition, the officer's military ID has been published, from which it is clear that he is a native and resident of the city of Alchevsk in the Luhansk region and is not an official representative of Russia in the JCCC and a Russian officer. However, Kosyak has a passport of a Russian citizen, like most of the inhabitants of the LPR and DPR.

The representative of the LPR in the Trilateral Contact Group at the negotiations on Donbass, Rodion Miroshnik, commenting on the situation, said:

"An employee of the JCCC of the LPR was captured when work was carried out, agreed with the command of the Armed Forces of Ukraine. Today's sortie of the VFU in Zolote emphasizes that Ukraine is a terrorist state that does not fulfill any of its obligations, including the observance of the immunity of employees of the Joint Center for Control and Coordination. acting in the state of the OSCE. "

I would especially like to note that in addition to the fact that the officer was a member of the international mission created by the heads of European states based on the results of the Minsk agreements, he has a Russian passport and is a citizen of Russia, being at the same time an officer of the People's Militia of the LPR. Russia received a direct mandate for an extremely harsh reaction against the "terrorist state" of Ukraine, which violates all international norms and agreements.

Russian political scientists agree that this is an extremely stupid response of the former president of Ukraine, comedian Zelensky, to Victoria Nuland's visit to Moscow, where she offered to give Ukraine to Russia in exchange for military bases in the former Soviet republics in Central Asia, which became relevant after the withdrawal of American troops from Afghanistan.

Although this provocation may also be a response to the unfortunate results of this visit. Let me remind you that Victoria Nuland could not visit Russia, as she is under reciprocal Russian sanctions. In order for Nuland to be able to visit Moscow, the American side lifted the earlier sanctions against a group of Russians.

In Russia, exacerbation of the situation in the east of Ukraine is expected. Earlier, Vladimir Putin has repeatedly stated. that the aggression of Ukraine will end with the complete loss of its statehood.

Taken by thugs or is there more to it? There usually is……..
Things are heating up Worldwide.
Scary times!

Taken by thugs or is there more to it? There usually is……..
Things are heating up Worldwide.
Scary times!

If for you this state terrorism is considered normal, then for the normal civilized world it is not normal.
Now imagine. that a certain state would kidnap an officer of an international organization, an American citizen, subject him to torture and post a photo on the Internet. How long will American missiles and F-35s fly to this state?

Poor sod don't look like he is being treated the best.

Not sure what he has done but i hope the situation is resolved peaceably.

Please don’t misunderstand!
I think what is happening there is horrid!
Maybe because things in the USA have been so screwed up for so long and getting worse by the minute I see the Bogeyman behind every bush….so to speak!
I look forward to your OP’s, I’ll work at better wording my replies.
My gut tells me I’ve unintentionally angered at least a few here at ATS.
I find you to have pretty thick skin if you know what I mean. I doubt you lay awake nights because someone hurt your feelings here…….👍😆
I’ve found that besides the obvious clicks here there are those who warn others to be tuff and strong and to not let negative things said bother or get one down and then it’s so obvious they go off and sulk when they get called out for this or that…LMAO! I’m not playing with you anymore 😂. (unowhour)
It’s been a learning curve here that’s for sure…..LOL.
Anyway, I’m from this place, born and raised right here in the USA and even I struggle with the the language and I’m certainly not “politically correct” that’s for sure!

I think the situation in Ukraine is quite under-reported here in the UK.
Obviously there are articles on the subject but you have to go looking for them and they all seem to give a simplistic and one-dimensional overview of things.

I honestly don't know what to make of the overall situation.
The Right to Self-Determination should be respected but so should national interest.

I guess it depends on which side of the fence you fond yourself on.

The guy in the photo does seem quite distressed and I'm absolutely certain if it was a Ukrainian national being held in such circumstances the Zelensky administration would be up in arms.

The blood running down the side of his face and fat lip never mind the fact that he is sitting in what looks like it may very well be his grave does not exactly inspire confidence.

Again I'm not sure what he has actually done but if pictures paint a thousand words i can only imagine what's going through that poor fellows nut.

How is Russia going to have the 'right' to 'end the statehood of Ukraine'? That is ridiculous.

How is Russia going to have the 'right' to 'end the statehood of Ukraine'? That is ridiculous.


And what did the United States do with Yugoslavia at the time? Don't you realize that you have set a precedent and opened the "Pandora's box"? Now anyone has the right to do this.

And you should not interfere in the dispute between Russians and Russians. The Ukrainians themselves say that if a brigade of Russian troops crosses the border of Russia and Ukraine, then 2-3 divisions will reach Kiev))))

I would say Russia started the precedent by 'annexing' all those countries to create the USSR in the first place no?

And sure if the people of Donbass, Donetsk etc legitimately voted to secede from Ukraine they should be allowed, but the whole thing also seems murky. Kind of like Crimea.

But the simple truth is Russia wants Ukraine for the resources/land.

Western Policy is a joke!
That's for damn sure.

I respect Putin for his anti global stance and against GMO's and the like, but I don't agree with the meddling in Ukraine. That said, both sides have been Ukraine as a proxy state for a long time...

posted on Oct, 14 2021 @ 12:19 PM
link
a reply to: chris_stibrany
What do you care about Ukraine, Russia and other lands. on which Russians live? Do not wake the sleeping bear, otherwise it will come to you))) And it will not just come. but will use your own arguments, and you can disappear. No need to risk it))))

I like the implicit threats. You usually post more intelligently.
You don't see me saying AMERICA IS GONNA KILL YOU! do you?

Be more balanced, if you can.

Agreed...none of our business. Especially after this stupid move.

Although im going off what you say here. So i only have 1 source if info that could have some bias.

The way things are going, It would be a relief for many in Ukraine to join the Russian Federation, they are probably scared that a lot of people in Ukraine are starting to think that compared with the present, The good old days were not that bad. Because in the end, everything is relative, and worth is based on comparisons.
Food a job a house free medical care, subsidized heating. If you wanted to and were motivated enough the University cost only your personal effort. Cars were hard to get, But at least the bike kept you fit.

Agreed...none of our business. Especially after this stupid move.

Although im going off what you say here. So i only have 1 source if info that could have some bias.


Why do you think. that there is little information? For example, OSCE Special Representative Mikko Kinnunen, the Russian Foreign Ministry represented by the official speaker Maria Zakharova and the Russian State Duma reacted.
And about the general situation in Ukraine, you can read in this article in the American press:

The way things are going, It would be a relief for many in Ukraine to join the Russian Federation, they are probably scared that a lot of people in Ukraine are starting to think that compared with the present, The good old days were not that bad. Because in the end, everything is relative, and worth is based on comparisons.
Food a job a house free medical care, subsidized heating. If you wanted to and were motivated enough the University cost only your personal effort. Cars were hard to get, But at least the bike kept you fit.


My friend, I have relatives and friends both in Ukraine and in Belarus. Very close relatives. Now my Ukrainian brothers either refuse to communicate with me on the phone, or are very much afraid to do so, fearing reprisals. You cannot even imagine in what poverty Russians live in Ukraine, how they are forced to survive. Ukraine in poverty has now caught up with the most backward countries in Africa. And once, immediately after the collapse of the USSR, this country was very rich, had a highly developed industry and agriculture. And now even their "national wealth" - fat, they are forced to buy in Russia and Belarus.
In fact, in Russia they believe that from part of the Russian lands the West has now created a new Khazaria, where there is one people in the country, and another people in power.