The answer is very simple that it was a service flight of balloons and radar reflectors. Part of Mogul, but not a full Mogul array with equipment. Mac Brazel described exactly what was found in the newspaper article IN 1947. There's the witness. He did it at the time without the silly UFO bias put out later by UFOlogist Stanton Freidman in 1978 and subsequent garbage.

4) UFO's have been monitoring atomic weapons testing which the area has been known for, given that white sands is not that far from Roswell and Corona.


I find the entire draft document below compelling since it is purported to be drafted by Oppenheimer in concurrence with Einstein, but unsigned, on the subject of EBE’s.

I have yet to see this draft document given the scrutiny to deem it legitimate or hoaxed. Of course any previous scrutiny would be appreciated. If legitimate, then the thought occurs……if you can’t trust these two world renowned physicists to tell the truth, then who can you trust?

My assertion that EBE’s have been monitoring nuclear tests and development is stated in this draft document, and reads as the following…..(also highlighted within the draft document)

……” Lastly, we should consider the possibility that our atmospheric tests of late could have influenced the arrival of celestial scrutiny. They could have been, curious or even alarmed by such activity (and rightly so, for the Russians would make every effort to observe and record such tests).”……

As for the initials I thought perhaps Von Braun….but after searching for any documents with his initials only….no luck. As I looked at his full signature, the penmanship style does not look the same. I don’t know who the initials belong to.

Once again, if this draft document is legitimate, I have to believe Oppenheimer and Einstein knew extraterrestrials existed. If it’s a bogus document of disinformation…well throw it on the heap of other hoaxed documents.

originally posted by: Ectoplasm8
a reply to: Ophiuchus1

The answer is very simple that it was a service flight of balloons and radar reflectors. Part of Mogul, but not a full Mogul array with equipment. Mac Brazel described exactly what was found in the newspaper article IN 1947. There's the witness. He did it at the time without the silly UFO bias put out later by UFOlogist Stanton Freidman in 1978 and subsequent garbage.

Below are 2 pages of a log for NYU launching primarily from Alamogordo NM. Which Flight Number do you believe to be the one that crashed and associated with the debris Marcel presented for the newspaper? You might have to zoom in or go to page 703 and 704 of The Roswell Report pdf linked……

In reference to my previous post above…..the Critique column (last column to the right) of the NYU flight log is where the highlights of a flight are notated.

I’m not seeing any mishap in the Critique for any flight from June and July that mentions a failure that would have denoted a balloon crash.

Once again, I’ll ask…..can you point out what flight number (first column) in the log do you think, from your own research Truth, is associated with the eventual Roswell “debris”?

In between service, research, and general test flights weren't noted as I said in my thread. Charles Moore was still in the process of testing balloons and their materials and radar reflectors to track flights using the existing V2 radar. If you read about the debris that Brazel found on the ranch in 1947 from his newspaper article, it matches balloon and radar reflector materials exactly. He didn't mention any equipment that a full Mogul flight would have had. He mentions simple debris that would have been part of a service flight.

Fully equipped Mogul flight #5 came down on June 5th 25 miles outside of Roswell showing you the direction general balloon flights were taking at that time.

You also have to understand that Mogul arrived in Alamogordo still in the developmental stage. Different materials were still being tested. In fact, the entire program was canceled because of cost etc. and never implemented.

Charles Moore said in his afidavit:


I can think of no other explanation for Roswell than one of our early June service flight balloons.

Thanks….. I guess I’m still on the fence.

Brazel stated …."I am sure that what I found was not any weather observation balloon”

So presumably he came across a Service balloon crashed from early June, (according to Charles Moore), (Brazel discovers it June 17th) that was configured with instruments he’s never seen before….it did not resemble previous “weather observation” balloon systems found on the ranch. This is understandable.

The likely balloon Brazel came across was Flight 4 in June 4 1947…Landing Unkown!…..IMO

….” According to information released by the department, over authority of Maj. J. A. Marcel, intelligence officer, the disk was recovered on a ranch in the Roswell vicinity, after an unidentified rancher had notified Sheriff Geo. Wilcox, here, that he had found the instrument on his premises.

Major Marcel and a detail from his department went to the ranch and recovered the disk, it was stated.

After the intelligence officer here had inspected the instrument it was flown to higher headquarters.

The intelligence office stated that no details of the saucer's construction or its appearance had been revealed.….”

The Ultimate Coincidence of two separate, yet mixed events, to create a conspiracy …..Hmmmmm

I laid out the differences between what Brazel found previously and what he found in June. This wasn't a standard weather balloon. That's why Moore was experimenting with different materials because it needed to be stronger, reach greater heights, and stay aloft for longer periods. It was found broken apart in many pieces, possibly after storms you mentioned. Most weather balloons were found in one piece only having one balloon and a radar target attached if needed. Brazel didn't think twice about it when he initially saw it and stashed it under brush and went back to work. Only after having friends over suggesting it could be one of those UFOs popularized by Kenneth Arnold a week earlier and with a reward, did he go back 11 days later and got the debris.

This is exactly what was said in 1947 before Freidman got ahold of the UFO tale in 1978 and ran with it. This should be the focus of the description. You would have to believe an ET spacecraft would be constructed of the exact materials as human made balloon flights that were being flown out of Alamogordo 80 miles away, and done in the exact same time period of launches in June 1947. It's either an incredible coincidence, or a story that steamrolled AFTER a UFOlogist heard of it and turned it into something it wasn't for benefit.


I find the entire draft document below compelling since it is purported to be drafted by Oppenheimer in concurrence with Einstein, but unsigned, on the subject of EBE’s. ....

It's one of MJ-12 document for starters generally considered FAKE by all but Stan Friedman (even he only thought one or two were genuine) and Bob and Ryan Wood (who were either purposely spreading disinfo or incredibly gullible, credulous individuals.).

There's a spelling mistake in the title, "Celestrial" not Celestial. 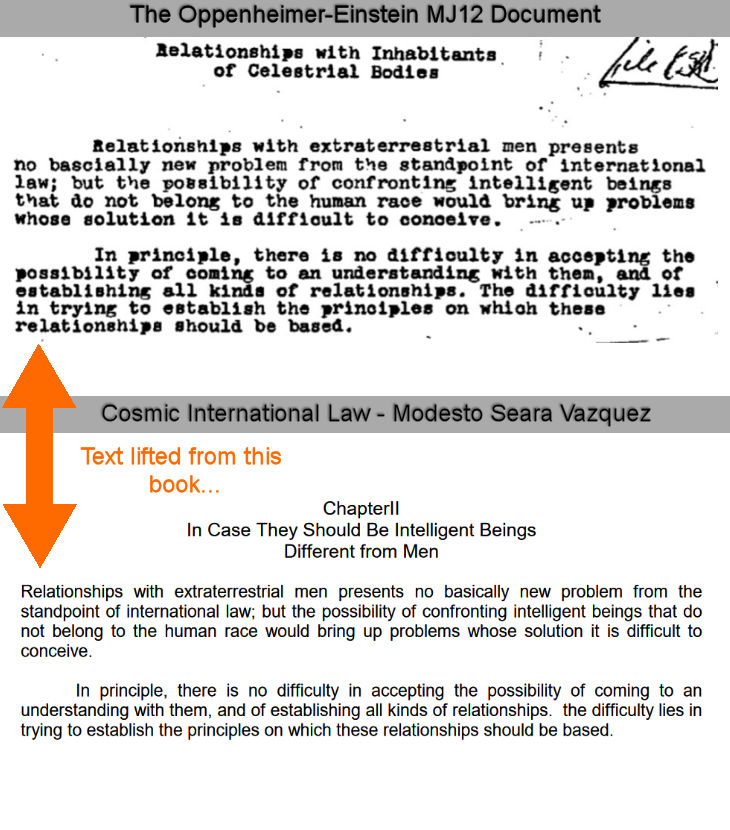 Unfortunately the hoaxers know that it takes far more time and effort to prove their hoax than it does for them to create it. Given the need to believe, gullibility and credulous nature of some people who will still prefer to perform mental gymnastics to explain it as still being aliens. Then these hoaxes just get recycled every generation.

My interest in Roswell lies with why so many new and mainly false stories seemed to suddenly spawn after it re-emerged in the late 70s.

1) No one had ever reported alien bodies at Roswell or threats on civilians to keep quiet until the 1980s.
2) Even Marcel, the base intelligence officer, only reported seeing the debris. Debris that many people handled but no one managed to conceal from the military.
3) Bill Moore and Friedman's research led to alien craft crashing in the desert in not one, but two locations
4) Not long after Doty appeared on the scene spreading disinfo to Bennewitz and Linda Howe.
5) In 1987 the hoax MJ12 documents were released into the wild
6) In the 1990s further MJ12 [hoax] documents were released
7) Later in the 1990s the man who declared those documents a hoax and had also been Richard Doty's boss at AFOSI wrote up the government's official Roswell Report ; Fact or Fiction in the New Mexico Desert.

………” Of course any previous scrutiny would be appreciated.”……..

……..” Once again, if this draft document is legitimate, I have to believe Oppenheimer and Einstein knew extraterrestrials existed. If it’s a bogus document of disinformation…well throw it on the heap of other hoaxed documents. ”……

Thanx MM and Ecto! for the retuned rebuttals.

Now….where’s that heap of hoaxed documents 🤔

A Mockumentary movie based on the midair collision of a flying saucer and a balloon test system, caused by a lightning storm around Roswell would ….SUCK…..in hindsight. Although I’ve seen worse on the SyFi Channel……. 😆

Perhaps it’s still doable with no name actors 🤔 (Someone or something lacking a recognizable name, identity, or reputation. If you hire some no-name for the job, be sure to check references. Not famous, distinguished, or recognized. A no-name actor, product, etc.)

If it's of interest, I wrote a thread regarding the MJ12 documents, with external sources included. It's far from comprehensive but outlines how much of the American UFO lore, has been influenced by the stories presented in these hoaxed documents.

The MJ-12 Documents – Who, Why? How? Did they Affect Ufology?

thanks to the many who contribute information I appreciate the work of all , who ultimately desire the truth about Roswell and other crash sites in that region and time period. The matter of the Oppenheimer/ Einstein document is most interesting. If there was any unidentified object of inquiry, both scientists would have undoubtedly been called in for opinion. M deems it a hoax but the document should be further investigated. As for MJ, Doty, et al, we seem hopeless and stuck in belief systems of one side or another. I know the research continues as the original members have died off but there seems to be some good correlation about travel dates and times of some of the members converging throughout the 50’s in records in the National Archives and “other files.”

Again, people connect the dots as they see fit or no dots existing. The same for the Wilson document - which I personally know is legit. We can’t all be the same but, may I offer, if the.Roswell debunkers are wrong, and even if we’ll intentioned, they have done a significant abundance of damage to the of who we are as a people abiding by the Constitution and as a society of truth seekers. I think posters like Mirageman and Ectop are smart and understand this. I value the opinions and ideas of all. Mirageman has done more work on what I believe he sees as rational explanations for the UFO phenomena and with great conviction. I would , however, be careful to becoming an absolutist on the Oppenheimer and Einstein Document unless there is more corroborated evidence that it is a hoax. I am not sold that it is.