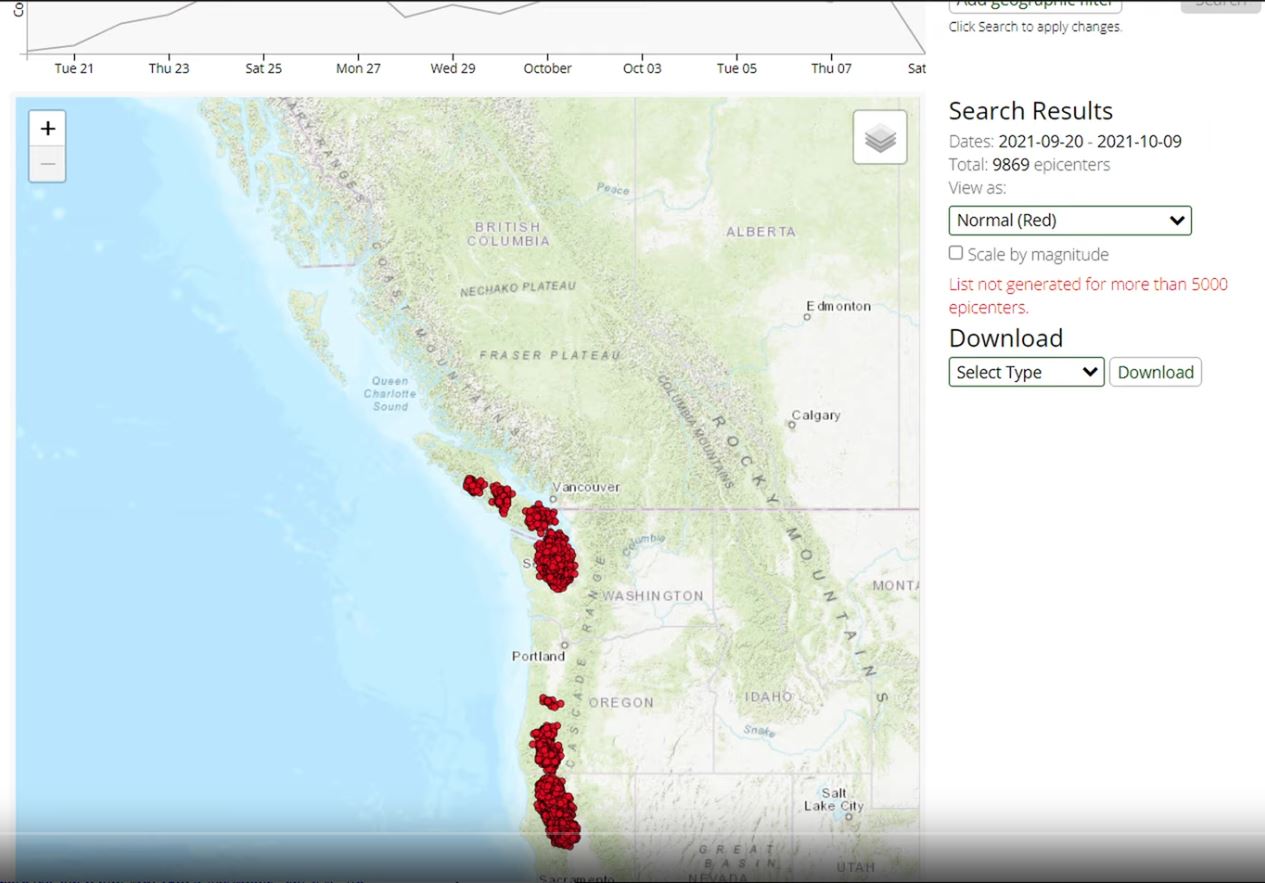 Youtuber EarthMaster has reported an unusual uptick in the frequency of these tremors. 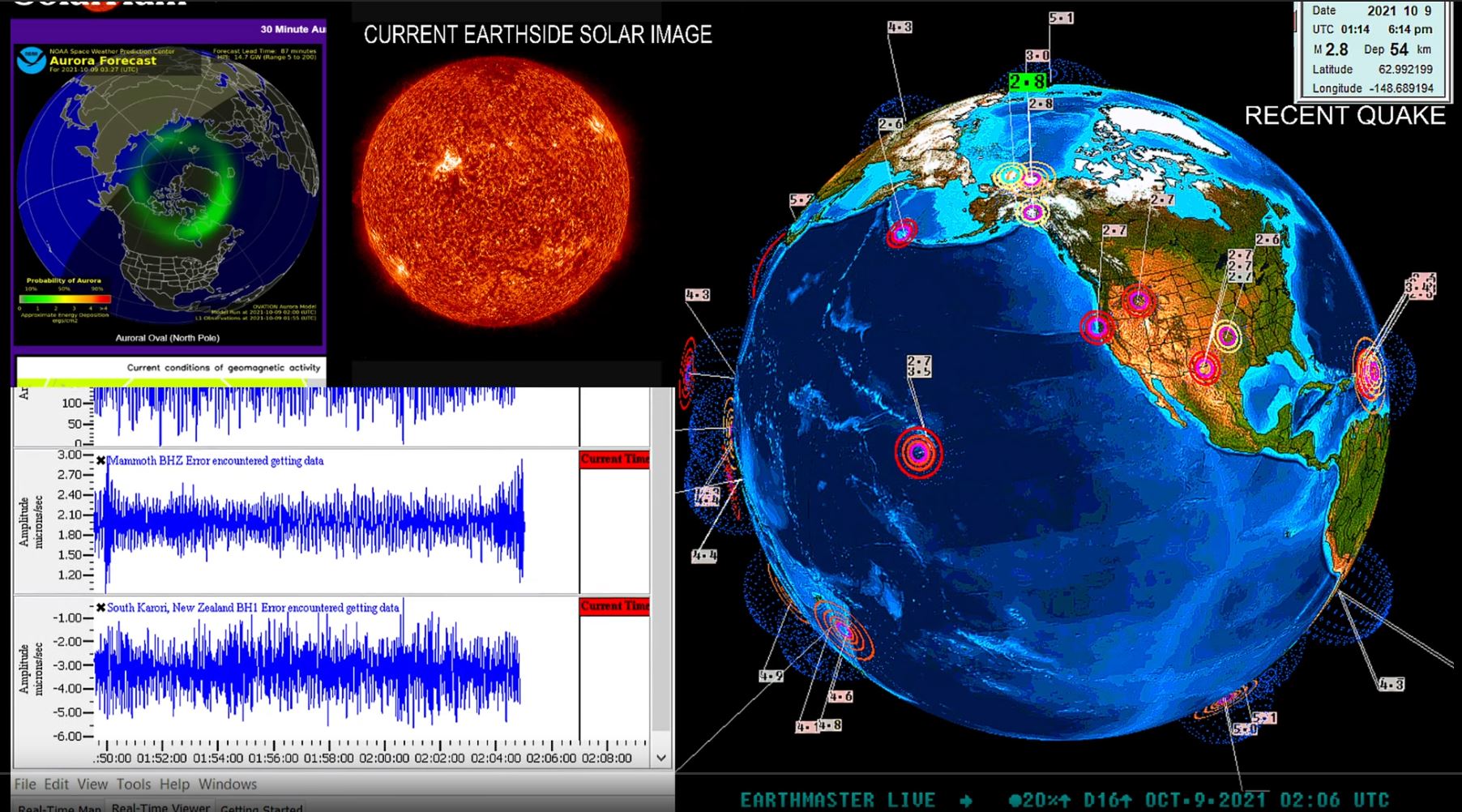 Yet in in comment section, no one in Salem Oregon, or Bellingham WA have felt nothing. One commenter said that the Canadian “seismic stations have had their sensitivity dialed way back. All flatline…” Another stated,” Why USGS sensors in Yellowstone not reporting activity?”
Strange time we live in.

It could just be the tremors caused by tens of thousands of moving vans leaving the area at the same time.

Look at the places involved, after all...

Haha, yeah that must be it.

originally posted by: all2human
These are good actually
lessens the chance of the big one

They could be per-cursors of a big one.

This zone of the Ring Of Fire is long overdue for a release of energy based on past events but I don't know if mother nature takes much notice of our records.

These days one has to ask is this natural or is something else happening? I don't have the answer to that.

posted on Oct, 9 2021 @ 02:01 AM
link
There are dozens 'active' but dormant volcanoes on the west coast of North America with the most famous one being Mount St Helens. They will have major eruptions again. Tremors like this are often a precursor to volcanic activity.

About 2 to 3 major eruptions happen per century from Canada to California. It has been over 40 years since Mount St Helens's major eruption...

If the tremors start concentrating around one of these volcanoes we will know something is up.

I live in Northern California, Redding area, MT Shasta is about 50 mi. north and MT Lassen is about 40 mi east. I haven't felt any tremors, but I am holding my breath.

They will, but after Mt. St. Helen's '80s blowout, it will take considerable time for it to reach that level again. If there is going to be a major eruption in the zone, it would be from one of the other volcanoes that hasn't erupted recently. St. Helens might come to life, but it wouldn't be as catastrophic as what happened not so long ago, geologically speaking.

For St Helens maybe though it had a minor eruptions from 2004 to 2008 and land deformation is still being observed.

Historically 2 to 3 eruptions major eruptions happen in the Cascades. One could argue we are due for another one, and it's almost a sure thing it will happen in our lifetime.

In California the Clear Lake Volcano field, The Lassen Volcanic Center, Medicine Lake Volcano, and Mount Shasta are at hight to very high risk of a major eruption(as well as Salton Buttes but it's far south of these tremors and not part of the Cascades). Oregon has Crater Lake, Newberry, Three Sisters, Mount Jefferson, and Mount Hood; Washington has Mount St Helens, Mount Adams, Mount Rainier, Glacier Peak and Mount Baker. Canada has several more along this hot zone.

It is also.possible a volcano thought to be extinct could come back to life in this area as a lot is still a not known about Volcanic activity, especially when and where one may occur(until it starts to rumble and the ground starts to reform, indicating an imminent eruption).

Recently Mount Shasta has had a few tremors(but very deep).

I'm not disagreeing with you at all. There are volcanoes in the zone due for major pop offs. I'm just saying that the type of eruption that St. Helens produced in the '80s takes a long, long time to recharge for, and it's unlikely that it managed to recharge that much in only 40 years (eye blink in geologic time) although it could definitely produce lesser eruptions.

posted on Oct, 9 2021 @ 11:59 AM
link
I don't understand how certain authorities and media people love to hype fear with stuff like covid and global warming

but this they ignore.

hoping its just venting some steam


originally posted by: all2human
These are good actually
lessens the chance of the big one

They could be per-cursors of a big one.

This zone of the Ring Of Fire is long overdue for a release of energy based on past events but I don't know if mother nature takes much notice of our records.

These days one has to ask is this natural or is something else happening? I don't have the answer to that.

Been reading the quake stuff for years, and you are right, it could be either way. Even the professionals doing these observations at the tracking places have a hard time determining which way it is going to go most times. I guess they are testing some new equipment and programs to figure this out, but it will be years before they will be able to evaluate this stuff enough to give accurate warnings to the areas.

posted on Oct, 9 2021 @ 01:03 PM
link
The slip-tremor events happen, almost like clockwork, about every 14 months or so, have been going on for quite sometime, it's covered in the show, "Monster Quake: Are We Next". When Cascadia does go it will likely be during one of these events. There used to be a person at this site who tracked these quite regularly.