Magnetisation of Graphene Oxide and applications for mind control - SPIONS, PEG and Magneto in vaxs

Yeah, not even close to what is going on in the magnetic videos.
Someone picked mouth running over evidence waching.

Try watching all these and come back here with a straight face and claim it's the "sticky spoon" effect.

That's exactly why they pushed the debt limit raise back til they go on winter break..

Anyone else remember the peer pressure campaigns. We all grew up with it just about.. now is not the time to give into peer pressure. Be unique, stay creative..

The CDC all but issued a public alert telling people to stockpile. "To ease supply chains". Trust your instinct..
edit on 7-10-2021 by BlackArrow because: (no reason given)

Combine all of that with a lipid transport system, and whammo.

Thanks for the wealth of info on this subject. Much appreciated.

That guy had some bizarre and highly interesting posts. I believe it is part of Geo-engineered Transhumanism.

posted on Oct, 7 2021 @ 11:23 PM
link
Very interesting and well researched post.
I began looking up each ingredient in the vaxx that I could find that been published. I was lead to Nanotechnology (I will try again to find that specific link), so I looked up what exactly is “Nanotechnology” (yes, small tech) in the simplest explanation. Remember, if you can’t explain it to a 5-year-old, you yourself, don’t understand it!

Basically, exposure to manufactured nanomaterials can lead to adverse effects to the heart, lungs, skin; alter reproductive performance; or contribute to cancer. Competitions “RoboCups” are sponsored by governments to find new advancements and brainiacs who can control “nanobots”, which move in response to altering magnetic fields or electrical signals transmitted.

So I’m connecting nanobot tech in the vaxx to control population by 5G.

If one scrolls down to “Health” they can read some great advancements for mankind but just as quickly, it turns to the dangers of nanotechnology in medicine. I could not bold to emphasize so I used asterisks.

Nanomedicine
Nanotechnology can help medical tools and procedures be more personalized, portable, cheaper, safer, and easier to administer. Silver nanoparticles incorporated into bandages, for example, smother and kill harmful microbes. This can be especially useful in healing burns.

Nanotech is also furthering advances in disease treatments. Researchers are developing ways to use nanoparticles to deliver medications directly to specific cells.

Dendrimers, nanomaterials with multiple branches, may improve the speed and efficiency of drug delivery. Researchers have experimented with dendrimers that deliver drugs...

**Fullerenes**can be manipulated to have anti-inflammatory properties to slow or even stop allergic reactions. Nanomaterials may reduce bleeding and speed coagulation. Diagnostic testing and imaging can be improved by arranging nanoparticles to detect and attach themselves to specific proteins or diseased cells.

**Fullerenes are atom-thick sheets of another carbon allotrope, graphene, rolled into spheres or tubes. **


Grey Goo and Other Concerns
Unregulated pursuit of nanotechnology is controversial. In 1986, Eric Drexler wrote a book called Engines of Creation, which painted a vision of the future of nanotech, but also warned of the dangers. The book’s apocalyptic vision included self-replicating nanometer-scale robots that malfunctioned, duplicating themselves a trillion times over. These nano-bots rapidly consumed the entire world as they pulled carbon from the environment to replicate themselves.

Drexler’s vision is nicknamed the "grey goo" scenario. Many experts think concerns like "grey goo" are probably premature. Even so, many scientists and engineers continue to voice their concerns about nanotech’s future.

Nanopollution is the nickname given to the waste created by the manufacturing of nanomaterials. Some forms of nanopollution are toxic, and environmentalists are concerned about the bioaccumulation, or build-up, of these toxic nanomaterials in microbes, plants, and animals.

*****“Research is needed,” writes the U.S. Environmental Protection Agency, “to determine whether exposure to manufactured nanomaterials can lead to adverse effects to the heart, lungs, skin; alter reproductive performance; or contribute to cancer.

Nanotech is an expensive area of research, and largely confined to developed nations with strong infrastructure.

The article on desktop discusses NanoSoccer:

Nanosoccer – a Match under the Microscope

Hosted by the National Institute of Standards and Technology (NIST), the second Nanosoccer tournament is currently underway at the Carnegie Science Center in Pittsburgh. “RoboCup Open”, in which miniature computer-driven robots, six times smaller than an amoeba, play soccer on a field the size of a grain of rice.

The robotic soccer players, or “nanobots”, which are commonly manufactured from such materials as aluminum, nickel, gold, silicon, and chromium, are operated by remote control under an optical microscope. ******They move in response to altering magnetic fields or electrical signals transmitted ******through the soccer field itself.

The nanobots, which represent teams from Carnegie Mellon University, the U.S. Naval Academy, and the University of Waterloo, are tested on a variety of skills, including the capability to demonstrate agility, maneuverability, response to computer control, and the ability to move objects.

On the webpage, (why is everything so difficult to upload on this site!?!) photograph of a typical nanosoccer robot compared in size to red blood cells.
About 200 of these robots could stretch in
a line across the top of a plain M&M candy.

“Nanoworms”, miniature devices that can be navigated through blood vessels without triggering a significant immune response, which were recently developed at the University of California, San Diego, and “microbots” developed at the Chonnam National University in Korea, which may be used to release drugs when hitting a blood clot.

I don't think that there are many people disputing the possibility for the presence of particles with magnetic properties in the vaccines. They could certainly be there, I am personally not disputing that.

What people find ludicrous is the idea that magnets will stick to the injection sites because of these magnetic particles.

Whilst there may be magnetic particles in any of the vaccines, they will be so small and few in quantity as to have little to no effect from magnets.

For example, the vaccine dose for Pfizer is 0,3ml. Even if that was solid iron, which it obviously can't be, it would only weigh 2,36g.

I agree with you about the small volume of vaccine but is it possible that with nano tech a self replicating scaffold can be injected and build a magnetic network from the injection site by harvesting ingredients readily available in the body?

Vaguely remember reading about this speculated as nano tech that could repair itself while travelling vast distance and time in the universe beyond the lifespan of a human. Too much science fiction perhaps.

Thanks very much for this. I’m the only one awake that I know in my real world. This will come in handy.

originally posted by: Mandroid7
a reply to: vonclod

Yeah, not even close to what is going on in the magnetic videos.
Someone picked mouth running over evidence waching.

Try watching all these and come back here with a straight face and claim it's the "sticky spoon" effect.

Show me a single video where someone has applied powder to their "area" before applying the magnet please.
Your links (accessed from a non-infected burner) show absolutely nothing. Just people sticking shiny magnets to their sweaty skin.


That's not a vial of Moderna, whatever that is is clearly labelled "particle works", a company that does not make the Moderna vaccine (or any other vaccine).
The label also says "Co-F", apparently with something after the "F".
Below that it says "core-" 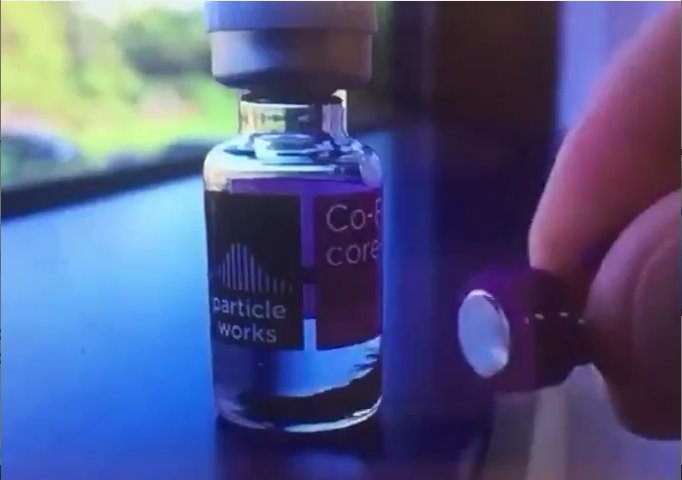 A quick search showed me this page from Particle Works, showing a vial of Iron Oxide Coated Cobalt Particles, so that's probably what's on that vial, not a vaccine. The magnet even looks similar to the one used on the video.

This guy removed magnetic object from underneath his arm at the injection site with a surgical instrument - www.bitchute.com...


Could be the tip of the syringe's needle or some other thing.

One thing I can guarantee you: the Pfizer vaccine I took (only the first dose) was not magnetic, neither was the Moderna vaccine my sister got, I tested it.

Edited to add that you should have added a warning about the video of the guy having that small object removed from his arm, some people cannot watch that kind of thing. Also, it looks like the object is being removed by someone using the tip of X-Acto blade, not a surgical instrument.
edit on 9/10/2021 by ArMaP because: (no reason given)

posted on Oct, 11 2021 @ 07:06 PM
link
They'll have their slaves burn and bury the dead. Not all of us will die at once or at the same time. Leave the slaves to clean up the mess as usual. I'VE BEEN SAYING THIS SINCE AROUND THE START OF COnVID!!!

Society is already on the verge of collapse, in my view the elites will go underground in hiding.HOPE YOU ALL HAVE SURVIVAL PLANS!!!