For example, when five gangsters were arrested for holding a public gunfight in Chicago’s Austin neighborhood last week, shooting more than 70 rounds at each other in all, she decided to let them go without charges.


The state’s attorney’s office, however, declined to charge any of them, calling the evidence insufficient. A police report further noted that prosecutors told investigators charges were rejected because the shootout involved “mutual combatants.”

So wrap your heads around this.

Five ganster's shooting it out, are just mutual combatants and no charges will be filed for reckless endangerment of whoever might have been at the wrong place at the wrong time.

As for gun safety.

Don't think all parties involved could be any more STOOPID.

Next time you want to attempt murder on someone. It seems Chicago is the place to be.

posted on Oct, 7 2021 @ 11:54 AM
link
Current leaders are like old useless excrement in todays effed up situation.


We need an Inquisitor with all the powers enabled to go and clean house from all these States.

Painful, but worth it.

I'd say that I can't wait to bail on this #show, but I won't because it's my dogs dying that I'm waiting for.

posted on Oct, 7 2021 @ 12:16 PM
link
Maybe Kim Foxx asked Michelle to get the charges dropped like she did with Jussie Smollet. Let's see if Barry will comment: 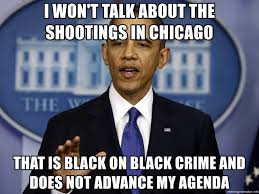 This happened near where I live. One of the suspects crashed his getaway car in our community. The residents were outraged, but at the same time, these liberals around here voted for this kind of stuff.

The crazy thing is that they have the shootout on video. The police rolled up and captured it on their dash cams. I was trying to find the video to embed but can't seem to locate it on Youtube anymore. It was posted on our local private community Facebook group.

Basically, one gang was shooting at another gang in the house. Two cars pulled up on the street and the shooters hopped out blasting at the house. I guess they didn't expect the return fire. One of the shooters got dropped/killed in the street. The two cars drove off.

One of the suspect cars got away and was later found burned out. The other car apparently dropped a wounded participant off at the nearest hospital and tried to get away but eventually crashed and was apprehended.

My issue is that they know the guys were there and they broke a myriad of other laws. Even if you can't pin the trigger man on the dead body, you should be able to charge them with something. Unlawful discharge, illegal possession of firearms, attempted murder, etc. They broke a ton of laws just being present.

So Kim Foxx can't prosecute these guys.... but they arrested a hard working Door Dash driver the week earlier who let off two shots in the air after he was car jacked for the second time.

posted on Oct, 7 2021 @ 12:29 PM
link
Another great part is Mayor Lightfoot actually came out in a rage against Foxx.

Here's some of the fake outrage and horrible phony acting by both meatheads. . . .

posted on Oct, 7 2021 @ 12:31 PM
link
So if six or eight people in that neighborhood decide to eliminate the gangs, would it also be called "mutual combat"?

originally posted by: ColeYounger
Maybe Kim Foxx asked Michelle to get the charges dropped like she did with Jussie Smollet. Let's see if Barry will comment:

Due to her Obama connection, Judges and the DOJ are afraid of Kim Foxx.


Many Black Lives would be saved if Fox were to mysteriously vanish.

originally posted by: JIMC5499
So if six or eight people in that neighborhood decide to eliminate the gangs, would it also be called "mutual combat"?


It sure does seem that way. If this is the way they want the law to work, then vigilante justice would just be another form of mutual combat.

So gun laws are super lax in Chicago?

originally posted by: JinMI
a reply to: neo96

So gun laws are super lax in Chicago?


I think only if you are a certain color skin.

If you were say a different color, and were attempting to protect your home from a violent mob, prolly not so much then.

A judge in Loudon assigned a special prosecutor to handle a recall suit that the local prosecutor refused to bring to court. I don't know if there is any method to do some in criminal cases.....

These clowns are all over. Where I work (about 30 miles from where I live) we had a clown blindside an 80 year old man, because he was wearing a red baseball cap. The jerk thought it was a MAGA had and he was showing his buddied how tough he was. He broke the man's Femur, crippling him so bad that he had to move in with his Grandson's family. Police caught the clown, but the local DA declined to prosecute. The DA was later heard making comments about the man should have known better than to wear the hat. It was a US Marine Corps. Association hat. Then last fall this same DA went on the news and stated that if anybody vandalized a Biden campaign sign, he would charge them with anything that he could think up.

The DA got blown out in the Primary election this past Spring. A local motorcycle social group expressed their displeasure to the clown that injured the man and then raised $15,000 and built an addition on to the Grandson's home for his Grandfather.


And they said it couldn't be done

posted on Oct, 7 2021 @ 04:31 PM
link
Maybe they thought they were "standing their ground" I think gun crime laws should be upped to life in prison. I think all guns should be registered and if caught with an unregistered gun, long prison term. Registering guns in my opinion is no more an infringement than requiring ID to vote.

originally posted by: FunshineCD
Maybe they thought they were "standing their ground" I think gun crime laws should be upped to life in prison. I think all guns should be registered and if caught with an unregistered gun, long prison term. Registering guns in my opinion is no more an infringement than requiring ID to vote.

Where does it say in the 2nd a gun has to be registered?The reason why is because they knew a corrupt Gov would seek the registered out first. No what needs to happen is wild west punishment. you get caught with a gun in ya hand during a crime, boom boom go night night. get caught stealing anything over 100 bucks,its a hanging.
Sleep with another mans wife or vice versa,a hanging. Rape a person? cut off your junk and hang ya.

prison dotn scare the people like it used to. prison needs to be hell again. Sock parties for insurbordinate prisoners is a start. Bread and water only for prisoners. 12 hrs forced labor a day.and mandatory education that if they fail to pass they get time added to their sentences.