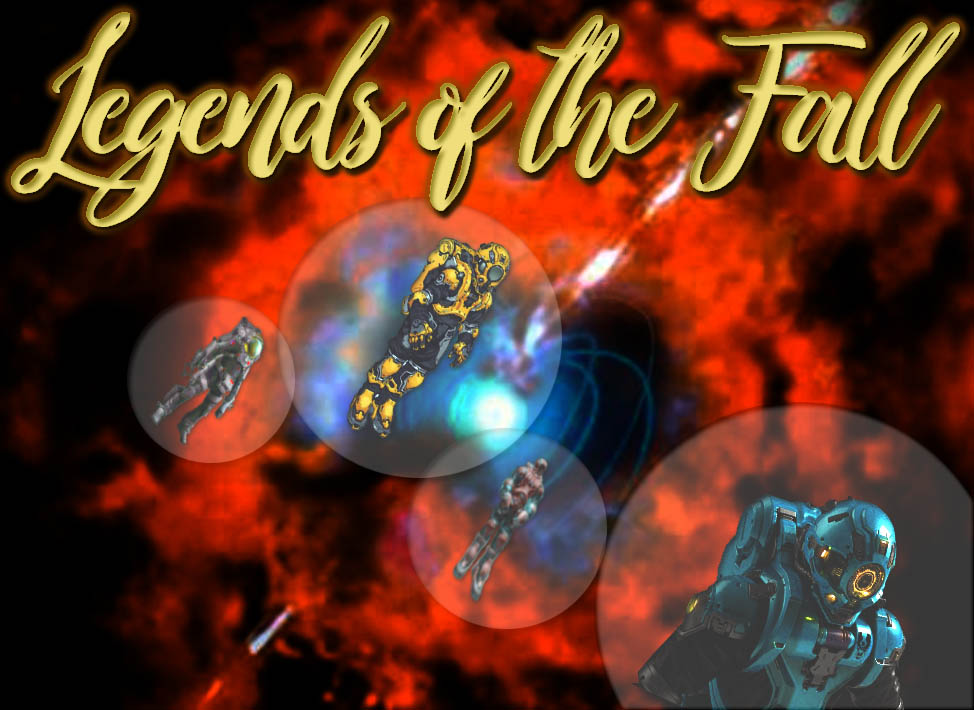 William was rather bored at the moment.

He needed a distraction so he flipped on his RonCo Televisor and said, "load up the current Game-Show, The Fall". The screen flashed three times informing that it's loaded and ready for viewing.

He scoots back into the Halo-Chair and as it form-fits to his body, the sound fades up to an announcer speaking....

"Never before have we experienced an energy-surge in the air as we do now, because today is a historical event worthy of being told for decades. I now ask you.... have you ever seen a better group of contestants"?

Half a million people have lined up in a stadium next to a large swirling black-hole that takes up a full city block. The Camera view zooms upwards 8 stories to a huge platform where the Pilots are standing. The crowd stand's to their feet, cheering on behalf of their favorite pilot as he's seen projected on the huge Global View Screens.

"Ladies and Gentlemen.... Boys and Girls of all ages and all Inter and Ultra-dimensional lifeforms, you are in for a real treat tonight. We don't have just one 'Fall Champion' competing... but a total of three" (cheering engulfs the stadium).

"Starting over on our far left... he was the very first "Fall" Champion to grace our stage way back in 2064.... from Norway it's Lars Borger!"

"Next to him is a contestant that has taken more chances in the games than any other pilot and lived to tell that story.. From Argentina, it's our 2069 Champion Pedro Alonzo Perez!"

"And finally.... this 2073 Champion has no problem telling you that he's the greatest 'Fall Pilot' in the World, from Germany it's the one and only..... Hans-Dieter Schmid!"

A Cam-Drone pans overhead of the frenzied crowd as they stomp their feet, yell and clap loudly.

"And just in case your visiting from another planet for the first time.... the rules of "the Fall" are quite simple.... Stay alive and finish the Game!" (the crowd cheers).

"Pilots will traverse as safely as they can through 20 wormholes ending in a section of the universe that's riddled with black holes. If traveling at near light-speed encased in a force-field-bubble isn't scary enough, your opponents will be firing 'spherical harmonics' in the hopes of knocking you out of 3D existence", (the crowd roars).

The Announcer points upwards to the 8 story high 'drop ramp' where the Pilots are looking down upon the crowd. "Champions... you make up the finest Pilots in the World.... you truly are all magnificent and will be forever in our hearts the "Legends of the Fall"........... Are you ready to FALL?"

The three men in unison, at the top of their lungs, yell out... "We FALL for YOU"! The camera zooms in closer to the contestants pointing their fingers at and waving to people in the crowd.

As the sound of thunderous applause fills the whole stadium, there is a build-up of a now deafening sound. It sounds like a low frequency hum, emanating from below the crowd. People are screaming, trying desperately to get away from the tremendous rush of .....

"Blipp, blipp, blipp", the Televisor flips up and William places them back onto the charging dock all the while shaking his head.

He mumbles to himself, "Geez I really hate Reruns"!


edit on 10/7/2021 by JohnnyAnonymous because: Teeny tiny typos.. almost too small to see

Thanks... I've rewritten this so many times my brain hurt... or was that from the fall (see what I did there)?

It originally started out still as a game show but 'we' were the contestants, so it was a first person perspective and it was just a game show.. no inter-spacial-ozone-depleting fantastic story line. It evolved 5 more times.. LOL

AnyWho... Appreciate anyone that read it..
Johnny

Oh man.. that would've been great and maybe in another dimension he is out and about researching and looking into the mysterious aspects of the 'after-life'.


Thanks Dude for reading it
Johnny

Is that you Rob? Johnny?

I’ve read some of your stuff, you vastly underestimate your writing abilities or was it like me, you only struggle structure?

Anyway this story is AWESOME!

Since I’ve not seen this “rerun” may I beg of you to please finish the story you started?

You caught me hook, line and sinker Johnny!
I’d put coin down that you’ve hooked others as well !!!!

edit on 08-19-2021 by PiratesCut because: fixing Swamp Yankee speak

That's excellent, Johnny! I was looking forward to the adventure of the Fall Guys, but the abrupt ending made me smile.

I love the graphic you made to present your story.

The part that "got me" was the crowd in the stadium being self aware enough to stampede when they knew someone was
shutting off their TV show! Creating new Sy-Fy is mind boggling difficult, the entire field has been so saturated I'm not surprised you just didn't spontaneously combust during your time writing.

Don't give up on your writing it's brilliant!

The few thoughts I shared.. LOL.. the actuality is I had to trim that down also as it was almost as lengthy as the story itself

originally posted by: NoCorruptionAllowed
For a minute there, I almost thought I was reading a Robert A. Heinlein book!

Is that you Rob? Johnny?

I love Heinlein, so for you to say that just makes my day.

Thanks for giving it a 'look-see'

originally posted by: PiratesCut
a reply to: JohnnyAnonymous
You caught me hook, line and sinker Johnny!
I’d put coin down that you’ve hooked others as well !!!!

To be honest I was just hoping no one's eyes would burst into flames from reading it.


Thanks for reading,
Johnny

That's excellent, Johnny! I was looking forward to the adventure of the Fall Guys, but the abrupt ending made me smile.

I love the graphic you made to present your story.


"The Fall Guys".. that would be a great spin-off as it follows the travels of the "IPFoFP" (or "Inter-Planetary Federation of FALL Pilots"), or something like that..lol

Yes.. for some reason I felt compelled to try some graphic, not necessarily in the sense of a 'Book Cover' graphic, but I wanted to try it anyway. I labored for awhile whether or not to create such.

And to be perfectly honest, I was afraid it might be considered over the top. But I kept reminding myself that I'm not entering a Contest and that it was just for fun.

BTW... I consider my Graphic skills to be just as sub-par as my writing skills... or in other words, I believe I can suck in two categories at the same time.

originally posted by: Caver78
Always love good science fiction so Hats Off to You!!!

Your very kind, thank you!

It's getting increasingly hard to try and come up with anything Sci-Fi related that doesn't have the illusion of being a 'cookie-'cutter' clone or copy.

Appreciate your reading my story.
Johnny

I think you've got talent in both disciplines. One helps the other. I love doing graphics, too. I just can't dedicate as much time to it as I did before and my Photoshopping skills are rusty; thus, my writing has also suffered.

The problem I have whenever I want to write anything creative is that I must first visualise the plot. I try to imagine the story, not as a whole, but as layers, like in graphic design. I find I can visualise characters, places, events, etc., better and jiggle things around. Just like with drawing programs, once I'm happy with what I "see", then I merge the layers and, hopefully, a story that makes sense emerges.

I believe that the way you described your creative process is just like the "layers" I mentioned; it's easier to discard or add bits when it's modular.

originally posted by: Encia22
a reply to: JohnnyAnonymous
I believe that the way you described your creative process is just like the "layers" I mentioned; it's easier to discard or add bits when it's modular.


You know... you just might be on to something there.

I had never thought of it in that way, but your right about those layers. I may have to dwell on that a bit more. Thanks for getting my brain to look that-a-way.

Would love to see another of your stories entered in our little ATS Contest. Awhile back you submitted a fine entry and I'm going to re-post the link in case others might have missed it. Maybe we can sneak another one out of you?


Folks check this story out when you get the chance:
Living by Numbers [FYM2021]

I'm working on a story, in my head at least. It's a subject matter I know very little about, so some research is in order. I have the same problem you had, I can't decide from what perspective to recount it. Hopefully, I'll figure it out before the deadline.

.....I can't decide from what perspective to recount it. Hopefully, I'll figure it out before the deadline.

I've really been thinking about your thoughts of layers.

Yeau.. Thats what hurt me in the beginning with the first idea of a game show. I kept switching back in forth from being the contestant.. to what was being viewed and watched on television. Here's where it started all going terribly wrong for me.

The original version had a dual sound stage where two different game shows are being recorded and our intrepid contestant was on the wrong game show and can't leave.

Soooo.. then I started thinking about what some of the other game shows might be like and after awhile and a number of rewrites and weird directions like "what if it was in the future"... that I went looking deep into what was happening elsewhere. In the end the only thing left that was in the original is the game show.

My long point is... the more I think about it.. I was peeling away layers and looking at other parts of the story i didn't know existed till I opened up some different doors (or LAYERS).

And was that ever a long trip to just say.. yep, I was working with that 'layers' theory of yours and never knew it?

edit on 10/7/2021 by JohnnyAnonymous because: Teeny tiny typos.. almost too small to see