posted on Oct, 4 2021 @ 04:31 PM
link
This is a sad story of failures on the part of so many. From the school, to the hospital, to other parents. I didn't write the byline which I used as the title, it is from the article, but I think we really don't know when she contracted it. It may have been 5 days before she died, or earlier. We don't really know. 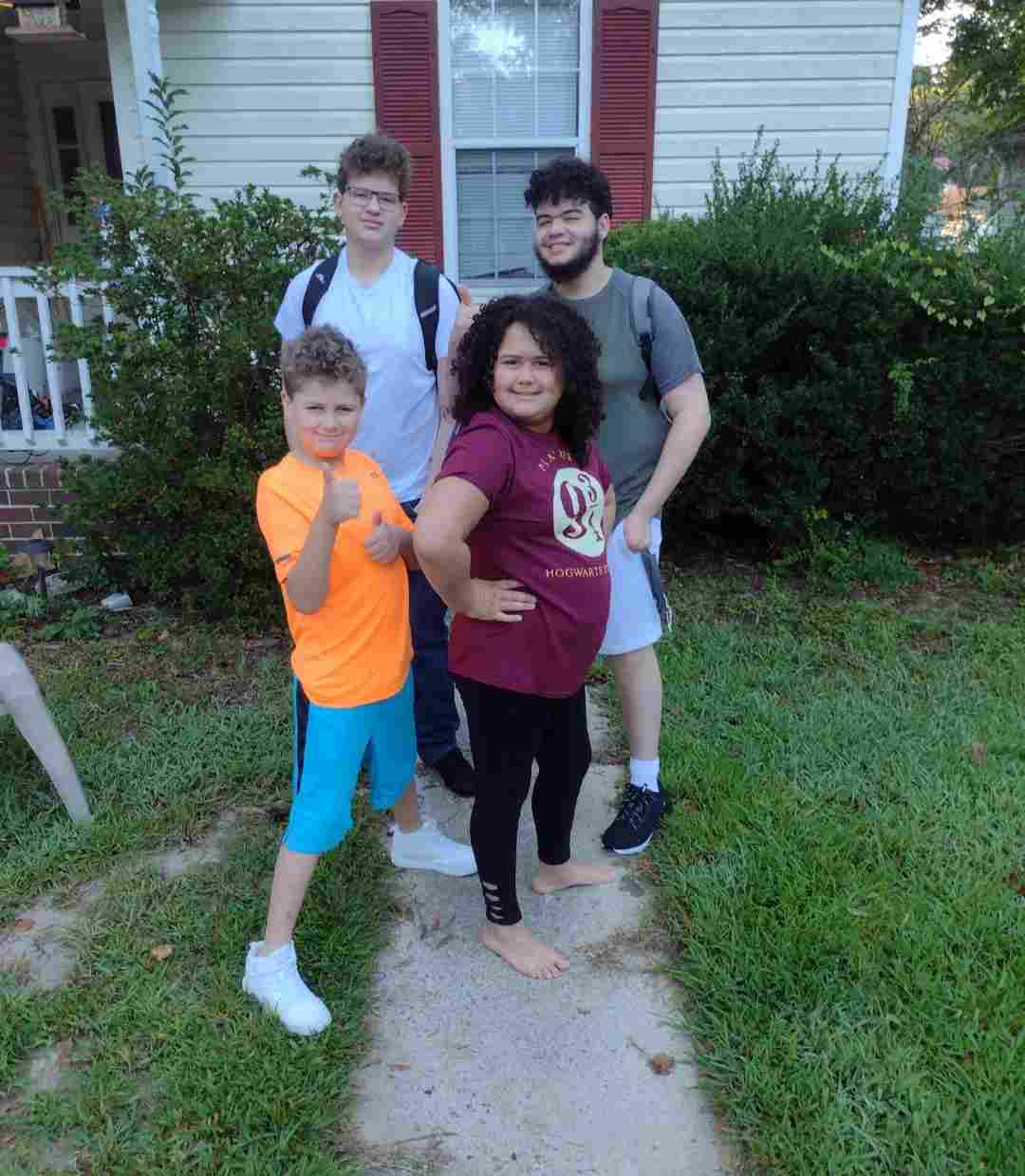 The girl in the middle is Theresa Sperry. She was 10 years old, she contracted coronavirus and died 5 days later, she was totally healthy, but too young for the lifesaving vaccine. Her parents and older siblings had all been vaccinated and her school had a mask policy however her mother said in an article that she blames other parents who keep sending their kids to school sick for infecting her daughter. Teresa would help in class by helping sick students get to the nurses office and if they went home sick, she would bring their backpack and homework to them. Her parents say the best way to honor her is to wear a mask and get vaccinated. Here is what CNN reported, and very FIRST OF ALL, I want to say that I really think there is no way in heck to know where exactly this little girl caught the virus, because as her school district superintendent tells CNN,

Teresa's classroom specifically, there have not been any cases of Covid, Gordon told CNN.

"There were zero cases before the tragedy with Teresa, and there are zero cases as of my communication to you. Contact tracing is still currently underway."

Here is her progression of symptoms:

On Sunday evening however, Teresa developed a nagging cough, so bad it forced her to throw up, so Nicole took her to a local emergency room where she was tested for strep throat, which came back negative, as well as a Covid but those results were pending.

"They did her chest X-ray and when they came back, they said that there was no signs of Covid pneumonia, her lungs were perfect, beautiful. They didn't seem concerned," Nicole said. So they went home and Teresa continued to quarantine.

Within 24 hours, she stopped breathing and was rushed to a local hospital and ultimately transferred to Children's Hospital of The King's Daughters (CHKD) Norfolk where she died.

The hospital says it does not know why they did not test her the same day she came in. It is not their policy to wait several days before covid testing a patient.

This little girl never had an illness in her entire life, only to be decimated by coronavirus in 5 days.

Apart from a broken bone in her arm when she was younger, Teresa was a healthy 10-year-old social and happy girl, who never had the flu or even an ear infection, Nicole said.

One of the things she told us before she got sick, was that her job was to be the 'class nurse' to take the sick kids from the class to the nurse's office," Jeff said. "And you have to understand my daughter, this is who she is, helping people is my daughter, it's not something that she wouldn't have wanted to do."

At Hillpoint Elementary School, the protocol is for the classroom teacher or an adult to contact the main office with a "Code C" if a child is feeling ill and one of the administrators, or a school nurse will come to the classroom to pick up the student, Dr. John B. Gordon, III, Suffolk Public Schools Division superintendent told CNN last Thursday.

"We are still investigating to ensure that this process was followed with fidelity," he said.

"Our daughter was perfectly healthy, Nicole wrote on Facebook. "And would have continued to be here if people would have stopped sending their sick kids to school."

A parent had sent their student to school after a positive coronavirus test and possibly exposed 80 students.

So it seems like this little girl was failed by the system every step of the way. First and foremost the parent who sent their child to school sick. But we don't know the full story on that and the article doesn't even say whether this student actually infected Teresa or not. Then failure by the school, not following their own policy of having an adult take the sick students to the nurse. If that is really what happened. The school district is investigating that. We don't know what really happened on that either. Then the hospital who says it is not their policy to wait several days to test patients and they don't know why that decision was made. Again we don't know the full story there either. And would fixing any of these failures have saved this girl's life or not? We may never know.

I thought so too. Nobody will read this and think critically though, watch.

SoundisVibration
+9 more
posted on Oct, 4 2021 @ 04:38 PM
link
Seems to me like these vaccines are mutating the virus to attack children.

I don't know which one she is, but if she's the fat one, being fat is not healthy, and obesity is a high risk condition.

Wait, yeah, I found an article with just a pic of her. She was a little plump.

I don't mean to be hating on the fatties. I'm a fatty myself. Just pointing out that obesity likely contributed to her death.
edit on 4 10 2021 by tamusan because: (no reason given)

I literally was just about to ask if she was obese.

Tragic here is another one.

She has no pre existing conditions, health 15-year-old girl who unfortunately contracted COVID and died.

originally posted by: MotherMayEye
a reply to: Chalcedony

The logic of keeping infectious isolated, and the immuno-comprimised safe just doesn't exist

What logic does fit however is spreading this thing, regardless of mortality, as fast as possible.

So, let me get this straight.

Kid's class didn't have any instances of illness, and the dolt mother decides to blame the non-sick anyway, instead of the overly confident vaccinated family that probably brought it home & spread it around?

Ok then. That's kind of up there with missing the forest for the trees, innit?

Children's covid-19 deaths must be very rare for a news article and an ATS thread to be written about such a death.

originally posted by: Nyiah
a reply to: Chalcedony

So, let me get this straight.

Kid's class didn't have any instances of illness, and the dolt mother decides to blame the non-sick anyway, instead of the overly confident vaccinated family that probably brought it home & spread it around?

Ok then. That's kind of up there with missing the forest for the trees, innit?

Not any argument there RoScoLaz5.

originally posted by: MotherMayEye
a reply to: Chalcedony


Nobody sheds spike proteins, if that's what you're implying. Not from the vaccine, not from the virus. That's not a thing. The spike proteins are all attached to either the surface of the virus, in the case of an infection, or the surface of a human cell, in the case of a vaccinated person. In either case, they don't exist alone outside the host as part pf their natural life cycle.

Furthermore, even if some of them did manage to get outside, they would have no way of getting back inside someone else in such a way as to cause damage.

This is really my problem with all of media. Ok. I am not trying to be mean here these people lost their daughter and it is sad and horrible no matter what way you slice it however....

This and other articles not just about Teresa or the topic of coronavirus but every single topic on the "news" seem to be these pieces that don't highlight any actual FACTS. Her parents blame other parents sending sick kids to school. Well there were none in her class. Her parents say she had to escort sick children to the nurses office. The school district says that is not their policy. Her parents say the hospital didn't test her. The hospital says their policy is not to wait several days on coronavirus testing. So what is the truth? They are just making news out of someone's thoughts, opinions, comments, whatever. And passing it off as fact and truth to suit their agenda. It is not just the coronavirus topic. It is every topic on the news.

Then why did Pfizer make exposure to participants in their vaccine studies a reportable event?

8.3.5.3. Occupational Exposure
An occupational exposure occurs when a person receives unplanned direct contact with the study intervention, which may or may not lead to the occurrence of an AE. Such persons may include healthcare providers, family members, and other roles that are involved in the trial participant’s care.

If you have scientific conclusions to share, please share them with Dr. Been because I'd love to hear his thoughts.