Is it really a surprise that Britain is Screwed ?

posted on Oct, 4 2021 @ 12:17 PM
link
When we have a PM who doesn't have a clue , a Home Secretary who is invisible and not open to answering questions and a Chancellor of the Exchequer who doesn't understand the meaning of a simple word like "literally" !

Day 1 of the Tory party Conference and Chancellor of the Exchequer , Rishi Sunak , has today said in an interview with Sky news that "we are throwing literally the kitchen sink at helping them get a new job" in relation to those who will lose their jobs due to the end of the furlough scheme .... really ! , literally ?

Bloody idiots the lot of them.

I remember when Tories were well educated and intelligent , now it seems they're just stupid which probably explains why our National debt is now 100% of GDP , Johnson and his band of idiots have pulled the plug on Britain and it's us Plebs that will be paying the price for the rest of our lives.

Video of the most idiotic thing said by a Chancellor

I know it won't matter to most but it matters to me. 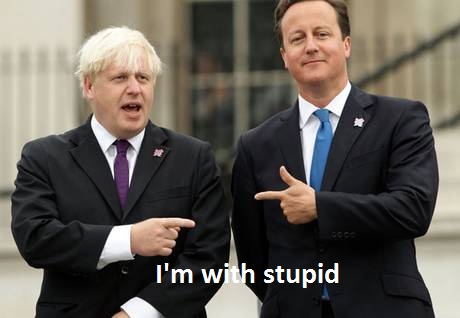 Well, their gonna need a lot of kitchen sinks, but then there's the problem of staffing to literally throw said sinks, it takes skill... it's a Conservative Conference Conundrum.


Politics is politics regardless of country , only an idiot wouldn't understand that.

I guess you get what you voted for…enjoy!!!

posted on Oct, 4 2021 @ 01:53 PM
link
Once you have lost the ability to differentiate between "figuratively and literally", you're on the slippery slope to losing "phrasing".

Back in the late 80s, early 90s, I worked for the Tories. There were three main kinds back then.

First, your old school patriarchal Tories. They believed they were better than everyone else but that brought certain responsibilities. I could never be one of them but they respected me and what I did. Patronising but very supportive.

Then came the young(ish) ideologues, fired up by Keith Joseph and Margaret Thatcher. They believed they could change the world. I could be one of them and they respected me and what I did. Fast, passionate, encouraging.

Then came the Young Conservatives, who had to change their name from the Federation of Conservative Students because they had become a toxic brand. They believed the world owed them a living because of who their parents were, screw everyone else. I would never want to be one of them because every man jack of them was a See You Next Tuesday.

Guess which sort Alexander Boris dePfeiffel Johnson was and is? And David Cameron?

Thing is, you don't need to have inside knowledge to know what shower of cnuts they are. We were warned over and over and over and over. We saw decades of underfunding in the regions, a gap filled largely by the European Social Fund. We saw what Cameron's first government did to local services. We saw what Bodger Johnson did as Mayor of London. We saw what Jacob Rees Mogg and the other hedge fund politicians did before, during and after the referendum. We had Operation Yellowhammer. We had the writings of Dominic Raab, Pritti Patel and the like, describing the British workers as the laziest in the developed world. We had Patrick Minford, the Leave campaign's favourite economist, tell us repeatedly and openly that the fishing and farming sectors would be the first to get it up the arse after Brexit. We had decades of economic history that told us what self-described free market politicians did when faced with a crunch like Brexit. We even had Bodger lying to the Queen to her face.

And people still voted for them.

They're still making no secret of what they are doing. Look at the Parliamentary business over the last two years. It's the equivalent of putting a price on everything and sticking guards at the door to make sure the workers don't nick anything.
Bodger got a mystery donation of £27,000 worth of organic takeaways during lockdown - he looks like he enjoys his food but twenty seven grands worth? We had the redecoration of the private apartment in Number Ten, courtesy of several anonymous donors. We had £38 BILLION spaffed on shonky contracts last year. We had the unelected Lord Frost yesterday or today, making it sound like he and Bodger's oven ready deal was nothing to do with them, it's all down to the nasty EU. On Friday we even had Kwasi Kwarteng telling us the current disruption is the start of the post-Brexit economic readjustment before the Party could spin it into another glimpse of the distant sunny uplands.

And people could still vote for them again.

posted on Oct, 4 2021 @ 02:47 PM
link
They don't give a toss about looking stupid(although I think they are just highly devious).
They would give a toss if there was any kind of opposition who posed a threat to their power.

Sadly Starmer is a woke infected blairite fool with the charisma and leadership qualites of a bag of mouldy cabbages,and many of his party are just plain weirdos.
And what was that other party? the lib dems was it-do they even exist anymore?
I havent noticed them saying anything on the news for ages.

Its a hopless state of affairs indeed.
Great timing too-just as its looking like we are at the start of many earth shaking problems the likes of which no government has dealt with before,we get this bunch of goons in westminster.

There's a predicted 700,000 people on furlough looking at losing the job they've been paid for whilst sat at home for the better part of a year and an employee shortage staff in many sectors but the two just don't match.

I can't see office staff who've been sat at home pretending to work on a laptop wanting to have to actually go out and do actual work for about nine quid an hour fifty hours a week.

Utter bollocks drop even for bozzer.


Sadly Starmer is a woke infected blairite fool with the charisma and leadership qualites of a bag of mouldy cabbages,and many of his party are just plain weirdos.


Aint that the truth , if Labour don't get rid of Starmer and his acolytes the Tories have nothing to worry about.

That amount of time with the Tory party having free reign and no threat of an alternative is troublesome.

There just taking their orders from the hidden hand. Controlled collapse of society, build back better, move on to central bank digital currency and the resource based economy.

I guess it isn't a surprise - I've been watching what has been going on in UK for a long time now, and it seems to always get worse. Even Brexit didn't help anything, it only made buying stuff from UK a pain for me, so I don't do it anymore (used to do it quite a lot).

As a bright side, though, this whole planet is screwed - it's only a matter of details, degree and time.

It looks as if many countries are 'experimental templates' for some kind of control system test, and once the test is complete, it will be implemented all over the planet. One-World Government is already almost here, all it needs anymore is 100% implementation everywhere.