Speaking of grannies. One evening I was talking with my mom and dad. We were discussing food in the old days and how it was prepared. Neither of them had electricity in their youth. All cooking was done with fire. My grandma, my moms mom was legendary in the cooking department. She made everything from scratch. When I mean scratch, I reallllllllly mean scratch, as in she actually minced her own meat, made her own soy sauce, made everything right from the garden. One dish has been mentioned many times in my life, her dumplings….

My mom and dad both said they wished so much they could taste them just one last time before they died. Can you even imagine how good they had to be? I guess my grandma would take beef and mince it up, and add her ingredients, and make her own wrappers too. Imagine how good they must have been that my parents still savored those dumplings some 50 YEARS later!!! Even my dad pined away for those dumplings and he actually did not like Asian food all that much.

I make some seriously mean dumplings, so good there is never one single one left over. Friends and family rave about them.
My mom said my dumpling were just OK 😩. I guess when you have had my grandma’s, nothing can even hold a candle to it. The problem with these secret recipes is that nobody ever wrote anything down, it was all made by taste/smell and what you had on hand! My mom said she could never replicate how my grandma made it. She said part of the problem was all the individual ingredients were homemade and that just isn’t done anymore.

On the other side of the family my MIL had a great baked bean recipe. I asked her for it once and she wouldn’t tell me, and now it has also died with her. Pretty sad if you ask me! 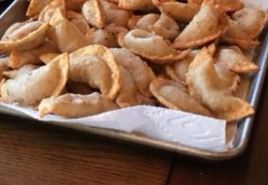 I love me some dumplings, and man that sucks that recipe died. The work people used to do to create our food when now we have such convenience, even though not as fresh or nutritious, is astounding.

The problem with these secret recipes is that nobody ever wrote anything down, it was all made by taste/smell and what you had on hand!

My grandmother did the same with her cornbread dressing. Everyone in the family loved it, but she didn't have a recipe. She knew what to put it in, and as she made it she tasted and adapted the seasonings. Every year it was identical. So, over the course of two different seasons I watched her make it, and wrote things down. Interestingly, in those two years what I wrote down was a little bit different. Last year I decided to make it for us (her and I), so I adjusted what I had written (not by taste, but by consistency), and by god it—if except for one small hesitation in the final process—turned out pretty close to hers. This year I know what I need to do differently, which I almost did last year.

Hopefully I'll nail a written recipe that is near identical to hers, in a couple of years, in her memory.


My grandmother did the same with her cornbread dressing.

posted on Oct, 3 2021 @ 07:43 PM
link
We make lots of stuff from scratch. Although I do not have chickens, I do buy eggs from someone who has chickens running all over the yard. We buy a half a cow from some people we know that naturally grown cows, one hundred percent grass fed and organic. It isn't cheap, four bucks a pound plus processing hanging weight, but it is good beef. Half of it goes to my close family for Christmas presents. Those certification papers cost about a sixty cents a pound, I just can't tell the difference in the taste of the meat from being certified but to sell it one hundred percent grassfed and organic most people want proof it is. They have grown it natural like that for years before they got it certified. Oh well, the beef is really tasty.

I learned to cook from a lot of old people over the years, and we use older cookbooks that have real cooking recipes in them, all they had was scratch stuff years ago. We get the marrow bones with our cow and we make bone broth to freeze, boy that makes good french onion soup and minestrone soup. You also have to have the good cheeses to make those soups, none of that commercial cheap crap.

I now have one daughter and my granddaughter that are making medicinal chicken soup, it took me telling them I am not going to be bringing soup over every time they sneeze. So FINALLY they are starting to make it with my recipe I gave them, what if I get sick or die, my medicinal soup recipes would be gone. You have to taste as you make it, all ingredients are different, onions can be mild or strong, garlic is the same way, so are spices and the quantity of meat varies by the size of the package. Just the right amount of wine is added at a certain time. Sage turns to eucalyptis type chemistry if cooked too long, so a small amount is added initially, then the bulk is added later on. Spices have different tastes and properties when added at different times, it depends on what taste or medicinal property you want to predominate your soup.

I look at people who get a whole care of the highly processed foods at the store with sorrow, they will destroy their health with all that crap. Yeah, twenty percent of the diet that way is not too bad, we are presently at fifteen percent or so now, but too much causes issues.


My grandmother did the same with her cornbread dressing.


Oh yeah, that dressing is a meal in itself simply on taste alone. lol


So FINALLY they are starting to make it with my recipe I gave them,

Scratch made biscuits and bacon gravy. It's quite possibly the entire reason my dad's side of the family, aside from my grandmother who just cooks it, has weight issues. I've sat in the kitchen with her for over a hundred times of her making it and I can do the exact same measurements and timing, it's good but it's not even slightly close.

I'm going to miss the hell out of her not only for her food of course, so many things really, yet this is a thread about family food.

Ok, stay with me here for a second.......this is going to sound crazy...........
The difference in taste is from the vibration in her body, or her actual being.
That is why two people can have the same ingredients (and same cookware) and the taste is different.
Your grandma's essense is in there, her love, part of her is in there. Sounds whaco but it's true.
This is also why when people make food with true love put into it, it always taste good, when people are angry or hate what they are doing it tastes horrible.

Your grandma's essense is in there, her love, part of her is in there. Sounds whaco but it's true.

Interesting take. I like it. Like a work of art, you put your essence, your being into to and it radiates...you, your energy. Same with food. Your energy transfers into the food to give it a vibrance. Same with growing your own food, too. The effort and energy you put into growing these from seed, they take from you and root, and become a new growth holding you within. Until harvest, and the cycle renews.

This is also why when people make food with true love put into it, it always taste good, when people are angry or hate what they are doing it tastes horrible.

You taste the love in those fast food restaurants, eh? lol

posted on Oct, 4 2021 @ 11:59 AM
link
my grandma was the same. never wrote anything down. she would always say, " you just add a little of this and a little of that". She had a recipe for a pizza dolce pie ( sweet riccotta pie) which was to die for. Tried to get her to write it down before she passed. We tried to replicate it but it does not tatse the same. Tried different internet recipes. Nothing is the same. Just our fond memories!
a reply to: JAGStorm

I have my grandmother's pasta e fagioli, lasagna, tomato sauce, pizzagaina and struffoli recipes among others.

edit on 4-10-2021 by AugustusMasonicus because: dey terk er election

That is what I was watching, a 86yr old grandma making lasagna..........
she said she had been cooking since she was 8, basically making noodles for 78 YEARS!
She didn't even have to look when she rolled, she knew by the feel...ugg I want that lasagna!!!

posted on Oct, 21 2021 @ 01:18 PM
link
I often take recipes from the Cooking Guide cooking blog how-to-boil.com... . There are a lot of good ideas of interesting and delicious dishes.

when you say dumplings, as a southerner, i think something drastically different. Im a fan of the egg dumplings you find in paprikash.

But if im eating asian food, i usually have some dumpling or something along those lines.

My family recipes are a mix match of hungarian and new mexico, with some west texas thrown in for good measure.

My grandfather passed on several of the dishes he grew up on. I just made palascenta last weekend, actually, at moms request. Wife, being anything but hungarian, chose to have strawberry crepes instead. Paprikash is another one that is big. Cabbage rolls at least 2 times a year.

Grandma grew up in El Paso among the indians. A lot of what i make in that regard would be very palatable to a New Mexican. Lots of green chile, chico's, ristras hanging in my garage, the 5lb bag of white corn flour. WHile I am able to grind my own corn, render my own lard, etc....i don't generally bother anymore. Although ill make chico ristras from time to time so i have some chicos, i buy chile ristras usually already made.

I haven't had good paprikash and ages.

when you say dumplings, as a southerner, i think something drastically different.

I was rightfully confused the first time I encountered an Asian dumpling, being accustomed to dumplings of the chicken and dumpling sort.