What we are cheering on is the state pulling its finger out and dealing with irresponsible people whose screw things up for everybody else.

Its like ... when your neighbor has an unruly dog...


So unvaccinated = unruly dogs, got it.


Where I live we're got hit really badly by Delta. Like, really really badly. Nobody could figure out why, until they found that there was a group of people who weren't vaxxed, and who wouldn't wear masks, holding a bunch of private parties in a bar on the edge of town that was supposed to have been shut down. They were ground zero for a super spreader event, they spread it to their friends and their families and their kids took it in to the local schools. I don't even have a clue how many people died because of them.


You mean somebody pointed out they weren't in compliance and someone yelled WITCHES! Burn them at the stake. It's their fault we're all sick.

Where I live in rural America, less than one-third of the county is vaccinated and very few people where masks. Our infection rate is way under what the yearly flu used to be before the rona. The health department here tried to force everyone to comply with our governors mandates, but the police said they would not enforce it, so they had no teeth to bite with.

It isn't hard to find info for what I'm saying. There are other counties with the same experience. This is why when I see a story like yours above, all I see is the same witch-hunt we see nationwide.

To use your own metaphor, you might not have witches, but we do. And they're flying round on broomsticks turning people into toads. You campaign for your community, but don't pretend that a witch hunt isn't the right response in mine.

My entire community suffered because of a few irresponsible people. When they got sick the rest of us got locked down. Even though we were acting responsibly.

It's like you've got one kid who brings a gun to school to flash it around because they think that it's cool. And suddenly there's metal detectors on every door and a huge hulking security guard is telling you to take your pants down and to squat over a tray so that he can cavity search you.

My entire community suffered because of a few irresponsible people. When they got sick the rest of us got locked down. Even though we were acting responsibly. 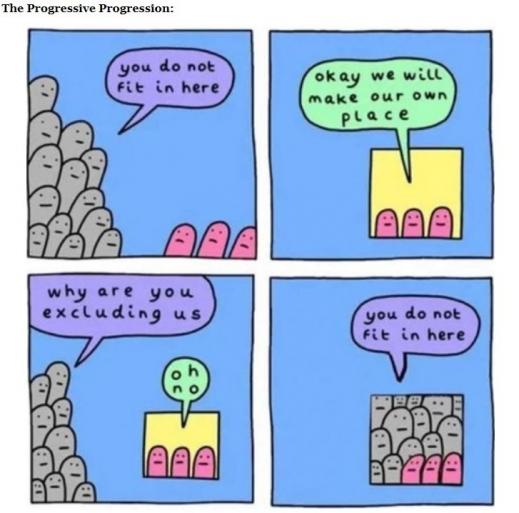 The larger group goes along together and feels strange about those who choose not to follow along so they push them out. When that group forms its own thing and does well on its own, then the larger group still feels strange about it and demands to be included, and they still can't handle it when the smaller group doesn't do what they do all the time, so the cycle repeats.

Some people just don't need to be like everyone else all the time and it drives those other people crazy for whatever reason.

An example would have been what happened with social media. They censored certain voices, so those voices went to form Parler where they could talk amongst themselves. Suddenly, even though they did what the larger group demanded they do, that smaller platform became a "threat" the larger media companies silenced by removal from the internet carriers entirely. The smaller group was not allowed to have its own place but rather it either had to not exist at all or operate within the conformity of the larger group that could not handle the dissent.
edit on 2-10-2021 by ketsuko because: (no reason given)

originally posted by: MConnalley
Do something about if not, then this is all just talk. Simple as that.

I do something about it. I live my own life. The problem is that others do not value independence anymore, so they attack those of us who are not afraid to be ourselves and live as we wish.

Be the change you want to see in the world.

I don't care if these people want to go into a collective and subsume their persons into a faceless whole, but I do care when they tell me I have to. I wish there was a way they could get what they want without having to force me to go along with them.

This is a discussion board, maybe that remark would be valid at a do-something board

Want to add to the discussion?

You do something about it by living your life on your own terms.

Something along the lines of: You do you, I'll do me.

Many of us are. Just because you can't see it, or choose not to, means nothing.

It's just talk? That's how many things begin...with talk.

Haven't read the post, but being German and coming from a hardcore SS family, with my grandparents generation and 2 generations before that having been very passionate ideologists during the utilitarist reign, but my father counting himself to the extreme left and on top of that blindly trusting the Merkel regime, I've had to think a lot about why people trust authorities and I've come to the conclusion that most people indeed seem to carry an intrinsic desire to trust authorities, much like a baby child. So yeah, no explanation really other than the degree of manifestation of that trait itself varying from person to person.

I am not sure if it is our culture (German too here) or genes that are responsible for this really apparent authority love.

You probably know sentences like "This should be forbidden?" and "Is he she allowed to do this?"

One would think the second WW would have opened some eyes to this issue but instead it's not criticaly questioned, it's even endorsed.