The nightmare scenario for Britain.

posted on Sep, 29 2021 @ 02:17 AM
link
You have what looks like a rational middle-class man in a car. Who claims that laws have been changed and that the driving of army trucks to help the fuel crisis is just a ruse to bring in Martial law to stop protesters. Then another man with a strange voice, maintains he has information on the increasing levels of lockdown that will require a full-on Nazi state, he maintains that the laws have already been changed to facilitate this matter. If you resist. The terrorist laws have already been tweaked. He makes a scary forecast for December or January. I truly hope he is delusional, but something seems to ring true.www.bitchute.com...

Nah it's all made up. Lockdown stopped a few months back in the UK and lockdown powers were scrapped a month or so back.

The Police, Crime, Sentencing and Police Bill is a huge attack on civil liberties and seeks to remove the right to protest and tweaks anti-terror laws but it hasn't been passed yet and highly unlikely to make of through the Lords.

I do a lot of travelling on UK road networks for work. I can confirm there's a lot of Army vehicles on the roads at the moment, mainly trucks. I'm not sure what to make of that but there's definitely some kind of troop or logistical operation happening atm.
edit on 29/9/21 by Grenade because: (no reason given)

Let's hope so, I don't like the smell of what he said, especially with what seems to be happening in Victoria and Canada.It's just if the cases rise with the kids going back to school they might start up again.

In Canada and in some Western Countries they are desperate with the propaganda for the vaccination they even used the freed Canadian from China to push the vaccination in Canada.

I very much doubt any of what the kid was saying will come to pass.

For example, anyone who tries to forcefully remove my kids without my consent will need more than a badge and some pepper spray. Will find themselves with a KA-BAR where the sun don't shine.

I don't think British soldiers would stand for killing and maiming their own people.

The Germans are very like the British , but they did put a lot of Germans into the Camps. If you don't follow orders you will be called a terrorist and subversive and that will be the end of it.

Hitler improved the living standards for the vast majority of Germans, hence their acceptance of his policies.

Not what's happening now! The people of Britain would be in uproar. They aren't coming after a minority group with an imbalanced influence over society. This is the exact opposite of what happened in Germany, it's not a popular uprising, its the select few trying to subdue the population.

They'll hang for these treasonous acts.

Some people would think they're preparing us for a saviour. I'll be dubious should one materialise.
edit on 29/9/21 by Grenade because: (no reason given)

posted on Sep, 29 2021 @ 07:17 AM
link
They have a massive shortage of truck drivers.
Just in time delivery and minimum stock adding to the problem 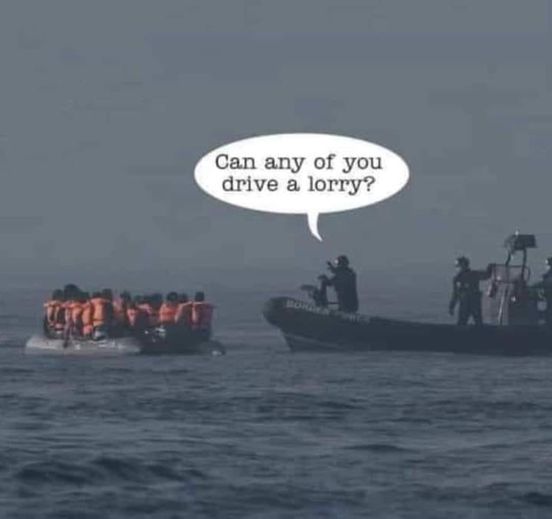 Apparently the army staff, drafted in to drive the ambulances, cant transport people with serious conditions to hospital because they are not allowed to enable the blue lights and drive at pace or speed.

I'm hoping we are training these soldiers to allow them to go from A to B without any sorts of additional bureaucratic red tape in the middle.

I'm thinking if Boris and his ilk manage to ruin our weans Christmas that might just be the final nail in there coffin.
edit on 29-9-2021 by andy06shake because: (no reason given)

Apparently the army staff, drafted in to drive the ambulances, cant transport people with serious conditions to hospital because they are not allowed to enable the blue lights and drive at pace or speed.

I'm hoping we are training these soldiers to allow them to go from A to B without any sorts of additional bureaucratic red tape in the middle.

Well that would make a lot of sense to do so. I imagine, if they use common sense, that they will figure this in to future training. Thus future proofing should it ever be something that happens again.

Martial Law is not going to happen now or anytime soon.
Just shows how little you know and understand Britain and its people.

That being said, Boris and his gang are undoubtedly a complete set of twats.
The truly frightening thing is that the only other viable alternative at present are hopelessly incompetent and completely out of touch with the people they allegedly seek to represent.

posted on Sep, 29 2021 @ 09:17 AM
link
Something is going to happen here before November next year to suspend elections and declare martial law. The only way it won’t will be if they still believe they can cheat at will.

We will turn into a police state but eventually it will turn into gorilla warfare here with all our guns and ammunition. You people in the rest of the world are crazy for disarming.

We don't have guns and ammunition in our homes here in the UK for the most part.

Nor do we wish or require them to be available to the public in the same manner as the USA.

Something is always going to happen.

Using whose army? We don't have enough soldiers to impose martial law on Macclesfield!

originally posted by: AndyMayhew
Martial Law in the UK?

Using whose army? We don't have enough soldiers to impose martial law on Macclesfield!

Lol, that's very true to be honest. Be lucky if they had one soldier per town or village.