posted on Sep, 24 2021 @ 04:38 PM
link
On August 12, 1985 at around 6:30pm, 8 year old Equilla Hodrick and her mother were sitting on the front porch of their Bronx, NY home. When Equilla's mother turned to talk to some friends, Equilla ran off after the ice cream truck and disappeared. NAMUS

Her mother was 8 months pregnant at the time and assumed that Equilla would return shortly, as she usually did. Police described the little girl as "street smart" and there was a sighting of her later that evening at an arcade, but that sighting was never confirmed. From what i read, Equilla's mother, Terona said that it was her niece who saw Equilla at the game room. Police launched an extensive search and bloodhounds tracked her scent to Webster Ave. near the Metro-North train line. She has never been seen again.

The detective in this case, Frankie McDonald has been deeply affected by it and detailed Police efforts to find Equilla in a 2015 interview...

"Our bloodhounds picked up Equilla's scent and they led us down to Webster Ave. by the tracks of the Metro-North line," McDonald explains. "We had heard from the neighborhood people that a lot of homeless were camped out in the enclaves down there, so we went to do a search."

At that point, though, the searchers ran up against the logic of Metro-North's bureaucracy. It took McDonald hours to get through to the agency to get permission to search the tracks. The railroad didn't want to stop the trains, thereby inconveniencing their commuters. McDonald let them know that the neighborhood might not like the fact that train schedules were considered more important than a little local girl's life.

"We never did get them to stop the trains," he says. "They only slowed them down. We looked for quite a while but found nothing."

When McDonald got back to the 52nd Precinct, the search had become a news story. Only the story wasn't about Equilla Hodrick's disappearance, it was about how some cop had slowed down Metro-North. A reporter from Channel 2 stuck a mic in McDonald's face and demanded to know who'd made the decision to slow down the trains. McDonald looked at the female reporter and responded, "Nobody made that decision. We made the decision to search for a missing child. What is your story? That an eight-year-old girl is missing? Or that a few assholes from Westchester came home to a cold dinner? I don't have anything more to say to you."

McDonald spent his last two years as a cop on the Hodrick case. He chased every lead obsessively, but nothing ever came of it.

Equilla's mother, Terona was so deeply appreciative of Det. McDonald's dedication to trying to find her daughter that she named her son after him.

Equilla was 4'11" and 80lbs when she went missing. She was wearing a white, red and yellow tank top and cut off jeans with light blue sneakers. She wore eyeglasses but I cannot find a description of them or a photo of her wearing them.

Here is a picture of Equilla: 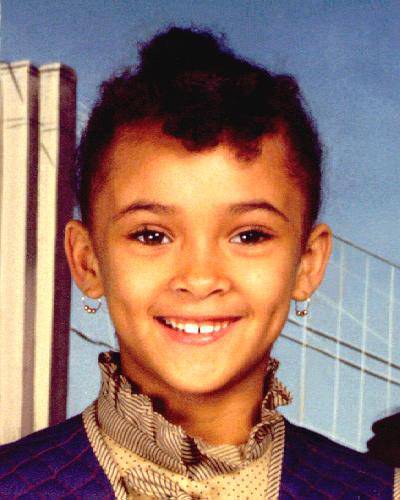 So sad. God Bless Equilla and det McDonald for his dedication to this case.

Shocked the train wouldn’t shut down, and the lack of morality in that situation 👎🏻

This reminds me of a documentary I watched not that long ago and this may have been a part of it. If I recall correctly several children from that area went missing in a relatively short period of time. I'll have to find the name of the documentary but it had a load of information on cases like these. It was absolutely heartbreaking.

posted on Sep, 24 2021 @ 10:28 PM
link
Thanks for the stab in the heart story and links. May God have already punished those for her disappearance to absolutely atrocious deaths.
Reminds me of the ending of that Jack Nicholson movie "The Pledge" where he goes crazy at the end, searching for the little girl. Messed up world we're in... :-(