And It begins: Afghan Evacuees at Fort McCoy Face Charges of Domestic Violence, Sex with Minors

Two Afghan evacuees who were living at Fort McCoy in Wisconsin have been arrested in unrelated cases. One was charged with crimes against minors, the other with assaulting his wife, the Justice Department announced Wednesday.

Bahrullah Noori, 20, has been indicted on four charges that allege he engaged in sexual acts with minors. According to court documents, Noori touched the genitals of one victim in three separate instances, once using force, in the barracks and bathroom at Fort McCoy. The indictment also alleges that he tried to engage in an unspecified sexual act with another minor victim.
...

Yep, we told you that most of the "Afghan evacuees" were not vetted. According to Newsmax less than 3% of Afghan evacuees are S.I.V. (Special Immigrant Visas) holders. Which means less than 3% of the evacuees that are now living all over the U.S., including in American bases or U.S. cities, were actually vetted.

Meanwhile the Biden criminal syndicate and their thugs in the democrat party left behind in Afghanistan an unknown amount of Americans, legal residents of the U.S. as well as not reporting to our allies that the criminal Biden syndicate was taking all of our troops out of Afghanistan which left many citizens from allied countries also stuck in Afghanistan. This is why the Parliament of England voted to have Biden in contempt, and now France has done something similar due to Biden thinking he can control all of our allies and they must do as he wishes.

This is one of the first cases, and you can be sure that many more will occur, of one Afghan man committing sexual assault against several minors, including by use of force, with his victims being between the ages of 12 -16, and the other Afghan evacuee violently attacked his wife. BTW, there are several reports purporting that many of the evacuees men came to the U.S. with wives whom are minors.

I have to wonder whom still thinks that the criminal Biden is a good POTUS since pretty much everything he has done has gone wrong, as well as his criminal democrat syndicate is transforming the U.S. into another socialist hell hole?

And that’s what’s been reported. Pretty equally terrible and horrific in some of the other camps as well.

Real or a stolen Identity ? 👁️

I read about this and saw it on the news. These men are going to have a RUDE awakening if they expect to get away with that here. Maybe that stuff flies over there and women put up with it but Wisconsin women are no joke.

Those con artists have been conning brainwashed and gullible Dem supporters for decades.

I read about this and saw it on the news. These men are going to have a RUDE awakening if they expect to get away with that here. Maybe that stuff flies over there and women put up with it but Wisconsin women are no joke.

It depends on where it happens. There was another article, during the Obama administration, about Afghan refugee teenagers raping a young American girl and doing other things to her that I rather not repeat. When I first presented that case it was immediately put in the LOL forum. There was only one thing that was wrong with my thread. Although the boys were not Afghani, they had come to the U.S. under the Afghani refugee program. Lots of people from the Middle East whom are not/were not from Afghanistan have come to the U.S. through the Afghani refugee programs. I re-posted that thread with more evidence and with another article that explained that people actually had to complain to the state government because there was evidence it was true but the democrats in power in that state, and the newsmedia all claimed the reports were false.

Now that Biden and democrats stole the election the same things will continue happening, mostly in democrat cities/states. If this hadn't occurred in a military base and had occurred in a democrat state like Minnesota, this probably wouldn't have made news.

Which makes it worse. If an S.I.V. holder has raped minors what does it say about the 97% whom are not vetted?

BTW, there was a poll done in several Middle Eastern countries, including Afghanistan, a while back (2013) in which people were asked if they supported suicide bombers. in Afghanistan 39% of the respondents said they do support suicide bombers. In Palestine it was 40% of the people whom responded. 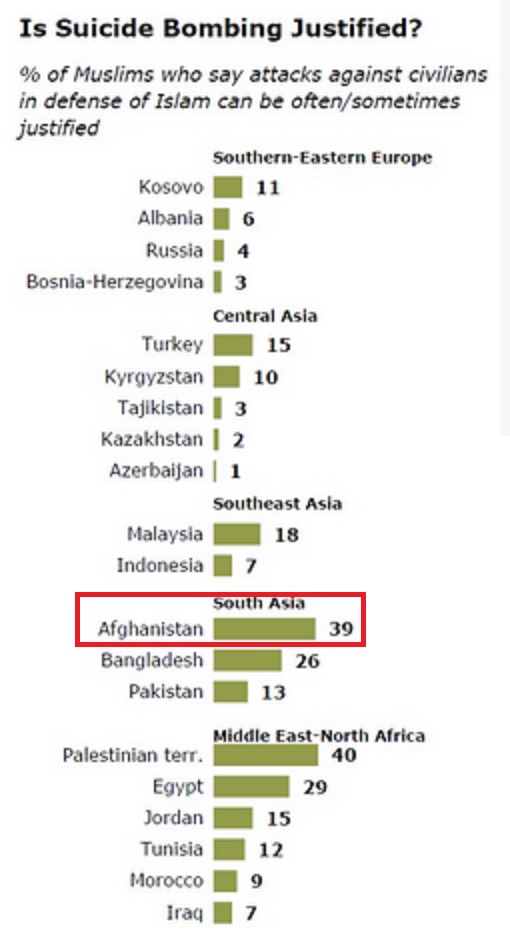 That's not mentioning the fact that in Afghanistan it is completely legal for adults to marry minors.

posted on Sep, 23 2021 @ 10:36 PM
link
islamic ideology is not compatible with the Constitution and Western society. It is not a religion. It is an idelogy and should not be allowed in this country. Sadly, most Americans, especially politicians/law makers, are not educated on this and f'd our country by allowing it here.

What those POS did is OK w/in islamic idelogy.

posted on Sep, 23 2021 @ 11:02 PM
link
Wow won't it be nice when they are released from camp with their given US dollars in their Toga ! They say the biggest growth in arms sales have been to women...sorry for the young boys....

posted on Sep, 24 2021 @ 01:06 AM
link
This activity is endorsed by Joseph Robinette Biden Jr and Hillarity Clinton.

When a foreign population comes to a western country, they want to instill their way of life. Look at the delights of Anjem Choudary, Abu Hamza al-Masri, et.al. who have spent their lives bringing radicals to the UK and US (and more) to change our way of life in a more Columbus way than the Vikings.

Back when the Rotherham child abuse scandal broke in the UK about what (someone correct me) ten years ago; the argument among some of the Greater Middle East communities was that this was accepted culture. It might be accepted culture among Afghan immigrants newly in the west, but Rotherham was predominantly second generation.

So, coming back to the original topic; before I go too far on a tangent. Yes, we should expect immigration from other parts of the world to cause this sort of rise in crime for offenses we consider grossly offensive, but the difference is we should react with a large stick and put the point across that it is not acceptable. Then we should send those offenders back, to present an example of why they should start to integrate and respect Western law.

When in Rome, you should do as the Romans do.

posted on Sep, 24 2021 @ 01:37 AM
link
I am not surprised and EU is getting the Afghan Evacuees. But arent they the ones who worked with the western/NATO side?

Real or a stolen Identity ? 👁️

The news report didn't say. Just said he had an SI visa.

posted on Sep, 24 2021 @ 08:17 AM
link
Seriously pisses me off when I read media outlets referring to attacks on children as 'sexual contact with a minor'. Yellow bellied apologists sicken me. Call it for what it is, rape, child rape. And for Islamists that loudly proclaim their belief in the superiority of their Sharia, let them have the usual sentence Sharia endorses and hang all child rapists.

And just for the record, child rape is not a political issue and pretending it is, is just the sort of deflection child rapists love.
edit on 24/9/2021 by teapot because: political trolling on a Thread about child rape sickens me

posted on Sep, 24 2021 @ 12:01 PM
link
a reply to: TwistedPsycho
Rotherham is just the tip of the iceberg. It's still on going, they are finding more rape gangs but they are predominately Pakistani Muslims.