posted on Sep, 22 2021 @ 07:03 AM
link
Everyone knows that the Chinese can copy anything from famous brand clothing and watches to complex military systems. But it turns out that they copy entire cities. Only very few people live in these cities due to high real estate prices. I want to show you, members of the forum, a few of these cities. 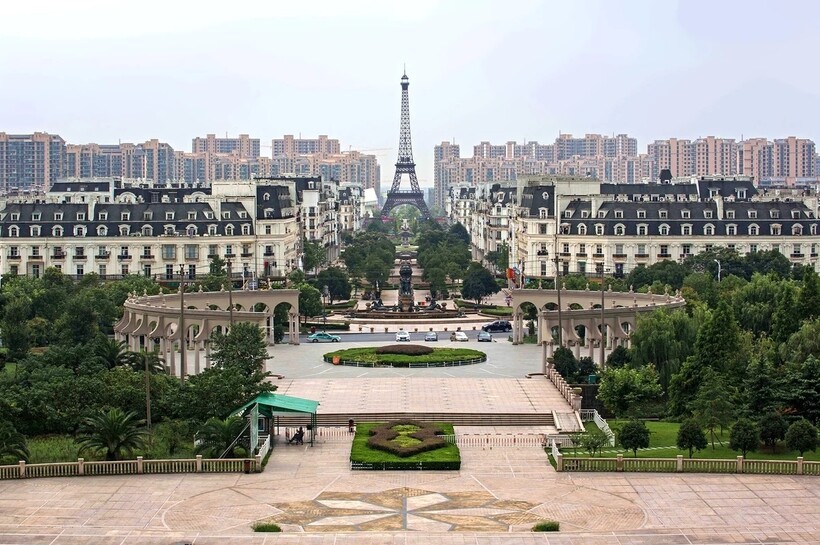 Not far from Shanghai, there is the town of Tianducheng, which was built in 2007. It is a miniature copy of Paris with its small, only 110-meter high Eiffel Tower, small Champs Elysees and a small Luxembourg Gardens. Many residential buildings have also been copied from Parisian buildings. 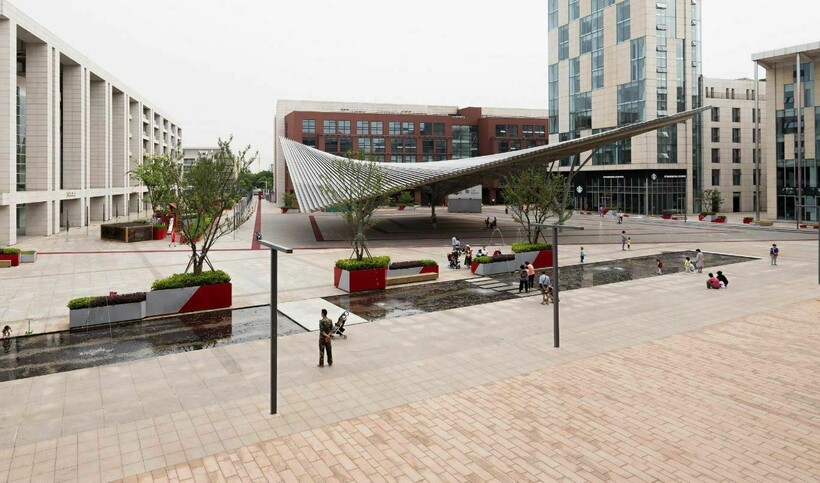 Another suburb of Shanghai was named Anting after a German artist. It was built in 2006 and stylized to resemble German architecture and Bavarian flavor. Narrow streets, brown and red buildings with pointed roofs and turrets, as well as monuments to Goethe and Schiller. Cobbled sidewalks, lots of greenery and fountains - as if you come to one of the old towns of Bavaria. 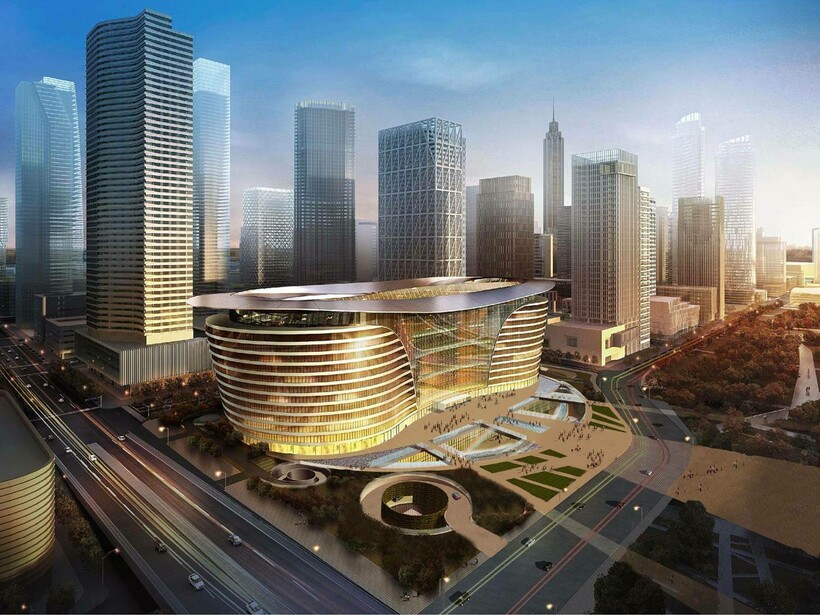 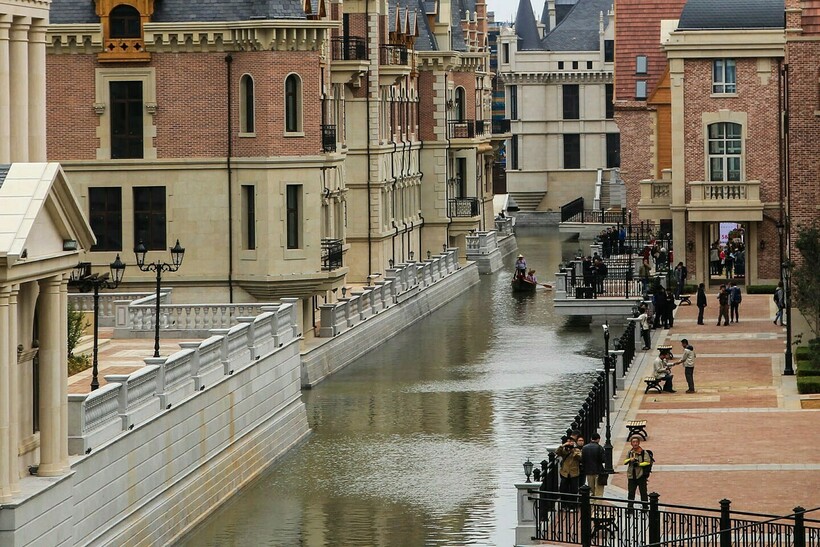 Dalian is a port city in Liaoning province with a population of over 7 million. The city has many theme parks and entertainment venues, but one of the most memorable was built in 2011. This is Little Venice - an area with canals, bridges and European-style houses and gondolas. 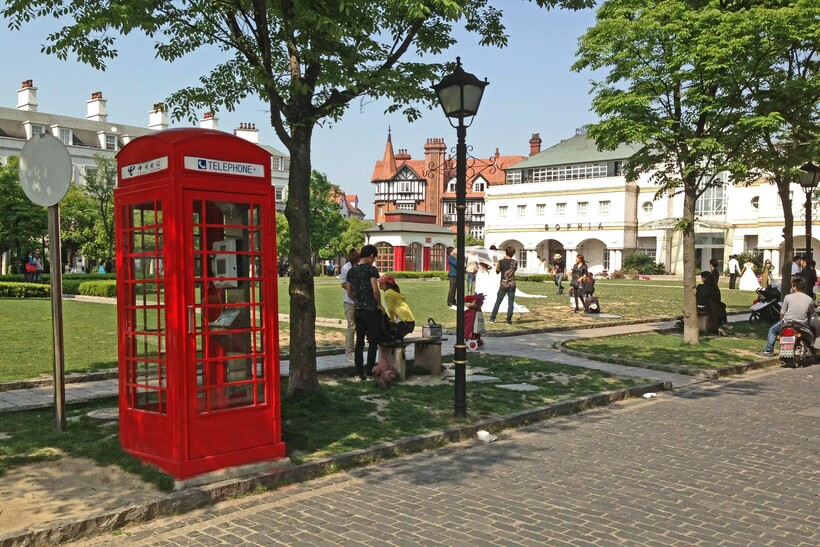 Thames Town, a few kilometers from Shanghai, is a miniature copy of England and its main attractions, both from London and from other cities. While building the city, the Chinese tried to adopt the British style in the form of red brick houses, Victorian terraces, corner shops and red telephone booths. 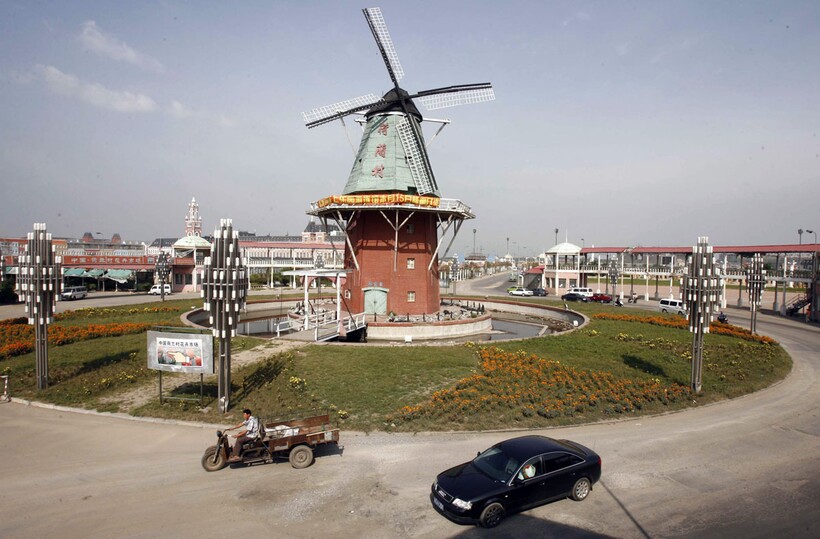 Gaoqiao is a large industrial city with many factories and factories, but one part of it was rebuilt as a Dutch village. It is worth saying that the "village" turned out to be huge: a sea canal, many buildings, department stores and restaurants, as well as an exact copy of the Amsterdam National Museum with replicas of paintings and statues.

In fact, there are much more such cities-copies. I have shown you only the most striking ones.

Are “the elite” of the world building there very own version of Epcot Center?
Or maybe....It’s A Small World theme park for their brats?
Chinese are an odd bunch.
I like that paper Mâché city that is crumbling and melting away myself...
Why why why?......
Kinda cray cray.......No?

I think expecting the population to keep going and also to prop up chinese economic numbers.

Im not sure though, this has been an ongoing thing for awhile.

originally posted by: CptGreenTea
Imagine living in these cities. Bizzare copies of other cities. But no traffic and low noise.

Traffic and noise are not the only thing missing.
There is no heart.
You can make a physical copy of Paris but it would never feel right.

posted on Sep, 22 2021 @ 08:21 AM
link
I wonder if they are building a little Europe as a tourist trap
maybe an experiment to see which kind of Euro works better

wonder if they could get some bricks and rats and crack houses and re-create Baltimore?
edit on 01032020 by ElGoobero because: clarify

posted on Sep, 22 2021 @ 09:01 AM
link
Looks like a country with an identity crisis due to destroying and burying their own culture and history in order for a brutal communist regime to take over. I would say that's exactly what it is. It reeks of a regime that appreciates culture but, knows the reality is it can't have any culture of their own, otherwise they would not be in power.

The only remaining culture they have was brutalized and tortured for performing yoga in the Falun Gong. The Falun Gong is all they have to give any idea of what China use to be along with a terra cota army and a massive wall.

Really sad for a country that invented the compass, gun powder and paper. All they are now are blue print thieves.

I don't know why y'all can't see the genius of this. China is just building a big theme park, so that when they destroy the rest of the world, they can visit the places that 'used to be'.

During the Soviet Era for quite different reasons the Soviet's did pretty much the same thing with copy's of US towns meant to train spy's and soldier's about the US, for spy training and for training unit's meant to invade the US in the event of the cold war turning hot.

Though most of these fake town's resembled at the latest 1950's and early 1960's US mid west style town's they were not actually meant to be lived in and those that did were usually retired KGB agent's whom played along pretending to be Americans.

Likely there was something similar tucked away in some backwater US military base hidden from the public or in some warehouse like building someplace.

Were the Chinese are different is that this is not meant to train spy's or soldier's but for there own consumption.

This American town was in Russia.

I don't know why y'all can't see the genius of this. China is just building a big theme park, so that when they destroy the rest of the world, they can visit the places that 'used to be'.


I don't think it's brilliant. I agree more with the opinion of my colleague Stupidsecrets. I think this is done to attract tourists, but tourists would rather go and see the original than the copy. In addition, this is done from the lack of cultural movers, which is characteristic of cosmopolitan communist regimes.

You will be very surprised, but in the United States there are many more cities with the names of Russian cities than in Russia with American ones. Naturally, there is only common in the name, and not in appearance)))

A lot more people in the US than know it may be of Russian Ancestry so that does not actually surprise me, people from Russia would also have heard of the land of opportunity and those with the means would likely have headed west if given the chance to do so.

There are also Russian people in Alaska which of course was once part of Russia though these days they mostly speak English and there are orthodox Russian community's there as well complete with traditional Russian orthodox onion domed Church buildings and even monastery's if I recall something I watch a long time ago, I would not be at all surprised to find that some also exist in Canada though I am not aware of any and likely more than a few in the US mainland proper as well.

The division between the US and Russia other than them being different nations is mainly down to nearly a century of opposing ideology's and propaganda painting one another as utter evil and educating there children accordingly.

In Alaska there is apparently also a community of OLD believers whom separated from the Russian Orthodox church when it underwent some kind of reforms in the 17th century so a very old but small community whom are like a Russian American version of the Amish if you like.

posted on Sep, 22 2021 @ 12:07 PM
link
a reply to: LABTECH767
There are no traditional disagreements now. Unfortunately, Russia and the United States have reversed roles. which have been throughout the 20th century. Now the United States is a communist country with a communist ideology, and Russia has immunity against this disease.

That is quite possible, I am actually a moderate Socialist in my own political beliefs coming from Britain and these days in the minority here apparently.

The US though I would not call it communist as they do not care one bit about the people I would call it a Corporate Paradise as only the rich and the corporations are catered for, people are property of those corporations or should be in those corporations eye's hence the erosion of individual right's and national liberty's they are under going, it ends pretty much the same though a police state for everyone not in the elite and a totalitarian rule for those that can not afford to live better.

It was actually something one of there former WW2 Generals and later Presidents warned them about albeit a bit too late to stop the steadily growing snow ball of corporate power and government infiltration by them (Basically a slow and hidden coup).

posted on Sep, 22 2021 @ 12:18 PM
link
a reply to: LABTECH767
By my convictions, I am a monarchist, or rather a supporter of the Russian autocracy.
About doubts about the communist present of the West. Just replace the "driving force" of communism from the proletariat at the beginning of the 20th century with national and sexual minorities at the beginning of the 21st century, and everything will become clear for you.
By the way. social justice issues are highly relevant.

originally posted by: CptGreenTea
Imagine living in these cities. Bizzare copies of other cities. But no traffic and low noise.

My thought too. I think they are kind of lovely.

Tianducheng is less impressive in person, it's a housing area with population of 30k.

Yugiapo is just a handful of buildings.