posted on Sep, 21 2021 @ 02:11 PM
link
The past Fall, a purple ethereal object hovered at the edge of my property and hung out there for a pretty little while.

The video of this object in the youtube link below, makes it seem like it is a purple bird perched on the fence. It is not a bird and it was not tangible. It was a ball of purple light in the middle of the day. It looks like it has a white or silver tip.

If you have thoughts about what the purple light is, I look forward to hearing them.

Not sure if they actually eat people but Beware !

If it was a cloud of mist or water vapor, it should have been associated with either rainbow hues, or just look white / gray. I cannot explain purple. Truly intriguing.

posted on Sep, 21 2021 @ 02:45 PM
link
There are quite a few purple birds out there, and not sure what area you’ve taken the video in to rule out it being one, but maybe someone with some video editing skills can do a stabilised edit so we can see if there is any movement of the object in question.


Did you walk towards it? Did you shout at it?

How did it leave? Disappear? Fly away?

originally posted by: Atsbhct
a reply to: jannybobani9
Do you have more of the video or is that where it ends?

Yes if it was there for a while why was the video cut?

Why did no one walk out there for a closer look?
Did it disappear, fly away, still there?
Like they said there are purple birds. Even if not from your area I have had escaped pet birds show up in my yard a couple of times.

You said it looks like a bird, that was very short and bad video. 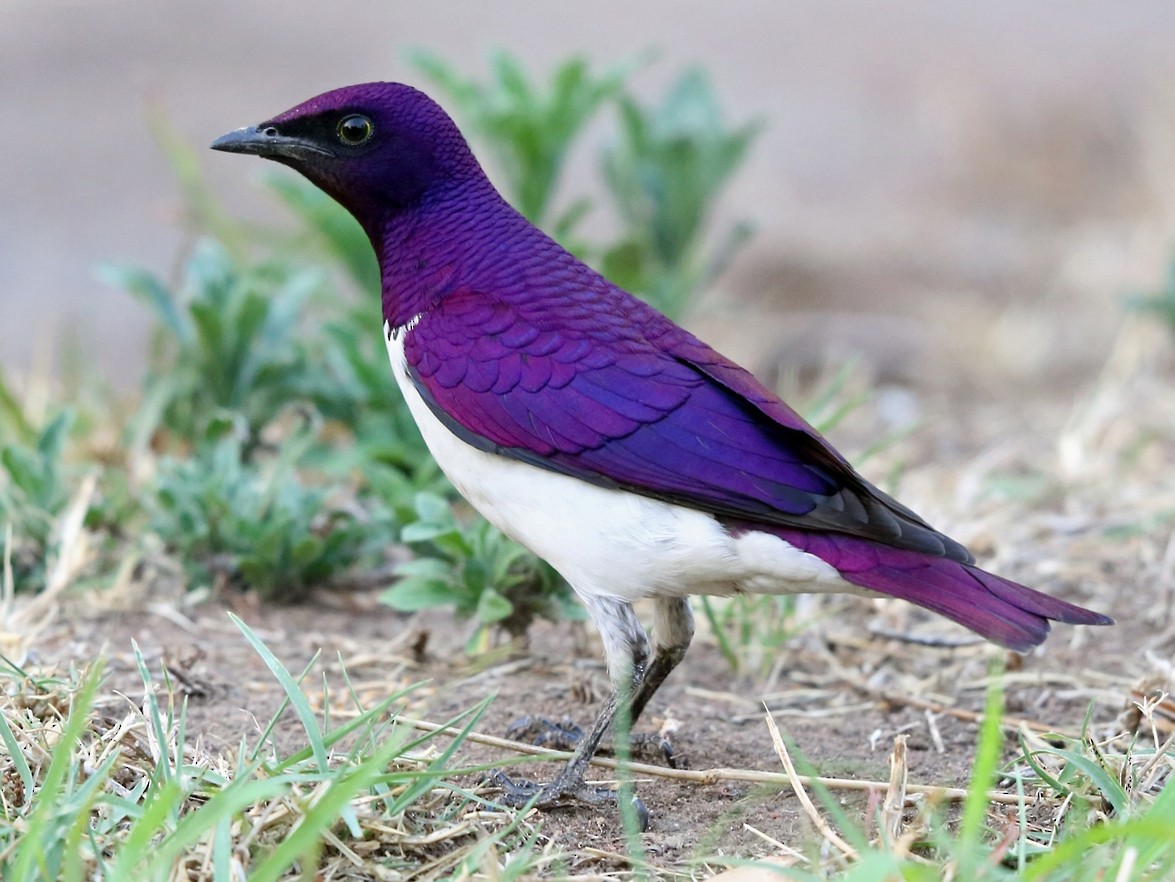 I did. I was standing with my neighbor and we both saw it, eventually, my whole neighborhood saw it. We walked down the steps towards it and could not see it when we got closer, could only see it from a distance.

Another problem is the video makes it seem like a solid object. It was not solid, it was a hue that went in and out. It also changed shape. But on video or in photos, it looked solid.

The longer video includes my friend and I talked and laughing, walking towards it, and walking away. I don't feel comfortable sharing that because it has a lot of our conversation.

I know many are saying it is a bird or it is trash. It was not tangible. It showed up daily for a month, my whole neighborhood saw it. Some of the days it hovered on top of a tree.

I got on ATS for an entirely different reason. I thought since I am here, I'd post and see what people here think.

I still walk out on the deck and look for it, all the time. It is gone.

originally posted by: daskakik
a reply to: jannybobani9
Looks like a piece of purple trash to me.

Likely, not moving around and any oddity would have been videoed a lot longer I would think! Especially if it were supernatural and hovering lol

In my part of the world they say if you see something like this, dig, there might be buried treasure.

Then again it might be the spirit of someone buried around there.

Could it be a purple plastic bag hanging from a branch? 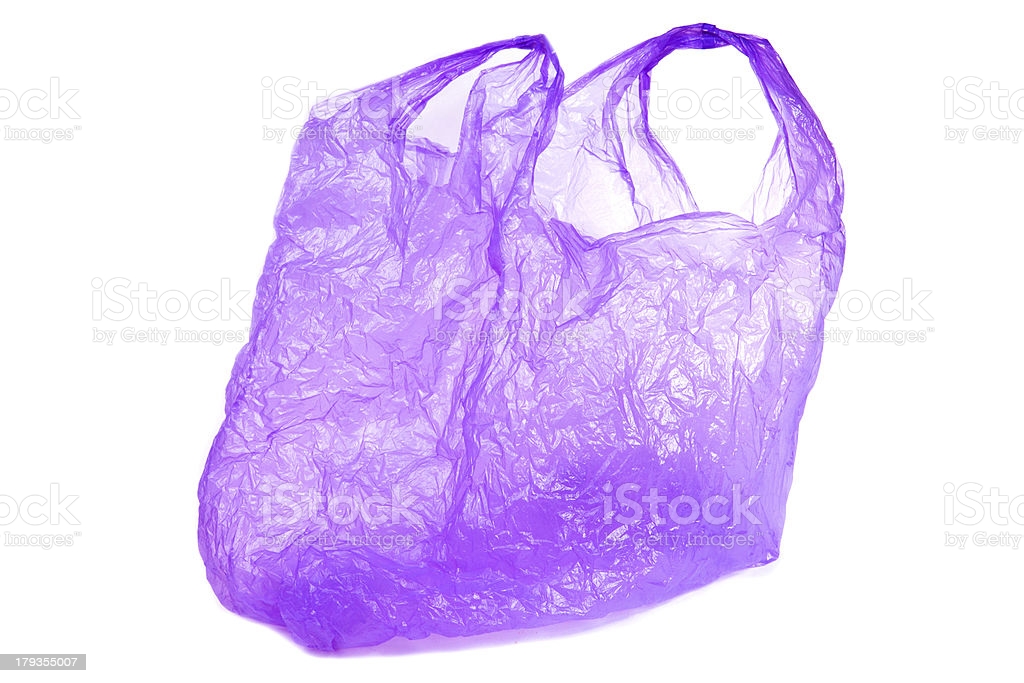 If I was just reviewing the video and had no testimony from the camera holder, I'd say it's a purple martin.

Couple of posts back the OP said everyone in the neighborhood eventually saw it. So I'd be ruling out bird, since you would think at least one person in that group could tell a bird from a purple orby thing.

I'd be interested to know if there are any underground lines thru there? Has the area a mining history?
Anybody think to go out there with dousing rods? While the Purple thing has disappeared walking around with the dousing rods may show it's a place-based anomaly with or without the orby thing being present.

posted on Sep, 21 2021 @ 06:36 PM
link
Cool video. It does look like a violet something starling, but they don't behave the way you've describe, unless maybe the brush between you and the bird played tricks on your eyes. Would love to see more purple birds around here.

originally posted by: jannybobani9
The past Fall, a purple ethereal object hovered at the edge of my property and hung out there for a pretty little while.

The video of this object in the youtube link below, makes it seem like it is a purple bird perched on the fence. It is not a bird and it was not tangible. It was a ball of purple light in the middle of the day. It looks like it has a white or silver tip.

If you have thoughts about what the purple light is, I look forward to hearing them.

I can't think of anything it could be except a video compression artifact. I've seen them occur before in high contrast areas, and where you see it is on top of the whitest part of the white line.

About 2 years ago, I downloaded a James Bond Medley video from youtube, and they were using a compression algorithm that produced purple artifacts in high contrast areas. The performers were wearing white coats and black shirts, which of course black versus white creates the highest contrast possible. They don't occur everywhere that black meets white or high contrast areas, just in odd little spots or sections. See the purple thing in this screenshot on top of the performer's nose? 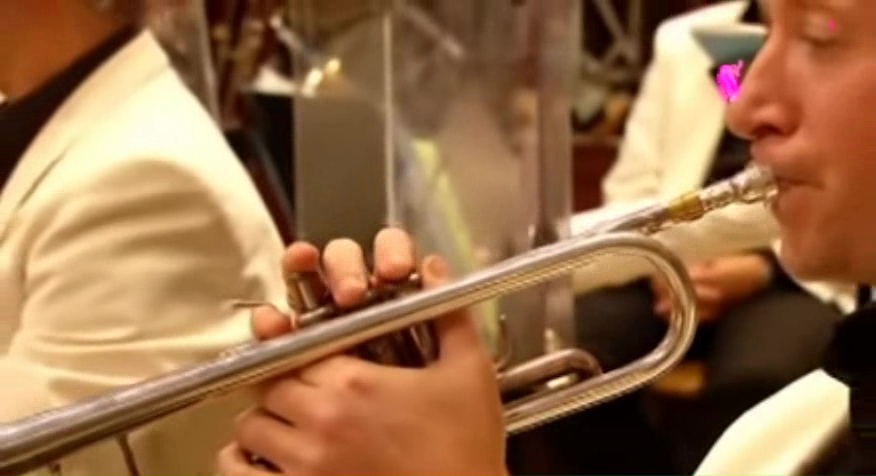 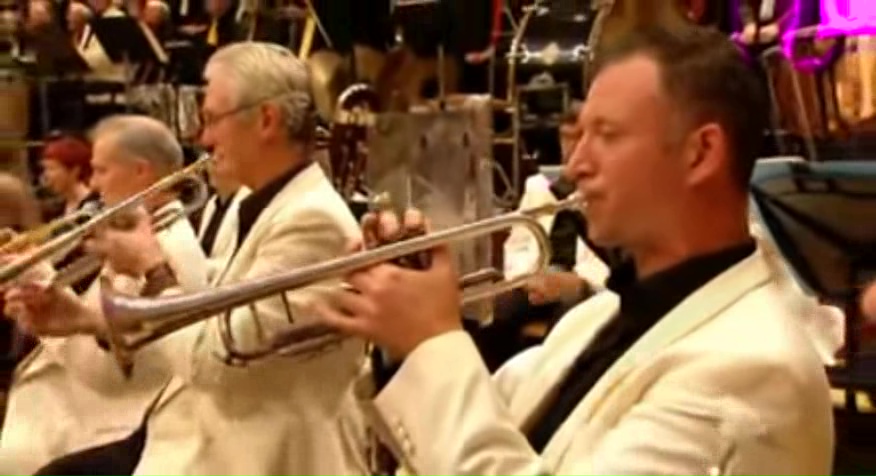 posted on Sep, 21 2021 @ 07:13 PM
link
Super cool. At the beginning, you can see it looks like some amorphous droopy gumdrop, but once it settles behind the fence, I do see how people are saying 'bird'. Nod idea, but there are things in other dimensions that may appear from time to time and definitely may appear semi-transparent (like a dense rainbow).

I have to admit I wanted to strangle you as the camera holder, but fun nonetheless. Thanks for posting.