This crazy Russian apparently thought it would be cool to have ridiculously huge do-it-youself artificial biceps/triceps. He has had them for about 5 years now. 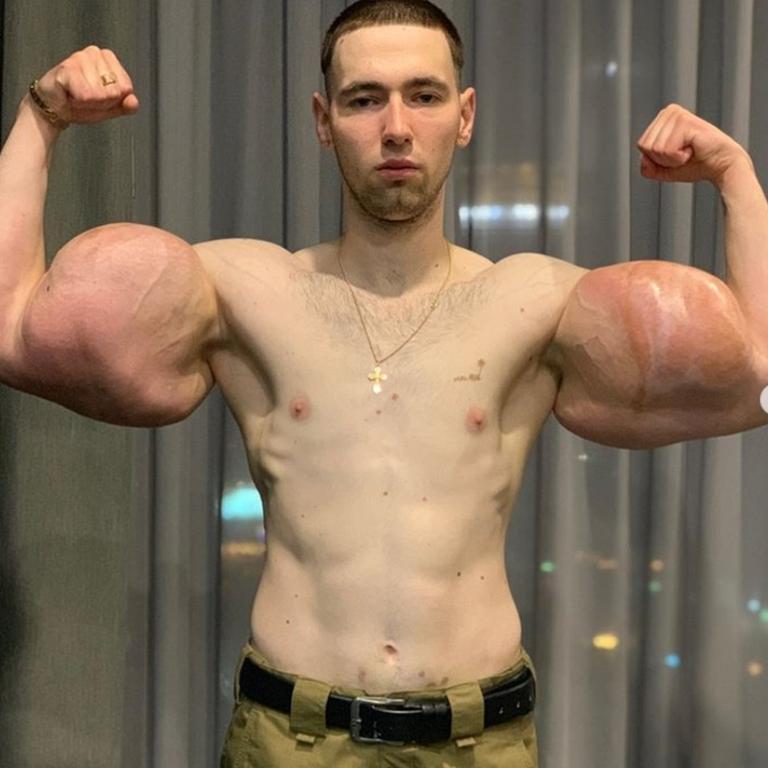 A Russian man dubbed “Popeye” has been warned he faces death unless he has lumps of hardened petroleum jelly from his bulging fake biceps removed.

Ex-soldier Kirill Tereshin, 25, used injections to look like a superman but is now paying the price which may include losing the use of his arms, or worse, The Sun reports.

He has already had his fake triceps removed but now faces the first operation to get rid of dangerous giant implants from his biceps.


Of course, doing this at all is just ridiculous, but IF you were going to do it, why do it to such extreme excess. I mean, it seems like you'd at least want it to appear somewhat realistic. He almost looks like he was proud of himself. 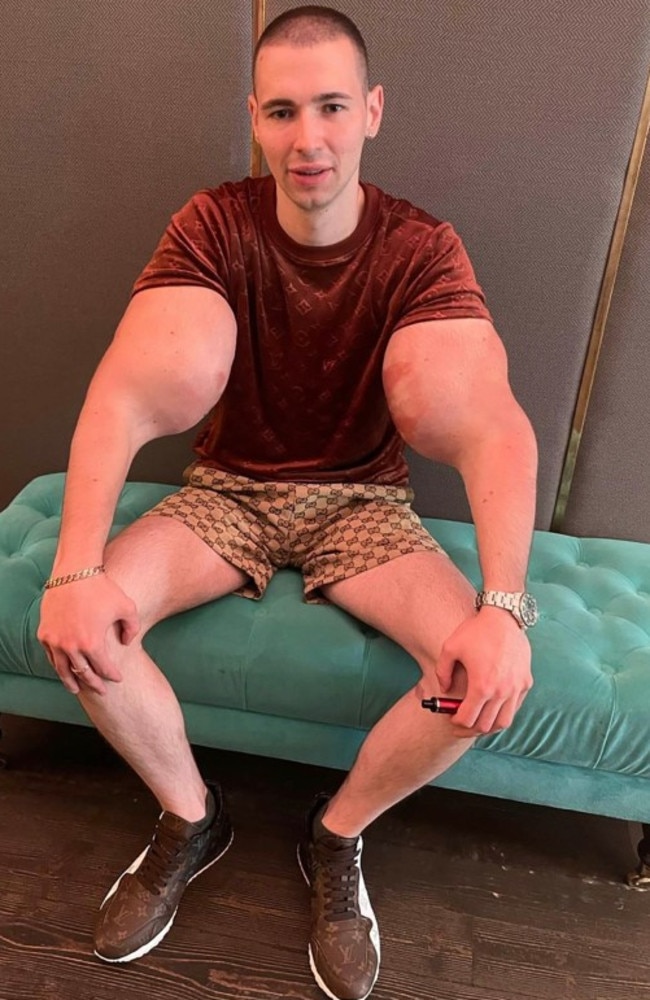 He admits he has to “get rid” of his self-inflicted “nightmare”.

He confessed: “I bulked up my arms when I was 20 due to my own stupidity. I did not think about the consequences.”

I'm sure his new tattoo will be nice after the blob is removed. On a side note, the tattoo on his chest isn't too bad. It's interesting, and appears to be well done. 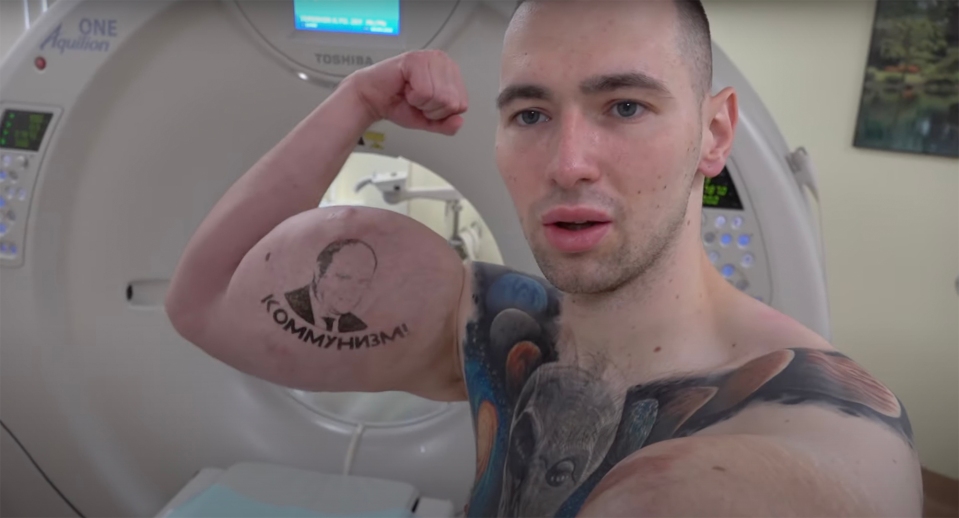 “God forbid something happens to this nerve and I cannot move my arm.

“I really worry about this. I am very afraid ….I should have thought about this earlier, I know. I blame myself, I know I’m guilty.”

The things people will do to keep/gain more 'followers'.


Doctors warned Tereshin risked losing the use of his arms after he injected himself with three litres of the petroleum jelly to create cartoonish, bulging muscles, and shared the footage with his 350,000 Instagram followers.


He has a nice little scar left behind after the tricep was removed. 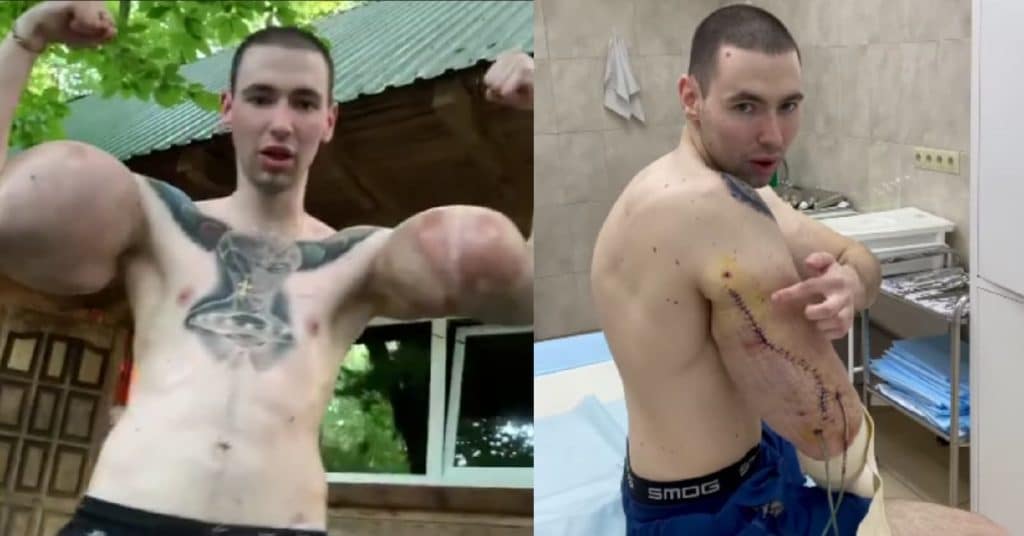 The six litres of petroleum jelly, named synthol, that has been injected into his body has saturated his muscles and penetrated the skin tissues and skin itself - meaning it blocked the blood flow and left Tereshin with a fever and pain.

'A toxic substance in the body long term can complicate the kidneys and lead to death.'

I think this↓ is from one of the triceps.


Holding the lump taken from one of his patient's arm, Dr Melnikov said: 'Here it is, scar tissue with fragments of muscles' 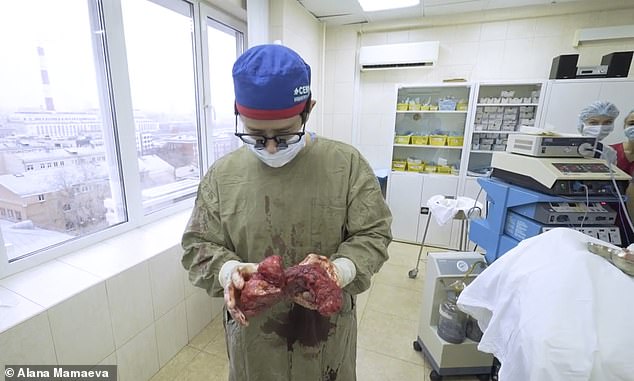 Tereshin was told he was 'lucky' that the damage had remained only in his limbs and not spread to the rest of his body.

'Petroleum jelly saturates the muscles, under skin tissues and the skin itself.

'All that has to be removed, but we need to keep the vein, nerves and other functions of the limb.'

'The jelly is not designed for injection, only external application.' 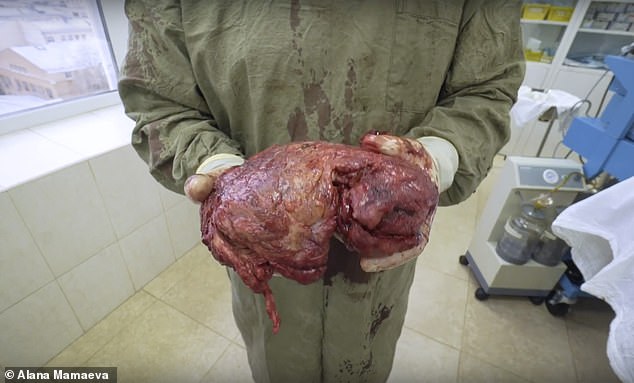 
I'm not real sure why I made a thread about this idiot. I just thought it was unusual and amusing. Also, I'd like to officially nominate this fool for a Darwin Award.

I appreciate the thread!
Great example of what not to do, however obvious it may be.
A good distraction, too ... Just as insane as the rest of the world, but not just the same nonsense over and over again.

posted on Sep, 20 2021 @ 04:59 AM
link
I've seen pictures of guys with crazy-looking biceps, and always figured they were photoshopped. After reading your thread, I'm like holy cow maybe there are some freaky-looking individuals like that.

Hopefully, the doctors are able to help him. It would be a shame if this young man lost his health to this vanity...


I wouldn't completely count him out yet though.
He may still qualify.

(Hopefully not. I'm not wishing it on him, but he's not out of the woods yet.)

Wow. This is even worse than the girl who sprayed Gorilla Glue on her weave.

In most countries a plastic surgeon would remove the problem to minimize the scarring but in Russia they insist on extra scar tissue so everyone knows for sure youre an idiot.

I can't say I disagree with the Russian method.

It wasn't me. It was the vodka! 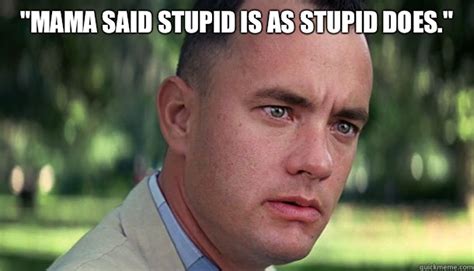 Jesus….that’s all I can say.

originally posted by: Wide-Eyes
a reply to: BrokenCircles

Wow. This is even worse than the girl who sprayed Gorilla Glue on her weave.

that sh!t didn't move! She got exactly what she was looking for. She was just a little short in the "vision" department.

Those arms combined with the total lack of pectorals is really killing me. How does one think this looks good ?

originally posted by: NHow1982
a reply to: BrokenCircles

Those arms combined with the total lack of pectorals is really killing me. How does one think this looks good ?

posted on Sep, 20 2021 @ 11:07 AM
link
Well, it is nice to know that the US is not the only country who has nutty people in it. It makes me feel better that this is not only a problem with Democracy. At least the guy didn't go through expensive surgery and hormone therapy to change his sex. or get breast implants to get bigger breasts or get injections in his nuts...Oh wait, maybe he might have injected some in his nuts too, if he did his arms, what is to stop him from enlarging other appendages.
edit on 20-9-2021 by rickymouse because: (no reason given)

originally posted by: Dalamax
He has to be dead to win a Darwin.

It's also technically not a Darwin if he's already reproduced.
edit on 20 9 2021 by tamusan because: (no reason given)

Welp, I'll be keeping my eyes open for Florida Man to try and top this... I know a few years ago a guy down here did filler injections into his penis and it went very poorly.