If you follow Fauci science this is your sciene:

I suspect point number 11 is: Profit!

I suspect point number 11 is: Profit!

Either that or try to kill the unvaccinated. Guns or aluminum bats preferable with mask on.

originally posted by: sciencelol
And yet they have a cure they have always known about in Ivermectin

posted on Sep, 16 2021 @ 06:51 PM
link
I understand that sometimes science can change, theories dismissed, hypothesis proved wrong, etc, but Fauci is someone who very very much enjoys the limelight.

For Christ sakes, a British paper recently named him a sexiest man candidate. He has changed his opinions on science in ways that primarily confirm the way the political winds are blowing.

Most academic scientists and it appears largely despite his Doctoral title and specialisms that his career has mostly been as an administrator of others funding and work, largely avoid the limelight but Fauci can pose with the best top models with plenty of photo shop touch ups.

Perhaps not entirely his fault as the media has touted him to the current pedestal he resides from; and political forces have used him more than a French prostitute. However as a claimed man of science he should have known better and instead of moving with political winds he should stick to the science and stop pandering

Either that or try to kill the unvaccinated. Guns or aluminum bats preferable

From my understanding, Covid doesn't use guns or baseball bats.

In fact, pretty sure Covid doesn't.


originally posted by: sciencelol
And yet they have a cure they have always known about in Ivermectin

I wouldn’t trust a scientist with a bag of broken babies let alone a doctor. 🧟‍♀️ 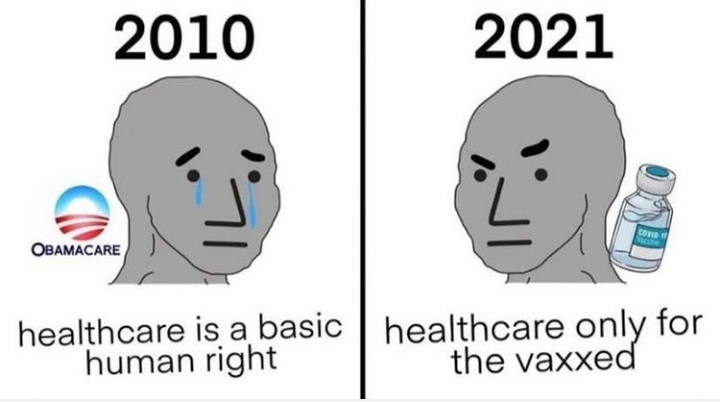 
originally posted by: sciencelol
And yet they have a cure they have always known about in Ivermectin


I find it interesting that you apparently think that mass murder/genocide is funny.

Your momma must be so proud...

originally posted by: sraven
herd immunity
must always have another booster


There's a few celebs who have been coming out on Telegram and questioning the narrative. Mel Gibson, Sylvester Stallone, Denzel Washington, Kirstie Alley, and now Tim Allen: 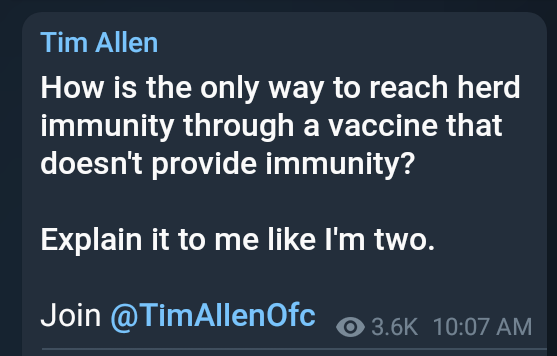 I'm sure the cancel army will be coming after them soon.