If you Don't like Fast Food Get Another Job

How often did people say that those jobs were entry level and should not be long term.
Well it looks like people listened.

Yes some people are lazy and are just hanging around with covid benefits, but it isn't the bulk of people.

There are several things that happened that nobody wants to admit.
Trump did something I think was really good. He boosted the economy and restricted the amount of illegals and people on work visas.
This has a profound effect on all kinds of industries. Then Covid hit. We all know how that went. Back to Trump, I've heard many say that
Mexicans were stealing our jobs, but what we weren't looking at all are the others in the other industries here on work visas. I think it was a lot more profound. Once they were gone, the lower level Americans started moving up a notch.

So here were are. Tons and tons of service and restaurant and those types of jobs and NOBODY wants to do them. Why would they?!! Would you work fast food, or something much more pleasant for a lot more money?!!
Every single day I read about a business closing because "people don't want to work". I think that is very disingenuous. I think people want to work, they just don't want to work fast food or service jobs, and to be honest I don't blame them. Something else has happened in the last few years. Customers
have gotten worse, much worse. I worked customer service when I was in college and it was bad, but it is nothing, absolutely nothing compared to what people are dealing with now. I know a lot of college students and I hear some crazy stuff. My own kid has been harassed at work in ways that makes me want to slap some people.


'No one wants to work': Beloved Winter Park BBQ restaurant closing due to labor shortage
"Despite paying more than any restaurant I am aware of, no one wants to work. We closed our Winter Park store with a whopping four employees. We were closed two whole days per week as well as two half days. It wasn’t by design, it was simply due to the fact we have no staff and can’t find any. Yes, d--- you pandemic and the political machine for making more appealing to not work than to be an active part of the workforce in our country. It’s pathetic,"

I think it is much easier to say people don't want to work, than to say the truth. The service industry needs massive reform, either through automation, a different pay structure, or it will become obsolete. There are places in the world where small stores no longer have workers and things like that. I have a feeling we are going to see some sweeping changes. We might still have restaurants, but they will be much more expensive. I wonder if tipping will go away and we become more like Europe.

Woot, got another one!!

I wanted to add, I've noticed that in my area a few parents have posted looking for jobs for their teens and always say "no fast food". Isn't that interesting. Weird that parents are posting, and also interesting they don't want little Timmy being yelled at by a Karen or Ken!

P.S. I know a lot of nice Karens, but Kens suck!

I can't blame people for wanting to get out of restaurant work. I personally know a handful of previous restaurant workers who used the downtime to pursue certificates or to finish degrees.

That's weird about the parents stating no fast food jobs for their teenagers. Taco Bell was decent spending money for me in high school, but I had no bills to worry about.

Your OP looks weird, too. Replies are normal and so are other threads. 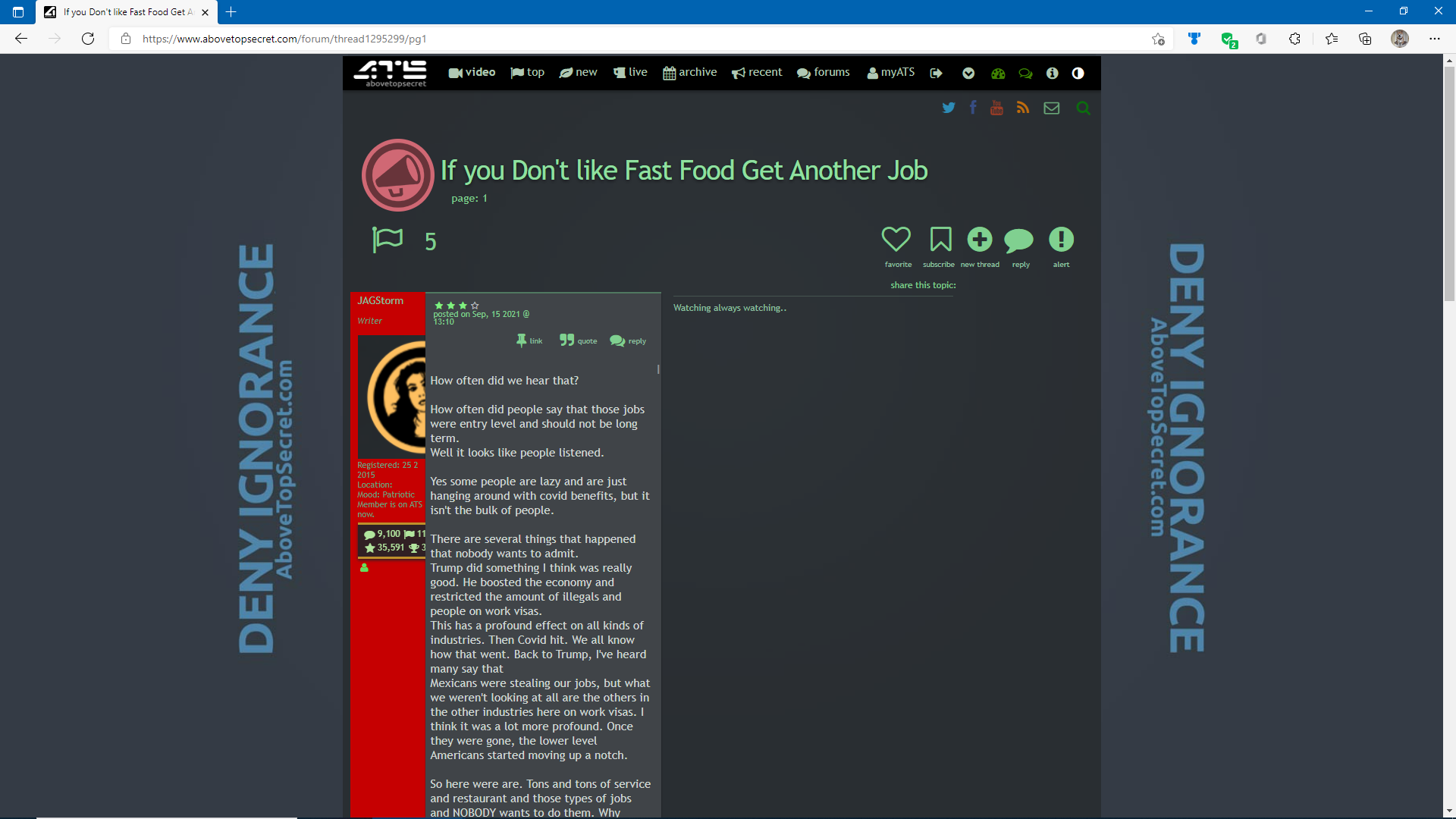 I think I hit enter too early and it did something weird to truncate it.

I can't blame people for wanting to get out of restaurant work. I personally know a handful of previous restaurant workers who used the downtime to pursue certificates or to finish degrees.

I know, a young lady I know just quit and got a job paying 7 dollars more an hour! To a young person that is a lot of money. She is so excited. She worked at the same restaurant for 4 years and the last straw was they were hiring new people for more than she was making. She quit and they were so angry and yelling at her (I guess a tactic that works on some).

posted on Sep, 15 2021 @ 03:41 PM
link
I'm going to disagree about people not wanting to work in only the restaurant industry. ALLLL the manufacturing is hurting. I work in the restaurant industry and we are having a heck of a time getting product. I also can't get help in the restaurant even though we increased our wages by $5.00 an hour. I also work at a school which is being remodeled. The contractors are way out on their completion date because they can't get employees. Help wanted signs in every single industry.

I just heard Amazon will pay $18.00 an hour, pay for college education as well. The farmers around my area also having a hard time.


The farmers around my area also having a hard time.

There was a farmer here looking for workers, heavy labor type of work, offering $11 an hour.
Needless to say, they might be shutting down soon!

Anywho, I am a worker in my 40's. The company is sending me to training, and they bumped me to 65k a year and full benefits, plus many perks. It is paying better than my last engineering job.

The amount of workers...adults included, who don't show up or just stand around astounds me. Many wont take more than 10 or 15 hours bc it would mess up all the "free government money". It actually makes me sick.

I am afraid we have lost this country, and arelosing are freedoms. I think we are over the cliff, we just haven't hit the boulders yet.

Almost makes one reconsider "A Day Without A Mexican" (or insert your preferred minority) !


So, now many middle class (or formerly middle class) Americans are having to ask themselves, "Which is more important, a worker's immigration status, or send my business (and my family) into bankruptcy?".

So I guess if you have been saying to them to get a better job and now you are mad that your fast food takes too long to get, congratulations, they took your advice.


There was a farmer here looking for workers, heavy labor type of work, offering $11 an hour.
Needless to say, they might be shutting down soon!

posted on Sep, 15 2021 @ 04:27 PM
link
How about a job, no education needed, where guys are making $20k or more twice a month?
Do the math for 12 months.
Employers are crying for workers. In this industry, commercial fishing, a dangerous job already it is 10 tomes more dangerous to go out short handed.
And they can’t get men, ahem, boys really 🙄 to work.

Would you work fast food, or something much more pleasant for a lot more money?!!


The thing is, many people that agree with this loaded question, are not qualified or enthusiastic enough for that good paying job. First, this theoretical better paying job needs to be available.

Then I believe, if the situation is dire, a job means money. The other side is, it does not look good in a resume if one can't explain dozens of different job entries in a short time with a sentence like in the next paragraph.

At my former employee I partook in a few job interviews as a sidekick. Those that answered the question "Do you have any other job inquiries currently" with answers like "Yes, I do not just want to work anywhere" and knows a bit about the company shows that the person is seeking identification through the job. Those get a better chance than someone just looking for any work. Pride is a factor here, with that comes responsibility.

That again leads me to fast food jobs. Depends again on the type, like drive in or food truck. But all over, my opinion is, if one takes a job, it should be proper done. No arguments. The payment was known upfront and is not an excuse to half ass something. I see this as a self feeding circle. "Why should I pay those heathens more? No enthusiasm, no pride, therfore bad work quality. This is the other side of that coin.

Because that's the quality you get when people just slave through their day taking shortcuts, instead of having pride in what they do. I agree with you very much on the customer problem. I feel from what I get through media, it's more rampant in the US, because stupid behavior like gulping down boiling coffee, was rewarded. Entitlement, a problem of my generation, too.

I mean, if I listen to others fast food orders that sound more like commands than giving up a food order to a person, I think my part. No thank you or please. No hello and it's said in a rude tone. I would have a hard time staying friendly all day to such people. That's why I always say please and thank you, hello and goodbye and do not let out my frustration about whatever on the people there. And very seldom there is something wrong with my order.

It's also appetite enhancing for me, when I get my food from a smiling person instead of from a grudged person.

It's usually at the bottom of her posts in the signature space.

originally posted by: glen200376
a reply to: tamusan
What's with the 'watching always watching' at the right hand side of her messesd up post?
Creepy.


That's my tagline, something weird happened with my OP

I had a post do that to me the other day too. No amount of fiddling with it would change it. There must be some invisible control character which causes that, but I'll be darned if I could figure out what it was.

posted on Sep, 15 2021 @ 05:43 PM
link
Fast food is not going anywhere due to the flood of illegal aliens. They don't need vaccines, healthcare, minimum wage and don't care about politics, jury duty. None of it. They are pretty good workers too. Way better than American kids and absolutely better than early release criminals and recovering drug addicts. They are the best low skill workers in the country.

originally posted by: Stupidsecrets
Fast food is not going anywhere due to the flood of illegal aliens. They don't need vaccines, healthcare, minimum wage and don't care about politics, jury duty. None of it. They are pretty good workers too. Way better than American kids and absolutely better than early release criminals and recovering drug addicts. They are the best low skill workers in the country.

They better hurry up because it is getting dire over in my area!