Borders of Europe by haplogroups

posted on Sep, 14 2021 @ 03:07 AM
link
As the founder of the comparative typological method in folklore, one of the founders of modern text theory, Professor Vladimir Propp, wrote,


"Genetic research is necessarily, in essence, always historical, but it is still not the same as historical research. Genetics sets itself the task of studying the origin of phenomena, history is the study of their development. Genetics precedes history, it paves the way for history."

Let me clarify that a haplogroup is a group of similar haplotypes that have a common ancestor in which a mutation has occurred, inherited by all descendants (usually single nucleotide polymorphism). The term "haplogroup" is widely used in population genetics and genetic genealogy, a science that studies the genetic history of mankind by studying the haplogroups of the Y chromosome (Y-DNA), mitochondrial DNA (mtDNA), and the MHC haplogroup. Genetic markers Y-DNA are transmitted with the Y-chromosome exclusively through the paternal line (that is, from the father to his sons), and mtDNA markers - through the maternal line (from the mother to all children). Thus, men are carriers of Y-DNA and mtDNA markers, while women - only mtDNA. Haplotypes for autosomal markers are presented in both men and women.

According to the map, residents of most of Western Europe, plus some Scandinavian countries, are carriers of the R1b haplogroup DNA, which, according to the same map, is common with the inhabitants of modern Armenia.

It should be noted that the color map is, of course, illustrative, but not complete due to the fact that the information of interest to us regarding, for example, Turkey and Azerbaijan is by no means monochromatic, as shown on the map.

Brilliant Maps sitemap. mainly focused on Europe. For comparison, you need to look at the modern Genetic Atlas of the history of human impurities, where it is clearly seen that there is practically no information on Azerbaijan and many peoples and tribes of the North Caucasus, and on Turkey it is constantly updated. 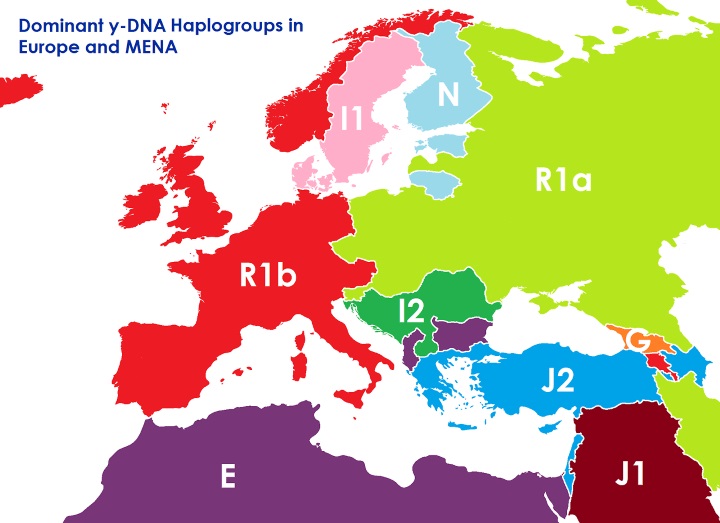 The map above shows what the borders of Europe, the Middle East and North Africa might look like if they were based on the dominant Y-DNA haplogroup rather than ethnicity and/or any other political considerations.


Here’s some very basic information about each group:

Haplogroup R1b: “It is the most frequently occurring paternal lineage in Western Europe, as well as some parts of Russia (e.g. the Bashkir minority) and Central Africa (e.g. Chad and Cameroon). It is also present at lower frequencies throughout Eastern Europe, Western Asia, as well as parts of North Africa and Central Asia.”
Haplogroup R1a: “It is distributed in a large region in Eurasia, extending from Scandinavia, Central Europe and southern Siberia to South Asia.”
Haplogroup N: “It has a wide geographic distribution throughout northern Eurasia, and it also has been observed occasionally in other areas, including Southeast Asia, the Pacific, Southwest Asia and Southern Europe.”
Haplogroup I1: “The haplogroup reaches its peak frequencies in Sweden (52 percent of males in Västra Götaland County) and western Finland (more than 50 percent in Satakunta province).[6] In terms of national averages, I-M253 is found in 35–38 per cent of Swedish males, 32.8% of Danish males, about 31.5% of Norwegian males and about 28% of Finnish males.”
Haplogroup I2: “The haplogroup reaches its maximum frequency in the Dinaric Alps in the Balkans, where the men are on record as being the tallest in the world, with a male average height of 185.6 cm (6 ft 1.1 in).”
Haplogroup J1: “This haplogroup is found today in significant frequencies in many areas in or near the Middle East, and parts of the Caucasus, Sudan and Ethiopia. It is also found in high frequencies in parts of North Africa, Southern Europe, and amongst Jewish groups, especially those with Cohen surnames. It can also be found much less commonly, but still occasionally in significant amounts, throughout Europe and as far east as Central Asia and the Indian Subcontinent.”
Haplogroup J2: “It is found in Western Asia, Central Asia, South Asia, Europe and North Africa, but it is usually associated with Northwest Asia. It is thought that J2 might have originated between the Caucasus Mountains, Mesopotamia and the Levant.”
Haplogroup E: “Most members of haplogroup E-M96 belong to one of its identified subclades, and the E-M96(xE-P147, E-M75) is rare. E1a and E-M75 are found almost exclusively in Africa. By looking at the major subclade frequencies, five broad regions of Africa can be defined: East, Central, North, Southern and West. The division can be distinguished by the prevalence of E-V38 in East, Central, Southern and West Africa, E-M78 in East Africa and E-M81 in North Africa.”
Haplogroup G: “At the level of national populations, G-M201 is most commonly found in Georgia; it is found at even higher levels among many other regional and minority populations in The Caucasus. G-M201 is also widely distributed at low frequencies, among ethnic groups of Europe, South Asia, Central Asia, and North Africa.”

Of course, after all, a 4-year-old child, apparently like you, does not know that there is genetics and science in general))))

Why, then, is the unification of Russians, Chinese, Koreans not just?

Come on, RuskyDoll, I like your drawing. Will show it to dad when he be back from the office.

What would they prove? Nothing.

That said I always read RT's posts regardless of I agree or not he makes you think, plus if he/she/they are indeed Russian, it's ironic because for my generation the Russkies were the boogieman. The government spent billions to defend us from the Red Menace, and ultimately they are probably more like us than a lot of our "allies".

Not to mention every eastern European or Russian I've ever met seemed to be really intelligent, hard-working, and thoughtful people.

Okay, this looks interesting but it isn't the right time of day for me to dive into it.

I don't think in terms of 'fairness' when it comes to history and political geography. "Fairness" is a perception informed by a given point of view, not an objective description of a situation.

I don't think in terms of 'fairness' when it comes to history and political geography. "Fairness" is a perception informed by a given point of view, not an objective description of a situation.


From the point of view of a believing person, and there are most of them in the world, laws are subjective, they are from a person, and justice is objective, it is from God.

And even more subjective concepts such as history and political geography. Plenty of room for double standards.

Genetics is objective, since it does not depend on different interpretations of history, or on the political predilections of different people.

posted on Sep, 14 2021 @ 06:57 AM
link
So when I look at Europe, R1b
Does that mean that the dna variation is found both in locals and those with different origins? Since I think almost 40 % op the population in West Europe are those of the second group, most are 3rd generation.


That would make sense because, party because of the wars and the political systems, the people of those two geological locations (red and greens on the map) did not interact as much with each other, so it would make sense that the specific dna mutations kept on one side of the border. so to speak