Big Tech Wants You to Live in a Virtual World. Prepare for Real Problems

Heard of the “metaverse” lately? It has been hard not to.

Facebook FB 2.02% Chief Executive Mark Zuckerberg mentioned tech’s latest buzzword 16 times on his company’s most recent earnings call last month. The future of Facebook, he said, is a metaverse—a virtual environment where you can be physically present to hang out, play games, work and create.

But he didn’t coin the term. Tech companies ranging from Intel Corp. INTC 1.33% to Unity Software U 2.33% talked up the metaverse last year. And Microsoft CEO Satya Nadella discussed the “the enterprise metaverse” in his company’s earnings release last month—a day before Facebook’s call.

Nvidia has been an especially loud proponent of the idea. Last year, the company launched a platform called Omniverse “for connecting 3-D worlds into a shared virtual universe.” Chief Executive Jensen Huang used the company’s largest annual conference in October to publicly credit Neal Stephenson’s 1992 science fiction novel “Snow Crash” as the original inspiration for the concept of a virtual reality successor to the Internet, noting “the metaverse is coming.”

But visions for the metaverse go well beyond gaming. Facebook gave a peek of this last week, with an “open beta” test of its Horizon Workrooms— essentially, a virtual reality workspace using its Oculus Quest headsets. Mr. Zuckerberg reportedly dropped into a few demos himself—joining journalists as floating digital avatars without legs. The impetus behind the service after 18 months of pandemic-driven lockdowns seems sensible enough: Working remotely without colleagues can feel isolating, and brainstorming with others doesn’t feel the same if you’re not in the same room.

But a world through VR also has plenty of drawbacks. For many, the experience can be hot, sweaty, and even nauseating. Even the popular Oculus Quest 2 has drawn complaints for its foam face pad insert that makes users’ faces red and itchy. Real world hair and makeup are frequently compromised. And much like social media itself, there is still ongoing debate as to whether prolonged use of VR is physically safe—especially for children whose eyes are still developing. Plus, there’s simply the weirdness factor for many: The percentage of the population keen to strap a device to their faces in order to interact with cartoon-versions of co-workers and friends is likely limited.

The main problem with VR is, it isn't immersive enough yet. It's a novelty. You put on the clunky headsets and ride a few rollercoasters or visit space and it's fun at first but it's nothing earth shattering.

It's a good idea but there's also negative consequences.

Imagine living in a metaverse where superheroes exist and your Batman . It could get crazy especially as A.I. and quantum computers make it so you can create exact simulations of the universe. Will the simulated beings know there simulated? They will think they're real just as we think we are.

You could bring people back to life so to speak in a simulated environment.

This will be interesting if we don't blow ourselves up first or die out from biological warfare.
edit on 27-8-2021 by neoholographic because: (no reason given)

posted on Aug, 27 2021 @ 12:05 PM
link
There comes the metrix, the future of humanity babies born in capsules to power the machines, while living a dream in la, la land.

originally posted by: marg6043
There comes the metrix, the future of humanity babies born in capsules to power the machines, while living a dream in la, la land.

If you change the babies into souls, the capsules into bodies and the machines into archons. Then you have one of the gnostic views of creation and the original seed source idea for that entire trilogy.

Bruce Willis was a in a movie that explored this... 2009 or so. It was called Surrogates.

Bruce Willis was a in a movie that explored this... 2009 or so. It was called Surrogates.

Also I think the Sci-fi 'Anon' with Clive Owen called it the metaverse.

I must watch surrogates again 👍🏼

posted on Aug, 27 2021 @ 12:26 PM
link
Economy within the economy immediately turned me off to this idea. Why the actual hell would i want to work a virtual job when i have a real job? Aren’t these things supposed to be fun?

The stupidest idea for anything i ever heard ever. And i rather enjoy my job.

If you want to make a full immersion vr video game like better than life from Red Dwarf i’m all for it. Not all of us will wish we had 4 kids and a mortgage like poor old Arnold Rimmer. Don’t ruin it for everyone by making me do the state budget and meet with boring old clerics in “The Ottoman Sultan and his Forbidden Harem”

It already exists as well. It’a called Eve Online. You can work a second job (quite literally) as a spaceship captain, your pilot lives in a pod filled with goo as well for added immersion. I figure you can get it to work with a headset if you really wanted to.

Seriously though, i believe the holodeck, or the full immersion pod, or whatever form it takes, will be the last invention mankind ever makes.

Not true... VR can be Very immersive... it just depends on what you're playing

its not just a novelty anymore... and yes the headsets can be heavy but theres solutions to that... and they're getting lighter

They're getting better for sure. But what if it wasn't something you wore on your head but instead a small room you were physically present in like the VR on Star Trek where they go for relaxing or practice fighting skills. I really like my Oculus. It's surreal and fun but I did find out I suffer from motion and air sickness lol.

Just think though. We could save the planet. No more litter at the beaches or trash in state parks. We wouldn't need as many clothes, no makeup or hair-dos etc. Live in sweat pants and t-shirts, fart in our rooms and eat artificial vitamin fortified bon-bons. AND WE WOULDN'T HAVE TO WEAR MASKS OR GET VACCINES!

Yeah, Surrogates. That movie was something else. A little trippy to say the least.

"We are the Borg.... We will add your biological and technological distinctiveness to our own. Your culture will adapt to service us. Resistance is futile."

"Human! We used to be exactly like them. Flawed. Weak. Organic. But we evolved to include the synthetic. Now we use both to attain perfection. Your goal should be the same as ours."

Holodeck save and exit please. Holodeck exit. Holodeck arch! Computer arch!.......
edit on 8 27 2021 by beyondknowledge because: (no reason given)

posted on Aug, 27 2021 @ 01:08 PM
link
Okay, I'll get in my virtual car and drive to the virtual store to get virtual groceries so I can virtually starve to death. And when it rains I'll pull out my virtual umbrella to keep my virtual reality goggles from getting wet while I run inside my virtual house where my virtual wife will be virtually pregnant with my virtual son.

posted on Aug, 27 2021 @ 01:09 PM
link
On the bright side, in a virtual world fast food will come to us looking and tasting as good as it appears in the adverts and there will never be an over-cooked steak again

I'll just leave this here from 1983. The idea has been around for a long time. Oh btw, what kind of wood doesn't float?

The Metaverse is a collective virtual shared space, created by the convergence of virtually enhanced physical reality and physically persistent virtual space, including the sum of all virtual worlds, augmented reality, and the Internet

The problem with this concept is society using it to escape the real world without learning from the lessons that are manifest in the very relevant economic, biological, and sociological obstacles that we are trying to escape from. There is no escape, only recreating those obstacles through a digital medium. What this environment actually creates is a more comprehensive device to control our "reality" and permit or disable basic services on a privatized basis aka violating the user agreement. To put it another way, there are no Constitutional rights in the metaverse. Consent to the terms and conditions, and all your privileges are up for grabs.

On a more existential level of conversation, here's a pertinent quote summarizing the value of traditional reality vs some grandiose software facsimile.

I was afraid for all my life, right up until the day I knew my life was ending. And that was when I realized that... as terrifying and painful as reality can be, it's also... the only place that... you can get a decent meal.

- James Halliday in Ready Player One

Zuckerberg and all his tech savvy business moguls can go stuff it. Build a better society on planet earth instead of a virtual paradise that sidesteps the consequences of our poor judgment and reckless behavior.

Ironwood. So dense and heavy it sinks in water.

I used to think that a family member made really bad decisions. Every time she made IMHO a stupid or unbelievable life decision, I thought that she needed to wake up and smell the coffee, what was she thinking, that'll never work, blah, blah, blah. But for HER, it freaking did. Even if it didn't immediately, it did in the long run. So, I learned a lesson that her reality was relevant to her life and works for her. But not to mine nor others in the family. None of us could understand it but it is what it is.

Maybe the life lessons I've learned aren't relevant to others, especially younger people these days. The older I get the more I realize that many things I thought were so important are evidently not. People are surviving quite well. Now if reality throws a big ch#t bomb in the form of say a life altering event or a major natural catastrophe, people adjust....to their new reality. If metaverse is part of their reality then so be it. Having 'virtual' reality incorporated in 'real' life is simply a 'new' reality.

It does seem these days that there is a lack of depth of reflection and deep thought but that's the reality of life for many at this time. In fact I know someone who is 'simple' minded and lives their life quite normal and competently with seemingly full quality. I am thankful sometimes that a simple mind has not been my gift in life. But other times, I wish it was lol.

Yeah I know I'm rambling but it's one of those circular conversations that could go on forever.

Not true... VR can be Very immersive... it just depends on what you're playing

its not just a novelty anymore... and yes the headsets can be heavy but theres solutions to that... and they're getting lighter


Its not the headset thats the problem. Its the lack of tactile interface.

Well worth a look if you have not seen it yet.

posted on Aug, 27 2021 @ 10:29 PM
link
Wouldnt the correct term be a Digi-verse, instead of a Meta-verse since it digital, while the Meta would be along the lines of self awareness or conscience, while spatial.
edit on 27-8-2021 by Proto88 because: (no reason given) 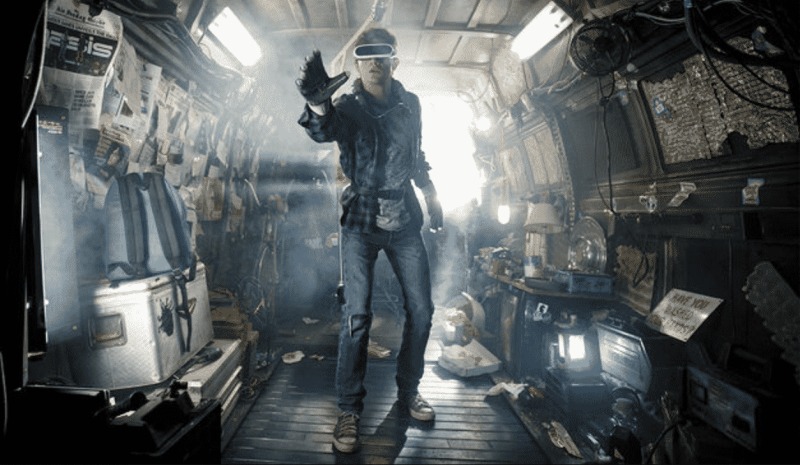 Jon Radoff, CEO of Beamable and formerly mobile developer Disruptor Beam, has attempted to map out the companies that have either expressed an interest in the metaverse, or at least could be argued are connected to it, which is extensive to say the least.

Link includes on a 92 page slide presentation on "Building the Metaverse."

Thanks for the link. Very informative.