originally posted by: Jagman72
Long time lurker here. At this point, I have to wonder if the Biden administration set off this bomb. It would give them an excuse to abandon the rest of the civilians. I hate thinking this way, but you can no longer trust the US government. I miss the 80's!

I agree you can't trust the government, any government, even the Reagan government. In 88-89 the US State Department was selling weapons to Saddam. They were sent to France to make it look like they came from there, then they were shipped to South Africa. Once in SA, they were inspected and G5 cannons were added to the shipment to make a little extra profit for Pik, Magnus, Andy and Jordaan. The whole thing was handled and inked by a guy named Perkins at the Oliphant Game Farm in Kruger, we did fly them there lol. Meanwhile the CIA in Baghdad were stroking Saddam telling him that Kuwait was really his and he should take it while saying the US were behind the plan. Otherwise, they said, why would they, the US, have restocked his armory starting in 1988? I was there for that too, until I quit because of the insanity of it all.

You can't trust any government ;-) Apart from that, Biden needs to be court marshaled along with Harris plus all his advisors/handlers and sent to at least Gitmo.

Yeah, I miss the 80's too.... The smell of cordite with my morning coffee, not being able to smoke as it was like a red flag in the bush and of course looking down the scope on an M82 and the feel of belt fed weapons. Wasn't there a song..... Ahhhh, those were the days my friend, I thought they'd never end.... Or maybe White Hot by Red Rider ;-)

Succinctly put. There's much that my Gen Xers don't remember from our mollycoddled youth. I grew up on a diet of BBC 'event news' at 6pm every evening, our dinnertime. Aged 9 I was watching scenes from Tripoli and Pripyat, then came the USSR shambles followed by it's swift demise. I finished my Findus Crispy Pancakes and went back to my Big Track and Scalextrix, before the Gulf War I forced my parents to finally utter the words 'war means many, many people dying.' I was too drawn in by the F117 and the TV bombings from the handily placed war-cams. Then I grabbed my bike and peddled off into a broken era.

Now, Reagan & Thatcher seems like a golden time, even though I hated them both. But I had a childlike - because I was a child - trust in them. Let's hope kids don't grow to trust Biden and Boris.


originally posted by: Tarzan the apeman.
a reply to: carewemust

The prez can't speak until they pump him full of teleprompter reading juice. Also, the handlers need to figure all the right words that need to be said, and I'm sure it won't come from the heart. And if he takes questions they will need to have a list of who he is to call upon. This is BS. This whole debacle is BS.

RIP to those who gave all.

I'm pretty sure they're pumping Biden full of something to make him somewhat lucid for a couple of minutes so he can read his pre-scripted messages off the teleprompter. He never sticks around to answer questions because he can't risk the drugs wearing off while he's on camera.
We've seen videos of Biden in unguarded moments -- the guy's a nursing home patient who doesn't know where he's going.

I made a meem for that. 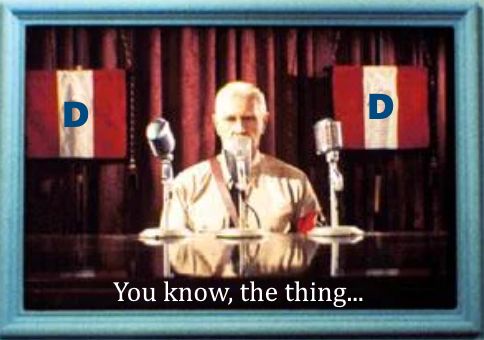 originally posted by: AndyFromMichigan
a reply to: deviant300

Zero Hedge is saying that there are reports of up to FIVE explosions now.

bidden needs justifacation to put in a very big army and take over totaly!
so it will be a US controled country.
So much money THEY can make with the blood of US people!

When I say "Pearl harbor"
i mean the US let or incouraged the enemy to attack a US target,
so they would be justified it what they do next.

posted on Aug, 28 2021 @ 01:59 PM
link
I'll just leave this here. Up to You, conspiracy realists, what to do with this.
I present to You someone, that the United States needs as a president. Hell, even my sh!thole country needs a leader with a steel backbone.
Ladies and gents - Jocko Willink.


Also, this came out Before the sh!t hit the fan in Afghanistan.

posted on Aug, 29 2021 @ 12:34 AM
link
a reply to: IAMTAT that's a little extreme. This whole country was built upon countless deaths of others. Same goes for every president. I didn't vote for him but when you get to that level they all orchestrate massive amounts of death and it comes from both sides.

posted on Aug, 29 2021 @ 12:36 AM
link
a reply to: HairForceOne Then we didn't Didn't have a David. David was a badass and also an great and eloquent leader that his people loved.