page: 1
13
log in
join
share:
JIMC5499
+5 more
posted on Aug, 24 2021 @ 07:26 AM
link
We keep being told that the 2020 Presidential Election was secure and legitimate. Right now there is a Recall Election going on in California. Police arrested a man who was passed out in his car. They found a gun, drugs and 300 Recall Election Ballots.
ktla.com...

Two women were caught on video opening a mailbox with a USPS master key and removing Recall Election Ballots from it as well.

With things like this going on can you REALLY tell me that the 2020 election was secure?

Next to that has anyone ever believed that 80 million people voted for biden?

Look at trump when he spoke tens of thousands came to see him, to many to host on any event, roaring crowds. How come that never happened with bidden ? Because those people simply do not exist.

posted on Aug, 24 2021 @ 08:15 AM
link
Biden supporters are like those Russians for the 2016 election. We all know they were made up. The only person to ever identify as a Biden supporter that I know of is Phage here on ATS.
edit on 24-8-2021 by Middleoftheroad because: (no reason given)

I worked the Trump rally in Butler, Pennsylvania last October. Never seen that many people in one place before.

posted on Aug, 24 2021 @ 10:31 AM
link
Newsom is putting out to vote no on his recall and leave his replacement blank.
This might be a clue to how the democrats cheat on this election

This is a very risky move as it's likely if he does get recalled a Republican will replace him.

Since this is the only thing on the ballet, I wonder how many democrats will even take the time to vote.

Also, a lot of people are getting a ballot envelope with holes punched in it where someone could put a endoscope into see how they voted.


Man they are desperate... 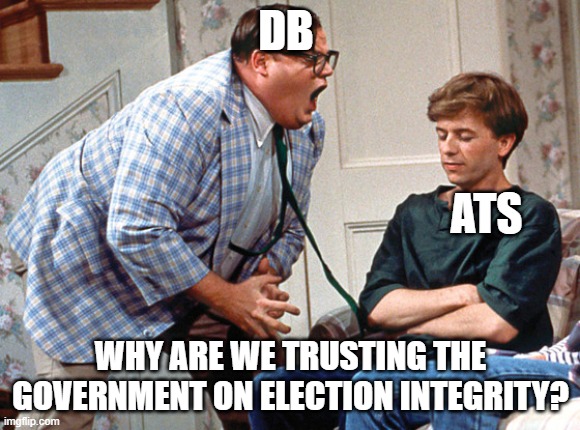 This is why it is important to film this acts and get action on them quickly.

I think the fraud only works if the election is a close one. It won't work if the gap is too large.

The reason Newsom fears this recall is because he know he doesn't have the numbers to effectively trigger the fraud.

So, expect some shady dealings.

originally posted by: matafuchs
Haven't heard "Vote for none of the Above" since Richard Pryor in Brewsters Millions...ROFL...

Nor have we heard a Vote for "Change That Wont Matter!" like these guys tried awhile back...

Larry Elder is in the lead in the polls and there are Elder campaign signs everywhere. I have not seen any other signs, except ‘Recall Newsom’. Nobody else.

Every single signature on the petitions was hand validated. It took months.

Lets have a look at my automatically mailed ballot, that I didnt request: (it arrived torn, with the barcode exposed, grrrrrr)

There is only one issue on the ballot. On the front side, it asks if we should recall Newsom, yes or no. the fold falls right between the two answers. Now turn it over. So many names of candidates running for governor! 3 columns wide on the long page. 46 names in all! (Interesting that they only allow 2 names in every other non-primary state election!) And there is a write in blank space! (Also not allowed in non-primary state elections).

46! The ballot is packed! They sued saying a simple majority isnt enough, someone has to win over 50%..I imagine that challenge will continue. There are mostly republicans on the ballot, many ‘no party’ identified, a few 3rd party candidates (one for each 3rd party, smart!) Few democrats, but one is a college student!

Larry Elder is near the end of the list. Bruce Jenner is center top, but is called Caitlyn, of course. Ive seen a pic of another county’s ballot where Elder falls on the fold, which will cause missvotes requiring hand validation. Mine has no candidates circle falling on the fold. I live in a Republican county.

The biggest problem I see is that the circle to be filled in for your choice is very far on the right of the candidates name, while very close on the left of your choice is the circle for the candidate in the previous column. The column boundary lines are faint so its hard to see what is correct. So, on my county’s ballot, David Lozano is going to get many of Larry Elders intended votes.

Ive also seen a demo where a pinlight can be shined on the envelope and the yes or no vote can be easily seen. Easy to dispose of those ones.

Hope this report from behind the lines isnt too long….